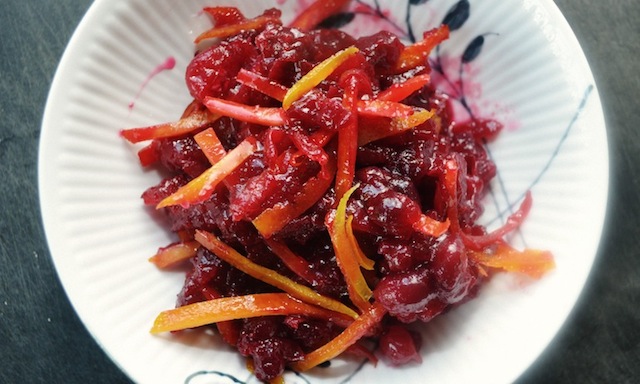 It’s usually about now that I begin scratching my head and exclaiming, is it really almost Thanksgiving? The answer, of course, is yes, a point driven home by the quantities of holiday-related ingredients suddenly on can’t-miss display at most markets. Chief among these, and one that never fails to capture my attention: the cranberry. Sure, jars of whole nutmeg and cans of solid-pack pumpkin have an undeniable Thanksgiving association, but for sheer home-for-the-holidays vibrations you can’t beat this tart little berry. Or maybe I just have a particular weakness for them.

Okay, scratch the “maybe” — I do have a weakness for them. I like the way they look and feel, all shiny and marble-sized, like miniature Christmas ornaments. But the true measure of the cranberry — and the real source of its magic — is what happens when they’re cooked down for a few minutes alongside a quantity of sugar and other ingredients (cloves, cinnamon, perhaps a little salt). It’s a process that miraculously takes the fruit from an inedible state to something quite wonderful: sweet enough to hold your interest; tart enough to cut through all those rich foods we’ll soon be piling on our plates. I love all those rich foods, but never as much as when I have a large serving of cranberry sauce alongside them. For that reason I always like to have a sizable quantity on hand this time of year; after all, you never know when someone might drop by bearing a roast turkey, or a dish of stuffing, or . . . well, you get the idea.

The following recipe for candied cranberries and orange is one of my all-time favorites. I make it every Thanksgiving and invariably triple it because you don’t want to run out — not when overindulgence is on the menu.

Directions:
—Combine 1 cup each of sugar and water in a saucepan and bring the mixture to a boil. Add the slivered rind of 1 orange and cook until the syrup begins to thicken, about 5 minutes. Remove the orange rind with a slotted spoon and place on a sheet of wax paper. Set aside.
—To the saucepan add 4 cups of cranberries, the cloves, and the cinnamon. Cook over low heat for about 10 minutes, or until the berries begin to pop. With a slotted spoon remove the cranberries to a bowl and continue cooking the syrup until it is thick (note: there may not be any left — if so, this is fine). If you can find them, discard the cloves and cinnamon. Pour any remaining syrup over the cranberries. Scatter the reserved orange rind on top of the cranberries and chill. 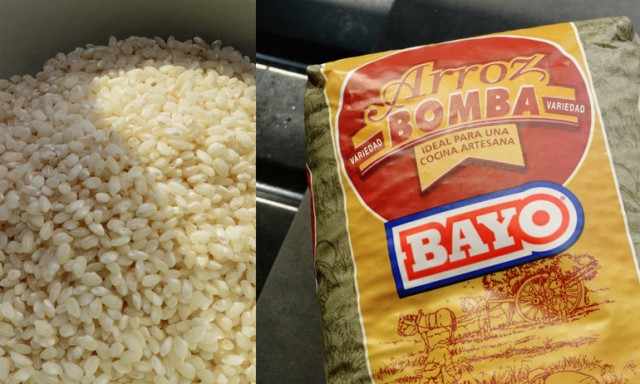 Here’s the thing about rice: you’ll probably never master everything there is to know about it. This may come as a surprise to those of you who, like me, grew up thinking that the question, “what kind of rice would you like tonight?” meant one of two possibilities — Uncle Ben’s white, or Uncle Ben’s brown. Okay, I’m exaggerating, but stand in the rice section of your local grocery store studying the various names listed on the packaging as I did recently, and you begin to get my drift. You’ll likely find the standard brown and white varieties, of course, but also others listed simply as “long-grain,” “medium-grain, or “short-grain,” as well as Basmati, Jasmine, and, if you’re lucky and your store’s a good one, a number of other types you’ve probably never heard of. The fact is there are more than a 1,000 varieties of rice to wade through.

The good news is that you don’t need to know much about most of those to master making dinner. But it is helpful to become acquainted with the five basic types of rice one typically cooks with these days. So for those of you who slept through Home Ec., (or were forced to play soccer as I was), here’s everything you need to know:

—Long-grain rice. The long and slender variety most of us are familiar with, as it’s the standard choice for side dishes or as a vehicle for sauces. Basmati rice falls into this category.

—Medium-grain rice. This is shorter and plumper than long-grain and works well in paella and risotto. Arborio rice falls into this group, as does a variety called Bomba, which a friend turned me on to recently. Because of its shape and greater ability to absorb liquid, this is the ideal rice for making paella.

—Short-grain rice. This variety is almost round and is the best choice for rice pudding. It’s also (not surprisingly) known as pearl rice.

—Brown rice. Because brown rice isn’t milled as much as white, it retains the bran and germ, which means it’s healthier than white, and takes about twice as long to cook. Brown rice is available in a number of varieties (such as long- or short-grain).

—Converted or parboiled rice. This is the basic white rice many of us grew up with. It’s available in medium-and long-grain, and, because it’s been steamed before it was husked, it’s more nutritious than the standard white. It also takes longer to cook.

—Wild rice. Despite the name, this is not really rice at all, but rather a grass seed. It’s richer in protein than standard rice, and has a more complex, nutty flavor. It’s also more expensive and takes longer to cook.

There’s plenty more, of course, (popcorn rice, puffed rice, Thai purple rice, not to mention the proper kind of rice to throw at the bride and groom when they exit the chapel) but in the interest of keeping you all awake, let’s leave those on an as-need-to-know basis. 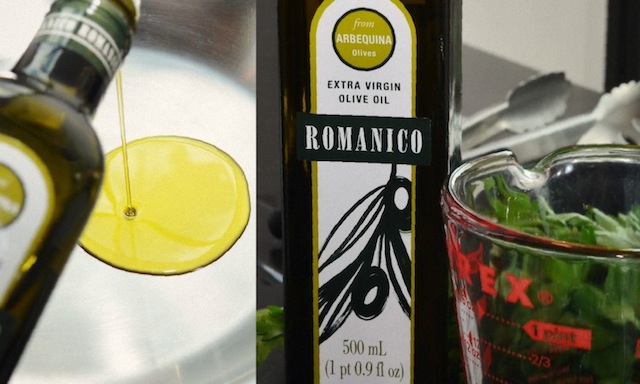 Where shopping for olive oil is concerned I’ve tended to focus on three main criteria: the price, the look and size of the packaging, and whether the words “extra virgin” appear somewhere on the label. I realize, of course, that this doesn’t say a whole lot about my olive oil acumen, but I’d also guess that I have some company here — even among experienced home chefs. I mean, how many people really know what the words “extra virgin” mean, other than that it’s something desirable? So I’ve vowed to shop with greater intel, and to share that info with you. Herewith, a quick primer: “extra virgin” means that the olives have been pressed to extract the oil, rather than heated or treated with chemicals. In other words, this is the purest grade and the best available, not to mention the healthiest.

It stands to reason then that this is the stuff you’d want to add to your mashed potatoes, use to dress your salads, or feature in olive oil-centric recipes like this one for spaghetti with green garlic and olive oil (though some would argue that for cooking purposes, plain old virgin olive oil is the way to go, as the flavor is less assertive). Still, even among extra virgins not all oils are created equal, so my best advice is to play the field and see which variety you prefer. I’ve been doing a fair amount of that myself recently, and this one from Romanico is a recent discovery and a new favorite. It’s a product of Spain and like many of the olive oils from that country it’s made from Arbequina olives, which tend to produce an oil with a nice greenish-yellow tint, and a pleasing peppery kick. I like it splashed on greens, but also in more complex dishes that call for a variety of strong flavors (see my recent posting for shrimp scampi). Give it a try and let me know what you think. 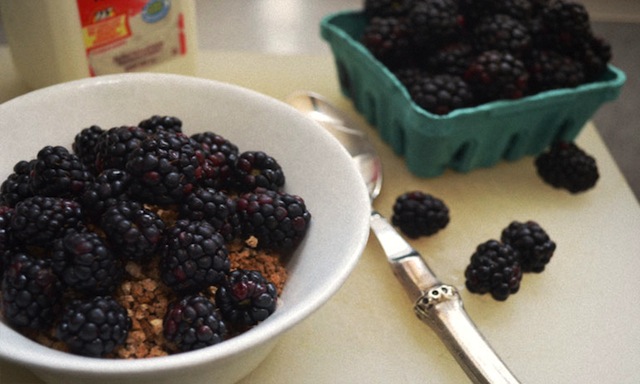 It’s August 1st — this is troubling, as it means that once again I’ve failed to slow summer’s inevitable progression. So given my apparent limitations with this whole time control thing, I’m focusing instead on those aspects of the season that I can dominate . . . like what I’m eating (doesn’t it always come back to food?). At the top of the list: blackberries, which for me somehow embody everything that’s most seductive about summer. Try popping just a few in your mouth and watch how quickly the bottom of the little cardboard container they came in reveals itself. With the blackberry, there’s no eating just a few.

One can do a little with blackberries, or a lot. On the little end of things, try throwing a handful on a bowl of Grape Nuts and watch how an otherwise bland breakfast cereal becomes something really special — the rare healthy breakfast you actually want to eat. Or for the more ambitious, try this blackberry buttermilk upside-down cake, which is moist, light, and a beauty to behold. Of course, even if you can’t extend summer, it’s still possible to enjoy an off-season blackberry — just wash, dry in a salad spinner (lined with several layers of paper towel), transfer to a resealable plastic bag, and place in the freezer. A few months from now you’ll be glad you made the effort.

Radishes are available year-round, but the bright pink variety pictured here (called Cherry Belle) can mostly be found in the warmer months. Even if you’re not a fan of the radish’s sharp, peppery flavor it’s hard not to be seduced by the festive, homey look of these babies — put a bowl of them on your table and everything else (especially a cocktail) seems to taste better, whether or not one ever passes your lips.

Of course, even those who don’t like the flavor are unlikely to complain if a little sliced radish shows up in their salad; it looks good and barely registers on the pepper scale. But the real test of a radish lover is whether he or she will pop one whole in his or her mouth, with just a quarter inch or so of the top still attached, and with no accompaniment to mellow out the bite. I reside somewhere in the middle — a fan, but ideally with the addition of some good butter or olive oil and a little sea salt. It’s a great way to get a meal started. But whichever camp you fall in, now’s the moment to capitalize on these summery little firecrackers.