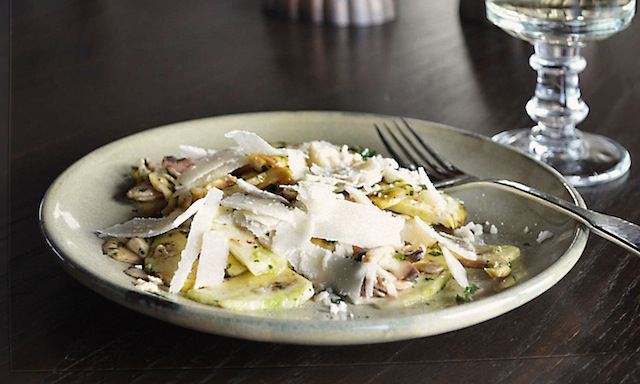 Happy New Year everyone! I’m writing this from the west Coast—Malibu to be precise—one of the few places in the country where it’s above freezing (well above, in fact; it’s 70˚ today and the skies are clear if a little hazy). I feel almost guilty sharing that information, knowing the miserable conditions so many of you are enduring back east. I can’t imagine what New York City feels like at 6˚, to say nothing of the bone shattering temperatures in places like Chicago and Minnesota (where it was -15˚ yesterday!), though that doesn’t lessen my empathy for what you’re all going through. I guess what I’m trying to say is I feel for you, even if I can’t imagine what you’re actually feeling. Still—and I hope you’ll forgive me for saying this—I’m mighty glad to be where I am. Though we didn’t plan this as a vacation (something I’ve been reminding myself all week as I drag myself over to the keyboard) our timing couldn’t have been better. And while we’re not exactly kicking up our feet, it’s definitely been a “get-away,” with all of the restorative connotations that phrase carries with it. 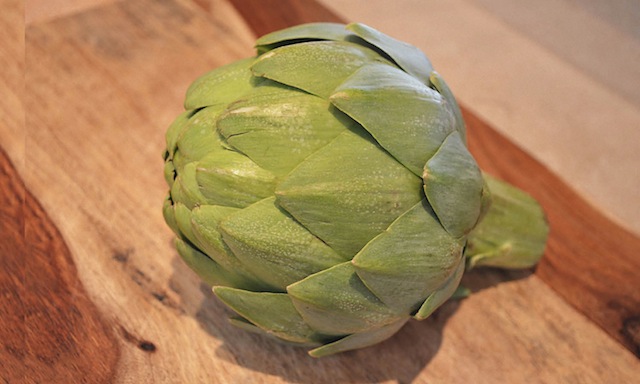 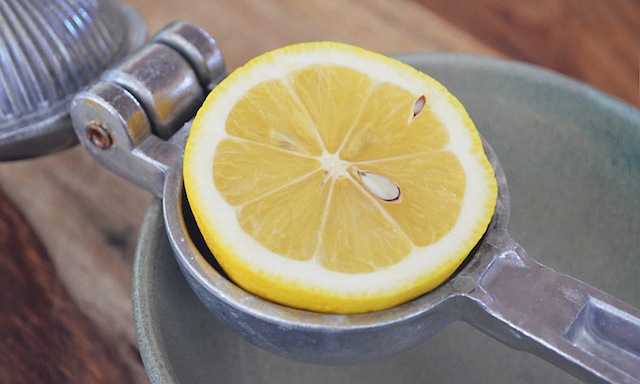 There’s a lot for Alfredo and me to be grateful for as we march into this new year, among them the gift of this Malibu beach house, which was offered to us for the month by two very generous friends. To say that this place is idyllic hardly does it justice—we’re just feet from the beach, so the sound of the thundering surf is our constant soundtrack. And each morning we awaken to the most incredible light show, the sky streaked with shades of pink, and orange, until it all fades away to a majestic cerulean blue, with maybe a cloud or two thrown in to break up the monotony. That and the electric orange sunsets function as exclamation points for the start and “finish” (or mid-point really; the sun sets at 5:30) of each day—a reminder that sometimes your only job is to stop and let your jaw drop in wonder and appreciation.

Of course, wonder and appreciation (and gratitude!) are things we’re experiencing a lot of at the moment, since the real reason we’re out here is for the birth of our daughter. As I may have mentioned previously, her due date is January 17th, so to protect against the possibility of an early arrival and our still being in New York (something we would have been very worried about had we been in town for last week’s snow storm), we decided to come out on the 29th—which had the added advantage of putting us here for New Year’s Eve (which we spent with two of our oldest, dearest friends). As it turns out the baby has not come early, and in fact shows no signs of doing so anytime soon, so we all agreed (“all” being the obstetrician, our wonderful surrogate, and Alfredo and me) that we would induce delivery next Tuesday, the 14th. Obviously there’s still a possibility that she could arrive without any medical assistance—something I think all of us would prefer—but in the interest of our surrogate being able to coordinate childcare for her two daughters, not to mention our making sure that various members of our family would be here for the big event, it just seemed to make sense to schedule a date everyone could plan around. 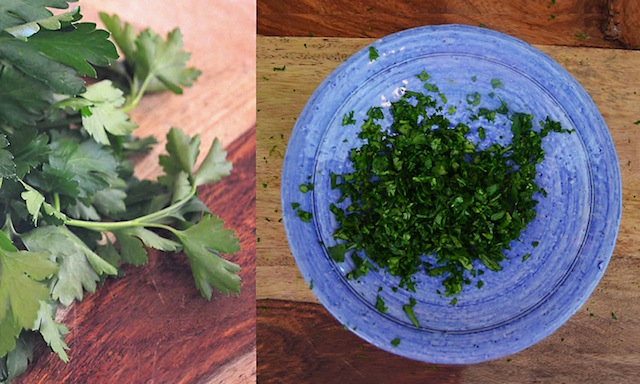 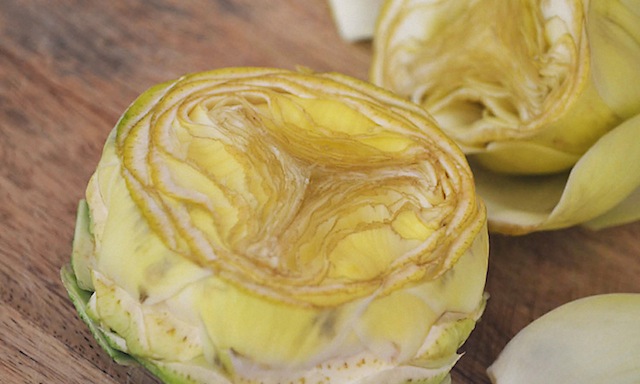 Do I sound calm, cool, and collected around all this? I think I am, sort of, which is as much a surprise to me as it is to all of our friends who assumed I would be a nervous wreck by this point. Perhaps that will come later—for now I’m just excited, a little overwhelmed, and super focused on being as prepared as possible. So that’s the big news here: we’re about to be dads (!), a concept that gives ordinary questions like: What should we do on Saturday night? a whole new meaning, since IT’S THE LAST SATURDAY OF OUR LIVES THAT WE WON’T BE PARENTS! Wow. Like I said: wonder and appreciation.

In the meantime, it’s pretty much business as usual—preparing for our lives to be turned upside down, but otherwise functioning much as we always have: working, trying to exercise (I took a brief run along Zuma Beach yesterday, my first such outing since my surgery, and another thing for which I am profoundly grateful), and, of course, eating. Admittedly, a lot of this has been at restaurants, though we’ve also made a few meals at home, taking advantage of this glorious location, our incredibly well outfitted kitchen (including a huge Wolf range), and the amazing produce available at what is otherwise your standard issue, football field-sized, suburban supermarket. I’m not exaggerating when I say that in the last two days I’ve eaten possibly the single best tomato, and undoubtedly the best, perfectly ripe avocado, of my entire life—both drizzled with merely average olive oil and some sea salt. The flavors were so sharp and crystal clear that I was practically doing somersaults around the kitchen. 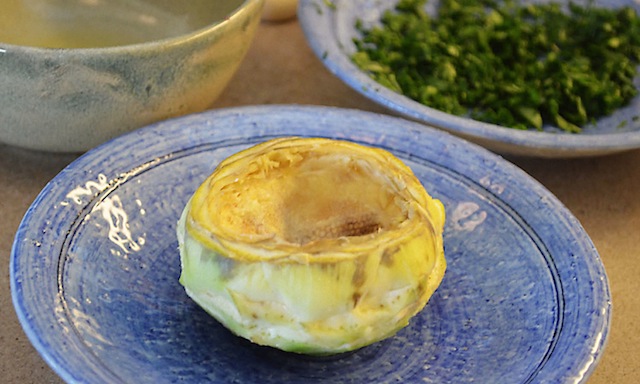 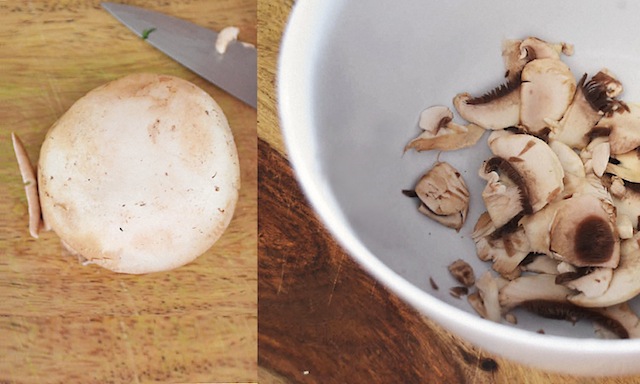 And then there are the artichokes—a small tower of which presided over the happy corner of the market known as the produce section, and a reminder of why life here is so enticing. They presented an opportunity I didn’t want to miss so I decided to make a version of the shaved artichoke salad I’d eaten (and loved) a few nights earlier. That salad was made with baby artichokes, one of the few items the market did not have, but somewhere in the recesses of my memory I recalled a recipe for a similar salad using the larger variety, something I ultimately found on Epicurious. The recipe originally ran in an edition of Gourmet from 2002 and has likely been languishing in my clippings file since then. I can’t imagine why: it couldn’t be easier (making me wonder why I have always been so intimidated by preparing this favorite vegetable), and it’s delicious—the naturally metallic flavor of the artichoke perfectly offset with the tang of lemon juice, the nutty flavor of olive oil, and the kick of salty cheese (the recipe calls for Parmigiano, which I swapped out for Pecorino because it’s what I had in the fridge, and because I liked its slightly more concentrated saltiness here).

I suppose one source of my artichoke anxiety has stemmed from how to deal all those rubbery leaves and the weird, fuzzy stuff at the center. This recipe makes such simple work of the process, however, that it’s given me a whole new confidence where this strange little vegetable is concerned. Literally, a scissor, a paring knife, and a melon baller (or strong teaspoon, which is what I used) is all you need to carve the artichoke down to the heart of the matter—the heart of the artichoke. Next, you shave the heart as thin as you can with a mandoline or other adjustable slicer (thinner than what you see pictured here, if possible; I found these slices a little too thick but could not get my slicer to cooperate), toss with a small amount of lemon juice, then mix with a similarly slivered mushroom, a small amount of chopped parsley, a few splashes of olive oil, and some salt and pepper. Top with a few curls of salty cheese and a little more of that olive oil and you have the sort of bright, simple combination of flavors that can render you speechless.

That said the one thing that perplexes me about this recipe is the serving size, since as written the yield is supposedly enough for two. Personally, I recommend doubling the recipe, because even with an appetite considerably smaller than mine, I can’t imagine that would be enough. Plus, this is the sort of lip-smacking combination you want to make sure you have plenty of. That’s achieved easily enough with this recipe—simply consider the ingredients listed as good for one and expand from there.

Anyway, this will likely be the last you hear from me for at least the next few weeks, though I’ll certainly keep you posted on things as they develop. In the meantime, stay warm, and well, everyone! 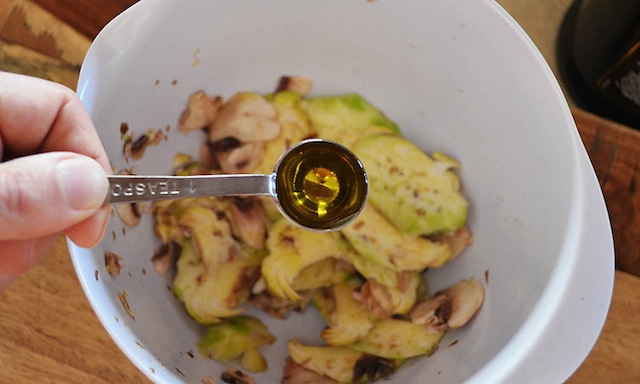 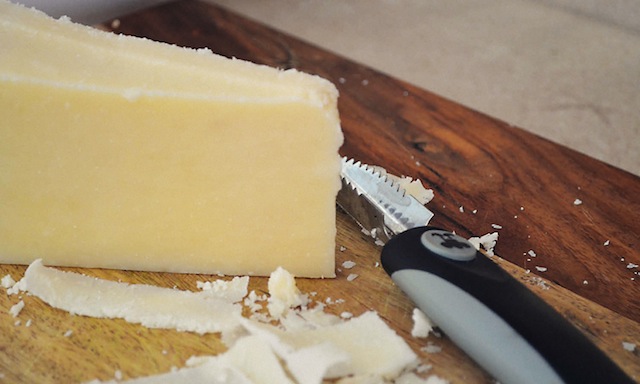 Special equipment:
—A melon ball-cutter (a teaspoon and some elbow grease will also do the trick)
—A mandoline or other adjustable slicer

Directions:
—Cut off artichoke stem and discard. Cut off top inch of artichoke with a serrated knife. Bend back outer leaves until they snap off close to base, then discard several more layers of leaves in same manner until you reach pale yellow leaves with pale green tips.
—Cut remaining leaves flush with top of artichoke bottom with a sharp knife, then pull out purple (TRG note: or green, not all artichokes will have purple leaves) and scoop out fuzzy choke with melon-baller (TRG note: a strong teaspoon will also work). Rub cut surfaces with a lemon half. Trim remaining dark green fibrous parts from base and sides of artichoke with a sharp paring knife, then rub cut surfaces with same lemon half.
—Trim mushroom stem flush with cap, then rub mushroom with same lemon half. Squeeze ½ teaspoon juice from remaining lemon half into a bowl.
—Shave artichoke and mushroom as thinly as possible with slicer and toss immediately with lemon juice, then with the oil, parsley, salt, and pepper.
—Shave several pieces of cheese on top of salads with a slicer or vegetable peeler, drizzle with olive oil, and serve immediately.

Note: Do all prep-work right before serving to avoid discoloration.

Serves two (according to the recipe; I recommend doubling for that number) 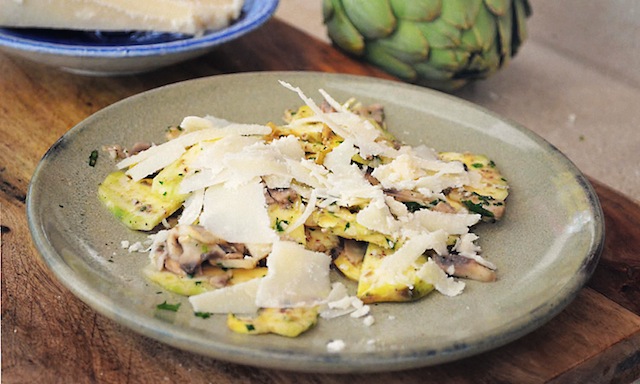