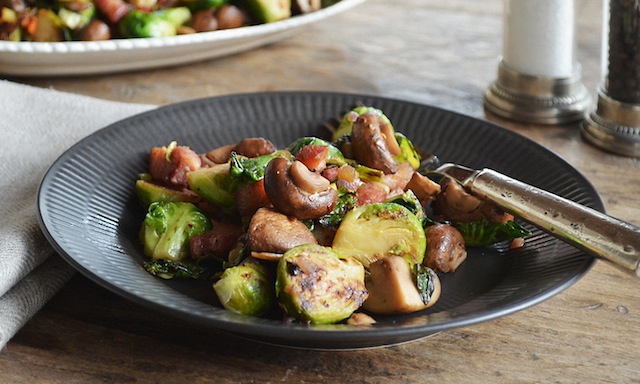 I feel like I should preface this posting with a warning that I’ve just come off the red-eye from L.A., and if the text has you scratching your head at times, that’s the reason why. The reality is, though, that my whole world is about to change, so I better get used to rolling with things for a while—functioning on less sleep, doing multiple tasks at once. That sounds a little vague and cryptic, so I guess this is as good a time as any to come out and say it: Alfredo and I are going to be parents… to a little girl, due via our wonderful, California-based surrogate in mid-January. Obviously this forthcoming arrival has already had a huge impact on our lives, and the changes have only just begun. So I’m trying to prime myself for the fact that I’m going to need to be more flexible about pretty much everything in my life going forward. Anyway, with just two months to go I thought it was time to share this happy news with you, and while I have no intention of going AWOL, you’re likely to see some changes around here as a result, or maybe not. We’ll just have to see how things go. 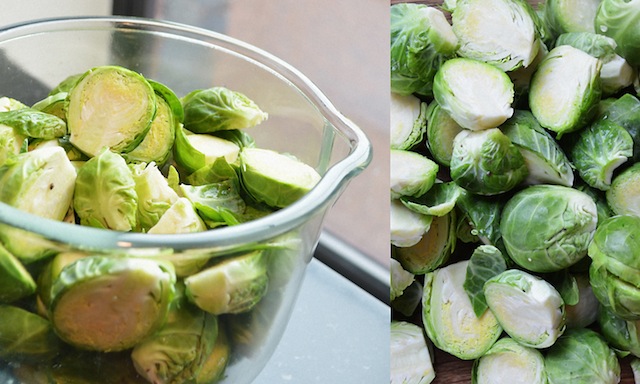 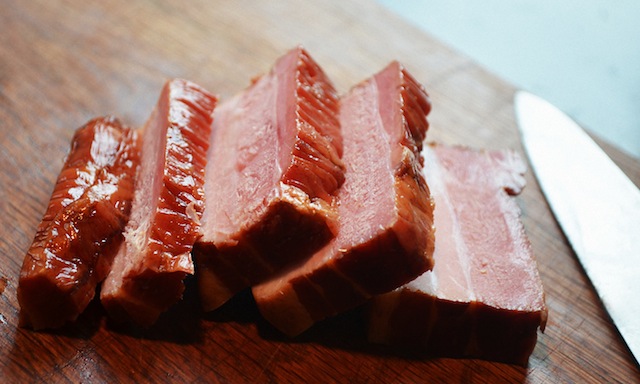 For now, however, I bring you a great fall vegetable recipe, culled from the current issue of Bon Appétit. It’s little wonder that it grabbed my attention, as it stars one of my favorite vegetables: Brussels sprouts. Here they’re given “a little” something extra thanks to the addition of mushrooms, shallots, thick cut bacon, a splash of Sherry, a sprinkling of red pepper flakes, and a few tablespoons of lemon juice. Think about that for a second—the bright metallic flavor of the sprouts, paired with the earthiness of the mushrooms, the saltiness of the bacon, the mild heat of the red pepper flakes, and the tang of the Sherry and lemon juice. If that doesn’t sound like the perfect flavor combination for fall I don’t know what does (but then, I do have a weakness for the salty/tangy side of things). 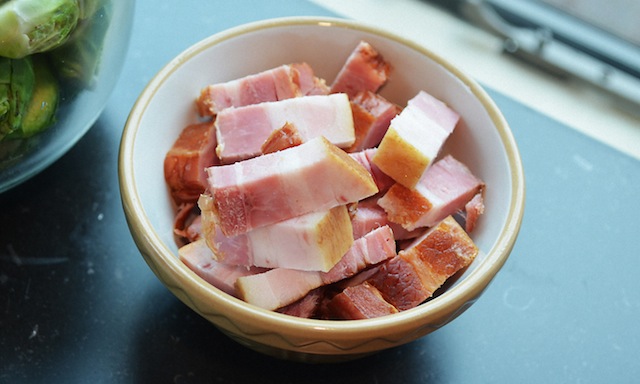 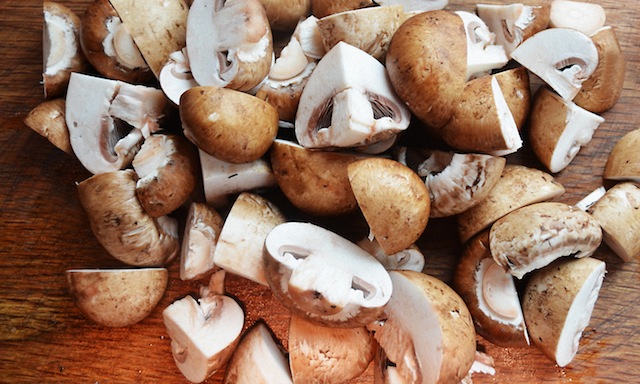 Although the recipe calls for cooking the sprouts on a gas grill over medium-high heat for about 8 minutes or so, as an indoor cooking alternative you can sauté the vegetable in a grill pan or skillet. That’s the approach I took—cooking them over a medium high flame for ten minutes or so (a few more than directed), after first tossing the sprouts with olive oil, salt, and pepper. That timing issue is good to note here because although the sprouts will be reintroduced to a hot pan later in the cooking process, they should be fully cooked through by that point. In other words, no matter what the directions say don’t remove the sprouts from the heat until they’re fork tender, and the exterior reveals a nicely burnished char. 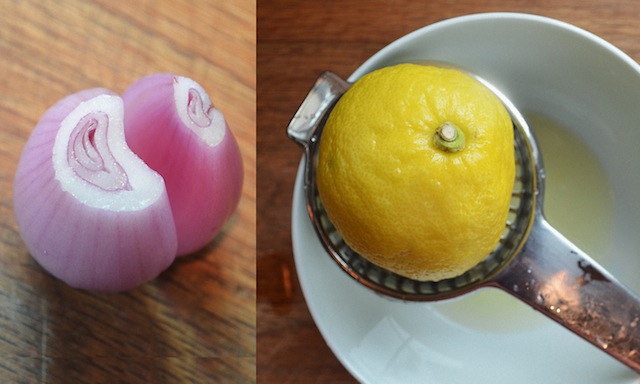 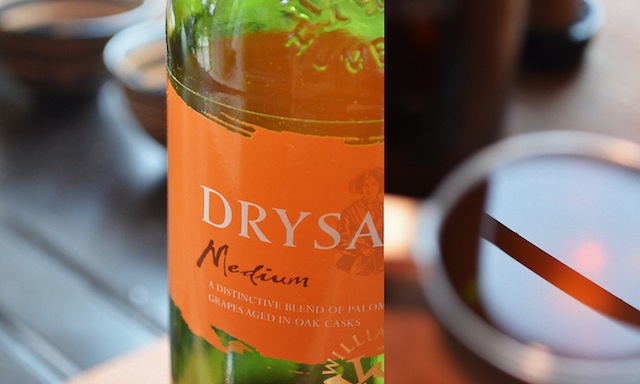 Next, cook the bacon in a separate pan until crisp—the meat having already been sliced into ¼” strips using either the thick-cut variety suggested by the recipe, or the slab bacon I used here (which is only marginally more time consuming). Once crisped, transfer the bacon to a paper-towel lined plate and add the mushrooms to the drippings, which serve as a lubricant for during the cooking process while also infusing the mushrooms with a hint of smoky flavor. (Note: if using crimini I suggest slicing the mushrooms instead of quartering them as directed; the size and texture just seems better to me.) After about three minutes, add the chopped shallot and sliced garlic to the pan, and enjoy the wonderful fragrance filling your kitchen. Once the shallot and garlic have softened sufficiently (about five minutes), remove the pan from the heat and add the sherry and the red pepper flakes. Stir this intoxicating mixture off heat for a minute or so until all of the liquid has evaporated, then add the Brussels sprouts and the bacon, and toss with the lemon juice. Serve immediately—though that’s a directive you’ll hardly need, as the bright autumn colors and wonderful salty/tangy scent will have you racing to fill your plate. 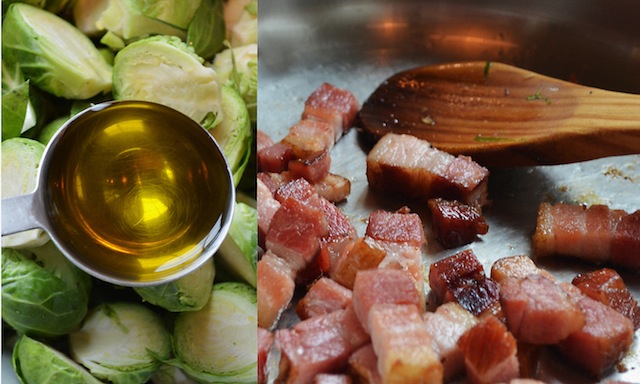 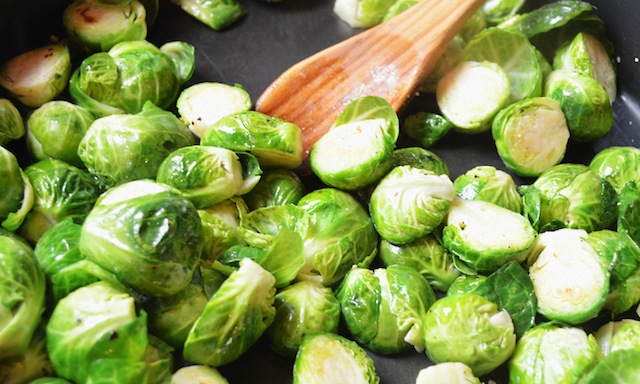 One final note about the mushrooms: although the recipe states that either chanterelles or crimini mushrooms will do, chanterelles are clearly preferable here, as they lend the dish a delicacy it doesn’t have with the decidedly more ordinary crimini. I’ve now made the dish both ways, and while each version was good, the one made with the chanterelles offered something extra. This was largely due to the chanterelles’ more delicate flavor, but also because their compact shape and firm texture offers a better counterpoint to the crunch of the sprouts and the chew of the bacon than the spongier crimini. Either way, though, this is just the sort of medley of flavors, colors, and textures you want this time of year. In fact, if I were making Thanksgiving dinner this year, this might need to be one of the featured acts.

Directions:
—Prepare grill for medium-high heat. Toss Brussels sprouts and oil in a medium bowl; season with salt and pepper. Transfer Brussels sprouts to a grill basket and grill, tossing occasionally, until tender and lightly charred, 5 to 8 minutes. (Alternatively, cook Brussels sprouts in a large grill pan or skillet over medium-high heat, 5 to 8 minutes).
—Cook bacon in a large skillet over medium-low heat, stirring occasionally, until crisp, 5 to 8 minutes. Transfer to a paper-towel-lined plate.
—Add mushrooms to drippings in skillet, toss to coat, and cook without stirring, 3 minutes. Add shallot and garlic; cook, tossing often, until shallot is softened, about 5 minutes. Remove from heat and add Sherry and red pepper flakes. Cook until liquid is evaporated, about 1 minute.
—Add Brussels sprouts and bacon and toss to combine. Add lemon juice; season with salt and pepper. 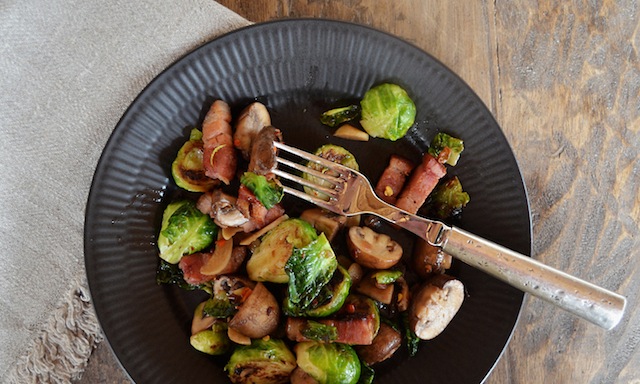