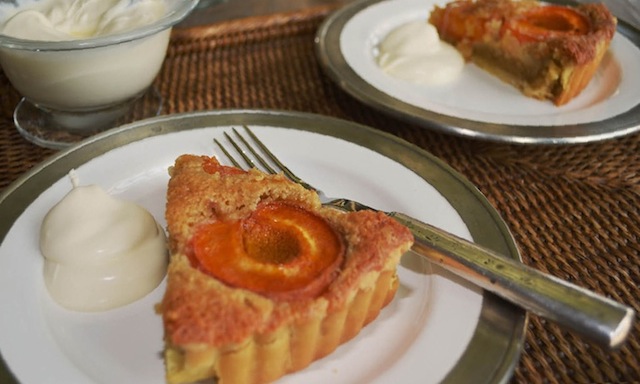 Is it possible I’ve never tasted an apricot before? That was the question running through my head recently as I picked among a small mountain of this most summery of fruits. I could certainly recall eating the dried version (both plain and chocolate-covered — especially chocolate-covered), and, of course, the kind that had been cooked down to jam form. But when it came to locating an experience where I’d actually bitten into one in its unfussed-over state, I had nothing. Ditto any memory in which I’d used said fruit for cooking. Which was weird. I mean this is an apricot we’re talking about, not a mangosteen or something even remotely exotic. It was time to address the situation.

To be clear, this sudden impulse was driven by a recipe — the very one I’m bringing to you here. It ran in Alice Hart’s “Alfresco” column in a recent edition of the New York Times, and is one of those (I’ve mentioned this thing before) that somehow grabs a-hold of me and won’t let go. For days all I could think about was making this apricot tart. I‘m not even that much of a dessert person. And it was really hot and humid outside (if you were anywhere near the east coast of the U.S. last week you know what I mean) — hardly the ideal weather for baking or for doing much of anything in the kitchen beyond filling the ice tray. It didn’t matter: I was beaten. I’d been pinned by a tart. 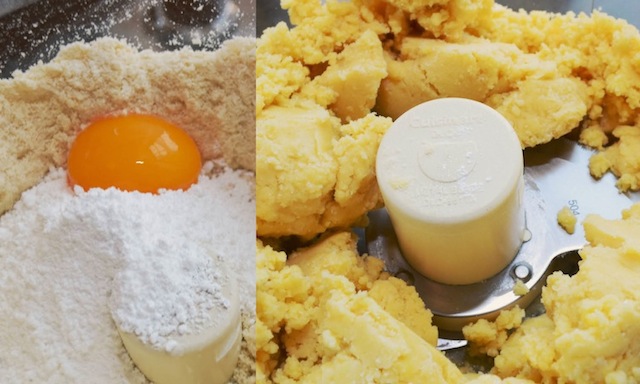 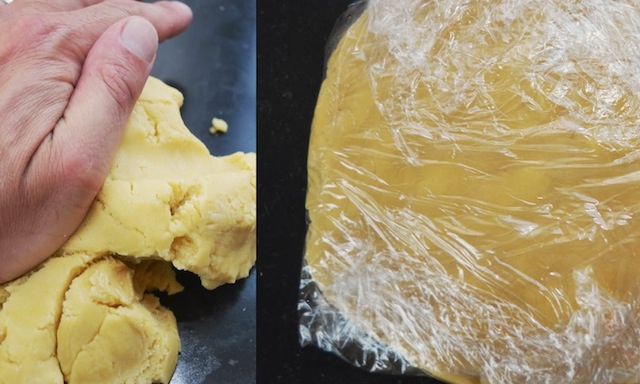 So I went shopping for apricots and the thing that I discovered was that I couldn’t just limit myself to the six suggested by the recipe (eight if they’re small), but instead had to buy a great big bag-full. Without ever having tasted one I’d suddenly become infatuated with the apricot — its tidy little shape, its fuzzy skin, its’ day-glow orange jacket. Even if one never passed my lips, I’d be glad to have a bowl of them around to admire.

Of course, one did pass my lips (several did, in fact) and what I found was that while I appreciated the way the fruit neatly straddled the tart/sweet divide, all things being equal I’d just as soon eat a really good nectarine. In fact, nectarines can be substituted here, as can berries, or slices of ripe peaches, or pear. But no, apricots it would be — for one thing the flavor of the fruit would be sweetened, and deepened, by the brown sugar frangipane that lined the pastry shell, and anyway, apricots were what I had in the house. Plus there was the whole esthetic thing — I liked the way the neon of the fruit would look against the tart’s honey-colored filling. That counts for something. 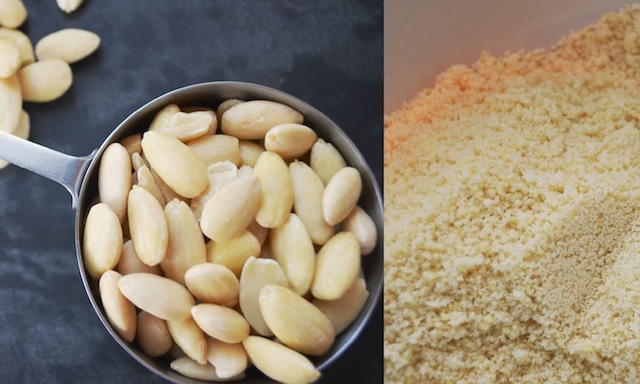 A few words about frangipane, which I had never made before but which I had most definitely eaten: it’s easy to assemble. Maybe because most of the frangipane I’ve sampled over the years has been layered into some sort of elaborate French pastry, I’d imagined that making it would require many steps and a complex set of skills. At least as presented in this recipe, however, the process couldn’t be easier. It’s all done in a food processor (the grinding of the almonds, then the mixing of it with the vanilla pulp, the flour, the eggs), and while it’s good at this batter-like stage, once cooked it becomes something else entirely — a kind of squishy toffee-flavored pie filling that’s the ideal counterpoint to the texture and flavor of the fruit. What’s more, the considerable overflow that occurs during baking (the recipe suggests cooking the tart atop a cookie sheet, advice you’ll definitely want to heed) makes for its own reward: a kind of free-form brown sugar and almond cookie I couldn’t stop eating.

The pastry shell did create a few anxious moments for me during assembly, as it kept cracking and breaking when I tried to lay it in the pan (I had the most success with this when I gently wrapped the dough around my rolling pin). And in the end I was able to hide the many imperfections by calling on the old press-and-patch technique, none of which was visible when the tart exited the oven. What’s more, the relatively long cooking time (about seventy-five minutes) at a low temperature (325) eliminates the need for pre-baking the shell. Seasoned bakers may fear that means a soggy crust. They needn’t — mine was perfect. 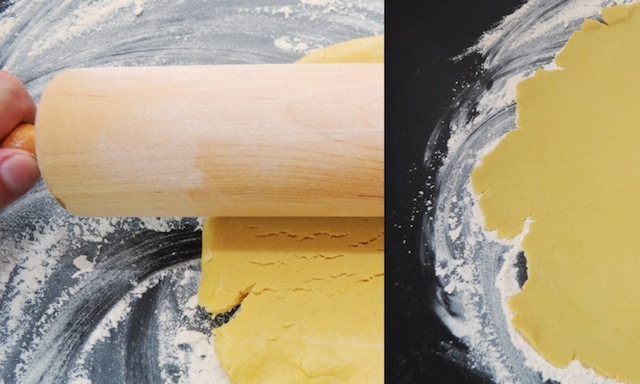 Did I mention that the tart was delicious — the way the fruit, the frangipane, the buttery crust that was cooked to perfection all worked together? Anyway, it bears repeating. It was summery and satisfying in just the way you want dessert to be this time of year. And the preparation calls for as much use of the fridge (the pastry has two seperate chilling stages) as it does the oven, which means that even on a really hot day it won’t make you break a sweat. 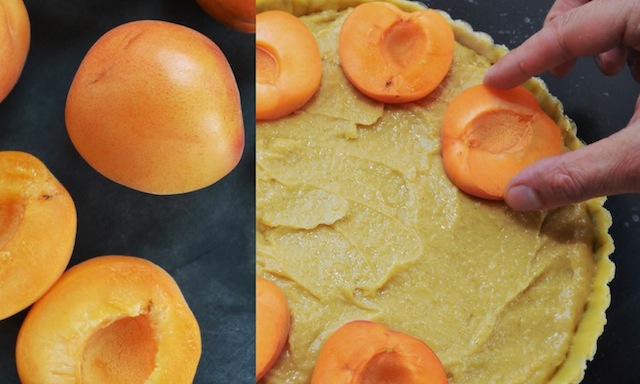 Directions for the pastry:
—In the bowl of a food processor, combine the butter, flour, and salt. Pulse until the mixture resembles very fine bread crumbs. Add the confectioners’ sugar, egg yolk, and 2 tbs chilled water, and pulse to bring the mixture together (see note from TRG, below).
—Pour onto a work surface and knead the dough sparingly until smooth, being careful not to overwork it.
—Flatten into a disk, wrap in plastic, and chill for at least 30 minutes or up to 24 hours.

Note: If the dough still seems crumbly after pulsing, add another more chilled water by tablespoon increments until it holds.

Directions for the frangipane and assembly:
—In a food processor, grind the almonds to a fine powder. Transfer to a bowl. In the food processor, combine 1 cup brown sugar, butter, and vanilla pulp. Process until light and fluffy, then with motor running add the flour and the eggs. Add the ground almonds and pulse to mix evenly. Set aside at room temperature or refrigerate for up to 24 hours. Bring to room temperature and stir before using.
—Lightly flour a cool work surface and roll the pastry into a large disk about 1/4-inch thick. Press into a 9-inch tart pan with a removable base and trim the edge. Chill at least 1 hour.
—Heat oven to 325˚ with a large baking sheet on the middle rack.
—Spread frangipane in the chilled tart pan, and nestle the apricot halves evenly on top, cut sides up. Sprinkle each half with about 1/2 tsp brown sugar. Place the tart on the baking sheet and bake until golden, and set, about 1 hour and 15 minutes. If the top appears to be browning too fast, cover loosely with foil.
—Trim any baked overflow to loosen the edge of the tart. Press up on the bottom of the pan to loosen the sides and cool the tart in the pan on a wire rack. When completely cool, serve with crème fraîche or whipped cream. 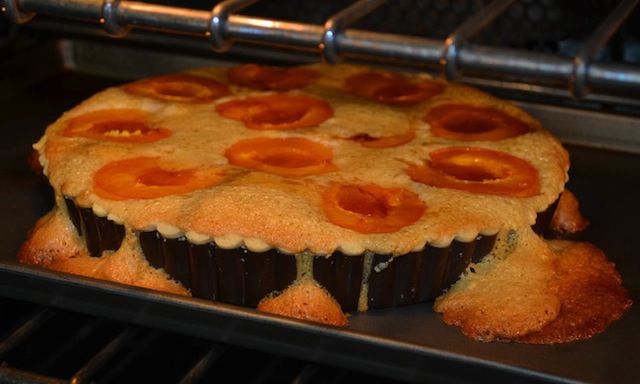 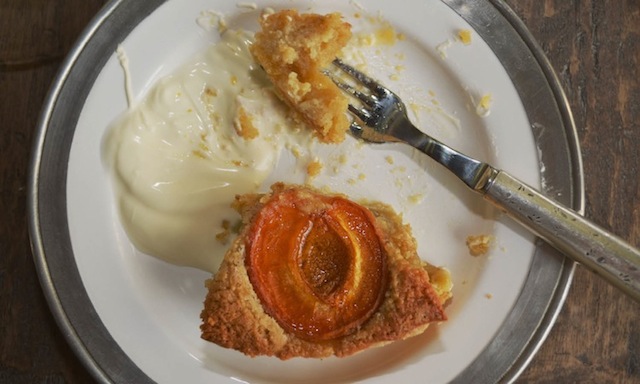