Brownies, like my old stuffed bunny, are one of those things from childhood that I’d pretty much said goodbye to. And no, it’s not because of the calories, or the carbs, or even the way chocolate still manages to show up on my face a few days after eating it. Rather, it’s because the only brownies I’ve ever really liked are the ones made from a box mix, and frankly, if that’s the best there is then I’d just as soon rack up the calories in some other way.

Still, it doesn’t quite compute that a factory-made product could consistently best something made from the sorts of fresh, recognizable ingredients readily available at any quality grocery store. The problem is that while many of the “from scratch” varieties I’ve sampled over the years have had a great chocolate flavor (and even, on a few occasions, that seductive, crackled glaze made famous by Duncan Hines) the one thing they all were missing was for me the most important — a moist, chewy center. 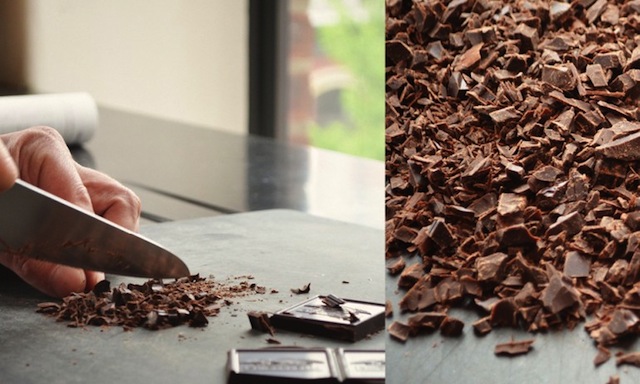 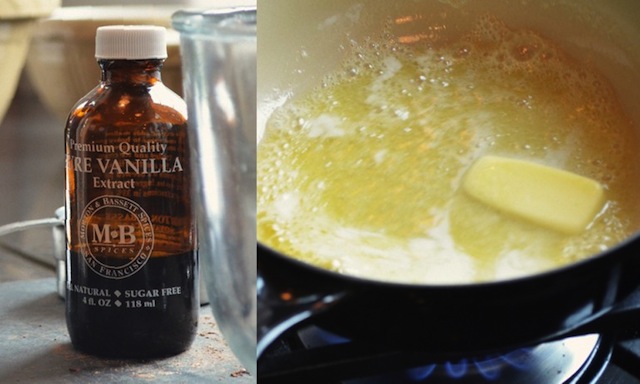 Apparently it’s an issue the folks at America’s Test Kitchen have been grappling with as well, so when I saw their recipe for chewy brownies in their “Best of” recipe collection for 2011 (a video from the recent episode devoted to the subject can also be viewed on their website) I was immediately intrigued. Normally I would ignore such a claim, since past experience with similar promises have failed to deliver, but as the folks at America’s Test Kitchen are all about working and reworking a recipe until they’re satisfied it delivers in exactly the way they want, I felt confident that this was one brownie recipe worth trying.

According to ATK, the secret to achieving that elusive chewiness is a relatively simple one: swapping out much of the butter for vegetable oil (without getting all science class on you, this has to do with saturated versus unsaturated fats — the latter of which remains liquid at room temperature and is the key to that gooey center). In other words, with the right mix of solids to liquids, it is possible to attain that sought-after chewiness without resorting to industrial engineering! 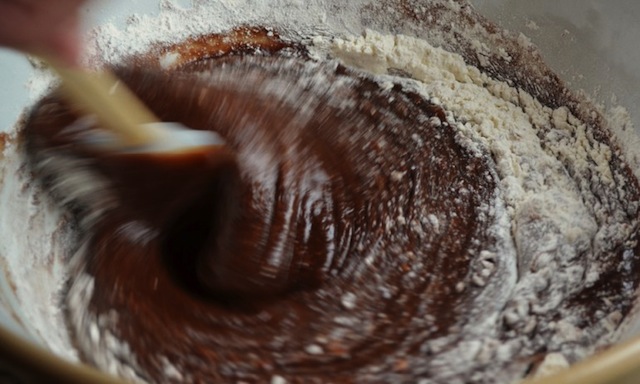 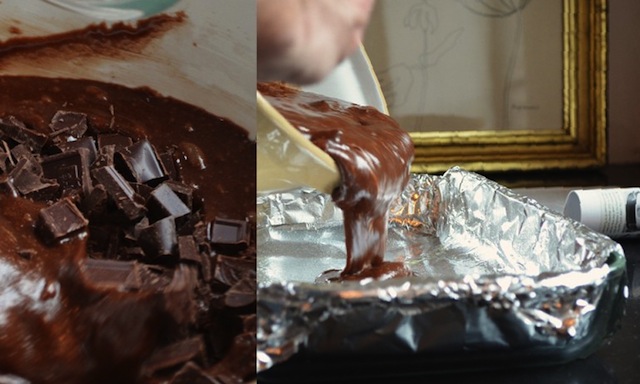 As for the all-important flavor, the recipe calls for a specific mix of three different varieties of chocolate — Dutch-processed cocoa (a powder), unsweetened chocolate, and bittersweet chocolate. And while ATK helpfully recommends specific brands to look for, they assume a familiarity with these ingredients that I don’t (or didn’t) possess, and that left me scratching my head in the baking section of the grocery store, as none of the powdered cocoas on the shelf were identified as “Dutch processed,” nor any of the chocolate bars as “bittersweet.” So for all you occasional bakers out there, here’s what I discovered: the words “bittersweet” and “semi sweet” can be used interchangeably (for both, the percentage of chocolate can be anywhere between 35% and 70%, with no milk — either liquid or dry — present in the mix). As for “Dutch-processed cocoa,” this simply means alkalized unsweetened cocoa so look for either description. The other thing to know is that there are only two types of unsweetened cocoa: “Dutch processed” and “natural,” which means that if you see a variety listed as “natural,” you need to keep searching.

So with all this leg-work, was that from-scratch, chewy-centered brownie finally within my reach? Well, almost. On my first attempt I baked the brownies on my oven’s convection setting, which had the effect of eliminating any of that promised gooey quality, delivering instead a brownie that had the consistency of drywall. Still, the flavor had promise, with all the deep chocolaty richness you expect from a brownie, but with a more complex, grownup taste than the just-add-eggs-and-oil variety I’d grown up with.\ 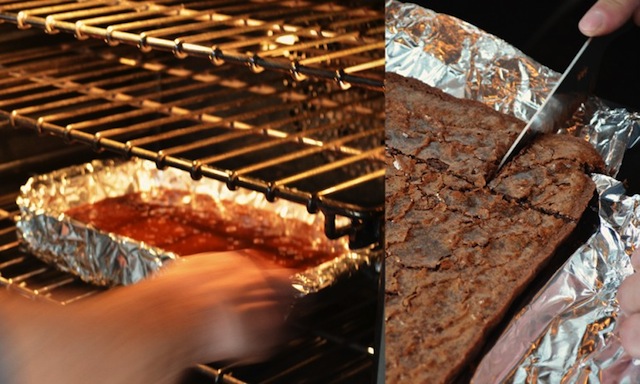 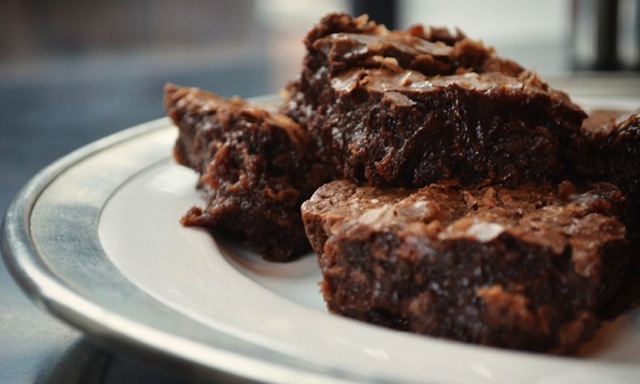 My second attempt was much more successful, however, and after cooking for the suggested 35 minutes — this time on my oven’s basic “bake” setting — I at last had the brownie I’d been hoping for: rich chocolaty flavor with the kind of decadent, gooey center (enhanced by chunks of melted chocolate embedded in the cake) that sticks to your teeth and can make your eyes roll to the back of your head. A dusting of powdered sugar was all it took to transport me back to the nirvana of elementary school bake sales!

A final cooking note: as advertised this is one moist brownie — so much so that it can prove challenging to separate from the foil-lined baking dish, or from your fingers. If you prefer it a little drier, try leaving the brownies in the fridge for a half hour or so before serving.

Directions:
—Adjust oven rack to lowest position and heat oven to 350˚. Make a foil sling by using the following steps: Cut 18-inch length of foil and fold lengthwise to 8-inch width. Fit foil into length of 13 by 9-inch baking pan, pushing it into corners and up sides of pan; allow excess to overhang pan edges. Cut 14-inch length foil and fit into width of pan in the same manner, perpendicular to the first sheet (if using extra-wide foil, fold second sheet lengthwise to 12-inch width). Spray with nonstick cooking spray.
—Whisk cocoa, espresso powder (if using), and boiling water together in large bowl until smooth. Add unsweetened chocolate and whisk until chocolate is melted. Whisk in melted butter and oil. (Mixture may look curdled.) Add eggs, yolks, and vanilla and continue to whisk until smooth and homogeneous. Whisk in sugar until fully incorporated. Add flour and salt and mix with rubber spatula until combined. Fold in bittersweet chocolate pieces.
—Scrape batter into prepared pan and bake until toothpick inserted halfway between edge and center comes out with just a few moist crumbs attached, 30 to 35 minutes. Transfer to wire rack and cool 1 1/2 hours. (Note: if your baking dish is glass, cool the brownies 10 minutes, then remove them promptly from the pan as the heat retention of the glass can lead to over baking.)
—Using foil overhang, lift brownies from pan. Return brownies to wire rack and let cool completely, about 1 hour. Cut into 2-inch squares and serve. 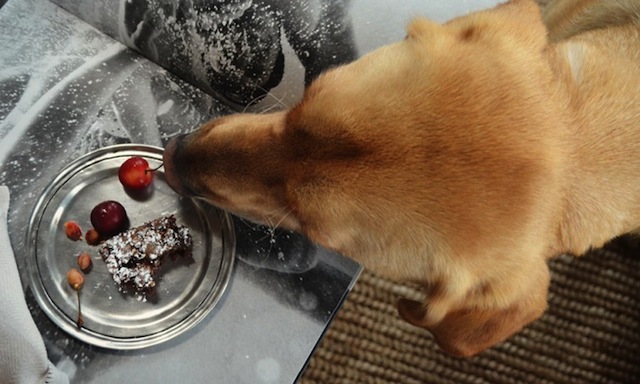