From Canal House Cooking, Volume No. 1 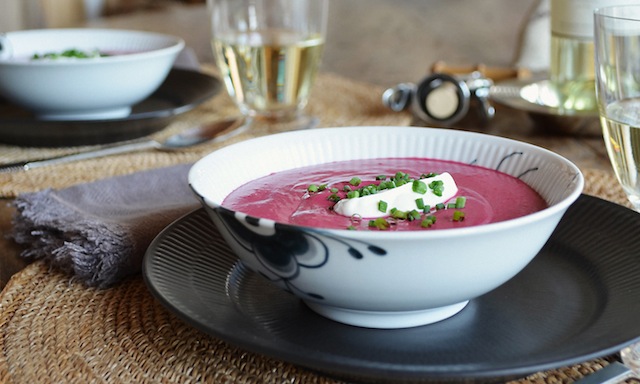 When it comes to hot weather dining strategies, some people advise that the best approach is to turn up the heat—be it in the form of spiciness or of temperature. And as counterintuitive as that may sound, these heat-seeking advocates may well have a point. (For my self, there seems to be a direct correlation between a spike in temperature and a desire for foods that will make smoke come out of my ears.) Still, when faced with the kind of heat and humidity many of us around the country have been dealing with lately, the cooling effect of a dish that’s meant to be served chilled can’t be underestimated; it’s like a blast of AC for your central nervous system, and who wouldn’t want a little of that when things start to get steamy? Of course, no matter how much more comfortable the item in question might make you feel, you’re unlikely to give it a second taste if it doesn’t rate on the flavor meter, which can prove something of a challenge for dishes that are served cold. Happily, it’s an issue you’re unlikely to encounter with this week’s posting—for that cold beet soup, otherwise known as borscht. 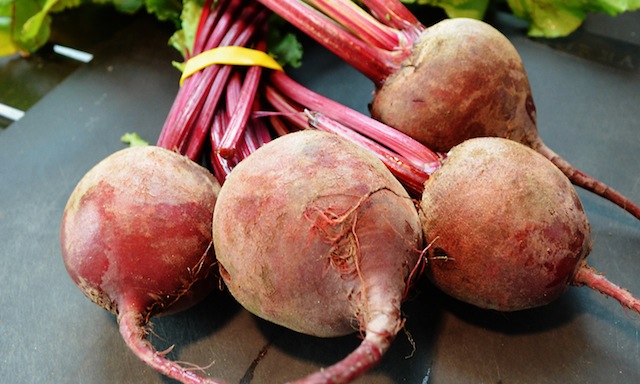 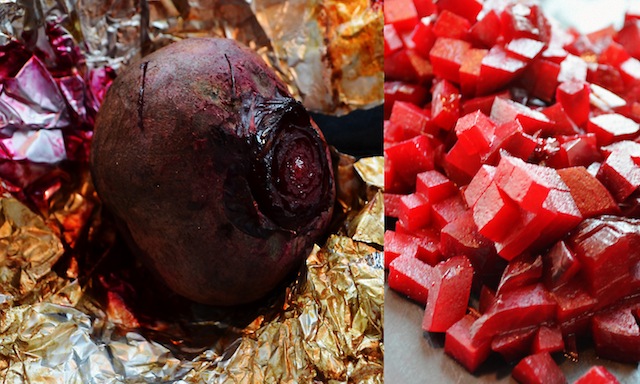 Now as much as I love borscht I recognize it’s a dish that carries with it a certain amount of baggage—baggage that for many people can get in the way of its enjoyment. For one thing there’s the stigmatizing “Borscht Belt” association, which unfairly conjures up a negative image (and stereotype) of those vacation spots in the Catskill Mountains where so many Eastern European immigrants spent their summer holidays in the first half of the last century. And then there are the various hurdles presented by the soup’s strange name, its purple color (or fuschia, in the case of this recipe), and the sweet/earthy flavor of the beets it’s made from—a characteristic many people simply can’t seem to get past. From my way of seeing things, however, all of these qualities are good ones: I love the Central and Eastern European heritage of this dish, just as I do its outlandish color, and its unique, vaguely exotic coupling of flavors. In fact, these last two qualities are ones that are particularly well served by the recipe I bring to you here. 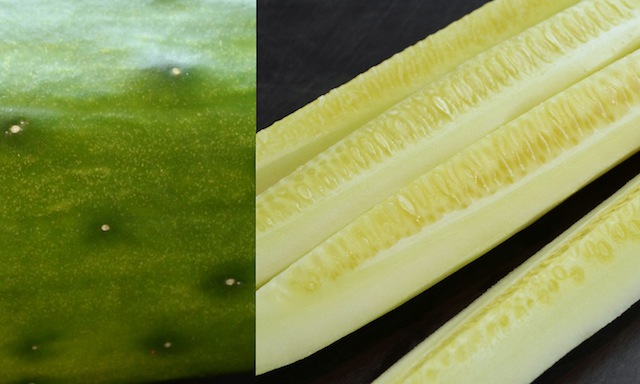 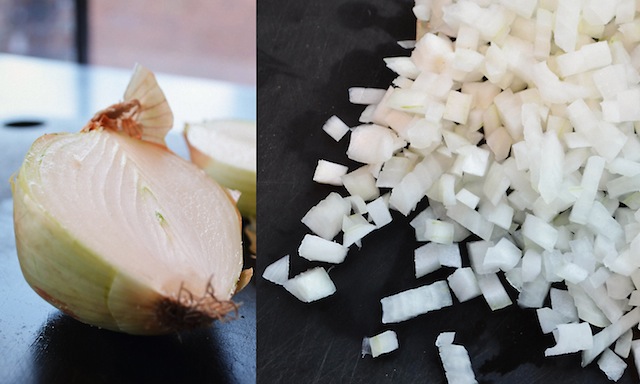 It’s a version of the dish I stumbled upon in Canal House Cooking, Volume No. 1 (their “summer” collection), and as explained in the recipe’s brief preamble, the soup been a summer standard at Melissa Hamilton’s restaurant in Lambertville, NJ since it opened in 1988. (Hamilton is one-half of the Canal House duo, the other being Christopher Hirsheimer—who I feel compelled to point out is also a woman, despite whatever assumptions you might have arrived at based on her name.) And I should probably also mention that while I’ve been eating borscht (both the cold and hot varieties) since I was a kid, I’d never felt moved to make it myself. That is, not until I came across this Canal House recipe. There was just something about the image accompanying the recipe—so bright and delicate and refreshing-looking—that compelled me to slow down and read the actual cooking instructions. And what I discovered is that making borscht (or at least, this version of it) is incredibly easy. 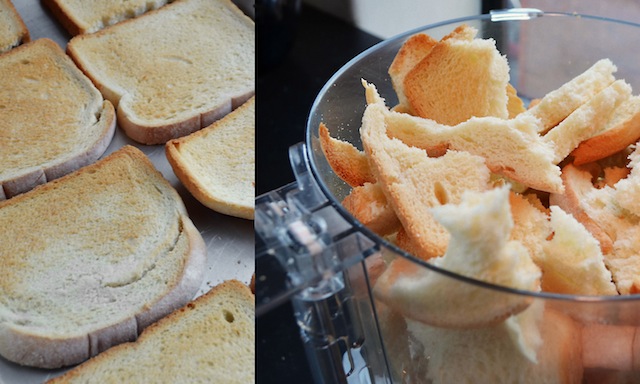 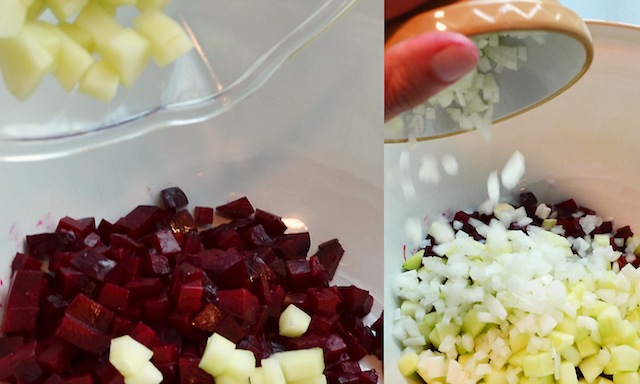 And even better, in addition to my beloved beets it features a number of other ingredients that I like a lot, such as cucumbers, sour cream (lots of this—always a good thing), Dijon mustard, and balsamic vinegar. Now I’m generally not a huge balsamic vinegar guy, as it’s one of those ingredients that seems to have slipped into over use in the last decade or so (sort of like sun-dried tomatoes). Its inclusion here intrigued me, though, in part because it’s not an ingredient featured in any of the other borscht recipes I’ve come across, and because its sweet/tangy notes struck me as just the thing to round out the earthy flavor of the beets. Suffice to say that the recipe immediately became one of those that lodges in the back of my brain, producing a constant refrain “Is it time yet? Is it time?” Well, between the sultry weather and the fact that I plain couldn’t wait to give this soup a try, within days it’s moment had arrived. 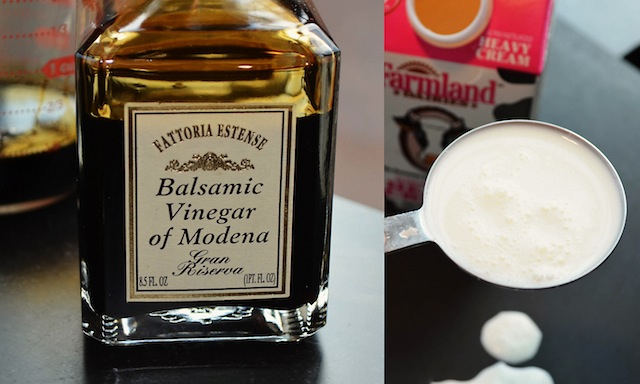 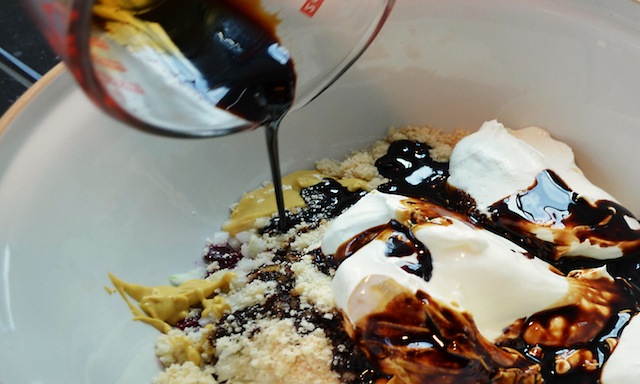 And so I set to work, whipping up a batch of fresh breadcrumbs in the food processer (the crumbs function as a binding agent for the various other ingredients in the soup, and as such are worth making from scratch), then wrapping each beet in aluminum foil and placing it into a 400° oven for about an hour, or until you can poke one with a knife and meet no resistance. And by the way, the scent of roasting beets is something wonderful indeed—if you happen to know someone who refuses to give beets a try, see if that scent doesn’t turn things around for them. In any case, once the beets have had a chance to cool a bit, peel off the skins (once roasted the skins are a little like the residue that collects on top of boiled and cooled milk—in other words, it’s very easy to remove), then dice them and add to a large bowl with the various other ingredients. These include a cucumber that’s been peeled, seeded, and diced; half of a small white onion that’s been chopped; a cup of those fresh breadcrumbs; 3 cups of sour cream; a little mustard; the aforementioned vinegar; and small amounts of both sugar and heavy cream.

Once these ingredients are well combined (several good stirs will do it), it’s time to puree the beet mixture. Rather than doing this all at once you’ll want to work in batches, spooning a third of the mixture into the blender, and once smooth adding another third, and so on. The whole thing should take no more than five minutes—a period in which all of those diced vegetables and other ingredients come together to form a thick, creamy substance that’s somewhat lighter in color than the borscht standard thanks to the presence of all of that sour cream. And by the way, if the consistency seems too thick, the recipe suggests adding up to a ¼ cup of water— though it’s an addition I did not feel was necessary. 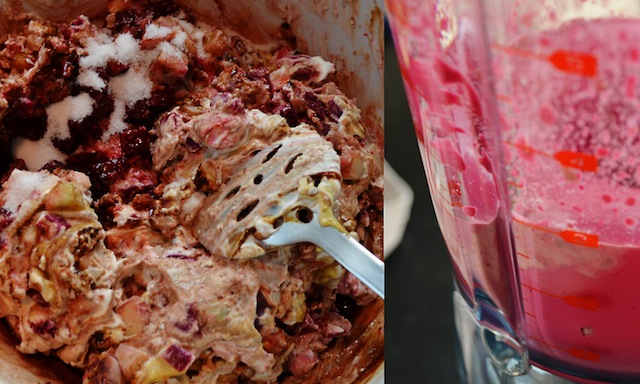 The recipe also advises allowing the finished soup some time in the refrigerator for the flavors to deepen—overnight at a minimum, or three days at the most. I’m sure this counsel is sound and that the soup would only improve with time, but we simply couldn’t wait that long; it looked too good, and we were hungry. And so after just an hour I ladled the soup into bowls, added a small dollop of sour cream, scattered some chopped chives across its placid surface, and dove in. Even in its “un-deepened” state the soup was wonderful—vivid, bracing, and above all, refreshing. I love the way the various individual flavors present in the soup (the cucumber, the vinegar, and, of course, the beets) shine through, while at the same time seamlessly coming together to form something all its own. I’d like to promise that the next time I’ll give the soup overnight to come together, but who am I kidding? Let’s just say I’ll try, and leave it at that. Either way, you’re sure to end up with something deeply satisfying—warm weather eating at its most luxurious.

TRG’s directions for making fresh breadcrumbs:
—Rip slices of slightly stale bread, English muffins, or pita bread into small pieces and fill a food processor or coffee or spice grinder about halfway full. Pulse until you get the sized crumb you’re after. (Note: if you don’t have any stale bread on-hand, place the bread slices on a cookie sheet in a 300° or 350° oven until slightly crusty, about five minutes—fresh slices can turn gummy in the machine.)
—Make more than you need and store the leftovers in a Zip-lock bag in the freezer; thaw thoroughly before using.

Directions for making borscht:
—Preheat the oven to 400°. Wrap each beet in aluminum foil and roast in the oven until tender, about 1 hour. (To make sure the beets are done, unwrap one and pierce it with a paring knife to check if it is tender.)
—When the beets are cool enough to handle, peel (the skins will slide right off) and dice them. Put the beets in a big bowl. Add the cucumber, onion, bread crumbs, sour cream (reserve a few tablespoons of this for serving), mustard, heavy cream, balsamic vinegar, and sugar. Mix well.
—Working in batches, purée the beet mixture in a blender until smooth. Use up to ¼ cup water to thin the soup if needed. Season with salt. Transfer to a covered container and allow the flavors to develop in the refrigerator overnight or for up to 3 days. (The soup improves with time.)
—Serve the soup in chilled soup bowls or pretty glasses. Garnish with a spoonful of sour cream or a drizzle of heavy cream, and minced fresh dill or chives. 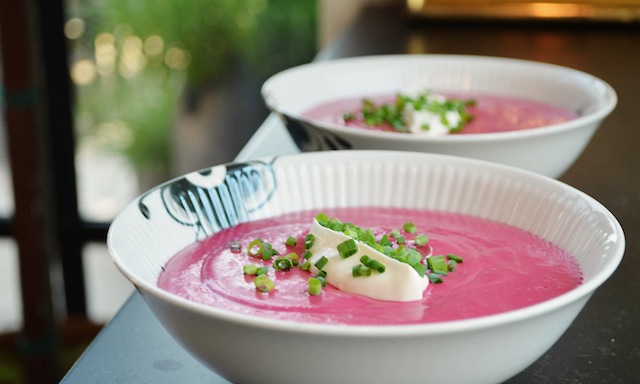 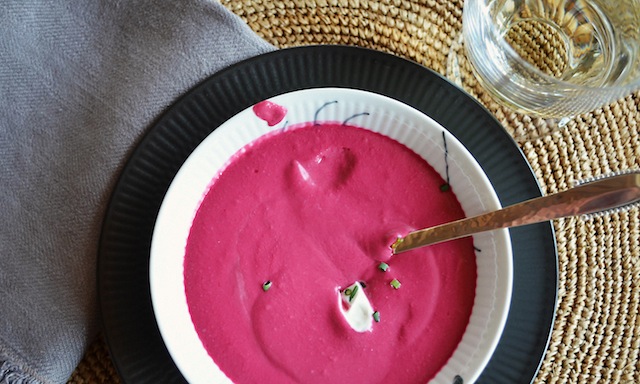