Once in a while you clip a recipe, put it into play, and are so delighted with the results that you swear it will become one of your standards. And once in a while that actually ends up happening. This, for me, is one of those. Since first stumbling on this recipe eight or so years ago (it initially appeared in Gourmet back in Nov. of 1990) I’ve made this cheesecake at least once a year and sometimes more — it’s had a starring role at every Thanksgiving dinner I’ve hosted since, and has even ended up as my contribution at various dinners I’ve been invited to. Maybe that doesn’t sound all that surprising, but here’s the thing: I’m not really that much of a cheesecake person. Okay, place a piece in front of me and my fork will probably find its way in there before too long, but where dessert is concerned there are lots of things I’d be inclined to reach for first — like anything with hot fudge, for starters. 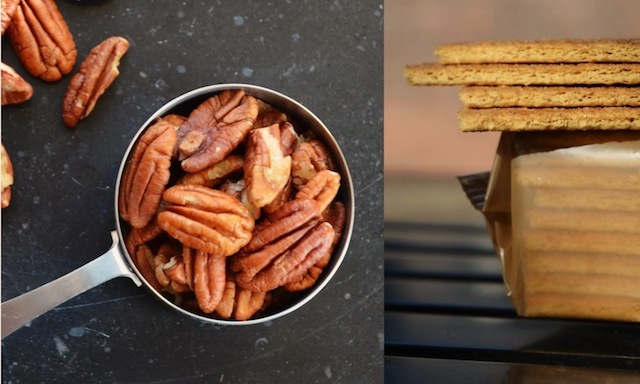 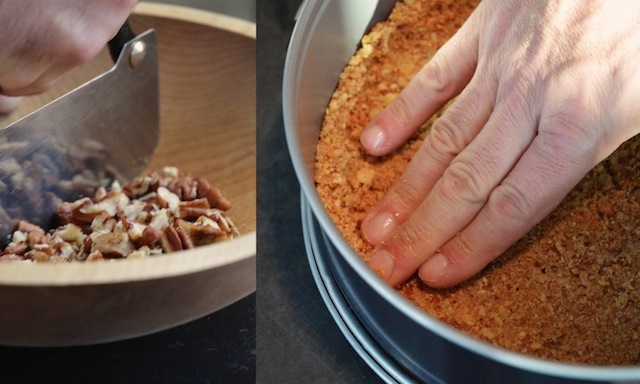 I mention all this for one simple reason: this is no ordinary cheesecake. For one thing, it’s lighter. For another, it’s way less dense. Those standard cheesecake characteristics — the heaviness, the density — may be qualities true cheesecake lovers may miss here, but I kind of doubt it. I mean, this still has the same creamy texture and the same pleasantly sour cream-cheese taste we look for in a cheesecake, just with an extra injection of air, as though the whole thing had been whipped (which, of course, it has). And what’s not to like about that, especially on the heels of two servings of turkey, mashed potatoes, stuffing, cranberry sauce, and who knows what else? Trust me, this is one Thanksgiving dessert that won’t leave you clutching your sides and announcing that you may need to make a trip to the emergency room (or am I the only one who ends Thanksgiving dinner with that pronouncement?).

A lot of this is due to the addition of the pumpkin, which lightens up the entire experience (pumpkin puree may be dense but it’s a lot less dense than a block of cream cheese), while at the same time imbuing the cake with a decidedly seasonal flavor that takes things in a bright new direction. Because let’s face it — cheesecake can get a little boring, just as the traditional Thanksgiving dessert lineup can seem a little whatever by this point. So here’s an alternative, one that takes the pumpkin pie classic of this food-focused holiday and gives it some new life. It also makes for one impressive looking cake, so you’ll have the pleasure of feeling like a truly gifted baker, even though the whole enterprise is a relatively simple one — which no one needs to know but you. 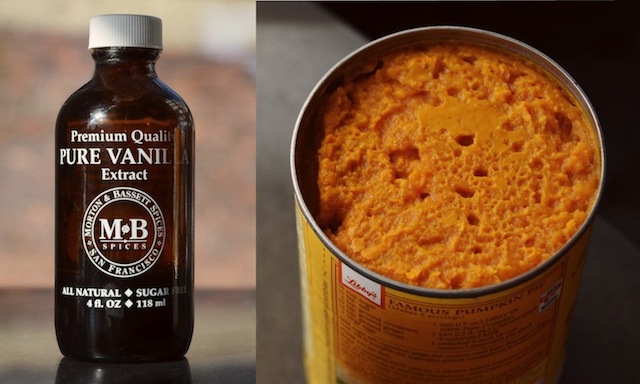 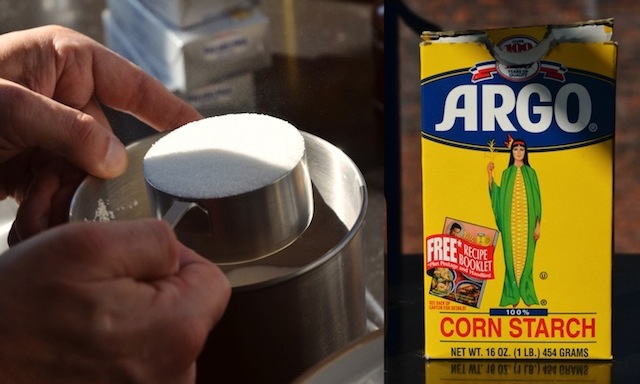 The only catch is that the cooking process requires a number of cooling/chilling stages (for a total of 8 hours), which means you need to allow yourself plenty of time to make the cake. In other words, this isn’t one of those desserts you whip up just before the guests arrive. This may actually be good news if you’re in charge of pulling together an entire Thanksgiving dinner, since it’s one item that actually needs to be crossed off your list in advance (in fact, the cake can be kept in the fridge, covered, for up to two days). Seriously, factoring in the time involved, as well as finding the requisite refrigerator space (challenging if you’re juggling birds, vegetables, stuffing, etc.), are the biggest hurdles here. The rest is pretty much, well, a cake walk.

You start with the crust, which is a mix of crumbled graham crackers, chopped nuts, brown sugar, and melted butter that’s then pressed to the bottom of a buttered springform pan, as well as a half-inch up the pan’s sides. Note that per the recipe’s instructions, in order to facilitate the removal of the cake once it’s been cooked and chilled you’ll need to invert the bottom of the pan at the start of this process. This means that rather than using the pan as designed with the base held in place by its locking mechanism, you’ll be flipping the base over so it aligns with the sides but is not secured by them. For obvious reasons this can make pressing the crust mixture to the pan somewhat precarious, but if you go slowly and keep the base and sides secure with your hand, you shouldn’t have a problem (and if things slide around, the crust is easy enough to repair).

Also, while the recipe suggests placing the assembled cake on a baking sheet just before sliding it into the oven (to collect any drips), I’ve found it’s best to do this at the outset, before even assembling the crust, as the less you have to handle the pan and its delicate contents the better. And if any of this is starting to give you second thoughts, let me just say that once cooked and cooled the mixture takes on a candied, toffee-like quality that gives the cake a welcome bit of crunch and a concentrated hit of sweetness — just the thing to balance the creamy, mildly sour taste of the pumpkin/cream cheese filling. (I’m probably also making this process sound far more complex and involved than it really is, so know that as well.) 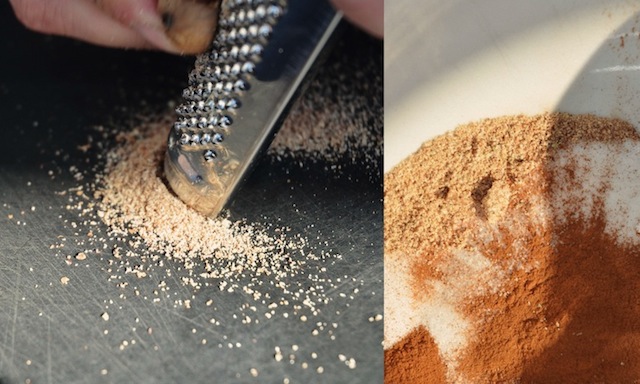 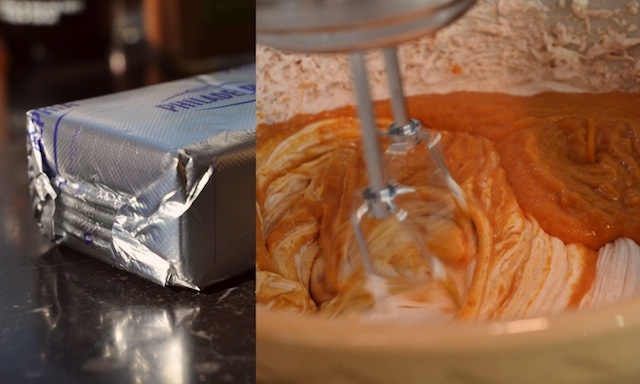 While the crust chills you can proceed with making the filling, which involves whisking the pumpkin puree, the eggs, the brown sugar, the cream, and the vanilla (bourbon, too, if you’re using — I tend not to). In a separate bowl you then stir together the remaining dry ingredients, to which you add three packages of cream cheese (note: make sure these are at room temperature to facilitate mixing) and beat with an electric mixer until smooth. Once done, you add the pumpkin mixture and pour this into your cake pan. This in turn is slipped into a 350 degree oven (already on that cookie sheet to collect any drips), and baked until the center is just set and your kitchen starts to smell all grandmotherly with the combined scent of cinnamon, nutmeg, and brown sugar. Hello holidays.

Let the cake cool for five minutes while you whisk together the topping — a simple mixture of sour cream and sugar — that you then spread across the top of your cake, at which point the whole thing goes back in the oven for another five minutes, until the top looks all melty and smooth. And now it’s time for that lengthy cooling process I mentioned earlier, a step that calls for letting the cake rest for three hours on a rack on the countertop, then at least another four hours in the fridge (covered with plastic wrap). During this time the topping will harden into a soft enticing glaze, the filling will firm up and deepen in flavor, and the crust will take on that crunchy, addictive quality I mentioned earlier — a bit like a Heath Bar, only better. In other words, those seven hours are worth the wait!

When the moment finally arrives to unbuckle the pan and release the finished cake from bondage, it’s a little like unwrapping a gift; so much time has gone into the process that you can’t help but feel at least a degree of excitement about the big reveal — something that was as true for me last week as it was the first time I made the cake (and I’ve gone through this process at least ten times by now). Ease the pan off with care (you may need to use a thin knife to release the sides of the cake), decorate with a half dozen pecan halves, then stand back and admire your work: three perfectly imperfect layers of crust, filling, and topping. Trust me — it will taste even better than it looks. 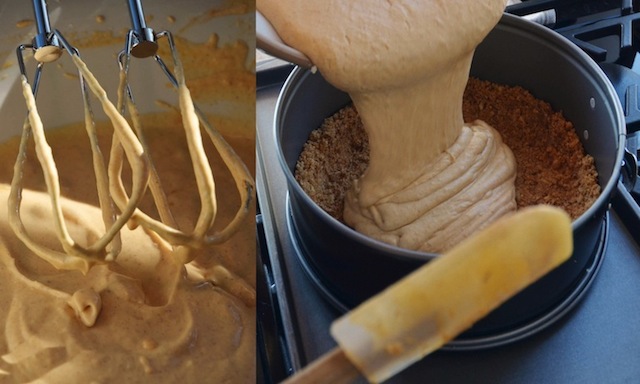 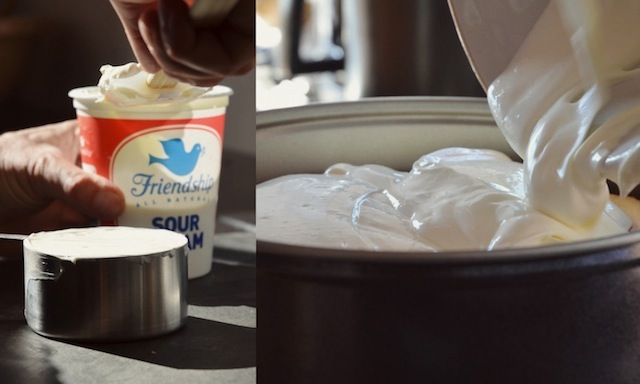 Directions for crust:
—Invert bottom of a 9-inch springform pan (to create a flat bottom, which will make it easier to remove cake from pan). Then lock on side and butter pan.
—Stir together crumbs, pecans, sugars, and butter in a bowl until combined well. Press crumb mixture evenly onto bottom and 1/2 inch up side of pan, then chill crust 1 hour.

Directions for filling and baking:
—Put oven rack in middle position and preheat oven to 350 degrees.
—Whisk together pumpkin, eggs, brown sugar, cream, vanilla, and liqueur (if using) in a bowl until well combined.
—Stir together granulated sugar, cornstarch, cinnamon, nutmeg, ginger, and salt in a large bowl. Add cream cheese and beat with an electric mixer at high speed until creamy and smooth, about 3 minutes. Reduce speed to medium, then add pumpkin mixture and beat until smooth.
—Pour filling into crust, smoothing top, then put springform pan in a shallow baking pan (in case the springform leaks). Bake until center is just set, 50 to 60 minutes. Transfer to a rack and cool 5 minutes (leave oven on).

Directions for topping:
—Whisk together sour cream, sugar, and liqueur (if using) in a bowl, then spread on top of cheesecake and bake five minutes.
—Cool cheesecake completely in pan on rack, about 3 hours.
—Chill, covered, until cold, at least 4 hours. Remove side of pan and bring to room temperature before serving.
—Garnish with pecan halves.

Note: Baked cheesecake can be chilled, covered, up to 2 days. 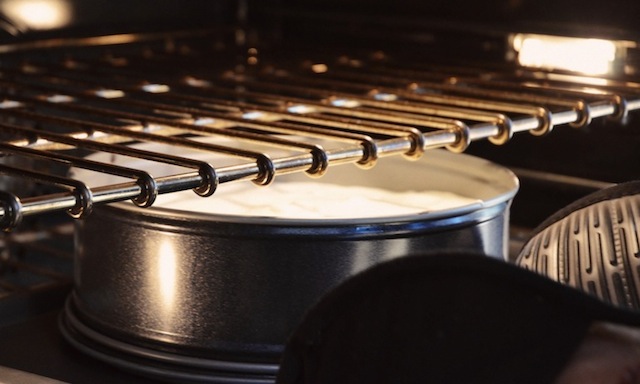 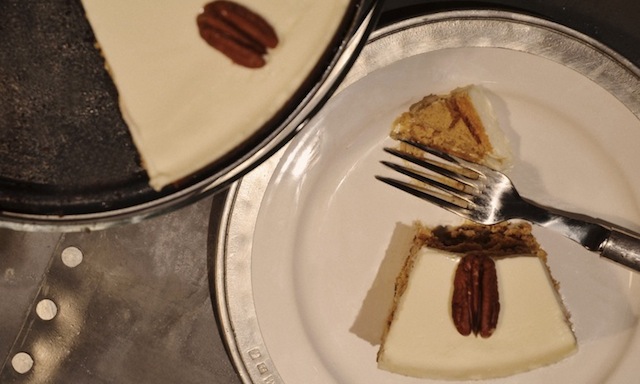