From Fine Cooking (click here to view the recipe)

I don’t get to L.A. all that often — maybe once or twice a year, if that — but on those occasions when I do, a favorite thing to do there is visiting the Farmer’s Market, the one at Third and Fairfax. Of course, without access to a working kitchen, these excursions are generally less about shopping for some future meal (though I’ve been sorely tempted by some of that gorgeous California produce on occasion) then they are the immediate gratification of buying something that can be savored on the spot. And believe me, there’s no shortage of things to choose from in this arena. Years ago, while staying in West Hollywood with Alfredo for a long weekend, we got into the routine of starting each day at a Tex Mex operation that was set up along one side of the market, just a long counter and a few tables and chairs (plus a wall of signed and framed movie stills — very Hollywood). And, oh yes, some very good food, too. I was so enthralled with the place — and particularly with their breakfast burrito — that I vowed to quit my magazine job as soon as I returned to New York and open my own offshoot of the operation.

Well, that idea evaporated as soon as we landed at LaGuardia, which was probably a good thing for lots of reasons, not least of which is the fact that the restaurant itself closed up shop a few years later. Still, they were on to something with that breakfast burrito, and the memory has lingered these many years. Of course, a breakfast burrito is not in and of itself all that complex — after all, it’s just a flour tortilla stuffed with some sort of bean mixture, a little grated cheese, eggs, maybe a slice or two of avocado, and if you like, a few splashes of salsa. But when you’re dealing with something as basic as this, the room for error is slim. In other words, it’s critical that you get the ratio of the various ingredients just right, and that they be of the best quality. So even with the right recipe in hand, there’s still the challenge of finding a ripe avocado and a good, juicy tomato — no small feat during an east coast winter. Better to stick with scrambled eggs and a toasted bagel. 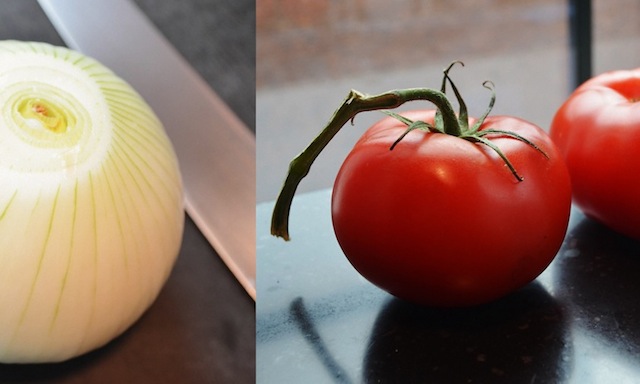 That’s what I told myself anyway, as repeated samplings of various breakfast burritos closer to home failed to turn up anything that approximated my Farmer’s Market memory. Or perhaps certain foods just taste better on a cool, California morning. Either way, as unassuming as it might be, the burrito took on for me a kind of prohibitive, don’t-try-this-at-home aura. That is until I stumbled on the following recipe while poking around the Fine Cooking website. As near as I can tell, it’s not a recipe that ever ran in the magazine but rather comes out of a book the publication released in the fall of last year, under the misleading title of Just Tacos. (I mean a burrito is not a taco… is it?!)

Anyway, the recipe underscored just how silly this hands-off approach has been, while also reminding what it was that I liked so much about my California burrito eating experience in the first place. Let’s start with the obvious: the simple but no less inspired pairing of scrambled eggs with some sort of saucy bean mixture. This is one of those Fred and Ginger combos that just defies logic in its overall compatibility — the taste and texture of the beans serving as a bullhorn for the mild flavor of the eggs. In the Fine Cooking recipe this contrast is enhanced by the addition of a chopped tomato, two chipotles in adobo (also chopped, and easily located at most markets these days) and some sautéed onion to the beans (I went for pinto but black is also fine). And while I’m sure I could have found a better looking tomato cruising any number of LA markets, as you can see from the photo above, the one I located here was more than up to the challenge. (Ditto the avocado — yes, ripe! — which comes into play a little later).

As for the eggs themselves, the recipe suggests that you remove them from the heat when they’re still a little moist, which also plays to the egg/bean combo’s strengths. Now I happen to know a number of people for whom the sight of a wobbly egg can make their own legs go wobbly (I live with one) but the benefit of working with “wet” eggs here can’t be over-emphasized. For one thing it allows the eggs to better merge with the sauce surrounding the beans. And for another, when you’re wrapping warm ingredients inside a warm tortilla there’s bound to be a little more cooking going on, so a wet egg will firm up, while an already dry egg will just get drier (and that makes my knees go wobbly). 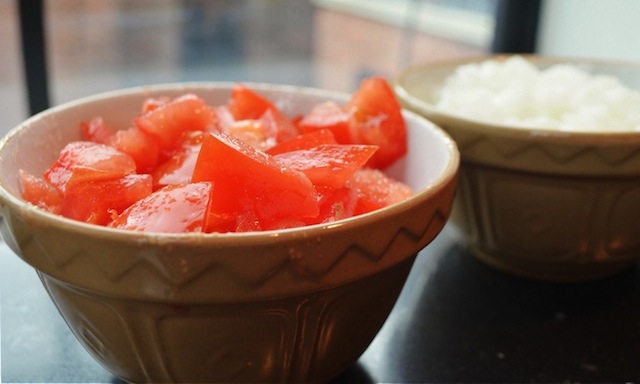 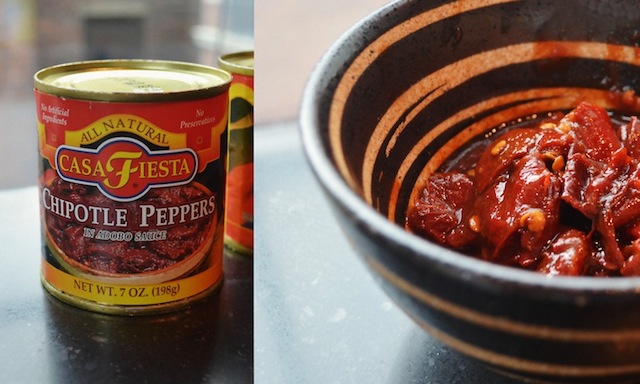 To all of this you add the cool earthiness of sliced avocado, the bite of chopped cilantro, and a generous sprinkling of grated Monterey Jack cheese — one of the other things I liked so much about my Farmer’s Market burrito and a cheese that only improves when it gets all gooey (as it does here). The melted cheese binds the various interior ingredients together, while the warm tortilla keeps everything assembled in a more or less manageable fashion, depending on how adept an eater you are. Either way, a plate and a napkin are a good idea. So too is assembling the burrito with a tortilla that’s either 10- or 12-inches around, as recommended by the recipe. I used one closer to 6-inches (just my luck, the market was out of the larger) and while my carb intake may have benefitted from the smaller size, getting burrito to mouth proved a little more challenging. (It also made for a somewhat less alluring “beauty” shot, as the opening image attests — a burrito made with a six-inch tortilla just won’t stay closed!) Still, even with half the contents of the burrito scattered about my plate, I couldn’t have been happier. It’s nice to know you don’t have to fly to the other side of the country to taste a little west coast sunshine. 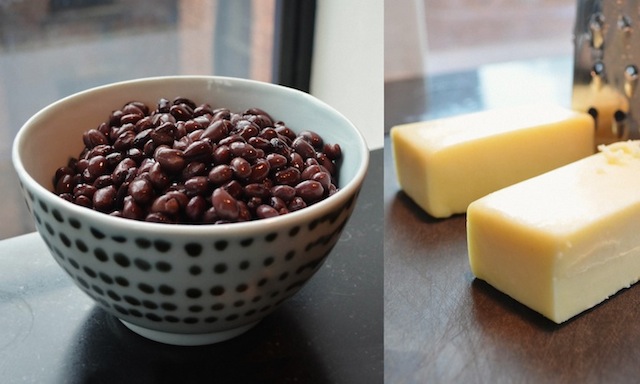 Directions:
—Heat oven to 350 degrees. Wrap the tortillas together flat in foil and heat in the oven until warm, 10 minutes.
—While the tortillas are heating, heat 2 tbs. of the oil in a large, heavy skillet over medium heat and cook the onion, stirring, until golden, about 10 minutes. Add the tomato, chipotles, beans, and ½ tsp salt and cook, stirring until heated through, for about 5 minutes. Set aside.
—In a medium nonstick skillet, heat the remaining 2 tbs oil over medium heat. Scramble the eggs and crema or milk with a fork and add them to the pan. Cook the eggs, stirring, until curds form, season with the remaining ¼ tsp salt, and remove from the heat when they’re still slightly moist.
—Lay a warm tortilla flat and arrange the fillings in a row side by side: ¼ of the eggs, ¼ of the bean mixture, ¼ of the cheese, ¼ of the sliced avocado, and ¼ of the chopped cilantro. Fold up the bottom of the tortilla over some of the filling and fold in the sides to make an open package. Repeat with the remaining tortillas and serve immediately.

Note: If eggs aren’t your thing, or if you want to make this into a rice and beans burrito, substitute 2 cups of warm cooked rice for the eggs. 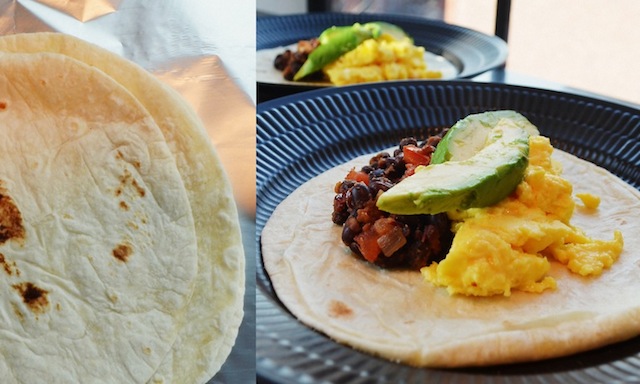