From the Sept., 2011 Bon Appetit (click here to view the recipe) 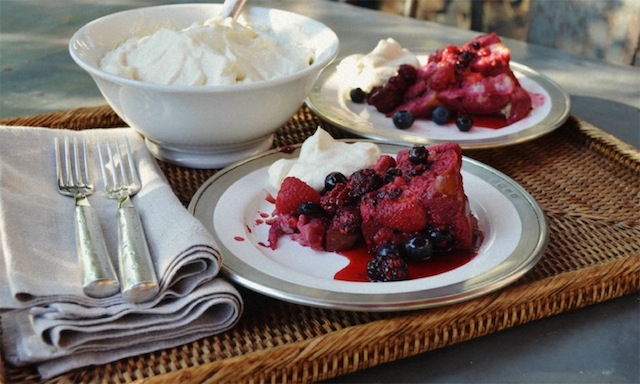 The weather in New York City has turned suddenly cooler and gray. Between this and the fact that Labor Day has now come and gone, there’s a pervading sense that summer has packed up her flip-flops and headed for the other side of the Equator. This is not a happy feeling. Despite the fact that I’m frequently accused by my nearest and dearest (Alfredo, are you reading this?!) of being a fan of cold, soggy weather, it’s hard not to view the passing of the sunny season with a degree of melancholy. Because while I may find some pleasure in slipping-on a heavy sweater, all things being equal I’d just as soon be eating an ice cream cone and wearing a bathing suit.

Still, the party’s not over just yet. According to the calendar we officially have until the 23rd — that’s two more weeks in case you haven’t done the math! This means that if you’ve already begun thinking of pumpkins and Brussels sprouts, your cerebellum is jumping the gun. Which is one reason I wanted to make this summer berry pudding with such urgency. For starters there’s the beauty of the thing — all reds and purples and so defiantly summery. And then there’s the fact that the recipe calls for a total of eight pints of pretty much every kind of berry you can think of. Let me repeat that: eight pints! I mean maybe you’ve bought that many berries at a single shopping before, but I hadn’t and let me tell you — it’s a lot of berries! Which created its own kind of pleasure, because at the back of my head was the knowledge that the local stuff — the sweetest berries with the really intense color — won’t be around that much longer. 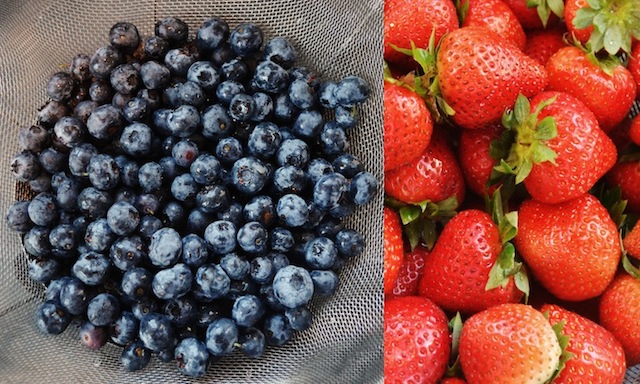 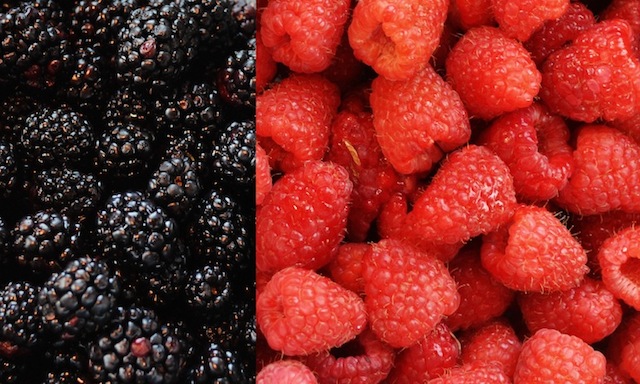 But first a few sentences about pudding, a word I’m tempted to put in quotation marks here, as this pudding is not like the ones we typically think of when we hear the word — meaning the chocolate or butterscotch varieties, or the kind Bill Cosby used to shill on TV. This pudding is more akin to bread pudding, which is often made with day old bread, then soaked in a custard and sprinkled with a generous amount of sugar, before a slow bake at low heat. So it’s similar to that, but also different in two principal ways: first, this pudding comes together in the fridge and not the oven (in other words, there’s no baking involved); and second, this version does not call for a custard but rather an intensely flavored berry sauce — the product of all that fruit you just bought, cooked down over low heat with some sugar, water, and the contents of a vanilla bean. 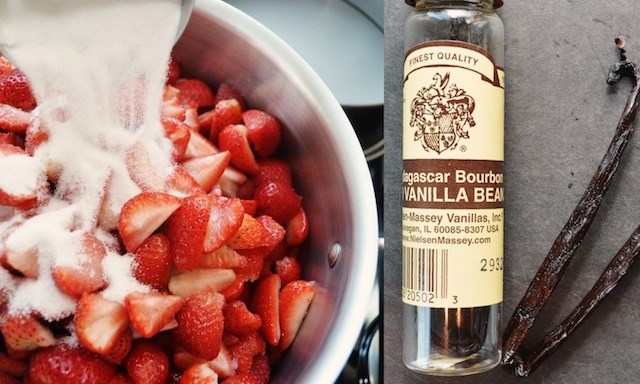 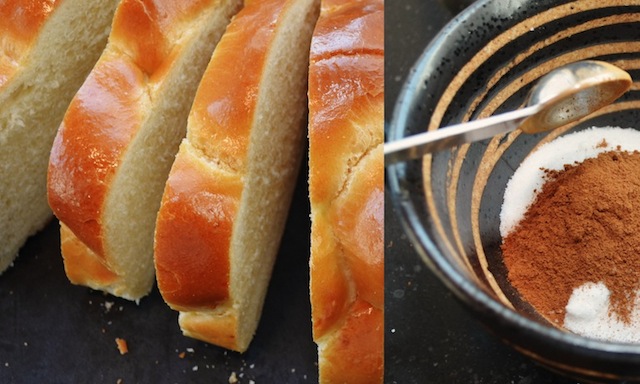 That sauce is one of the joys here, as the cooking process only partially breaks down the berries, leaving most of them more or less intact. The net result is a tartly sweet (or sweetly tart) sauce that’s syrup-thick and studded with tiny capsules of intensely flavored fruit. This is good all-on-its-own, not unlike the berry soup my mom served (disastrously) to my stepfather’s Mid-western family one Thanksgiving long ago. In fact, as I was making the sauce my spoon kept moving from the pot to my mouth, until I reminded myself that the fruit mixture was intended for another, higher calling.

Which brings me to another of the pleasures of this recipe, namely the way that berry sauce transforms the body of the pudding. This starts out in the form of a loaf of brioche or challah bread, and while my instinct is that of these two options the sweeter brioche is the better way to go, I was only able to locate a challah in loaf form, and so went with that — to good results. But whichever option you choose, the juice will serve to miraculously sweeten and moisten the bread, transforming it into a cake-like substance that’s also a pleasingly hallucinogenic shade of purple. 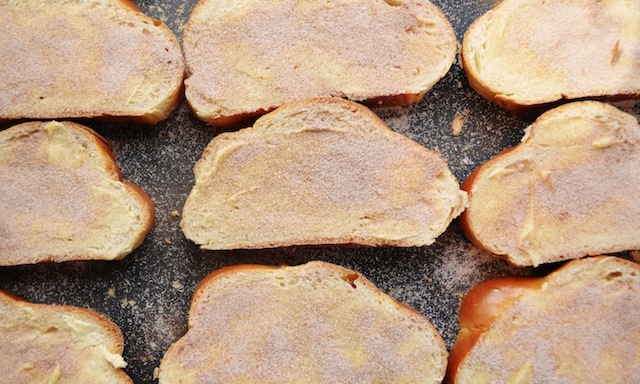 This is simply a matter of a little refrigerator alchemy. Once sliced, the bread is buttered generously, dusted with a mix of sugar and ground cinnamon (its own small reward, should you have any left over), and used to line the bottom of a springform pan, previously covered with plastic wrap and drizzled with some of the juice. The bread slices are then doused with more of the fruit mixture, and the whole process is repeated twice more, until the pan is packed to brimming with the sliced bread and the berry juice. At this point your work is nearly done — all that’s left is to weigh the whole thing down with a plate (I added a bag of beans to be sure the contents of the pan sank sufficiently), and slide it into the fridge for an hour at the minimum, or two days at the most. Either extreme is fine, though keep in mind that the longer the pudding is allowed to chill, the more certain you’ll be that the bread fully absorbs the color, and the flavor, of the juice.

While the recipe’s instructions regarding the addition of the “berry juice” left me scratching my head as to whether it meant by this juice alone or juice with some of the fruit included, I ultimately found that a mixture of both worked just fine — as long as each slice received enough liquid that it assumed the color of the fruit. In any case, once the pudding is assembled you may well find you have some of the fruit mixture left over, as I did. If so, be sure to hold on to this, as it’s great for drizzling over any areas of the finished pudding that the juice has not reached, and is also good for serving atop each pudding slice. Add a dollop of sweetened whipped cream (the perfect foil for the tartness of the berries) and you have one happy end to summer — even if you’re not that happy about it ending.

Note: Smaller berries such as blueberries, blackberries, and raspberries do not typically come in pint containers but rather smaller sized ones, in a range of sizes. When shopping for the fruit, keep in mind that one pint equals 16 ounces (or 2 cups).

Directions:
Line pan with plastic wrap. Place on a rimmed baking sheet. Combine all berries, 1 cup sugar, and ½ cup of water in a large pot. Scrape in seeds from vanilla bean. Bring to a simmer, stirring to dissolve sugar. Simmer for 10 minutes. Set berry sauce aside.

Drizzle ½ cup warm berry sauce over bottom of pan. Line pan with a single layer of bread, cutting to fit as needed. Pour 1½ cups berry sauce over. Repeat layering two more times. Cover top with more juice, followed by a sheet of plastic wrap. Set a plate slightly smaller than pan on top of pudding to weight down, keeping bread submerged. Chill for at least 1 hour and up to 2 days. 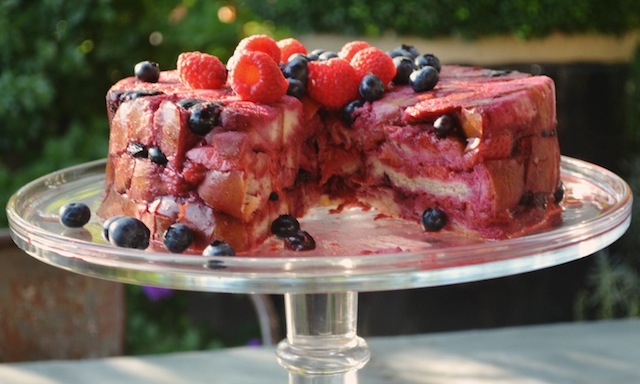 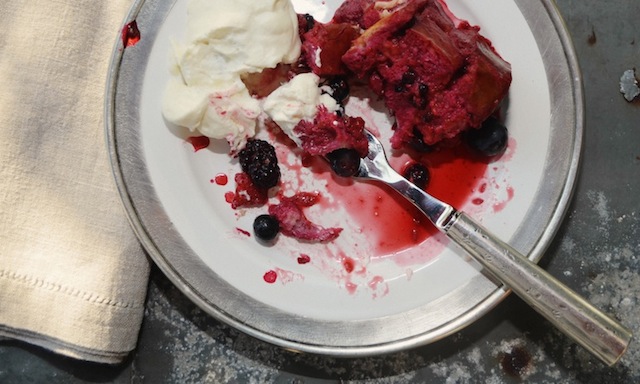