When it was announced a few years back that Gourmet was ceasing publication, I, along with many other food lovers, treated the news like there’d been a death in the family. That may seem like an over-reaction to the closing of a business I had no obvious connection to, but though I’d never worked for the magazine nor been close with anyone who had, Gourmet was responsible for instilling in me an early love of food, and later, with actually teaching me much of what I know about preparing it. Losing the magazine meant saying goodbye to both a trusted instructor, as well as a constant source of inspiration.

The good news is that for the last ten years of its life I’d been clipping both individual recipes and complete menus from the magazine (on average, three or four items per month — enough to fill two large binders). To this day, many remain among my very favorites, and over the coming months I’ll be sharing some of these with you. 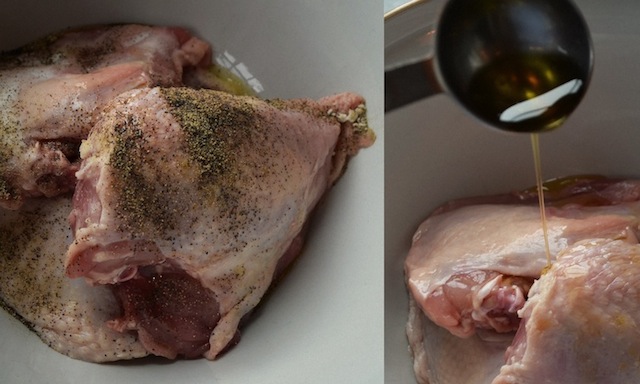 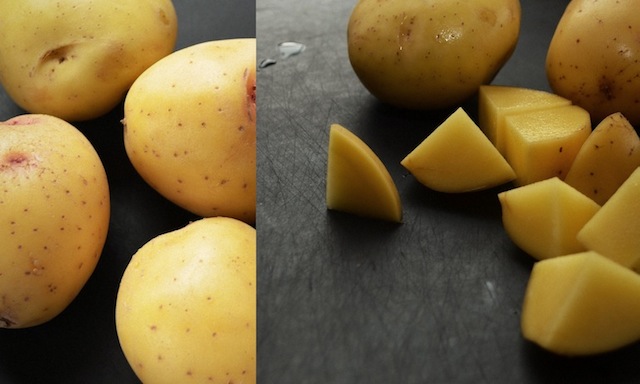 The attached recipe for roast chicken and vegetables would probably be at the top of that favorites list. Like so much of what Ruth Reichl published in the pages of the magazine during her ten-year tenure as editor there, it’s both easy enough for any novice to prepare, and complex-tasting enough to satisfy the cook who wants something more than just the same old roast chicken. It’s little wonder that I return to it anytime I need to throw a great tasting meal together with a minimum of effort.

In the “easy column” is the fact that the only thing the recipe asks of you is to slice some potatoes, zucchini, and onions; toss them and the chicken parts with some olive oil and seasoning; arrange the various elements in a pan (along with some freshly squeezed lemon juice mixed with chicken stock); and slide the whole assortment into the oven for a half hour or so. A one-dish (er, pan) meal at it’s very best.

And in the “taste column” is the fact that, once roasted, the generous coating of salt, pepper, and olive oil that’s been applied to the chicken pre-baking creates the kind of flavorful, crunchy exterior you hope for with a really good fried chicken. What’s more, a fast roasting (about a half hour) at high heat, with a final blast under the broiler, provides the chicken with a seductive, burnished sheen, while also sealing in much of those all-important juices. Paired with the roasted vegetables (particularly the caramelized onions), and offset by the acidity of the lemon in the pan juices, and you have the makings for an easy weeknight dinner that always feels like something special. 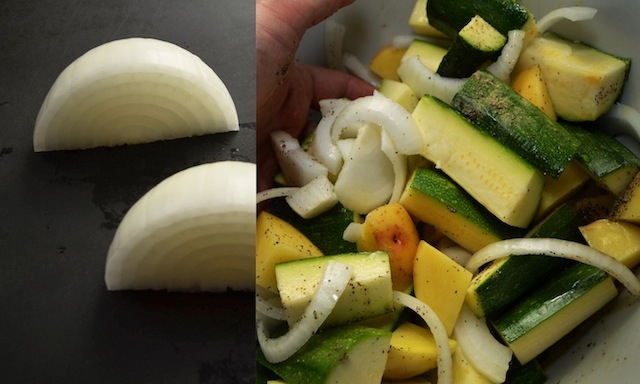 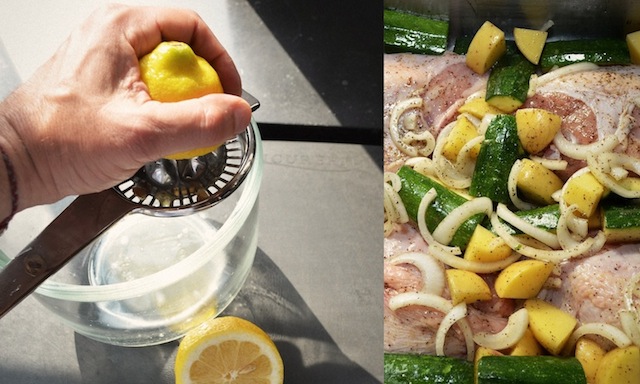 A few notes about the recipe: While Gourmet suggests using a quartered chicken here, I make it with bone-in breasts exclusively, as I prefer white meat over dark. The risk in making this switch, of course, is that you’ll end up with a pan of dry chicken (dark meat tends to be moister than the denser white meat), and there’s nothing less appetizing than that. But given the recipe’s suggested cooking time and temperatures, this has not proved an issue. Just make sure the total poundage of the breasts approximates what the recipe calls for (3- to 3 ½-lbs. total).

And while I have no complaints with the mix of vegetables Gourmet suggests here, I have, on occasion, substituted a few other items that I had floating around the fridge (carrots, cremini mushrooms, etc.), and all worked equally well. So play around with your favorite ingredients — this is a hard recipe to get wrong.

In terms of timing, the only thing that’s slowed me up is the final six minutes under the broiler, as this requires adjusting the oven’s temperature from 500 degrees to the broiler setting, something that can take my oven as much as a half hour. Given this, if you’re trying to keep to any kind of schedule, I suggest knowing in advance how long this adjustment will take with your particular oven and planning accordingly; if not, you may well end up eating later than you planned.

And lastly, when Gourmet says to halve the onion lengthwise, then cut it crosswise, what they mean is that the first cut should be from top-to-bottom (from stem to root), and that the second cut should be through the middle (the goal is to produce a nice pile of semi-circle slices, about a ¼ inch thick). This may seem self-evident to most of you, but as someone who’s screwed this up on occasion, I thought it worth clarifying. 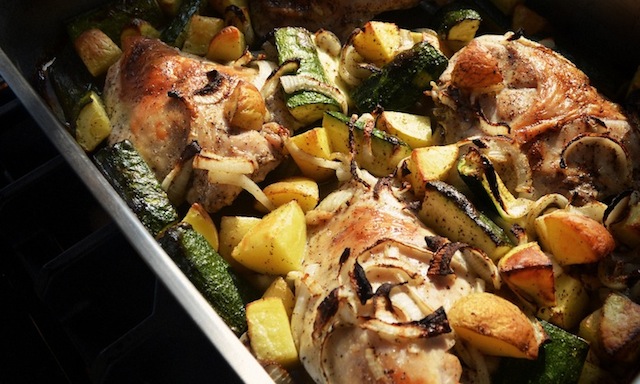 NOTE: I prefer to use all chicken breasts; precut chicken quarters is also fine.

Directions:
—Put oven rack in upper third of oven and preheat oven to 500˚.
—Pat chicken dry, then toss with 1 tbs oil, 1¼ tsp salt, and 1 tsp pepper in a bowl. Arrange chicken, skin sides up, without pieces touching, in roasting pan, leaving a 2-inch border around edges of pan.
—Toss potatoes, zucchini, and onion with remaining tbs oil, remaining tsp salt, and remaining ¾ tsp pepper in same bowl, then spread in 1 layer around chicken, arranging zucchini skin sides up. Stir together broth and lemon juice and pour into pan around chicken and vegetables.
—Roast, uncovered, until chicken is pale golden and cooked through, about 30 minutes.
—Remove pan from oven and preheat broiler. Broil chicken and vegetables 3 inches from heat until chicken is golden brown, about 6 minutes. Serve chicken and vegetables with pan juices. 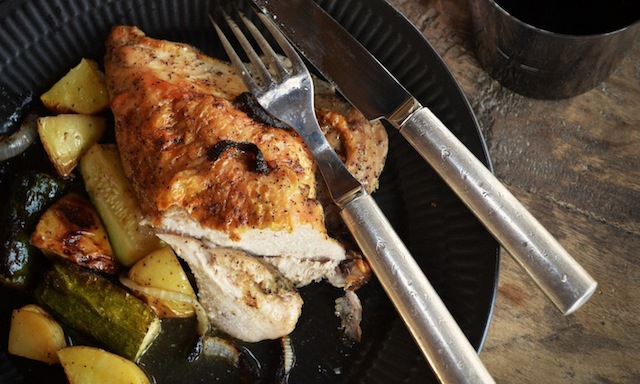