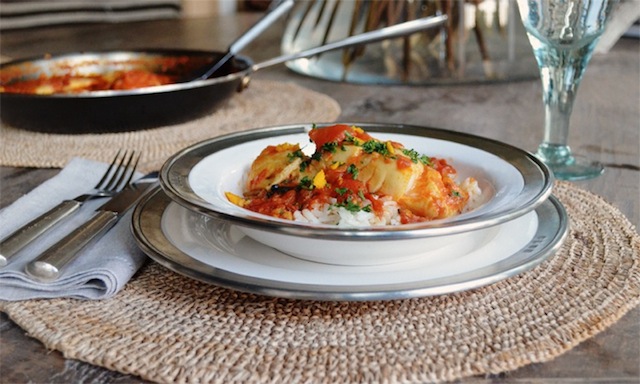 Last night I ate an amazing meal at a little restaurant in the West Village called Buvette. It’s a narrow spot and generally pretty crowded at dinner, which means I almost never get to go since the scale of the place and the fact that you typically have to wait for a (tiny) table are two realities of eating there that Alfredo can’t abide. Alf is the perfect dinner companion in most ways, but you don’t want to be standing beside him in a confined space waiting for food — trust me on this. So I’ve earmarked Buvette as a place for those evenings when I’m on my own with no other plans, which brings me to last night. Sometimes there’s nothing better than a solo meal at a bar!

That’s especially true when the food is as good as Buvette’s. Jody Williams is the chef-owner here, and she makes the kind of food I aspire to — elemental, homey, and full of flavor. I actually hate the word “homey” because it gets thrown around so much, but it applies here, since the food that comes out of Williams’ kitchen is the sort that might be created by any skilled home chef . . . especially if that chef lived in France. Initially I ordered the coq au vin and some stewed lentils, but then caught sight of the foie gras terrine spread across thick slices of grilled country bread and crowned by apples stewed in Sauternes, and had to have that, too. All this might sound very sort of turned-out (French can do that) but it wasn’t. What it was was casual and delicious — delicious in the way that really good ingredients that have been cooked with care and enhanced with other good ingredients (wine, bacon, butter . . . more butter) are delicious. I’d go back tonight if I could. 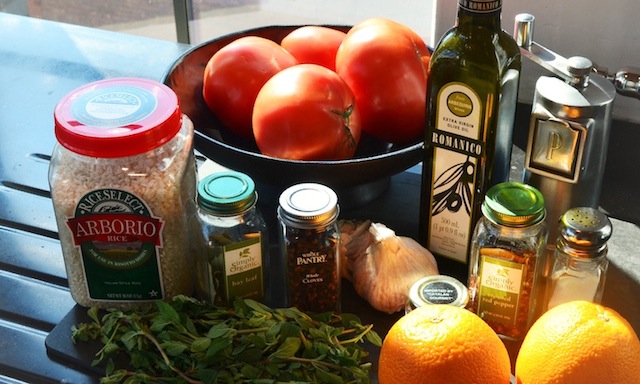 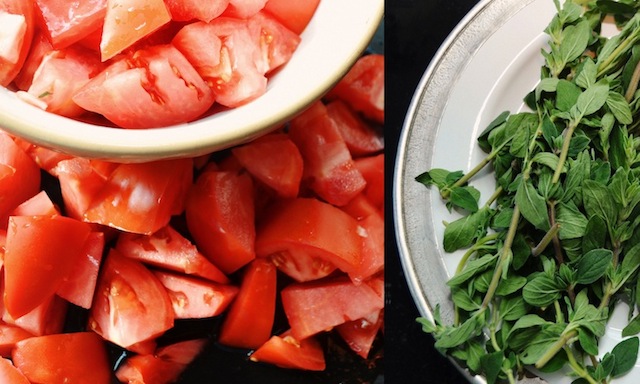 The recipe I’m bringing to you today did not come from Williams, nor is it French, but it is fuss-free and flavorful in a way I think she would appreciate. I pulled it from this month’s Food & Wine, and even though I’ve made it a couple of times now, I continue to think about it (in fact, this might be dinner tonight). And here’s why: flavor. Big flavor (or the lack thereof) is one of the reasons I so rarely order fish when eating out. Fish options on many restaurant menus often seem to have been created with the simple goal of satisfying those diners who like things mild, bordering on the bland. That scares me away, along with a fear that I won’t get enough to eat, since restaurant servings of fish also trend to the spa-like. I don’t have to worry about either of those issues when I make it myself.

Big flavor certainly didn’t seem like it would be an issue with this dish, one that calls for three pounds of tomatoes, cooked down with garlic, red pepper flakes, saffron, and a handful of fresh oregano. This was, after all, a dish being billed as having “Sicilian flavor.” Maybe so, but I still found myself adding increments of salt and red pepper to the pan, right up until serving. The next time I make it I could even see incorporating a handful of pitted green olives into the mix for a little extra salt. But as I’ve said, I like things with a certain muscularity of flavor — I was looking for the zest of the tomato sauce to hit me over the head here. You may like things a little more subtle, though, so let your palate be your guide.

And regardless of how heavy or light you go with the seasoning, this dish is deeply satisfying in the way of a big bowl of spaghetti in tomato sauce, but also considerably lighter. Both cod and halibut (you can take your pick here, though for what it’s worth I’ve opted for cod each time I’ve made it) are a flaky white fish that hold up well with bold flavors. And tomato sauce is always satisfying in my book. For this sauce you start by cooking up the garlic and red pepper flakes in olive oil, then, just as the garlic is starting to go gold and fragrant, you add the chopped tomatoes and saffron. Once the tomatoes begin to cook down (about 5 minutes or so), in goes the oregano, as well as some salt and pepper. This cooks over moderate heat for 35 minutes, with little meddling from you, except for an occasional stir and a flattening of the tomatoes with the side of your spoon. Once that’s done the fish is tucked into the sauce and cooked, until its opaque throughout (about 12 minutes total). 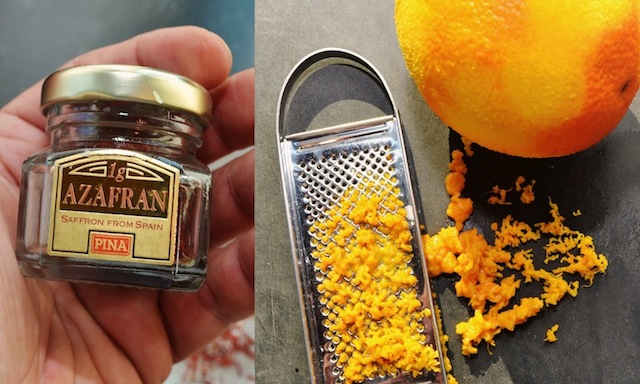 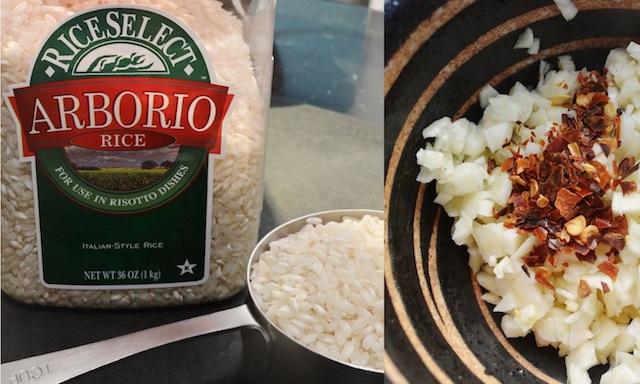 The only other step involves making the rice, which serves as a base for the fish and is also ideal for sopping up all that sauce you’ve labored over. To make sure the various components are ready at the same time, you’ll want to add the rice to a pot of boiling water about five minutes or so before the fish goes into the pan, along with a few strips of orange zest, bay leaves, cloves, and a hit of olive oil. These give the starch a mildly exotic quality — very southern Italy, or even Morocco. Once done, the rice is drained and returned to the pot along with some salt and a little more olive oil. And you’re ready to serve: Spoon some of the rice into a wide bowl, then layer with the fish, a generous serving of the sauce, and sprinkle all of it with some chopped parsley and some more of that orange zest (grated this time). And that’s all there is to it. A simple, healthy meal that won’t leave you feeling shortchanged in either the flavor or full-belly departments.

Lastly, a few final notes regarding the recipe: Although only one cup of rice is called for here, when I made this initially I found there was barely enough to satisfy even three people (the recipe is meant to serve 4). So unless you’re planning on limiting your guests’ carbohydrate intake, I suggest doubling the quantity listed, as well as the various ancillary ingredients.

Also, saffron is a critical flavoring component here, so make sure yours if fresh and the best quality. I used this one from The Ingredient Finder with excellent results. It’s produced in Spain’s La Mancha region by a company called Pina, who take pride in providing what they describe as pure saffron, as opposed to some other manufacturers who frequently mix it with other parts of the flower, adding weight but little else. But whatever brand you’re using, and whatever you’re using it for, saffron should imbue your dish with a subtle, earthy flavor, and a signature yellow coloring. If you’re not getting those qualities, then it’s time to invest in your spice drawer. 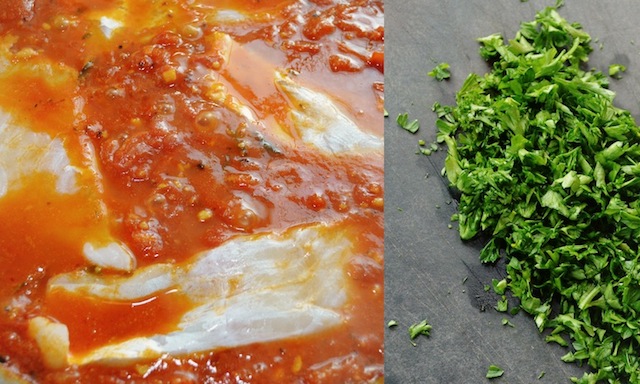 —Zest of 1 orange, in 1-inch wide stripes (you may want to double this), plus finely grated zest for garnish

—5 bay leaves (you may want to double this)

—3 whole cloves (you may want to double this)

—1 cup Arborio rice (you may want to double this)

Meanwhile, in a large pot of boiling salted water, combine the orange zest strips, bay leaves, cloves, rice and 1 tbsp of the olive oil and cook until the rice is al dente, 15 to 18 minutes. Drain the rice, discarding the zest, bay leaves and cloves. Return the rice to the pot. Add the remaining 1 tbsp of olive oil and season with salt.

Nestle the cod in the tomato sauce and cook, turning the fillets once, until just opaque throughout, about 12 minutes.

Spoon the rice into bowls and top with the cod and sauce. Sprinkle with parsley and grated orange zest and serve. 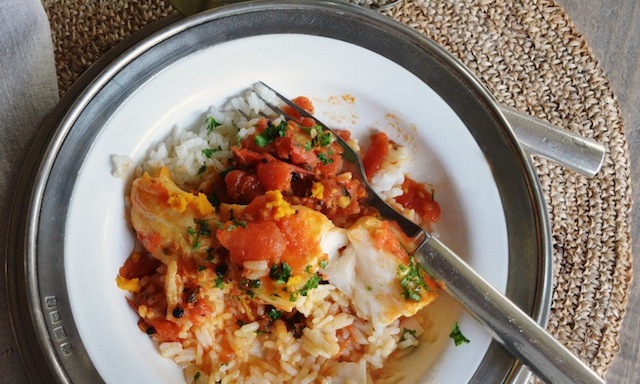