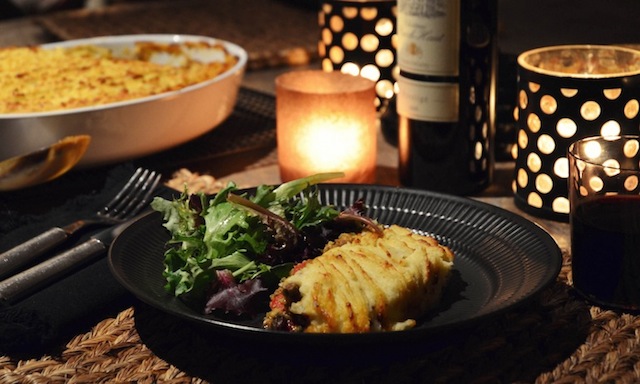 After nearly twenty-five years of being partnered with a Miami-born Cuban American, I’ve come to have a certain proprietary feeling for many of the national dishes he grew up with. Okay, maybe ropa vieja and arroz con pollo don’t have the same nostalgic pull for me as they do for Alfredo, but when it comes to the what-to-eat-on-a-Sunday-night-because-you’re-feeling-blue test (the ultimate comfort food yard-stick in my book) Cuban cooking is right up there for me with spaghetti and meatballs. Perhaps that’s why I felt entitled to take some liberties with one of my favorite Cuban dishes, picadillo. For anyone not familiar with this spectacularly satisfying (and easy) dish, it’s essentially ground beef that’s been added to a quick sauté of onions, peppers, and garlic (known as a sofrito — the foundation for most Latin cooking), then enhanced with a variety of savory ingredients such as olives, capers, tomato sauce, and white vinegar. I mean can you imagine a better combination? Of course, like most dishes that have been passed down from one generation to the next, nearly every Cuban cook has his or her own way of making picadillo (some add pork to the ground beef, others fried potatoes), but when it comes to serving it, the standard seems to be alongside a large quantity of white rice (with the possible addition of a fried egg on top). Either way, it’s a combo that’s hard to beat.

Still, as much as I love this dish in its classic form — and especially when accompanied by a serving of fried plantains and black beans — I wondered what would happen if you baked it in a casserole, crowned by a puree of something starchy. It was an idea that first started nagging at me as I flipped through the current issue of Fine Cooking and came across their recipe for cottage pie topped with mashed sweet potatoes.

Of course, the filling for both cottage pie and its cousin shepherd’s pie (the former is made with ground beef, the latter with cubed lamb) is similar to that of picadillo, in that all three involve sautéing the meat with a variety of aromatics, tomato (in some form or other), and a range of other ingredients, though it’s a similarity I’d never given much thought to, that is until I stumbled on that Fine Cooking recipe — or more specifically, the image that accompanied it. What’s more, it reminded me that as much as I’ve enjoyed the meat and lamb fillings in both cottage and shepherd’s pie, I’ve never enjoyed either as much as I have a good picadillo. Which prompted me to ask: why not introduce a little Latin beat into these staid English classics?

Nailing the filling would be easy enough — true Cuban cooks may work from closely guarded family formulas, but I’ve always followed the picadillo recipe found in A Taste of Old Cuba, and it’s never failed to deliver. No, the bigger challenge was what to layer over top. This proved something of a puzzle, as in my (albeit limited) experience of Cuban cooking, mashed or pureed anything has never really had a starring role (the one exception: yucca, which I deemed too fibrous to work here). Might this perhaps be an occasion for the sweet potato topping used in the Fine Cooking recipe? I knew from Alfredo that the starch was one he’d eaten each year at his family’s Thanksgiving dinner (pureed and studded with marshmallows), though that didn’t exactly convince me of its Cuban bona fides, much less that it would do the trick here. 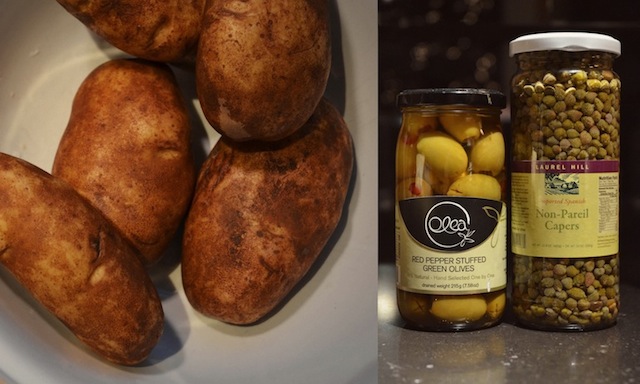 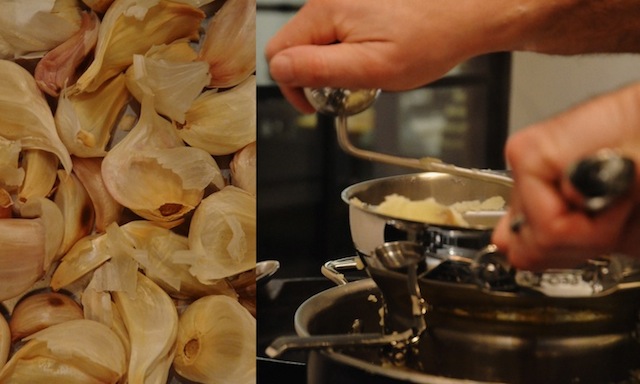 Unsure, I reached out to someone I felt could fill in the gaps in my limited Cuban cooking catalog — Alfredo’s sister, Anika. She quickly shot down the idea of sweet potato as (just as I had feared) it tends not to show up much in the national larder. Instead, she threw out the name of something I’d never heard of, much less tasted: malanga. A quick Internet search revealed this to be a root vegetable popular in the tropics and South America that can be found in the US at “Latin American markets” — not exactly Cuban and, from the sound of it, not exactly easy to find, but perhaps the answer nonetheless. I’m not quite sure what makes a market “Latin American” but none of the ones I know that carry Latin American brands and/or ingredients were familiar with this particular vegetable. So I again threw my net wide, asking a Dominican friend who lives in Queens if he knew where I could find the tuber — the next day, six showed up at my door. My malanga moment had arrived.

Now here’s something you should know about uncooked malanga — it isn’t pretty. That was my reaction, anyway, as I stared at what looked like nothing so much as a dirty potato in need of a shave. But cut it in half and the tuber reveals a sweet, slightly melon-y smell, along with pale pink flesh the texture of eggplant. And, suggesting that the vegetable might be more common to Cuban cooking that I’d originally thought, I discovered that my cookbook did, in fact, offer a recipe for mashed malanga — one I followed to a point, cutting the vegetable in thick slices as directed, then placing the peeled rounds in a pot of boiling water. But when it came to the final step, I decided the preparation called for a little doctoring, replacing the suggested milk with half-and-half, and adding a handful of roasted garlic into the mix for good measure. The additions were sound ones, and the finished puree was rich, creamy, and full of flavor – similar to mashed potatoes but with a hint of sweetness. It was just the thing to top my picadillo pie (which, by the way, a series of forkfuls had already convinced me would soon be touted as one of the great inventions of 2012… I mean, they give awards for these things, right?!). 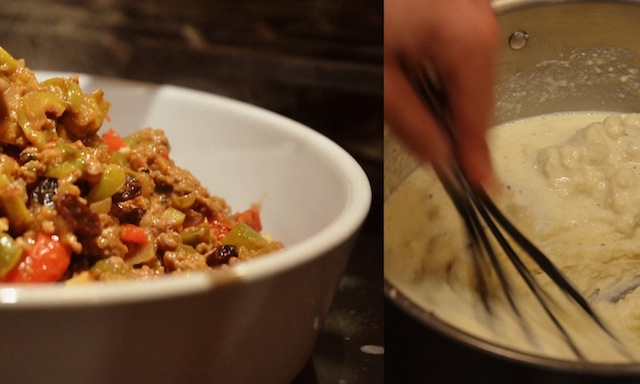 But given the challenges I’d encountered trying to locate malanga in the melting pot that is New York City, I couldn’t assume others around the country would be able to land their hands on any. So an alternate version of the dish was clearly in order — one that I decided to top with garlic mashed potatoes instead (based on a crowd-pleasing recipe from America’s Test Kitchen). Of course, standard potato doesn’t show up in Cuban cooking any more than sweet potato does, but I figured the addition of the garlic would at least take it in a Latin direction. And while the potato variety presented something a little less exotic than the malanga, it too proved an appealing counterpoint to the acidic tang of the beef mixture. (Directions for both options are included below.) Award or no, both versions had earned a permanent spot in my personal Cuban/American cookbook.

A few final thoughts about the recipe: to get the proportion of meat to starch correct I ended up doubling my picadillo recipe (which serves six), so if you’re interested in trying the dish in its traditional form and are only looking to feed that number, feel free to cut the recipe listed below in half. Also, don’t underestimate the importance of using very lean meat here, as too much fat can (and likely will) lead to a smoke filled kitchen once the casserole meets your oven. Lastly, while raisins (a key ingredient in any picadillo) may seem odd in the company of a mashed potato topping, bear in mind that once cooked alongside the meat and other ingredients, their concentrated sweetness dissipates, taking on the combined flavors in the pan. In other words, they’re a good addition. Still, if you just can’t get past the idea, they can always be omitted.

Note: Malanga is a root vegetable popular in the tropics and South America, and can be found in the US at many Latin American markets. It’s generally about the size and shape of a regular russet potato, while the interior can vary in color from cream, yellow, or pink. Although the texture is extremely crisp, once cooked it produces something lighter and flakier than a standard potato. Malanga can be baked, mashed, fried, or otherwise used as you would a potato.

Directions for the picadillo filling:
—Heat oil in a large skillet over medium heat. Saute the onion and green pepper until the onion is translucent, about 3 minutes. Add the garlic and cook 2 minutes more.
—Add the beef and break it up well; there should be no lumps. Stir in the tomato sauce, olives, raisins, capers, vinegar, sugar, salt, and pepper. Reduce heat to low, cover, and simmer for 20 minutes, or until the consistency is like that of sloppy joes.

Directions for the topping:
—Toast garlic, covered, in a small skillet over low heat, shaking pan frequently, until cloves start to go dark and are slightly softened, about 20 to 25 minutes. Off hear, let stand, covered, until fully softened, 15 to 20 minutes. Peel cloves and, with paring knife, cut off root.
—While garlic is toasting, place potatoes or malanga in a large saucepan and cover with 1 inch water. Bring to boil over high heat; reduce heat to medium-low and simmer until tender (a paring knife can be slipped into and out of center with little resistance), 20 to 30 minutes. Drain. Let cool.
—Set food mill or ricer over now empty but still warm saucepan. If using potatoes, spear with fork, then peel back skin, cut into chunks, and drop into bowl of ricer or food mill; if using malanga, simply cut into chunks and drop into bowl of ricer or food mill. Add toasted garlic and puree along with the potatoes or malanga into saucepan.
—Stir in butter with wooden spoon until incorporated; gently whisk in half-and-half, salt, and pepper to taste.

Directions for final assembly:
—Position a rack in the center of the oven and heat to 425 degrees.
—Transfer the meat mixture to a 2 qt. sized baking dish. Spread the potato or malanga mixture over the top in an even layer making a pattern with the tines of a dinner fork, then place on baking sheet to catch any drips. Bake until bubbling around edges, about 30 minutes. Switch to broil setting and position rack about 6 inches from the broiler element. Broil until starch topping is lightly toasted, 2 to 4 minutes.
—Let cool at least 15 minutes. 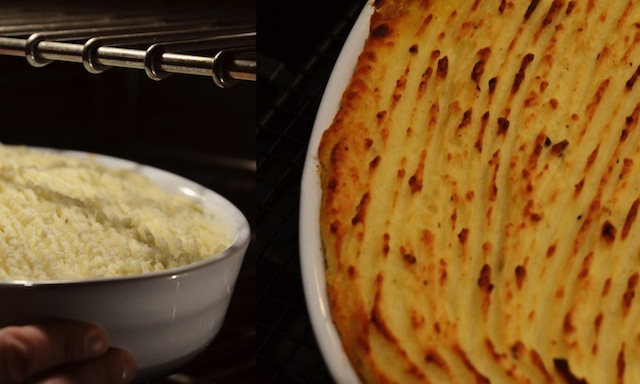