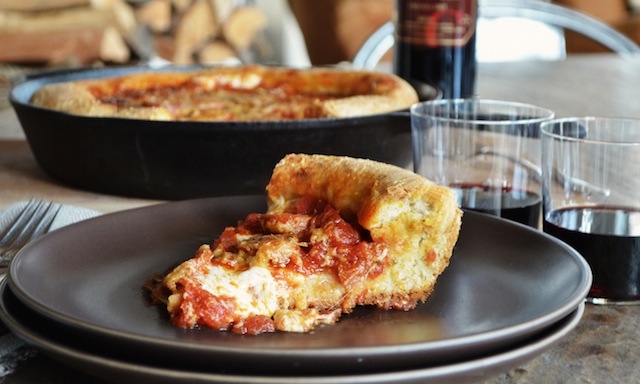 One of my earliest memories is of throwing a tantrum so epic that despite reasoning, pleading, and finally multiple angry warnings, my mom had no choice but to haul me out of the West Philadelphia swim club where we were spending our Sunday afternoon and drag me home. The reason for all the drama: being told that no, I couldn’t have pizza for dinner. That’s right folks, I threw a forty-five minute fit for no other reason than I couldn’t have what I wanted for dinner—embarrassing, to be sure, but at least I’m consistent in my enthusiasms, both for food in general and for pizza in particular. Because while I may be better equipped to handle whatever emotions come up for me around mealtime these days, the site of a long line at a favorite restaurant can still cause my heart to quicken, and it’s a reaction that’s all the more pronounced when there’s pizza on the menu. Which makes it a little surprising that it was only recently that I began to experiment with making pizza in my own kitchen (and by that I don’t mean the kind that you find in the frozen foods section of the grocery store). 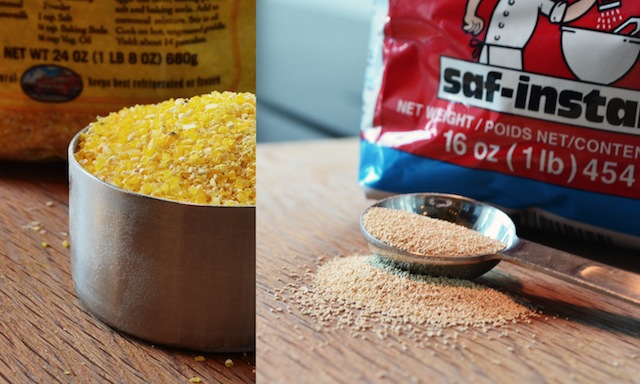 I suppose one reason for the delay was the idea that pizza making required some special set of skills, like being able to throw a spinning wheel of dough six feet into the air. Or maybe it was a belief that the process called for a variety of specialized equipment, like a large and unwieldy pizza stone—precisely the sort of luxury I don’t have room for in my New York City kitchen. That neither assumption was true is something that gradually dawned on me over the past year, aided in large part by the various pizza making features that appeared in a number of the cooking magazines during that time (the March issue of Bon Appétit and the April/May issue of Fine Cooking, to name a few). Still, if those stories provided the spark, then it was a recipe from the Lidia Bastianich cookbook Lidia’s Italian in America that fanned the flames. It’s a collection that’s packed with the sorts of tantalizing Italian-American recipes I’ve always had a weakness for, among them one for a Chicago-style deep-dish pizza I couldn’t stop thinking about. Ultimately, it was that recipe that drove me into the kitchen (and through my pizza making anxieties), and it’s the one I bring to you here. 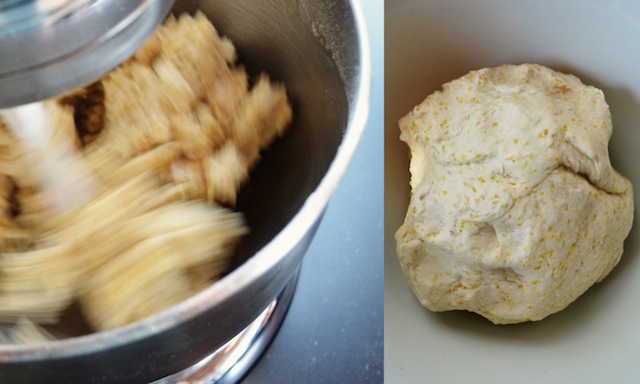 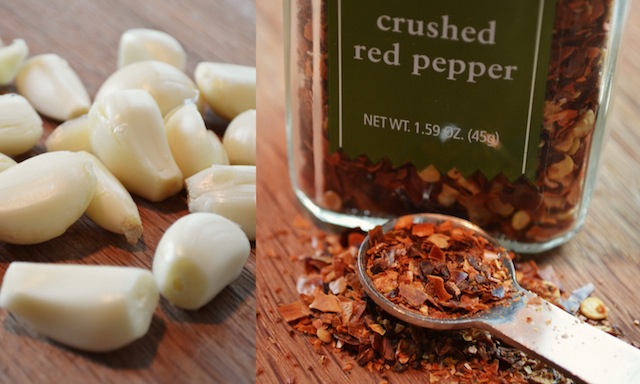 I should start by assuring you that this recipe is easy, and that the end result is every bit as gratifying as the words “deep-dish pizza” are tempting. It’s something that bears repeating, because if this is your first time tackling pizza dough there will likely come a moment or two when you think this is perhaps too technical a process for a home cook such as yourself. This may arise while you’re waiting for the dissolved yeast to exhibit the telltale bubbles signaling it’s ready to be added to the flour and cornmeal comprising the dough (this last ingredient brings a pleasing gritty quality to the crust), or perhaps later in the process, when you’ve added just a touch more water to the mixing bowl and the unfinished combo goes momentarily, frighteningly, all gloppy. To these and other potential concerns I say: relax. This isn’t a soufflé you’re making—it’s a pizza, one of the most forgiving dishes on the planet. Just be sure to use a fresh packet of dry yeast and it will perform as intended. And if that extra water has made a short-term mess of the flour mixture, add a tablespoon (or two) more flour and it will quickly return to form. 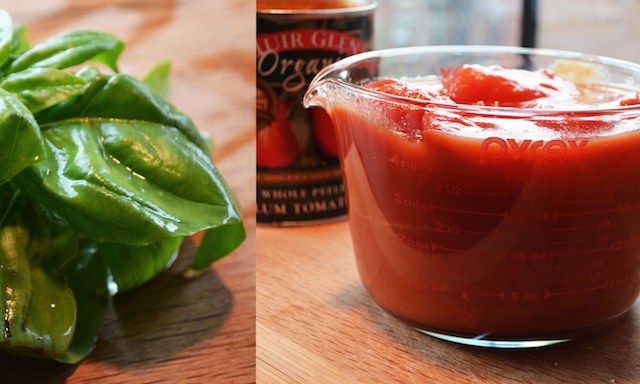 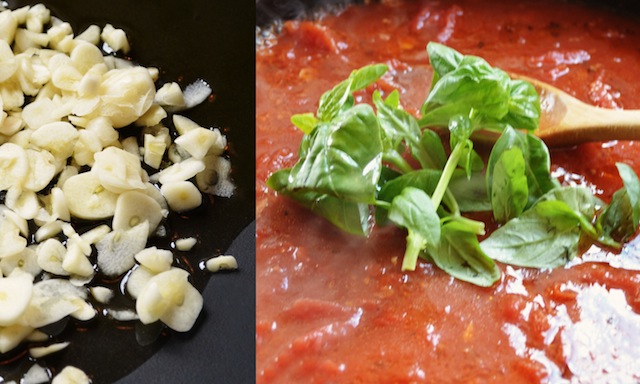 In fact, that instant when the mixing bowl reveals not a shaggy, gloppy mess but something smooth and tight and, well, pizza dough-like is one of the many satisfying moments offered by this recipe. (Another is discovering that after 90 minutes in an oiled and dish-cloth covered bowl, the dough has, in fact, doubled in size as promised—meaning the yeast has worked as intended, and you’ve followed the instructions correctly.) As for that 90-minute time-out required by the dough, this may seem an eternity at first glance, but it proves the ideal opportunity to prepare the various elements that get layered onto the dough, meaning the slicing of the provolone, the mozzarella, and the pepperoni; the grating of the Parmesan or Grana Padano cheese (less nutty and salty than the former, so for me less appealing here); and the making of the all-important marinara sauce.

This last item is also from the Bastianich book mentioned above, and is a standout for both its zesty flavor and the speed with which it can be prepared (about 20 minutes). As such, it’s a great recipe to have in your arsenal and just the thing for those nights when you want to whip up a pasta dinner but don’t have multiple hours to spare. That said I did make one small change to the recipe, by adding ¼ teaspoon of oregano along with the sprig of fresh basil. This, of course, is entirely discretional (I’ve listed the addition as optional below)—I just happen to like oregano and found its presence missing from the final product on my trial run. And one small tip: when crushing the whole tomatoes it’s best to wear an apron. I rarely do, and as a result found myself wiping tomato juice and seeds off both my shirt and my glasses. Also, the marinara recipe below will make about four cups of sauce, which is twice what you’ll need for the pizza; the extra can be set aside for another use (within the next few days), or allowed to cool completely and then frozen for up to several months. 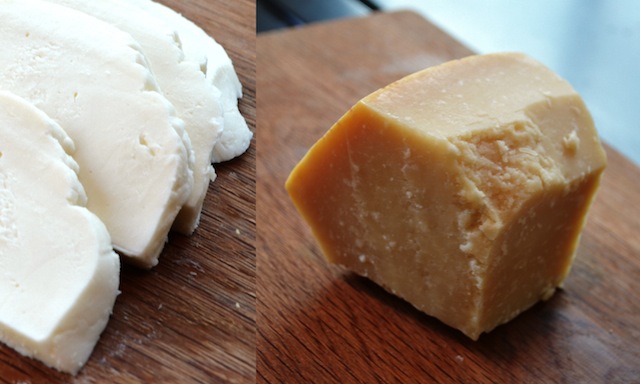 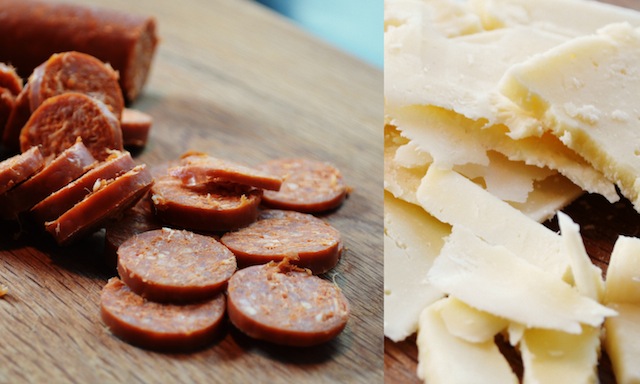 In any case, with all of these elements in place, it’s time for the final assembly. This can be done in either a large oiled baking pan (for more of a Sicilian-style pizza eating experience) or in an oiled 12-inch skillet. For me there’s simply no contest here, since everything just looks better (and therefore tastes better) when produced in a skillet. Either way, once the dough has been pressed into your vehicle of choice, on goes the sliced cheese, followed by the sauce, the pepperoni, and finally the grated Parmesan or Grana Padano. Step back, admire your work, then cover with foil and slip into a 400˚ oven for 45 minutes, before uncovering and baking for a final 20 minutes, or until the crust is just golden brown and the topping goes all bubbly (my oven needed another ten minutes or so to achieve the desired affect).

Perhaps the most challenging part of this entire enterprise is allowing the pizza to rest out of the oven for 10 minutes or so before cutting into it—a brief test of discipline that’s nonetheless critical in allowing the various ingredients to firm up slightly, not to mention protecting you against the very real possibility of scorching the roof of your mouth. Still, it’s a small price to pay for an end result this satisfying: the ultimate Chicago- (or Sicilian-) style specialty delivered direct from your own kitchen, but with more zest, more crunch, more tang, and more cheesy gooeyness than you’re likely to find at your neighborhood pizza joint. And, of course, there’s the satisfaction that comes with knowing you did it all yourself; that tastes plenty good, too. 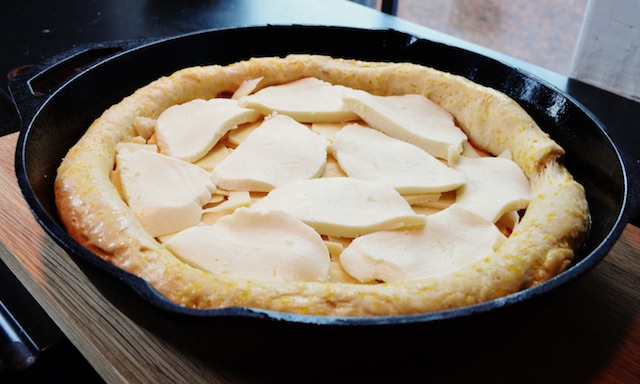 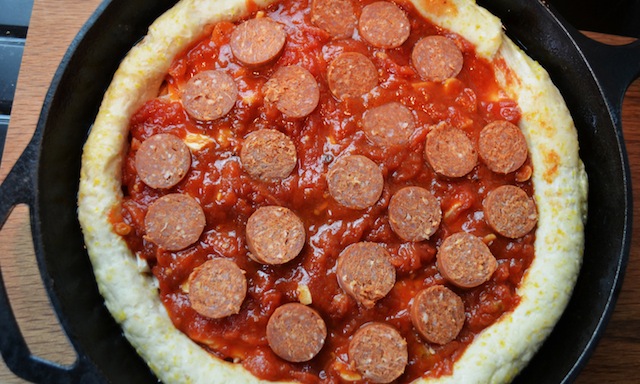 TRG’s modified directions for the sauce:
—Pour the tomatoes and their juice into a big mixing bowl. Using both hands, crush the tomatoes and break them up into small pieces (chunky is fine).
—Pour the oil into a big skillet, scatter in the garlic slices, and set over medium-high heat. Cook for 1½ minutes or so, until the slices are sizzling, then push the garlic aside to clear a dry spot to toast the pepper flakes for another ½ minute. Shake and stir the pan until the garlic slices are light gold and starting to darken. Immediately pour in the crushed tomatoes and stir with the garlic. Rinse out the tomato can and bowl with 1 cup of hot water and pour this into the skillet as well.
—Raise the heat; sprinkle in the salt and oregano and stir. Push the stalk or sprigs of basil into the sauce until completely covered. When the sauce is boiling, cover the pan, reduce the heat slightly, and cook for 10 minutes at an actively bubbling simmer. (The sauce should only be slightly reduced from the original volume.) Remove the poached basil stalk or sprig.

Note: Recipe makes 4 cups of sauce; use remainder for another dish (2 cups is sufficient for a ½ lb of pasta) or let cool and freeze whatever not using.

Directions for the dough and assembly:
—Pour 1 cup plus 3 tbs warm (90 to 110 degrees) water into a bowl, then stir in the sugar and yeast. Let sit until the yeast begins to bubble, about 5 minutes.
—In an electric mixer fitted with the paddle attachment, mix the flour, cornmeal, and salt on low to combine. Pour in the yeast mixture and the olive oil to combine while still mixing. Once the dough comes together, switch to the dough hook, and knead on medium-high speed to make a smooth dough, about 2 to 3 minutes. Add a little more water or flour as needed to make a soft dough.
—Put the dough in an oiled bowl, cover, and let rise until doubled in size, 1¼ to 1½ hours.
—Preheat oven to 400˚. Punch down the dough, and press it into a 14- x 10-inch oiled baking pan or an oiled 12-inch cast-iron skillet, gently pressing the dough up the sides to make a shell. Fill the shell with an even layer of the provolone and mozzarella, then spread the sauce to cover the cheese completely. Top with the pepperoni, and sprinkle with the grated cheese and oregano.
—Cover with foil and bake 45 minutes. Then uncover and bake until the crust is deep golden brown and the topping is bubbly, about 20 minutes more. Let sit 5 to 10 minutes before cutting into wedges and serving. 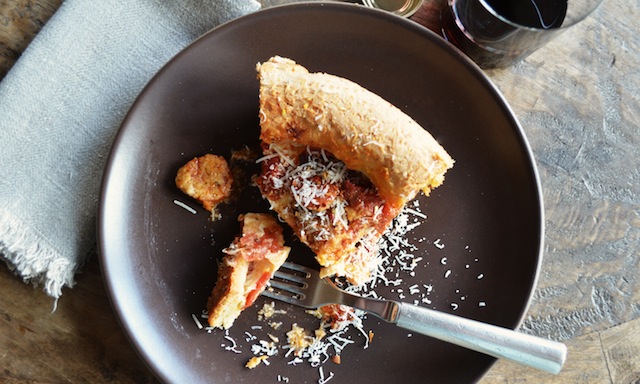