Adapted from the May, 2012 Bon Appétit 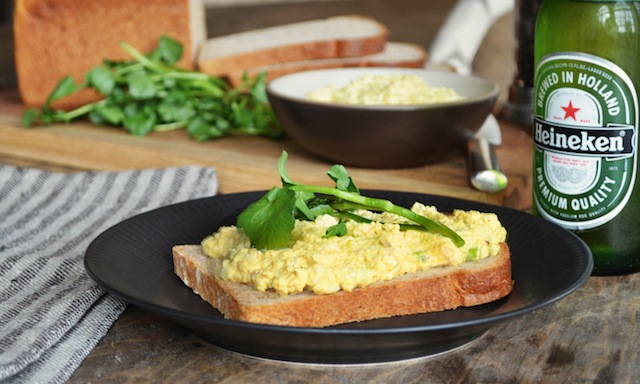 As a kid any number of things could make an appearance in my lunchbox that would immediately cause me to slam it shut, or propel me to the nearest trash can (lest any of my classmates catch sight of the offending item and start their humiliating chorus of Ewwwwwwwww!s). Among these reactive items: liverwurst, Brie and onions on a baguette (my mom was way ahead of the curve on this one—uncomfortably so), Campbell’s Scotch Broth soup (which I still detest), and egg salad. The irony is that many of these items were ones I would have been only too happy to eat in the privacy of my own home, but that surrounded by a roomful of rabid ten-years-olds, none of whom was eating anything more exotic than a bologna and cheese sandwich, were tantamount to social suicide. Back then I’d rather go hungry than take the chance of public, food-related humiliation. (And if I was lucky, I still might be able to negotiate a piece of my neighbor’s Yodel.) 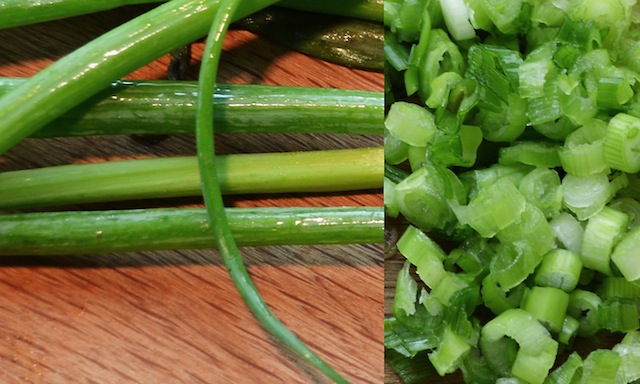 In other words, the egg salad recipe I bring to you here is exactly the sort of thing I would have cursed my mom for thinking I could safely carry into the lions’ den that was elementary school. Because if plain old boring egg salad was the source of countless comments and curled lips, then one featuring such ingredients as shallot and vinegar and curry would have required adult-sized courage (and taste-buds) to even consider eating. Which is to say, it’s precisely the kind of egg salad I’d be only too happy to discover in my lunchbox today, and no doubt one reason I immediately flagged the recipe when I came across it last spring, in the May issue of Bon Appétit.

The recipe was actually part of a special Mother’s Day menu, with the egg salad intended for miniature pita pockets—an update, I suppose, on old-school finger sandwiches. That part didn’t appeal to me so much (when it comes to sandwiches, I generally prefer the two-fisted variety), but I loved the idea of adding curry and cumin to the cooked eggs. And when I discovered that a quantity of cider vinegar was also called for, well, suffice to say it wasn’t long before I was in the kitchen and the requisite eggs had been put on to boil. In truth, I’m a big fan of egg salad—or maybe I should say, the possibility of egg salad. Because the reality is that egg salad rarely lives up to its potential, at least as measured by the outsize satisfaction I derive from deviled eggs. And aside from a slight textural difference, and the fact that the two are consumed in different ways, there really is no good reason that the one should be any less satisfying than the other. 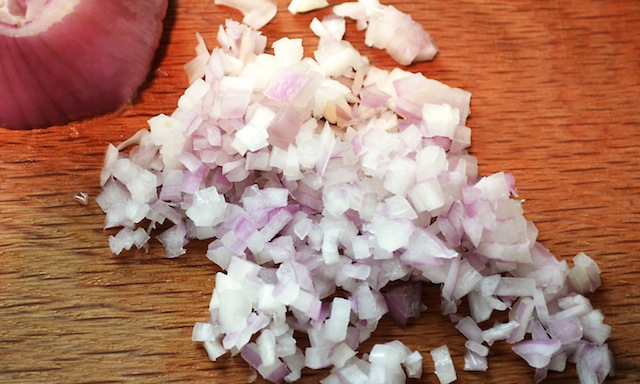 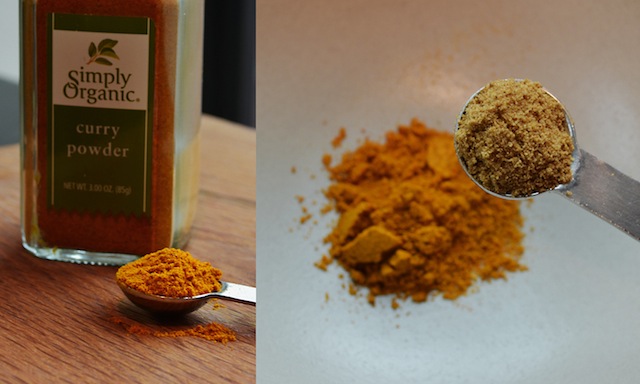 Be that as it may, there’s generally a wide gap between the two experiences, with egg salad’s shortcomings tending to fall within two distinct categories: texture and taste. Now I realize there are those who will disagree with me here, but to my way of thinking, an egg salad is best when it’s creamy—much like the interior of those deviled eggs I mentioned earlier. That’s something I rarely encounter in store- or restaurant-bought egg salad, and, in fact, it’s not necessarily even a quality of the egg salad I bring to you here, as the instructions call for chopping the four hard-boiled eggs listed in the recipe. Chopping, of course, will deliver that chunky texture most people associate with egg salad, but as I like things a little smoother, instead of using a fork to break up the eggs, I used a potato masher—an implement which rendered the bits of egg both smaller and more uniform than the alternate method, and which, with the addition of the ¼ cup of mayonnaise called for, resulted in something delightfully creamy. Of course, chunky is fine, too, but the latter approach definitely gets my vote. 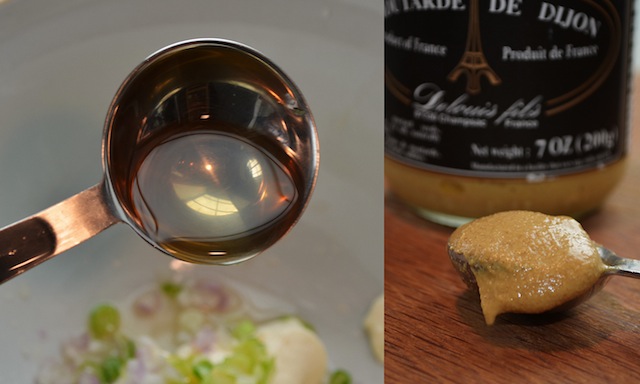 As for taste, unlike the standard egg salad, which calls for little more than mayo, salt, pepper, and maybe a dash of mustard in the mix, this recipe more than rises to the flavor challenge, adding a variety of ingredients that keep things exciting while never drowning out the all-important “eggy-ness” of the finished dish. In other words, exactly the sorts of ingredients one would find in those well-loved deviled eggs. Principal among these additions is a ½ teaspoon of curry powder, which lends the finished product an unexpected hint of the exotic. And if you think the combination of curry and mayonnaise might team up to create something overwhelming, even cloying, the presence of the Dijon mustard and cider vinegar here offers just the acidic note needed to cut through the richness, while at the same time perfectly rounding out the various other flavors. Add a little cumin (that deviled egg standard), as well as a small amount of chopped shallot and scallion for a little more tang and a bit of textural interest, and you have a combo that raises egg salad to a whole other level.

That said, there is one ingredient in the recipe that I don’t endorse, and that is the Granny Smith apple—an item BA suggests peeling and cutting into small pieces before adding to the mixture. The impulse to introduce something sweet here is one I appreciate, just as I do the added crunch the apple brings to the mix, but neither are components I’m really looking for in my egg salad, particularly one that already delivers so effectively on both the taste and texture trajectory. Still, give it a try; what may be overkill for my palate could prove the magic ingredient for yours. Either way, one thing you don’t want to skip is the sprig of watercress the magazine suggests using to garnish the sandwich—a bright, slightly bitter addition that proves the perfect foil to this tantalizing array of flavors. 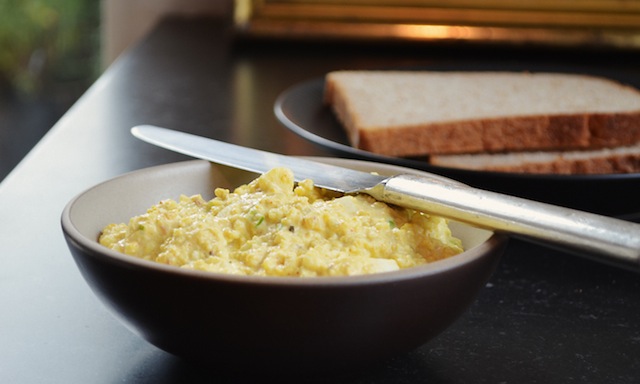 What? You’re not already in the kitchen? Then I should probably also mention that there’s nothing more challenging or time consuming involved in preparing this variety of egg salad than the ho-hum version you’ve likely been eating for most of your life. I love that, just as I love discovering a way to introduce a little excitement into something that’s usually so entirely forgettable. For what it’s worth, I’d choose this new and improved egg salad over a Yodel any day.

TRG note #1: Eggs can be mashed with a strong fork, or, if you like a creamier consistency, try using a potato masher.

TRG note #2: I love apples, but not in my egg salad; I omitted them here.

TRG’s directions for hard-cooking eggs:
—Place eggs in a saucepan and cover with one inch of water. Place pan over medium high heat and bring water to a rapid boil.
—Take the pan off heat, cover, and let sit for 15 minutes.
—Immediately plunge the cooked eggs into ice water to stop the cooking. Peel and eat. 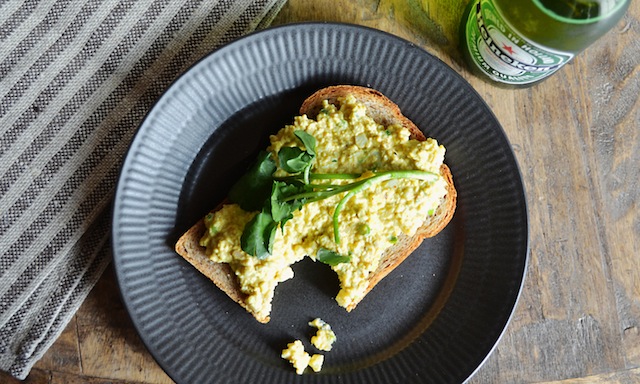