From the May, 2010 Cook’s Illustrated (click here to view the recipe)

It’s taken me a while to get this recipe to you, but it’s one that’s been on my mind since early summer. Remember those weeks in the beginning of June, when you still couldn’t quite believe it was light at 8:30 PM and it seemed like those long, warm days would stretch on forever? Well it was around that time that I was treated to a dinner with a Latin American theme—the highlight of which was a platter (or three) of homemade empanadas, filled with cheese and sweet corn, and passed around while everyone was having a pre-meal mojito. Those empanadas were a revelation. Sure, I’ve eaten my share of empanadas over the years, but none had been anything close to these, perhaps because none had found their way to my mouth so soon—or so directly—after exiting the oven. Or maybe it was simply the result of a talented chef, or an extra special recipe, or exceptional ingredients (the corn, as I recall, was particularly good). And it didn’t hurt that the individual making them (the gifted chef, Sebastian Picasso) was Argentine, or that the recipe is one he’s been making, and perfecting, for years. Suffice to say that I ended the meal with one clear directive: learning the art of empanada-making myself. 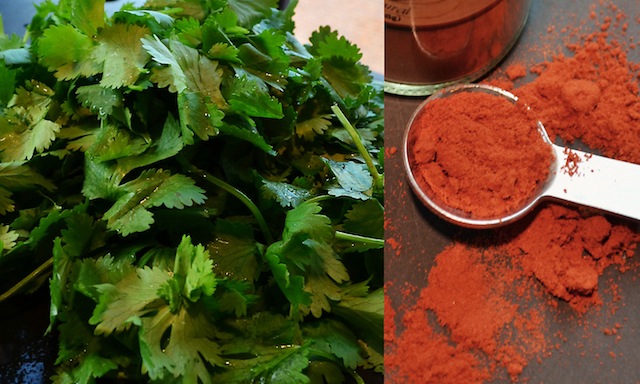 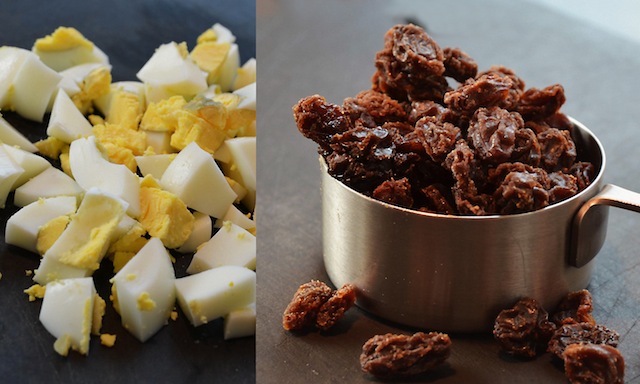 As it turns out, it’s a lot less intimidating than you might imagine. To start, of course, I asked Sebastian if he’d be willing to share his recipe with me—something he agreed to, but that I ultimately ended up not using, for the simple reason that it was written from the perspective of someone who generally follows his instincts versus a recipe. That wasn’t a luxury I could enjoy my first—or even second or third—time at bat, and so I went in search of a recipe that would spell things out for me more precisely. This I found in the Cook’s Illustrated archive—one I vaguely remembered pausing over (but never actually preparing) while flipping through a copy of the magazine several years back. The recipe was for a streamlined version of traditional beef empanadas (versus the slightly less common corn and cheese type Sebastian had prepared), which also seemed a good thing, as I was curious to see what impact a homemade approach would have on this variety as well. (I have, however, included Sebastian’s recipe for the corn and cheese filling below, as these instructions produced less head-scratching for me, not to mention a terrific alternative to the ground beef standard.) 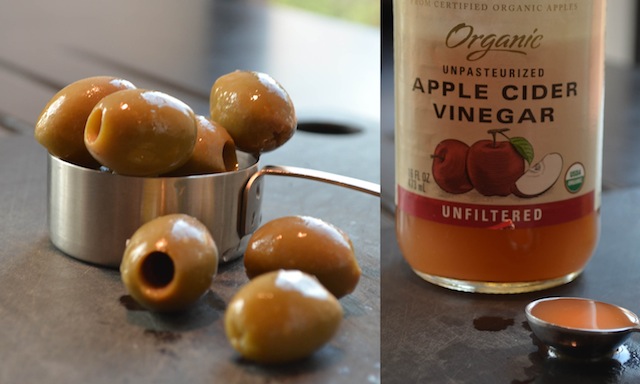 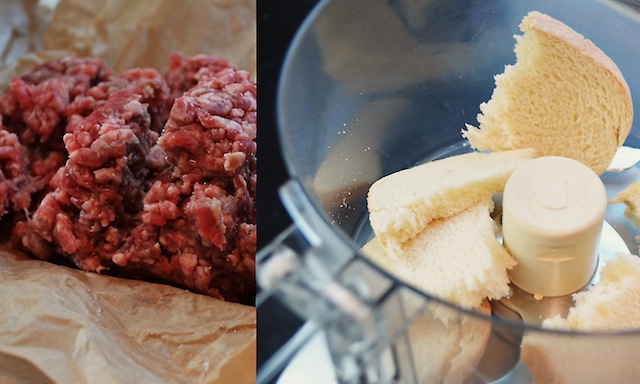 So here’s the first thing you should know about making empanadas: although the process involves three distinct steps (the making of the dough, the making of the filling, and the marriage of these two elements), none are particularly time-consuming and all can be done well in advance of introducing them to the oven. This last detail is an important one as empanadas are ideal for feeding a crowd, but are not the sort of thing you want to be in the midst of preparing as your guests are milling around the kitchen (some concentration is required). In other words, the beef filling can be refrigerated for up to two days (the corn and cheese should probably be called into play the same day); the dough can be made several days in advance; and best of all, the assembled empanadas can be kept in the fridge for up to forty-eight hours before baking. All of which means you can get the heavy lifting out of the way well before your guests arrive, simply sliding the tray of assembled pockets into the oven 40 minutes or so before you want to serve them.

The other thing worth mentioning is that although empanadas are traditionally viewed as a snack or party food in Latin America, for North American tastes—and based on the size of the empanadas produced by this recipe—they work just as well (if not better) as the main event at mealtime. This is true whether you plan to pair the stuffed pockets with a salad and to turn it into a knife and fork event, or to consume them direct from hand to mouth—something for which their self-contained quality makes them ideally suited. Either way, you can pretty much be assured of an appreciative audience: no food seems to put a smile on peoples’ faces faster or more consistently than an empanada. 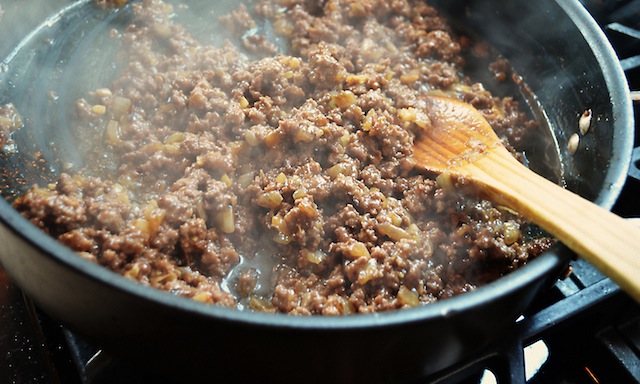 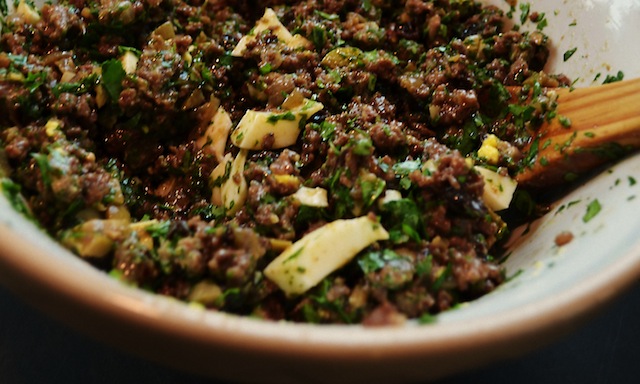 That’s especially true with this recipe for several reasons. First and foremost there’s the beef filling, which is a mouth-watering mix of ground beef, cooked alongside a quantity of sautéed onions, all of which is flavored with garlic and a variety of spices (cumin, cayenne pepper, ground cloves), and then simmered in the company of a ½ cup of chicken broth to increase the flavor quotient. And that’s just the beginning: once this mixture has had a chance to cool (about 10 minutes or so), you can then introduce the really good stuff—the cilantro, the chopped eggs, raisins, and olives, and the 4 teaspoons of cider vinegar, which along with those chopped olives lends the whole mixture a pleasing bite that also presents the perfect foil to the filling’s meaty richness.

And then there’s the dough, which is both foolproof (a result of CI’s meticulous tinkering and instructions) and pleasingly rustic—this thanks to the addition of the masa harina, a nutty, ground cornmeal typically used to make tortillas. What’s more, the addition of a ½ cup of cold vodka or tequila, sprinkled over the gloppy mixture resulting from the combination of the dry ingredients (the all-purpose and corn flours, the sugar, the salt) and the butter, assures the finished product a light, flakey quality (and no, the alcohol cannot be tasted). 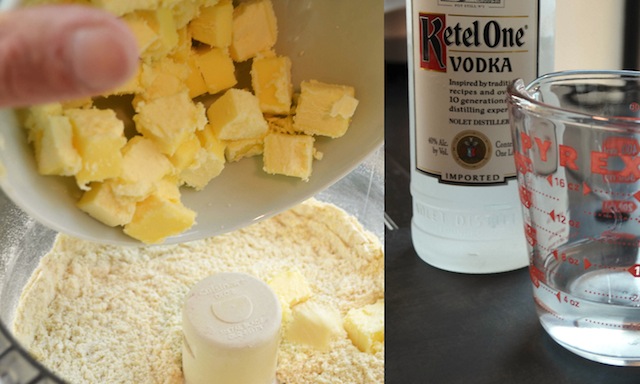 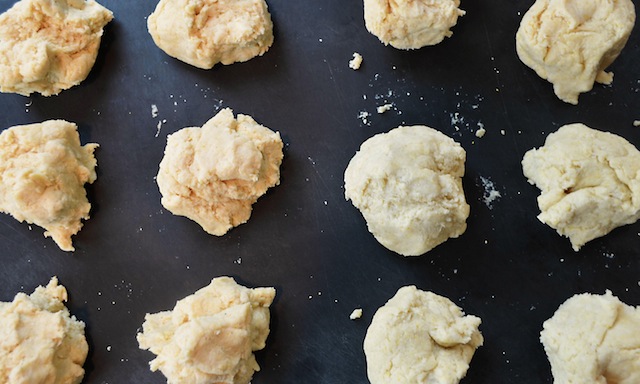 Two quick tips, however, are in order: the first involves the instruction to roll out the dough into twelve 6-inch circles. After several tries, none of which produced anything remotely resembling a perfect circle, I discovered that by gently lifting the dough from my work surface and turning it clockwise a few degrees before once again attacking with my rolling pin, I was more likely to end up with the desired shape than if I simply left the dough in one spot and came at it from different directions. Also, while the recipe’s instructions for rotating the two empanada-filled baking sheets during cooking is designed to ensure even cooking, I still found that the pan located closest to the heat source during the final cooking phase browned faster than the one placed lower in the oven. So keep a close eye on things, or risk a tray of blackened empanadas. And one final note: as good as these empanadas are, I found a touch of added heat made them that much better—a void filled easily enough with just a few splashes of hot sauce. In fact, Alfredo tells me this is the way he grew up eating them in Miami, and if it’s good enough for the Cuban community in South Florida, it’s good enough for me.

Note #1: Masa harina—the ground and dehydrated cornmeal used to make Mexican tortillas and tamales—can be found in the international aisle with other Latin foods, or in the baking aisle with flour. If you cannot locate, replace with additional all-purpose flour (for a total of 4 cups).

Note #2: The alcohol in the dough is essential to the texture of the crust and imparts no flavor—do not substitute for it or omit. 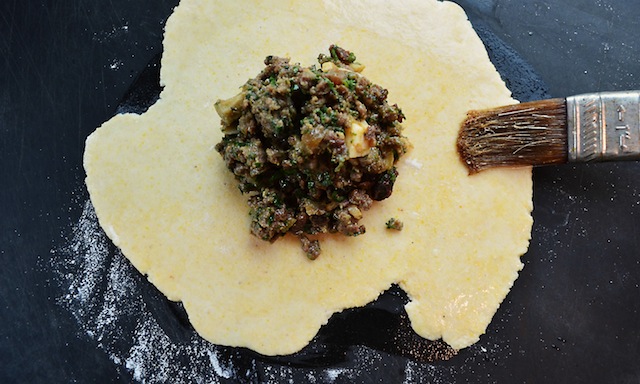 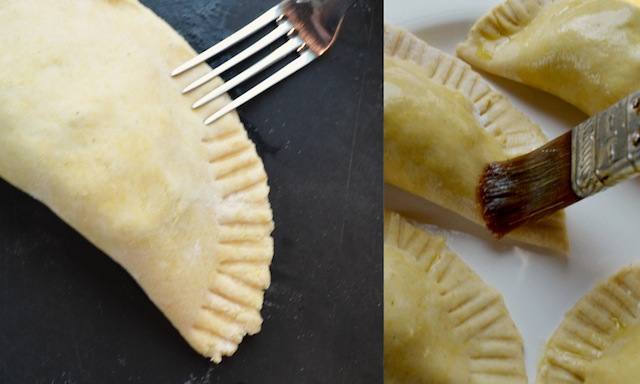 Directions for the beef filling:
—Process bread and 2 tablespoons chicken broth in food processor until paste forms, about 5 seconds, scraping down sides of bowl as necessary. Add beef, ¾ teaspoon salt, and ½ teaspoon pepper and pulse until mixture is well-combined, six to eight 1-second pulses.
—Heat oil in a 12-inch nonstick skillet over medium-high heat until shimmering. Add onions and cook, stirring frequently, until beginning to brown, about 5 minutes. Stir in garlic, cumin, cayenne, and cloves; cook until fragrant, about 1 minute. Add beef mixture and cook, breaking meat into 1-inch pieces with wooden spoon, until browned, about 7 minutes. Add remaining ½ cup chicken broth and simmer until mixture is moist but not wet, 3 to 5 minutes.
—Transfer mixture to bowl and cool 10 minutes. Stir in cilantro, eggs, raisins, olives, and vinegar. Season with salt and pepper to taste and refrigerate until cool, about 1 hour. (Filling can be refrigerated for up to 2 days.)

Sebastian Picasso’s directions for corn and cheese filling:
—Saute onions over low heat with 2 tablespoons of butter until softened but still firm. Add the corn and cook briefly, then add the garlic and stir well. Set aside and let cool.
—Once the corn mixture is cool, add the cheese and mix well. Season with salt and more butter if needed. Add the basil, stir well, and let rest for one hour. NOTE: Make sure the filling is cool before placing in the dough rounds, as a warm mixture will cause the dough to fall apart.

Directions for the dough:
—Process 1 cup flour, masa harina, sugar, and salt in food processor until combined, about two 1-second pulses. Add butter and process until homogeneous and dough resembles wet sand, about 10 seconds. Add remaining 2 cups flour and pulse until mixture is evenly distributed around bowl, 4 to 6 quick pulses. Empty mixture into large bowl.
—Sprinkle vodka or tequila and water over mixture. Using hands, mix dough until it forms a tacky mass that sticks together. Divide dough in half, then divide each half into 6 equal pieces. Transfer dough pieces to plate, cover with plastic wrap, and refrigerate until firm, about 45 minutes or up to 2 days.

Directions for assembly:
—Adjust oven rack to upper- and lower-middle positions, place 1 baking sheet on each rack, and heat oven to 425˚.
—While baking sheets are preheating, remove dough from refrigerator. Roll each dough piece out on lightly floured work surface into a 6-inch circle about 1/8 inch thick, covering each dough round with plastic wrap while rolling remaining dough.
—Place about 1/3 cup filling (either the beef mixture or the corn and cheese) in center of each dough round. Brush edges of dough with water and fold dough over filling. Trim any ragged edges. Press edges to seal. Crimp edges using fork. (The formed empanadas can be covered tightly with plastic wrap and refrigerated for up to 2 days prior to cooking.)

Directions for baking:
—Drizzle 2 tablespoons oil over surface of each baking sheet, then return to oven for 2 minutes. Brush empanadas with remaining tablespoon oil.
—Carefully place 6 empanadas on each baking sheet and cook until well-browned and crisp, 25 to 30 minutes, rotating baking sheets front to back and top to bottom halfway through baking. Cool empanadas on wire rack 10 minutes and serve. 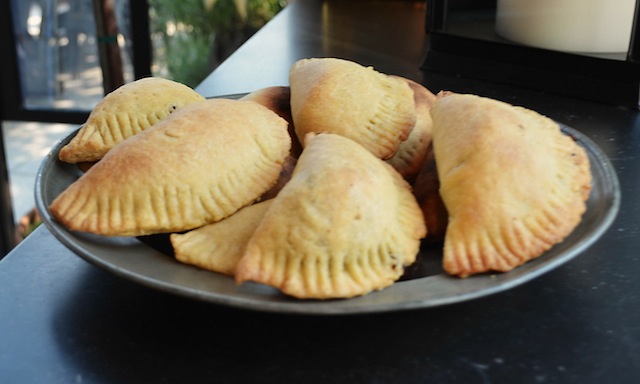