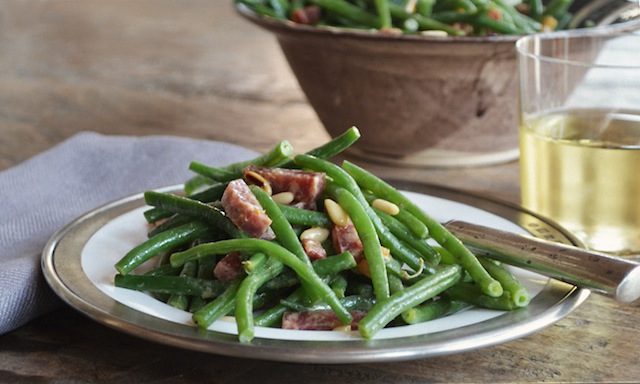 A few weeks ago my dear friend Scott joined me for a weekend in East Hampton. Actually, it would probably be more accurate to say that I joined him, since even though he was nominally my houseguest, in my handicapped condition (still crutched and booted, I’m afraid), and with Alfredo traveling for work, I needed Scott to help me with a variety of tasks, not least of which was the 100 or so mile drive from the city to the east end of Long Island. And then there was all the fetching, carrying, food shopping, and whatnot I couldn’t handle on my own. Honestly, before my accident I had no idea how challenging navigating the world with a disability was, so if nothing else the experience has given me a new perspective on things! And it’s forced me to rely on others in a way that I’ve tended to avoid—or at least used to. (It’s nothing to brag about, but in the past month I’ve actually gotten pretty good at directing my loved ones to bring me this or take care of that. In fact, my new favorite game—though probably no one else’s—is to sit in a chair and yell, “Nurse!” until I get some action, which is usually just a roll of the eyes or a thwack to the back of my head.) All of which is a long-winded way of saying that Scott worked his ass off while I sat around and drank iced coffee. 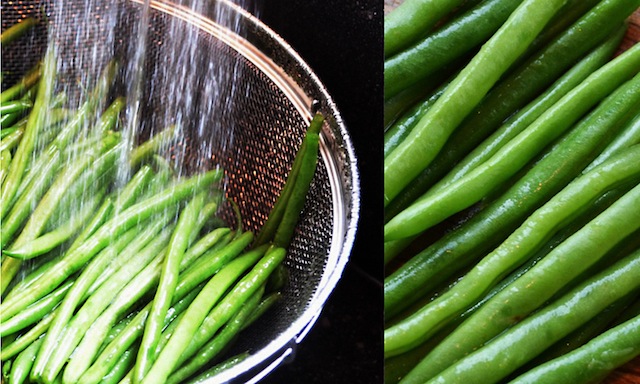 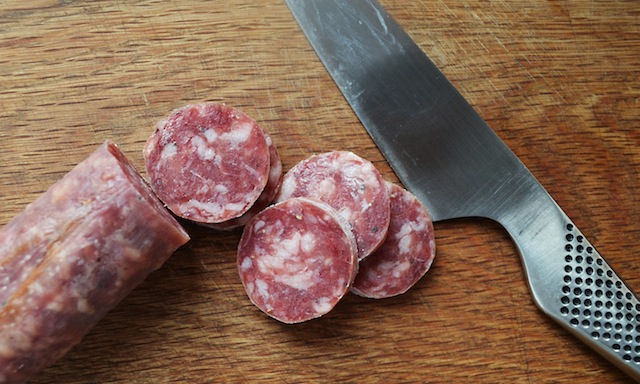 Among the myriad tasks he took on during our weekend was to fix a spectacular Saturday lunch, featuring a shrimp salad with celery and capers, a cold beet salad with goat cheese, and a wonderful haricot vert salad with salami, bacon, and pine nuts. This last item was one I had to share with you, both because it was so good, but also because it managed to transform something I rarely get excited about (green beans) into something I couldn’t get enough of. 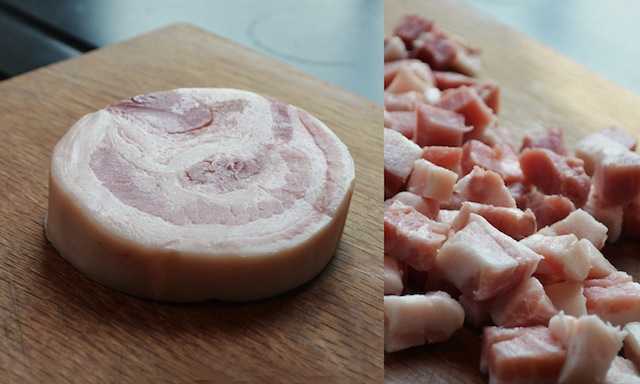 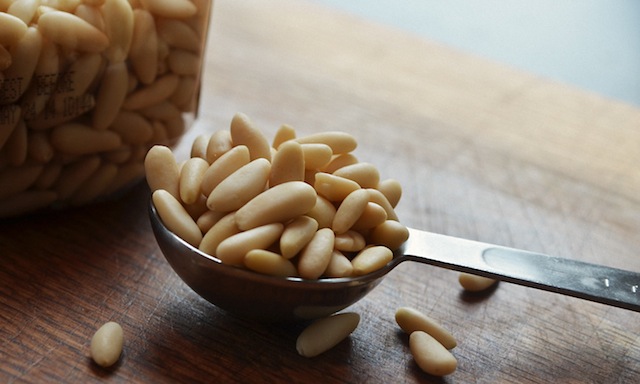 First, though, a few words about haricots verts, which as some (many?) of you may know is not the same thing as standard green beans. If this subject is already one you covered in second grade, then please move on to the next paragraph. But as the difference is one I’ve never been completely clear about myself, I thought I’d devote a few sentences to the subject—as much for my own sake as for any of you who might be equally vague around the issue. As the name suggests haricots verts is a French variety of green bean (also known simply as French green beans, or filet beans). Of course, that doesn’t mean the bean is grown exclusively in France, but rather that it originated there. More importantly for our purposes, however, is the fact that it’s thinner, more delicately flavored, and cooks faster than the green bean standard (aka string beans, or snap beans), all qualities that are key to the pleasures of this dish. 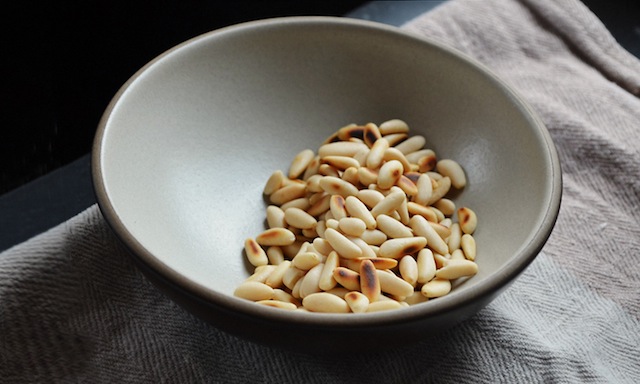 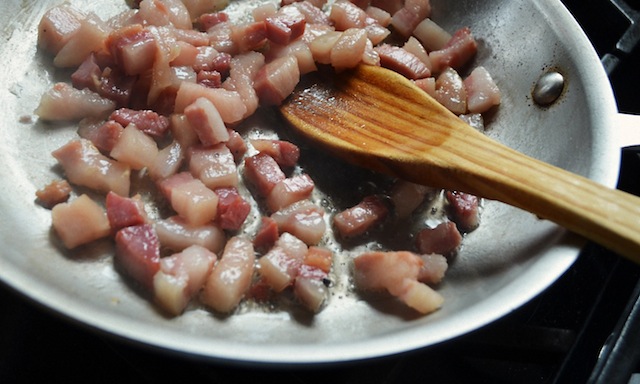 Those first two qualities are ones that prove the perfect foil for the various other ingredients called into play here, since the mild taste and refined proportions of the bean make them the perfect match for the salt and crunch of the bacon, salami, and toasted pine nuts combination, not to mention the mustard vinaigrette that holds the entire mixture together. In fact, so appealing was the salt and crunch of the bacon component that I found myself wanting to amplify it somehow, a minor change I was able to achieve when I made the dish again a few days later (yes, it’s that good) by swapping out the crumbled bacon for a quantity of diced and fried pancetta. Both options are excellent, though I particularly like the chewy texture and more complex flavor of the pancetta in combination with the other ingredients here. Of course, if you prefer the taste of bacon over pancetta, the thick cut variety is another way to go—just dice and fry as you would the cured pork belly to achieve something akin to those little pork nuggets you’d find in a frisée aux lardons salad. As Scott would say, “Yummy, yummy, yummy!” 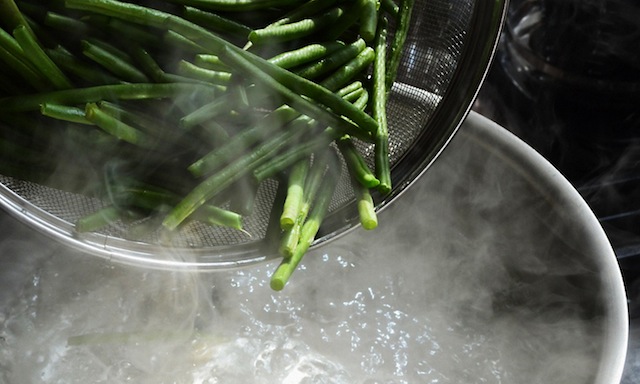 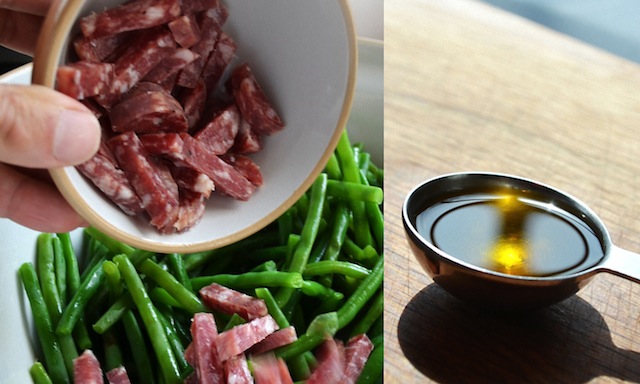 In other words, this is a great salad to dial up or down, according to your preferences, adding to (or subtracting from) the various ingredients to achieve the exact degree of zest or crunch or earthiness you’re after. And it comes together quickly. All of which makes this my candidate for the best salad of the summer. Enjoy! 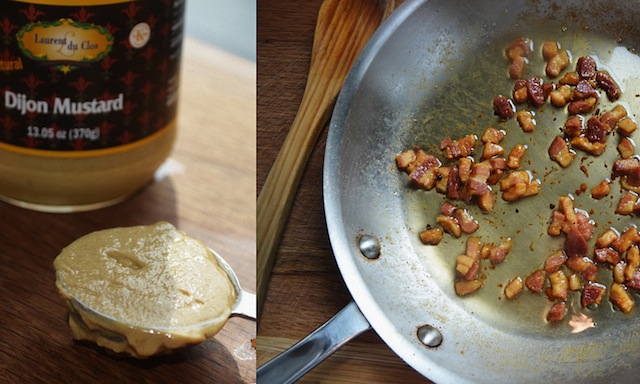 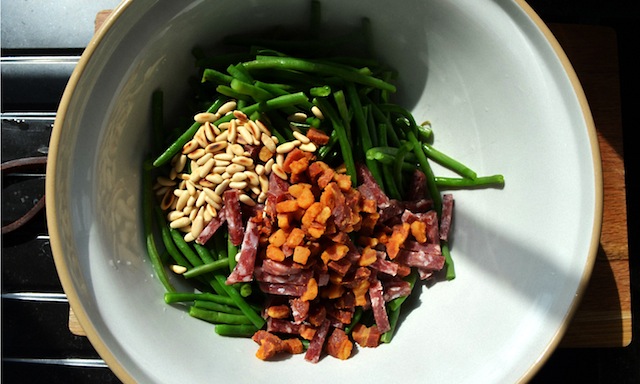 Directions:
—Add the green beans to salted boiling water. Cook about 4 minutes, or until tender, then drain and run under cold water. Set aside.
—Pour the vinegar into a small bowl, add a dash of salt and a few grinds of pepper, and stir with a fork to emulsify. Add the olive and stir, then add the mustard and stir. Adjust seasoning as needed.
—Place the green beans in a large bowl, then add the sliced salami, the crumbled bacon (or diced pancetta), the pine nuts, and the vinaigrette. Toss well to incorporate.
—Adjust seasoning with sea salt and freshly ground black pepper. 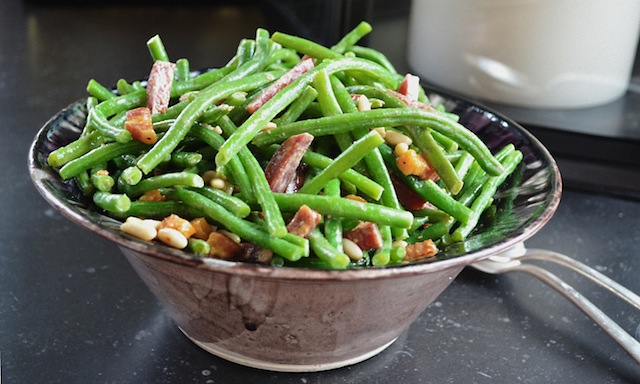