From the Dec., 2003 Fine Cooking (click here to view the recipe) 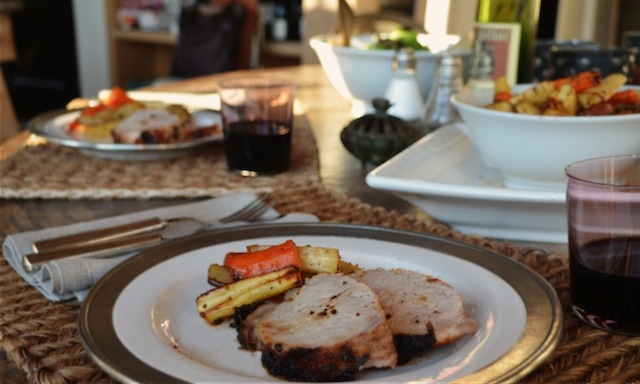 For the last several years my preferred means of transportation around the New York City has been a scooter. The benefits (easy parking, rarely having to sit in traffic, speed!) are such, that even when the weather is wet and miserable and I know that riding will be no fun, I’m inclined to say the hell with it and brave whatever discomfort awaits. I mention this because it was during one such outing recently that the memory of the pork roast I bring to you here came to mind. Now maybe this seems like a strange thing to be thinking of while dodging the taxis and potholes on lower Fifth Ave., but it was the end of the workday, a cold rain was falling, and it was getting close to dinnertime. In other words, I was wet and hungry, and what better way to distract myself than to imagine the meal I’d like to be eating in a few hours? Unfortunately it wasn’t in the cards on that particular night (we ended up with Indian take-out, I think), but the thought of that roast had insinuated itself, and a few days later it was on the table.

It’s a roast I’ve made many times over the years — and each time been delighted with the results. There are several reasons for this. For starters there’s virtually no effort involved, unless you count a very minimal amount of peeling and chopping effortful. In fact, it’s so easy that each time I return to this recipe I’m surprised by how little it asks of you — even after all this time, it still seems like I must be missing a few paragraphs of instructions. Of course, none of that would mean anything if it wasn’t also immensely satisfying, producing the sort of big flavors you hope for each time you slide a roast in the oven. If only all successful cooking endeavors were this easy! 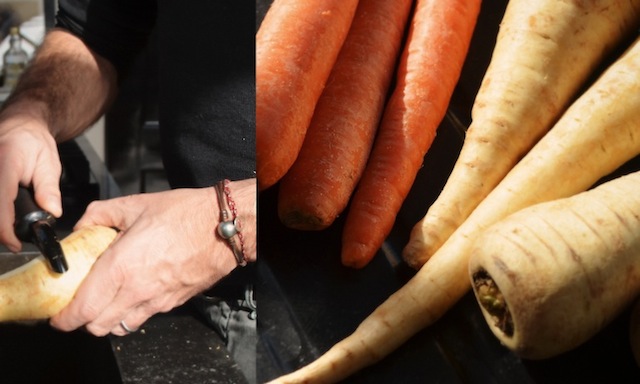 Part of that ease is due to the fact that this pork roast cooks alongside what for me has become its ideal accompaniment — big pieces of carrot and parsnip, as well as wedges of Bosc pear. It’s the ideal mix of textures, colors, and flavors, with the sweetness of the pear presenting the perfect foil to the mellowness of the pork, and the carrot and parsnip offering just the right amount of crunch (and, in the case of the former, a tantalizing splash of color). What’s more, it eliminates the need for cooking a side of veggies to go with the meat, since the recipe offers an all-in-one solution. Once the meat and fruit/vegetable accompaniment are slipped into the oven, you’re work is essentially done.

This one dish approach also means the pear and vegetables benefit from what may well be the recipe’s biggest selling point — the glaze that’s slathered across the roast’s top and sides just before it enters the oven. In keeping with the simple-is-better theme of this posting, it’s nothing more than a mix of honey, Dijon or grainy mustard (I like the texture offered by the latter), and a few tablespoons of chopped sage. But don’t let the every-day quality of these ingredients fool you. Individually they may not seem all that exciting, but in combination they imbue the roast with something truly special. For one thing the mustard/honey combination offers a pleasing sweet and sour effect that, when cooked makes the roast and its wreath of fruit and vegetables compulsively eatable. But it also produces an enticing crust that offers a nice bit of crackle when you cut into it (not to mention a lure for wayward fingers), while also sealing in the roast’s valuable juices. 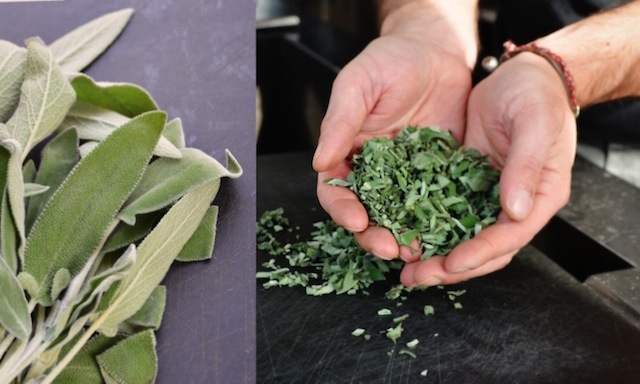 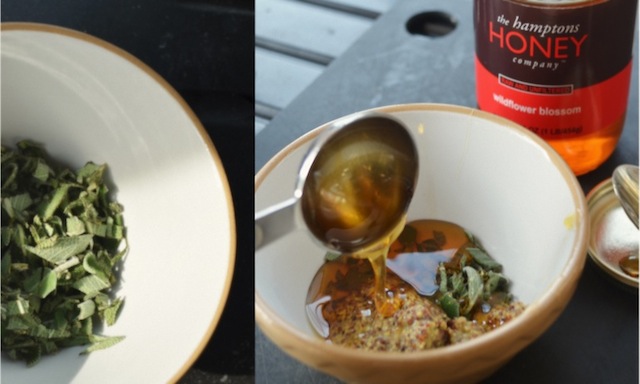 This last point is a critical one, and a benefit you don’t want to jeopardize by over-cooking. To that end it’s a good idea to check the roast often after the 30-minute mark, and to use a reliable thermometer when doing so. Cooking times will vary widely depending on the thickness of the roast (the one shown here took about forty-five minutes), so the only way you can really be certain that you’ve hit the mark is by measuring the temperature (145 degrees F is the target). A digital thermometer is way more reliable than the standard variety, and the key to ensuring that each slice produces a river of clear juices.

One final note: although the recipe indicates it’s meant to feed between four and six people, in my experience three to four is a more realistic number. This may, of course, be a result of the overeating that typically goes on around my table (with the place of honor reserved for yours truly) but I also like to think it has something to do with the appeal of this particular dish and its winning mix of flavors. It’s that good. 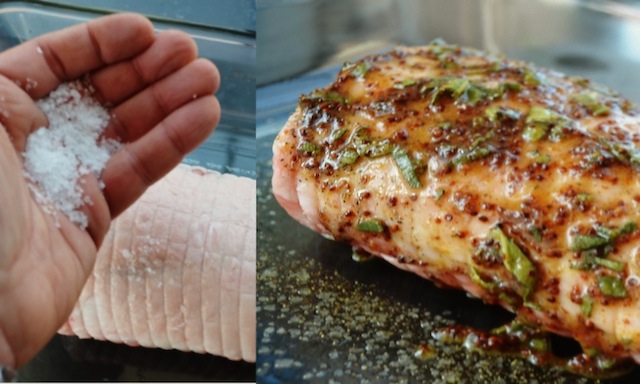 Directions:
—Heat the oven to 400 degrees. Lightly oil the bottom of a medium roasting pan or 15” x 10” Pyrex dish and set the pork in the center. Season the pork with salt and pepper.
—In a small bowl, mix the mustard, honey, and half of the sage; spread on the top and sides of the pork.
—If the carrots and parsnips are thick (about 1” or larger around), cut them in half or quarter lengthwise so that they’re all roughly the same thickness (about a ½” thick at their thickest part).
—Toss the vegetables and pear wedges with the 1½ tbs olive oil and the remaining sage, season with salt and several grinds of pepper, and arrange around the pork. Pour ½ cup of water into the pan and roast in the center of the oven until and instant-read thermometer inserted in the center of the roast registers 145 degrees, 30 to 40 minutes. (The cooking time will vary widely depending on the thickness of the roast; start checking early, and check frequently once the temperature reaches 130 degrees.) If the vegetables and pears aren’t fully tender by the time the pork is done, return them to the oven until tender, another 5 to 10 minutes more.
—Transfer the pork to a carving board. Let rest for 5 minutes before slicing. Serve with the vegetables, pears, and pan juices. 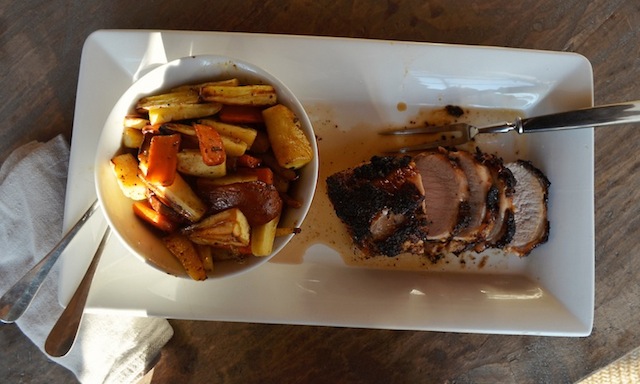 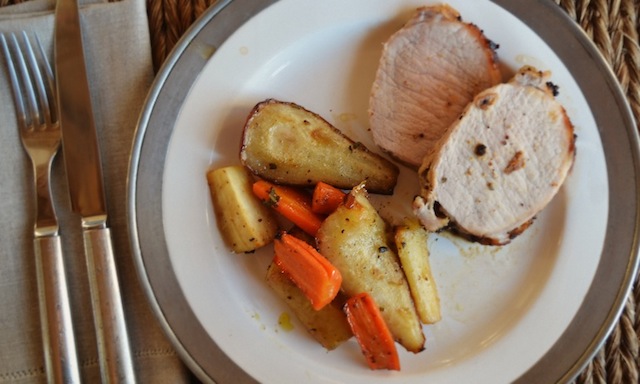