From Elle Decor (click here to view the recipe) 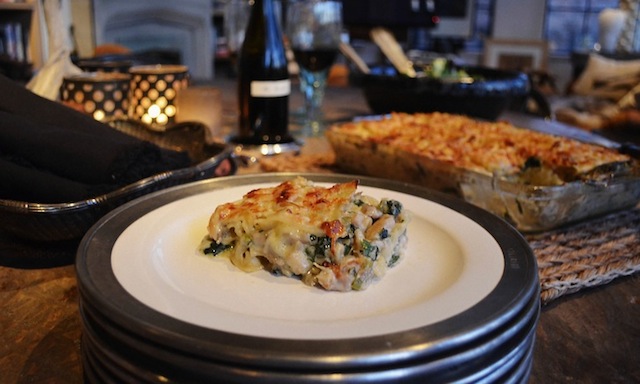 Maybe it comes from growing up in a house where Sunday football was the sort of social event that had family, friends, even a few of my stepfather’s graduate students, gathered around the television, feasting on sandwiches and anything else my mom brought out of the kitchen, but today I like nothing more than inviting a group over for food and TV. Of course, it helps if there’s actually something on TV worth watching — ideally the sort of program that doesn’t require a lot of concentration or preclude the possibility of conversation. This coming Sunday’s Academy Awards offers just such an occasion, in part because it’s a show that doesn’t just invite commentary from those splayed across your living room sofa but is generally made better because of it. (Who needs Joan Rivers when you have your own crew of self-appointed fashion critics picking apart those Red Carpet looks?)

The challenge, of course, is what to feed a crowd that will mostly be balancing plates on their knees. A fun/silly event like the Oscars calls for something in a similar vein, but one that will have you out of the kitchen and claiming your spot on the sofa in time for your guests’ arrival. In past years my solution to this puzzle has come in the form of one-dish dinners like chicken potpie or a souped-up mac-and-cheese, though the chicken and mushroom lasagna I bring to you here is one I’d also add to the list. It’s a recipe I pulled from the Jan./Feb. 2012 issue of Elle Décor, and while there’s definitely some effort involved (preparation and assembly takes at minimum a few hours), most of the heavy-lifting can be done up to a day in advance. And the payoff is huge.

I fear I may already have lost you with that “heavy-lifting” bit but let me repeat the previous sentence: the payoff is huge. In other words, that heavy lifting is well worth the effort. Unlike the dish you typically think of when you hear the word lasagna this one involves no tomato, ricotta, or mozzarella. Now I personally hold all three of these ingredients in high esteem, but the fact that this version substitutes them for things like cream, chicken, and wild mushrooms means that the end result is something both richer and earthier than the standard. So instead of the acidic tang of a marinara sauce cutting through the richness of the cheese, you have a cream sauce providing heft and depth to the proceedings. Factor in the presence of the sautéed chicken, mushrooms, spinach, and some white wine, and you’re left with a heartier, Gallic version of the Italian classic — think of it as lasagna’s brother from another mother. 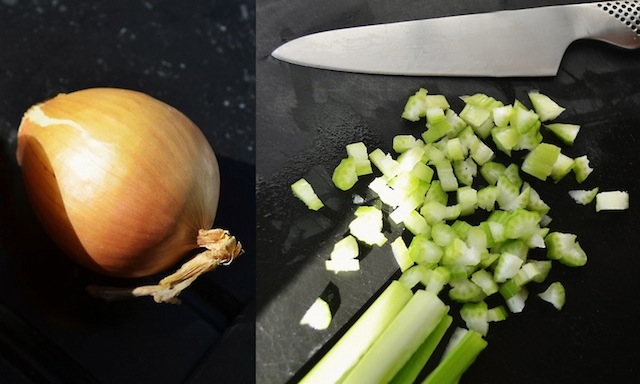 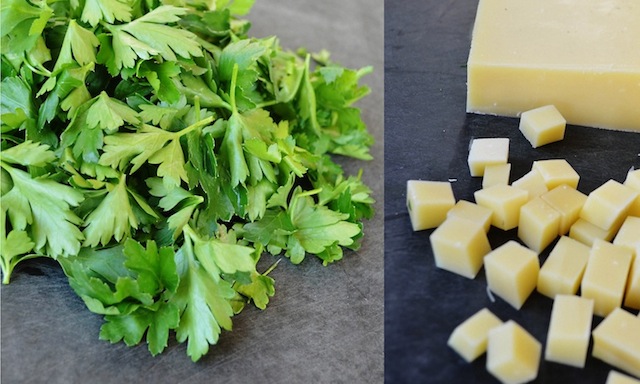 With all this, however, comes a number of added steps — from chopping (the onions, celery, chicken, mushrooms, cheese), to sautéing (see previous, minus the cheese, plus the spinach), to grating, to stirring… lots of stirring, in fact, and simmering. The simmering comes into play late in the game, during a final prep stage that calls for making a kind of bechemal sauce in a pot already containing the sautéed chicken, previously coated with flour and having absorbed a good deal of white wine. None of this is particularly taxing, but it does require some patience and, in my experience, tends to take longer than the instructions estimate. But again, it’s worth it. Just wear comfortable shoes.

Not convinced? Well, I haven’t even mentioned the cheese, of which there is plenty to provide the textural component that’s so important with lasagna — part runny/gooey, part crispy/crackly. The latter comes from the addition of some grated parmesan cheese, added in the final moments before the whole assemblage is slipped into the oven (or the fridge, if the cooking stage has been put off until the following day). The gooey quality, on the other hand, arrives thanks to the presence of a substantial amount of diced fontina cheese, which is sprinkled across each of the three layers and, once cooked, melts down to an oozing perfection. That said, though the texture couldn’t have been more enticing, I did find myself craving a bit more of a cheesy bite — an added sharpness I ultimately found by swapping the fontina for comté (though gruyere would work just as well). But that’s me; you may prefer something milder, in which case the fontina is the perfect choice.

I would counsel, however, against using chanterelles, one of the three varieties of wild mushrooms suggested by the recipe. Once sautéed and baked alongside the other ingredients I found they became unpleasantly soft and slippery — a sensation that in the company of sautéed chicken can be a little off-putting. Far more successful from my perspective were hen of the woods (which are also suggested by the recipe), though I ended up supplementing them with standard issue Baby Bellas as the market didn’t have enough of the former to satisfy the recipe. Despite the addition of this domestic variety, the mushroom combo still had plenty of earthy flavor and held up far better than the chanterelles, making them a far more appealing partner to the chicken. 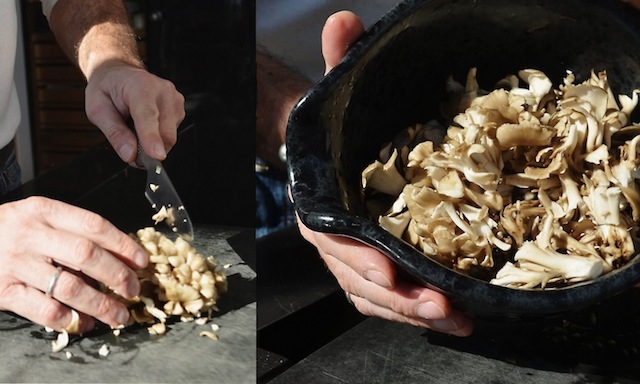 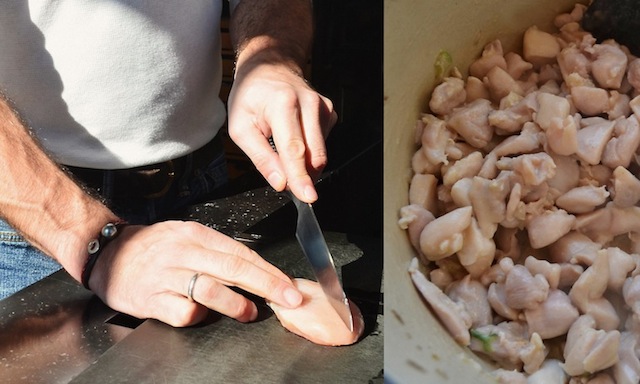 One other minor tweak involves the cooking time. After baking for 30 minutes, covered, at 350 degrees, the recipe instructs you to remove the foil and brown the parmesan topping in a 400 degree oven for ten to fifteen minutes more. Maybe it’s a quirk of my oven, but even after thirty minutes at the suggested temperature, the color of the topping obstinately refused to budge into golden brown territory. So instead, I’ve taken to turning the oven to the broiler setting and doing a final blast at that temperature for the last ten minutes. Whatever you do, however, be sure to keep an eye on things as the last thing you want after all that chopping, sautéing, whisking, and simmering is to see your efforts turn the color of your broiler pan. 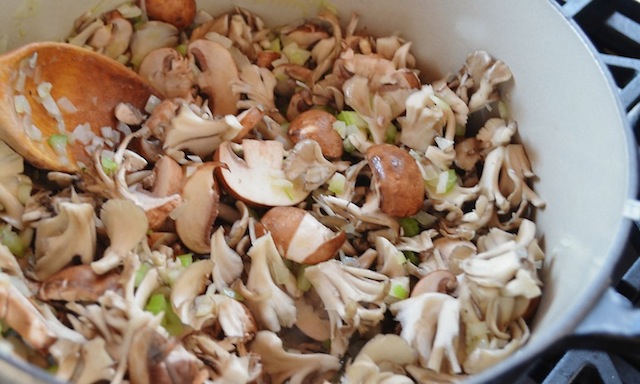 Directions:
—In a large Dutch oven or stockpot, heat 3 tablespoons of the olive oil over medium-low heat. Add the onion and celery with a sprinkle of salt and pepper, and cook, stirring, until translucent, about 3 minutes. Increase heat to medium-high, and add mushrooms. Cook, stirring, for 3 minutes, then add the spinach with a sprinkle of salt and pepper. Cook until spinach is wilted and mushrooms are tender. Remove the vegetables from the pot and reserve.
—Add the butter to the same pot, and adjust the heat to medium. Season the chicken on all sides with salt and pepper, and add to the melted butter. Cook, stirring, until the chicken is almost cooked through but not browned, about 6 minutes. Add the wine and simmer until almost completely reduced.
—Sprinkle the flour over the chicken, and cook, stirring, for about 5 minutes, allowing the flour to coat the chicken and absorb the liquid. Gradually stir in the cream and milk, scraping the pot to release any cooked flour from the bottom and sides (if necessary, stir with a whisk to break up any lumps). Simmer for 5 minutes, stirring constantly, allowing the liquid to thicken.
—With a spoon or ladle, reserve 1 cup of liquid. Remove the pot from the heat, and add the cooked vegetables and mushrooms. Add the chopped parsley. Season with nutmeg, salt, and pepper to taste.
—Bring a large pot of salted water to a boil and cook the noodles for about 8 minutes; they should be not quite cooked through (al dente). Strain the noodles in a colander, and rinse in cold water. Drain, then toss noodles with 2 tablespoons of olive oil to prevent sticking.
—Center a rack in the oven and preheat it to 350 degrees. Butter a 9” x 13” baking pan. Place a layer of 4 noodles on the bottom, overlapping them slightly. Top with one third of the chicken mixture, then one third of the diced fontina. Repeat layering twice more, finishing with a layer of noodles. Spread the reserved sauce on the noodles and then sprinkle with Parmesan. (At this stage, the lasagna can be refrigerated overnight. Cover tightly with aluminum foil or plastic wrap.)
—Cover with aluminum foil or a lid and bake for 30 minutes. Increase heat to 400 degrees, remove the foil, and continue to bake until golden brown, 10 to 15 minutes more. 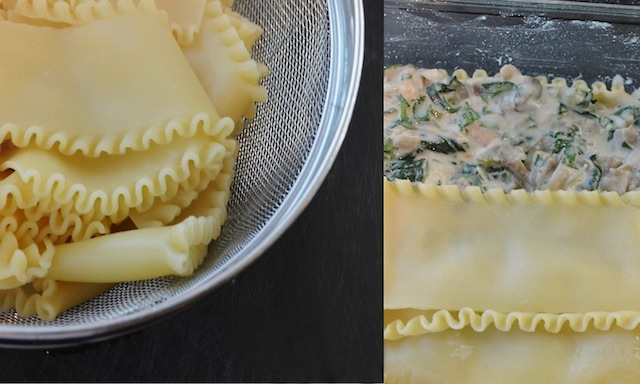 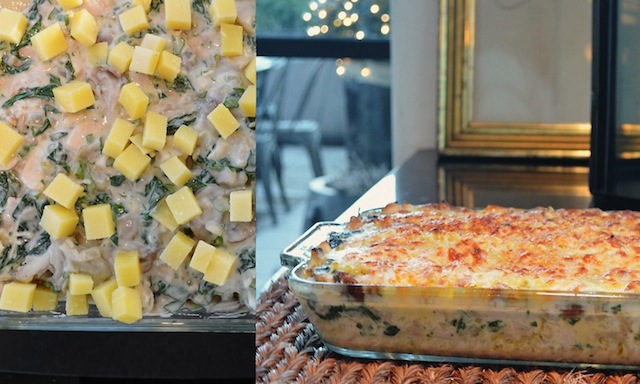