From the Oct., 2007 issue of Fine Cooking (click here to view the recipe) 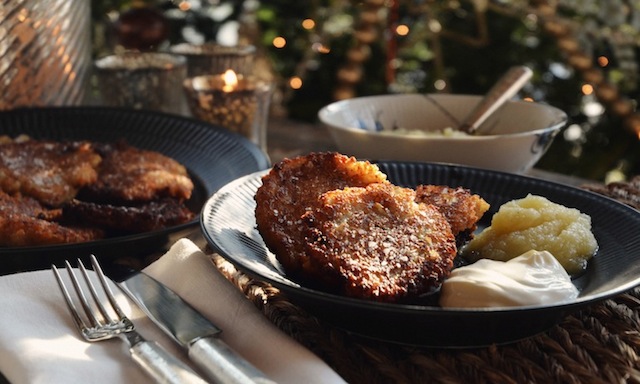 Many years ago I wrote a piece for a women’s magazine about growing up with two mothers — my biological mom and my step-mom. The two households were vastly different and shuttling between them presented some challenges at times, but those differences also offered a lot of benefits. That’s something I’m particularly aware of during the holidays, when I feel the powerful yank of nostalgia around both Christmas and many of the big Jewish holidays — they all hold some meaning for me. That’s because my mom is Jewish while my step-mom is Protestant (of the east coast WASP variety). Of course, it’s not quite as simple as all that since neither woman could be said to fall neatly into whatever stereotype those shorthand descriptions may call to mind. My mom, for instance, has been known to put up a Christmas tree, while my step-mom, well, she’s the one I recall making potato pancakes, otherwise known as latkes.

I’m pretty certain that on those occasions when I found my step-mom dredging potato patties in flour and dropping them into a sizzling skillet had less to do with their being a traditional Hanukah dish than it was with her interest in using up leftovers, or simply in making something that tastes so extraordinarily good (I mean, who doesn’t want to eat more fried potatoes?). That’s certainly true for me, though it’s a craving I’ve mostly satisfied in the form of French fries and hash browns; latkes, I’m sorry to say, had largely disappeared from the menu. Until recently that is. 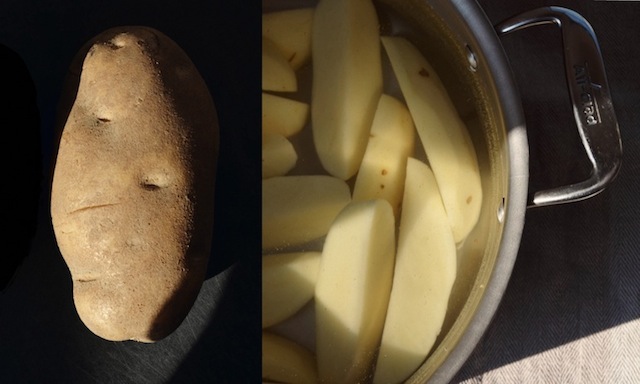 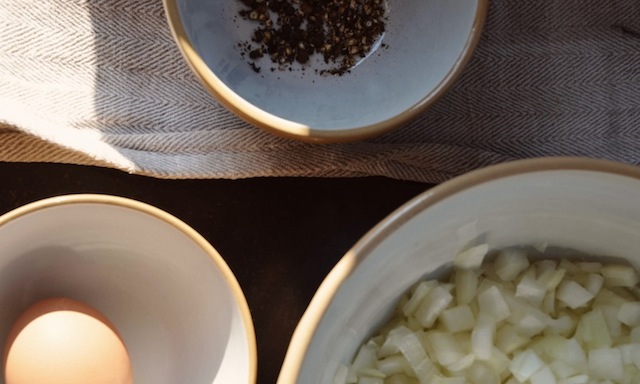 Perhaps it’s a function of growing older and more sentimental, but in the last year I’ve begun to notice a distinct yearning for foods associated with even those Jewish holidays that I’ve never really celebrated. It’s something I first became aware of this fall when the arrival of Rosh Hashanah found me jonesing for spice cake, and it happened again earlier this month with latkes. I never did make that spice cake and am still distracted by it, so I figured my potato pancake impulse was worth paying attention to. Plus I was curious about how to keep the grated potato mixture together when it comes time to flip the pancake (these are the sorts of things that can keep me up at night). Taking a page from my step-mom’s book, I’d tried this myself with leftover mashed potatoes on a few occasions and the results were more crumble than pancake. What was the secret?

I found my answer in the October, 2005 issue of Fine Cooking. Over the years the magazine has published a variety of potato pancake recipes, from one featuring shredded carrots, to another stuffed with mushrooms. I like the version presented here, however, for its simplicity and for how traditional it is — I can imagine my grandmother making these, which is not something I could say about the mushroom-stuffed variety. In fact, she’d probably have known how to make these intuitively, just as she would have known the various steps involved in binding the potato so it doesn’t devolve into a gloppy mess. Creating a pancake that will hold together is actually a three-phase process that involves letting the shredded potato drain in a colander for ten minutes, adding an egg and a bit of flour (as well as a few other ingredients) to the mixture, then squeezing small handfuls of the potato to wring out as much water as you can. This last step is perhaps the most tedious aspect of an otherwise speedy recipe, but one worth taking your time with — rush and you’ll end up with runny potatoes that won’t hold together in the pan. 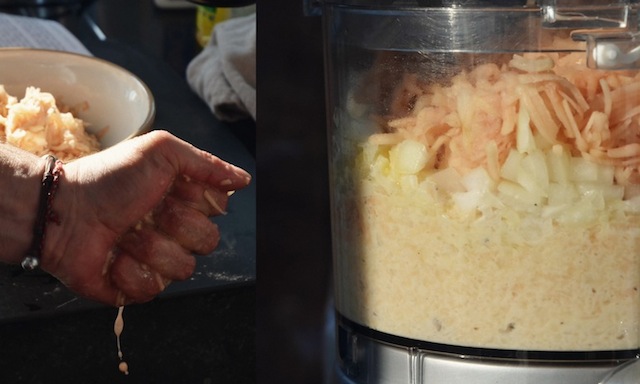 I should also mention that into the potato mixture you add some olive oil, a bit of pepper, and a diced yellow onion — the latter two items being ones that come through loud and clear in the final tasting, and that enhance the overall potato-ness of the dish (in much the way that butter, chives, and sour cream does for a baked potato). And as for that memory of my stepmother dredging her pancakes in flour prior to frying, it’s a step that’s noticeably absent here — the only flour called for being the small amount added to the shredded potato. In fact, even with the various draining steps mentioned earlier, the mixture is far too runny to dredge in anything. Instead, the key to holding the pancake’s shape is to make sure that the corn oil in your pan is sufficiently hot so that when you drop a soup-spoon full of potato into the pan and press it down, the oil sizzles and bubbles around it, turning the edges a golden brown and encasing the starch in a hard, crunchy shell. Once the oil is hot enough, three minutes per side should do it, but carefully check the underside of the pancake before flipping (it should be a deep golden color); turn too soon and it will fall apart. I also found I had more success with keeping the latkes together in the pan when I kept them to around 2½ inches in diameter versus the 3½ recommended by the recipe.

Once you’ve removed the pancakes from the skillet, drained and blotted them, all that’s needed is a light sprinkling of salt — just the thing to corral the various flavors and kick them up a notch. Of course, the traditional accompaniment of sour cream and applesauce is nice here as well and offers the perfect sour/sweet counterpoint, but the pancakes could serve as a side dish, or as breakfast all on their own (think McDonald’s potato patties, only a hundred times better). Crunchy, salty, potato-y — in a word, delicious. I’m glad they’re back on the menu. 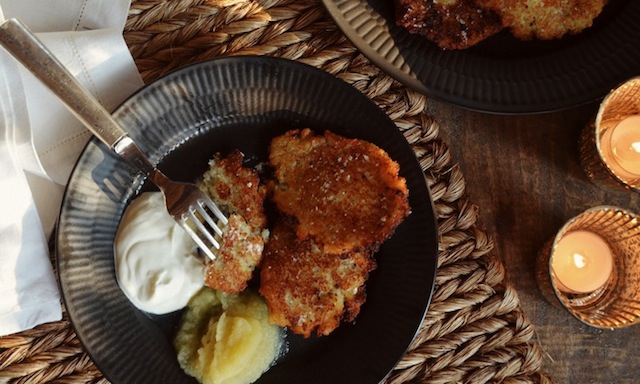 Directions:
—Heat oven to 250 degrees.
—Set a colander in the sink. Grate the potatoes in a food processor fitted with a medium (4 mm) grating disc. Transfer them to the colander and sprinkle with 2 tsp of the salt. Toss and let drain for 10 minutes, tossing occasionally.
—Meanwhile, replace the processor’s grating disc with the chopping blade. Add 1 tbs of the oil and the onion, egg, flour, baking powder, pepper, and the remaining ½ tsp salt to the food processor bowl.
—Return to the potatoes resting in the colander and, in batches, squeeze the liquid from them with your hands. Put the potatoes in the bowl of the food processor with the other ingredients and process for 10 seconds. Stop the machine, scrape the bowl with a rubber spatula, and process again until the mixture is finely chopped, 10 to 15 seconds more. Transfer the mixture to a large bowl.
—Have ready a large plate lined with paper towels. In a 10” skillet, heat 1/8” of the remaining oil over medium heat until the surface of the oil shimmers very slightly. With a soup spoon, carefully ladle four mounds of the potato mixture into the oil and spread them slightly with the back of the spoon until they are about 3½” in diameter. (The oil should be bubbling gently around the pancakes.) Cook until the pancakes are a deep golden color, 2 to 3 minutes. Lift the pancakes with a slotted metal spatula and carefully turn them over. Continue to cook until the second side is a deep golden color, about 2 minutes more. Using the spatula, transfer the pancakes to the paper-towel-lined plate and blot well with more paper towels. Sprinkle lightly with salt. Use the spatula to transfer the pancakes to a baking sheet; keep them warm in the oven while you finish the rest. Continue to add oil between batches as needed to maintain the 1/8” level of the oil. Serve with the sour cream and applesauce on the side, if using. The recipe yields 18 to 20 pancakes.

Make ahead tips:
—If you’re preparing several batches for a crowd, fry the pancakes, let them cool, and freeze them on baking sheets. Once they’re frozen, transfer them to freezer bags. Reheat the pancakes on rimmed baking sheets in a 350 degree oven for 10 to 15 minutes. 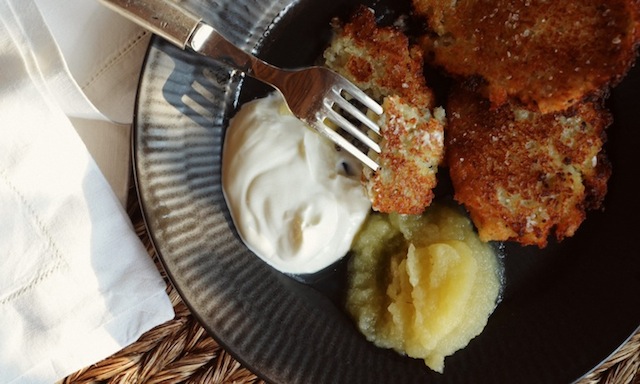