From the July, 2007 Cooks Illustrated

Here in the northeast we’ve been mired in what meteorologists like to call “a trough of low pressure.” For those of us who live here that simply means it’s been raining, off and on, for weeks. If you haven’t been drenched you’re one of the few. Last Thursday, fed up with hauling my umbrella and raincoat around, I decided to give them the day off, and soon found myself greeted by the sort of heavy, arrow-like rain that with breathtaking efficiency can transform you from dry professional to drowned rat. It didn’t help that I was on my scooter, tooling down 2nd Ave., when the heavens opened up. I’m not certain of the physics of it all, but suffice to say that even moving at a pokey 20 miles per hour, you can count on getting roughly twice as wet as that guy walking in front of Dunkin Donuts, struggling to right his inside-out umbrella.

Which is to say that the last few weeks have been a good time to start imagining all the warm — or at least dry — places I might like to travel to. And, since the reality is that I won’t be getting on a plane to anywhere anytime soon, it’s also been a fertile moment for envisioning the sorts of big, rib-sticking meals that are the next best thing to being there. It’s funny how as soon as the temperature drops and the sky turns to slate you start craving the kinds of dishes that haven’t entered your gustatory imaginings in months — things like stews, or roasts, or beef braised in red wine, vinegar, and juniper berries (which I ate at Prime Meats in Brooklyn on Saturday night, and was just about the best thing ever)! 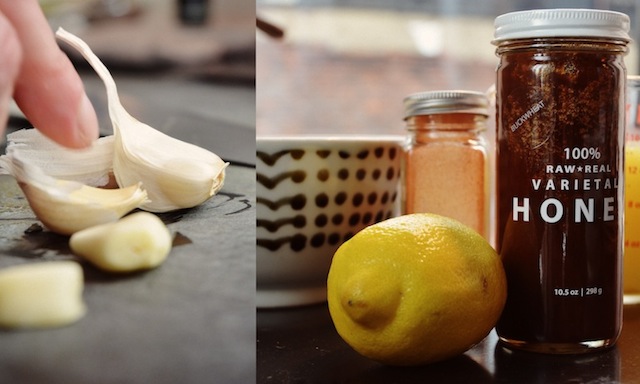 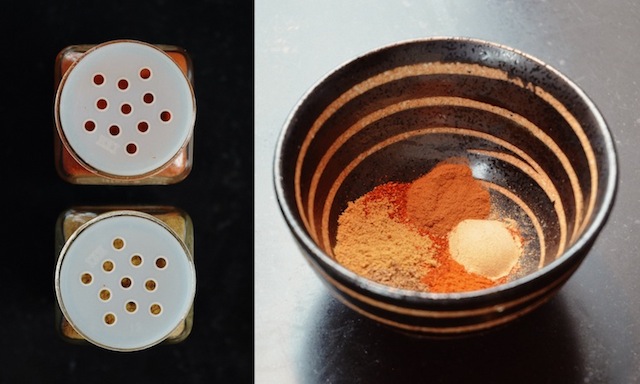 That should give you an idea of where my meathead has been lately. And while I haven’t personally tackled anything quite as deliciously Alpine as Saturday night’s sauerbraten, I have corralled my kitchen to purge a little of the damp and chill that has lately begun to settle in. Case in point: the Moroccan chicken dish I bring to you here. The recipe comes from Cook’s Illustrated and is their abbreviated road map to a classic Moroccan tagine. “Abbreviated” because a tagine typically involves a slow braise at low temperature, whereas this one is done in little more than an hour without sacrificing any of the deep flavors associated with the dish, or risking that the star attraction — the chicken breasts — goes dry. (It’s also made in a standard Dutch oven, as opposed to that traditional clay pot so few of us actually own.) These are just the kind of neat tricks CI has come to be known for.

The key is the browning of the chicken. This is the first step in a relatively simple cooking process, and a move that imbues some all-important flavor to the base of the braising liquid, while also providing the chicken with a welcome bit of crackle. Once the chicken has been browned and removed from the pot, it’s simply a matter of sautéing the onion and lemon zest, throwing in some garlic, adding a variety of spices — all browns, yellows and oranges — until they go dark and start to smell like a North African bazaar (or at least as I imagine one to smell — I’ve never been). At this point you add your carrots and reintroduce the chicken and let the whole thing simmer for between 10 and 15 minutes, flipping the chicken halfway through to make sure it cooks evenly. 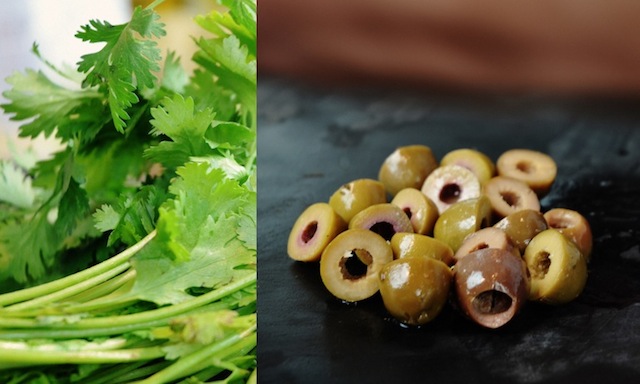 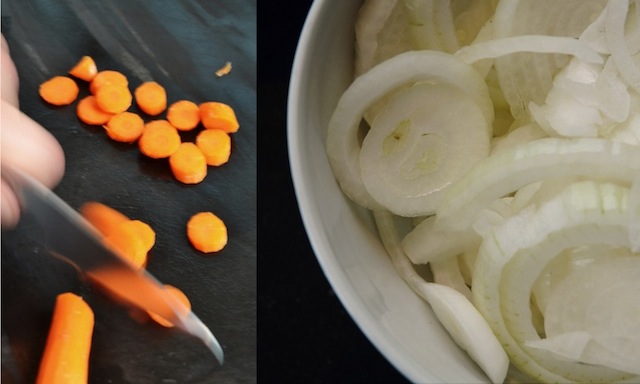 Once your chicken has achieved the proper temperature (about 160 degrees) you remove it from the pot, then add the olives and continue to simmer for a few minutes more, until the carrots are tender and the sauce starts to look less like soup and more like a brothy stew. You then return the chicken to the pot for the third and final time along with some garlic and lemon zest (yes — this recipe involves plenty of knife work), a handful of chopped cilantro, and 3 tablespoons of lemon juice. By this point your kitchen will be smelling so wonderfully fragrant it will be all you can do to keep your fork out of the pot, so make sure you have some couscous at the ready, then pile the whole thing on your plate, and dig in — a sunny North African response to our wet North American autumn.

One final thought about the recipe: while I loved the saltiness of the olives as well as the acidic kick of the lemon zest here, I found myself craving a sweet note in the mix of flavors. To satisfy this urge I added a cup of golden raisins to the pot, just before the chicken went in for the second time, and simultaneous to the carrots. This allowed the raisins a good twenty minutes in the pot in which to plump up and take on some of the flavors of the sauce — nice for the raisins, and even nicer for me. The addition was just what I was looking for and proved the perfect foil for the heat of the sauce and the mellow flavor of the chicken. 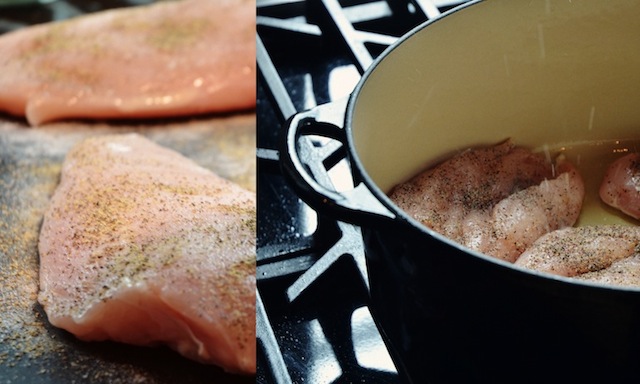 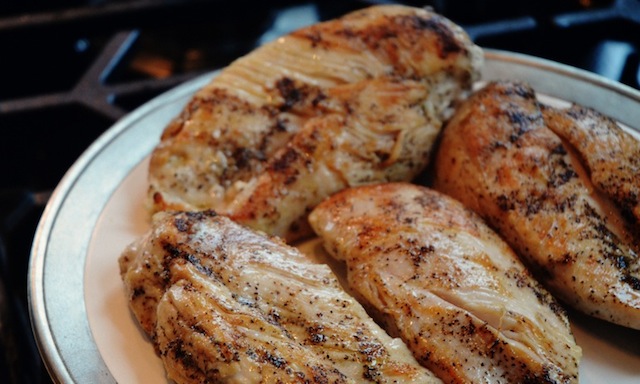 Note: Another of those nagging cooking questions: is “sweet paprika” the same as the variety marked simply “paprika?” The answer is no. Standard paprika — and the type you’re most likely to find at your local grocery store — tends to be mild with just a touch of sweetness, whereas “sweet paprika” (also known as “Hungarian sweet paprika”) is generally brighter in color and has a more pronounced sweetness. If you only have the standard variety on hand (as I did when cooking this dish) some suggest mixing it with a pinch of very fine sugar. For what it’s worth I didn’t bother, which may have been the reason I felt compelled to add those raisins. The flavor was wonderful but even so, the next time I’ll make sure I have sweet paprika in my spice drawer.

Directions:
Combine spices in a small bowl and set aside. Mince 1 strip lemon zest; combine with 1 teaspoon minced garlic and mince together until reduced to a fine paste; set aside.

Season both side of the chicken liberally with salt and pepper. Heat oil in large heavy-bottomed Dutch oven over medium-high heat until beginning to smoke. Brown chicken until lightly golden, about 2 minutes; using tongs, turn chicken and brown on second side, about 2 minutes more. Transfer chicken to a large plate.

Add onion and 2 remaining lemon zest strips to pot and cook, stirring occasionally, until onions have browned at edges but still retain shape, 5 to 7 minutes (add water in increments of 1 tbsp if pan gets too dark). Add remaining 4 teaspoons garlic and cook, stirring, until fragrant, about 30 seconds. Add spices and cook, stirring constantly, until darkened and very fragrant, 45 seconds to 1 minute. Stir in broth and honey, scraping bottom of pot with wooden spoon to loosen browned bits.

Add carrots to pot and arrange chicken on top of carrots. Add raisins if using. Cover and reduce heat to medium-low. Simmer until instant-read thermometer inserted into thickest part of the breast registers 160 degrees, 10 to 15 minutes, flipping the chicken halfway through cooking.

Transfer the chicken to a plate or bowl and tent with foil. Add olives to pot; increase heat to medium-high and simmer until liquid has thickened slightly and carrots are tender, 4 to 6 minutes. Return chicken to pot and add garlic-zest mixture, cilantro, and lemon juice. Stir to combine and adjust seasoning with salt and pepper. Serve immediately. 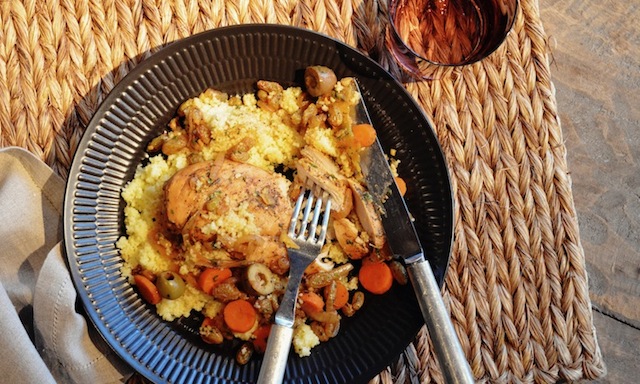