Adapted from Canal House Cooking, Vol. no. 3 (winter and spring) 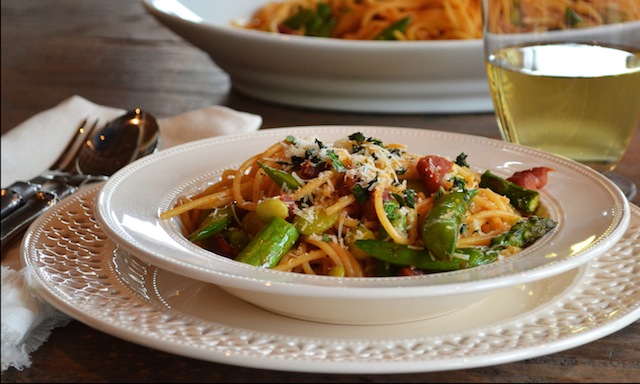 Repeat a phrase often enough and it’s bound to lose something of its original meaning. Such is the case with pasta primavera, a dish that originated to celebrate and spotlight spring’s early glories, but that today has come to mean pretty much any pasta dish featuring pretty much any vegetable, regardless of seasonality. Of course, this hasn’t been helped by the fact that certain of the Italian restaurant chains have taken to offering the dish year-round, no doubt recognizing that diners view it as a healthy alternative to, say, its cream-laden cousin, fettuccine Alfredo. I’m all for healthier eating, but by making primavera available through all four seasons, the very qualities that made it so special originally—the simplicity of its ingredients, the clarity of its flavors—have largely been lost. Regardless of how you feel about carrots or peppers, they have no place in a true primavera, in part because they’re available year-round, and as such lack the sweet, delicate-quality the dish requires to live up to its full potential. So consider this my attempt to wrest what has become a pasta mainstay from the clutches of all those ordinary vegetables, thereby returning it to its proper place—as a seasonal menu item with an expiration date landing squarely on the final day of spring. 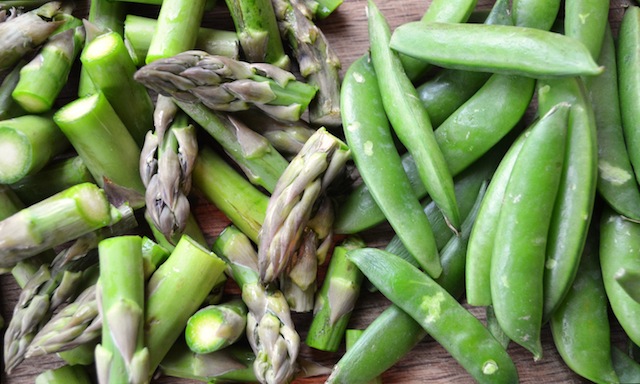 If all this sounds a little strident I should mention that for a long time, and precisely for the reasons listed above, pasta primavera was the sort of thing I never thought of making. So removed from its original form was my concept of the dish that there simply seemed no reason to bother. That changed, however, when I opened Canal House Cooking’s winter/spring collection of recipes and came across the version of the dish I bring to you here (in slightly modified form; more on this a little further down). As can sometimes happen when you stumble upon a recipe that grabs you, a quick scan of the ingredients and instructions opened my eyes to both the dish’s possibilities and the very qualities that had made it so special in the first place. Immediately it moved to the top of my must-cook list.

It’s fitting that this opening of eyes would be thanks to Christopher Hirsheimer and Melissa Hamilton, the fine ladies of Canal House (don’t be confused by the name—Christopher is a woman), since so many of my favorite cooking discoveries of the past few years have come courtesy of this talented duo. And when I say “talented” I don’t mean a Top Chef–style ability to whip up complex dishes in a matter of minutes, or to transform a variety of ingredients into a kind of edible science project (though both are skills the pair may well possess). No, where the two have placed their considerable talents and energy is in the kind of food people sometimes call “honest”—dishes with a focus on seasonality, bold flavors, and the primacy of quality ingredients. Think roast chicken of the most flavorful variety, and you get an idea of the culinary territory in which the pair elects to toil. 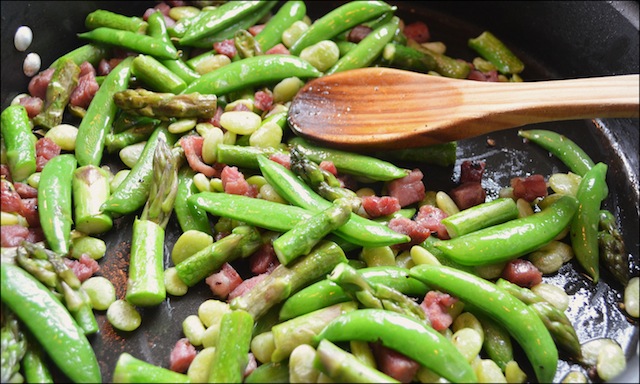 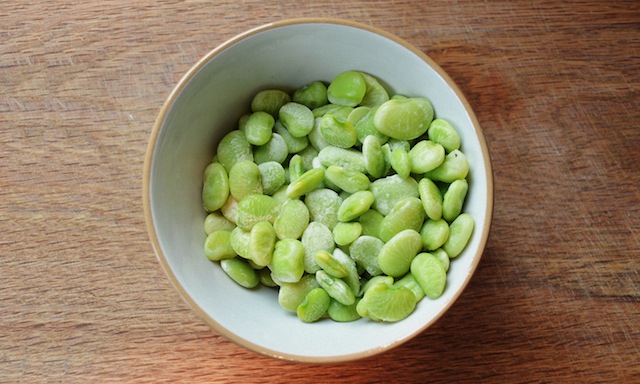 All of which makes pasta primavera a natural for them, and explains why their version of the dish would immediately grab me by the apron strings. Finally, here was a rendition that practically screamed the word, “spring!” What’s more, since the goal of the recipe is to capitalize on the bright flavors of the season’s young vegetables, preparation and assembly require little more than a quick sauté and a gentle toss. (Lengthy cooking time would, of course, rid the ingredients of the very things that make them so appealing, namely their natural sweetness and their textural snap). So from start to finish, the entire enterprise should take little more than half an hour, making this the perfect meal for a busy weeknight.

Which brings me to the ingredients themselves. As mentioned earlier, I modified the recipe slightly from its original form, both because precise measurements were not always included for the various ingredients (namely for the fresh mint and the grated pecorino, both of which are used to garnish the individual servings), and because some of the vegetables were simply not available when I went to the market. To the first point I assume that it was Hirsheimer and Hamilton’s intent that those working with the recipe simply follow their own instincts when it came to adding the herbs and cheese to the finished dish, and that, of course, makes perfect sense. Nonetheless, if only as a guide I often like an idea of what amount to start with, and so have provided those here—with the understanding that you will play with the amounts as you see fit. 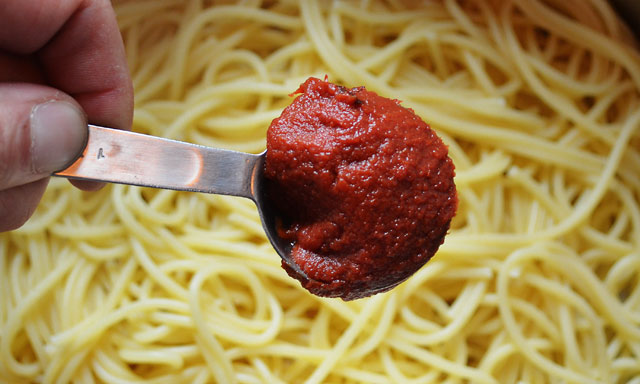 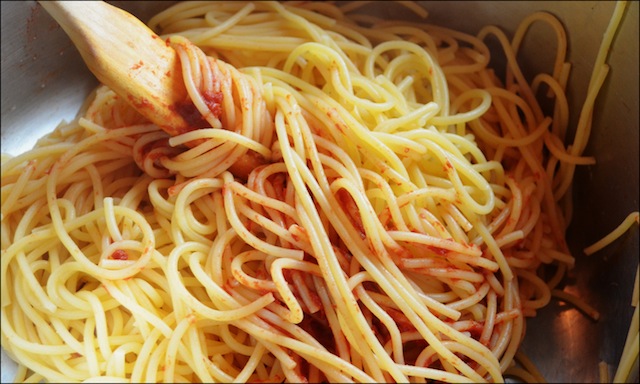 As for the dish’s star ingredients—the vegetables themselves—since the goal of the Canal House recipe is to make the most of what’s in season, I felt no compunction about swapping out those items that weren’t available (namely fresh fava beans) with those that were (extraordinarily sweet snap peas). In other words, use the recipe as your guide, but let the produce bin dictate your decisions. On both of the two days I made the dish this meant snap peas, but it could just as easily have been fiddleheads, baby zucchini, edamame, or yes, those fava beans listed in the original recipe. The point is to maximize what’s freshest—and presumably that’s the stuff on most visible display—and you can’t go wrong here.

That said, if all else fails, frozen vegetables can be a good alternative to fresh, and while it would be a shame to go that route for everything in the dish, even the Canal House duo (seasonality-sticklers that they are) list frozen peas as a viable option in their list of ingredients. Given the fact that the original recipe had done this, I felt okay about swinging by the frozen foods section and picking up a package of lima beans when I couldn’t locate the range of fresh spring vegetables I needed (it was early in the season and there was a limit to how much was available). Still, I also had fresh asparagus and those snap peas in my shopping cart—elements I knew would go a long way to balancing out any shortcoming presented by the frozen lima beans. So consider the mix when making your decision.

Also, having never made a primavera before, I confess to being a little surprised by the presence of a cup of diced smoked ham in this recipe. And while I suppose one could get away with omitting it, I found its presence here to be key, offering a salty balance to the natural sweetness of the veggies. In fact, by first browning the ham in a skillet along with a few tablespoons of extra-virgin olive oil prior to adding the vegetables, the fat from the ham combines with the oil to provide a simple pan-sauce that coats the vegetables and ultimately works its way around the strands of spaghetti. A tablespoon of tomato paste for a subtle acidic component, plus a scattering of cooling mint and salty pecorino cheese is all it takes to round out this simple medley of flavors.

If you ever wondered what spring tasted like, here’s your answer. Get it while you can! 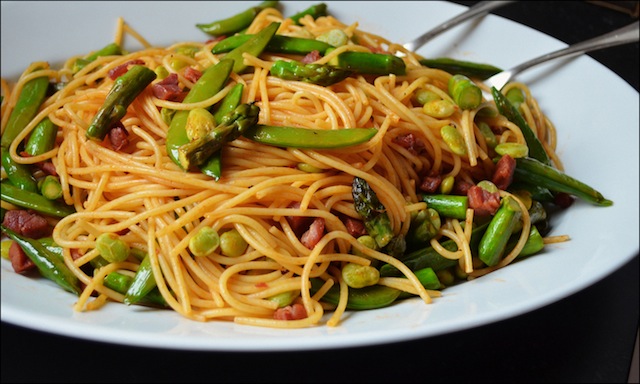 Directions:
—Fill a large pot with water, add a few pinches of salt, and bring the water to a boil over medium heat.
—Meanwhile, heat the olive oil in a large skillet over medium heat. Add the ham, and cook, stirring often, until the ham is lightly browned. Add the favas, peas, and asparagus (TRG note: or whatever vegetables you’re using), season with salt and pepper, then add a splash of water. Cook, stirring often, until the vegetables are just cooked, about 3 minutes. Remove from the heat, cover, and set aside.
—Add the pasta to the boiling water and cook until just tender, about 10 minutes. Drain, return it to the pot, add the tomato paste, drizzle with some really good olive oil, and season with salt and pepper.
—Add the ham and vegetables and all their pan juices to the pasta and gently toss everything together. Divide between 8 individual warm bowls and sprinkle with fresh mint and pecorino romano. 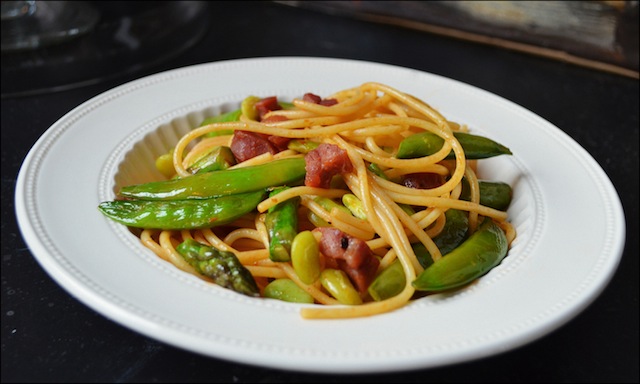