From America’s Test Kitchen (click here for the recipe) 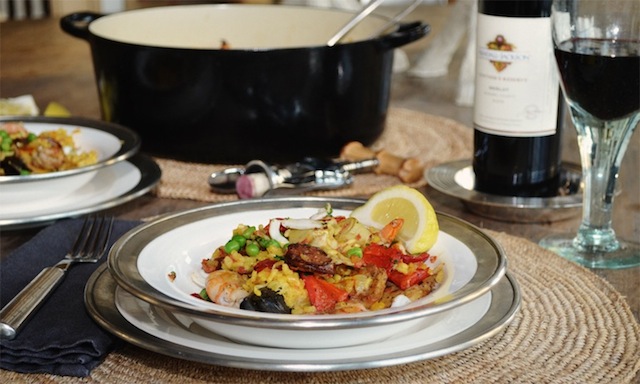 I’m not one of those people whose appetite goes into hiding when the temperature spikes and the air gets soupy. In fact, when faced with a 90-degree day and near 100 percent humidity, I’ve been known to run to the nearest Cuban restaurant in search of a plate of picadillo and some fried plantains. It was just that impulse that found me in the kitchen on a hot summer afternoon recently, assembling the various ingredients needed to make what many consider the national dish of Spain — paella. Like many of my favorite warm weather foods, there is nothing “light” about paella, but with its bright yellow color and abundant use of seafood, it’s also undeniably summery.

My introduction to paella came several decades ago. I was a junior editor at a travel magazine at the time and had been sent on a press junket to Barcelona — the sort of thing organized by tourist bureaus everywhere in the hopes of generating travel stories. For our group, that meant being wined, dined, and shuttled to every notable site in the vicinity, all on a carefully monitored timetable. It was a nice introduction to the city, but the memory that’s proved the most enduring has been that paella — one that was studded with bits of chicken, seafood, and chunks of spicy pork sausage, all of it held together by a mound of flavorful rice the color of sunshine. I was hooked. 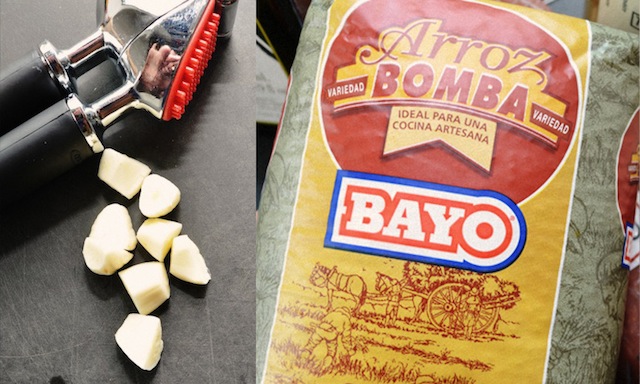 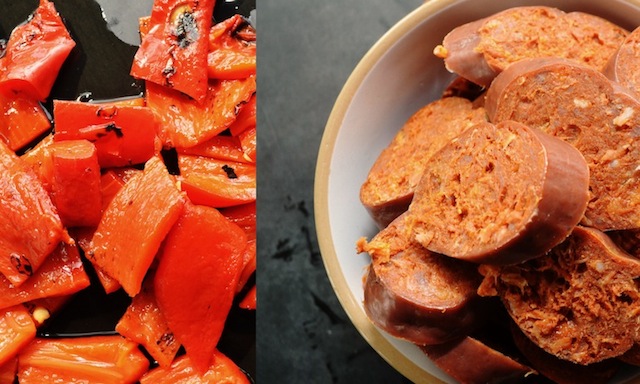 I haven’t been back to Spain since that trip, but in the last twenty years I’ve eaten a lot of paella at a lot of restaurants, and none has come close to that initial experience. Some has had too little moisture — or too much; others have suffered from sub-par ingredients; still others have displayed a noticeable absence of saffron, costing the dish its signature flavor and all-important color. Given all this you might think I’d have given cooking paella a whirl myself, but something about making the dish has always held me at arms’ length. For one thing there was the issue of that special pan, a piece of equipment I always believed was critical to the process (and that I was resistant to allotting my precious kitchen real estate). But most daunting was the vague sense that to make paella one needed hours in the kitchen and miles of counter space — in other words, the sort of activity best left to the professionals. And then I discovered something exciting: I was wrong.

This realization came to me as I was combing the “America’s Test Kitchen” website recently and discovered their recipe for chicken and seafood paella. The first thing that caught my eye was that they’d eliminated the specialized paella pan, substituting it for a standard 6-quart Dutch oven. But reading on, I found that they’d also circumvented some of the more time consuming aspects of traditional preparations, so instead of seeding and grating a tomato, they suggested mincing a can of diced tomatoes. And that labor intensive lobster component? — eliminated entirely. Most importantly, however, their version retained many of the ingredients I love best in paella: spicy chorizo, meaty shrimp, chunks of chicken, and a scattering of mussels, arranged like tiny soldiers across the paella’s yellow terrain. 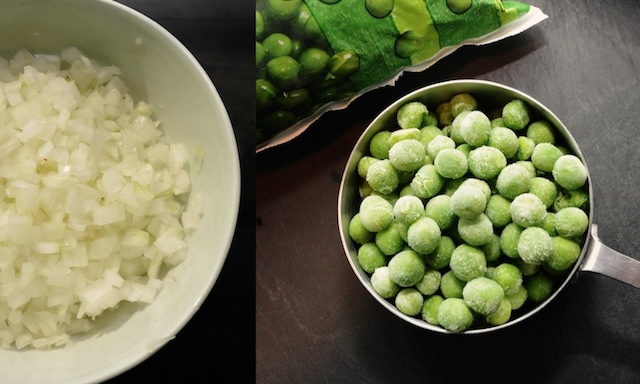 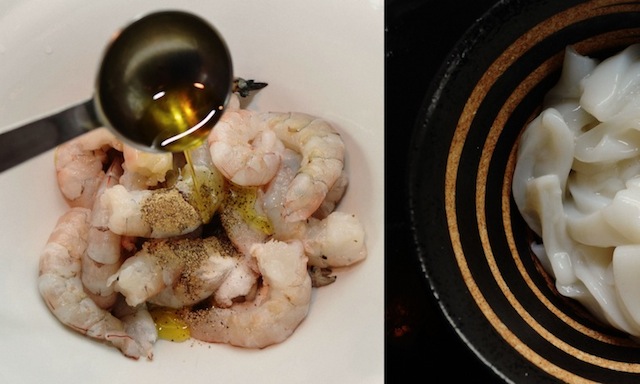 But the ATK recipe got me thinking: if I was going to take some shortcuts, couldn’t I simplify the red pepper step by substituting a good quality roasted and jarred variety, instead? True, it doesn’t take that much effort to chop and sauté a pepper, but in a recipe with as much prep time as this one, every minute counts (I also though the acidic quality of the jarred variety would be a good addition and bump up the other flavors). And just in case you’re beginning to think I’m lazy, I also decided to add two ingredients I recalled from my initial paella encounter — a handful of marinated artichoke hearts, which I buried in the rice before baking; and a few pieces of squid, which I sliced into rings and tossed with salt, pepper, olive oil, and some pressed garlic.

Also, while the ATK recipe calls for Valencia or Arborio rice I decided to go for a lesser-known variety known as Bomba. A friend had recently told me about this kind of rice and explained that while it can be more expensive, it tends to soak up more liquid, which is, of course, exactly what you want in paella. Supposedly this quality makes it the preferred variety of paella rice in Spain. I can’t speak to this claim with any certainty, but I do know that mine was perfect — each grain fat with the combined flavors of the sofrito, the chicken stock, and the white wine.

A few final comments about this recipe: although ATK has done a brilliant job of streamlining the cooking process here, this is still a time-consuming endeavor, with lots of chopping, scrubbing, trimming, and mashing before you even turn on the stove. The good news is that all the effort is on the front end, so once you slide the assembled paella into the oven, you can plop down on the sofa with your guests knowing that your work is pretty much done. What’s more, this recipe serves six (four in my house) so it’s great for a crowd. 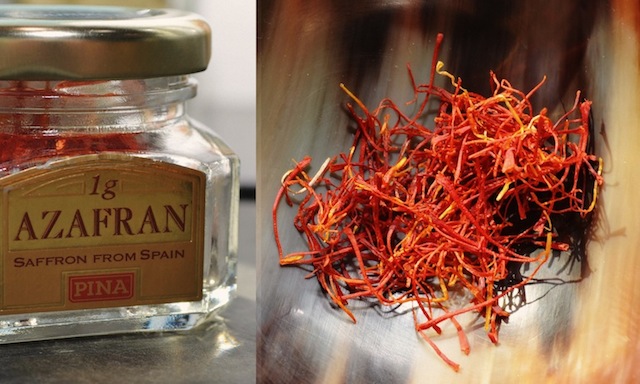 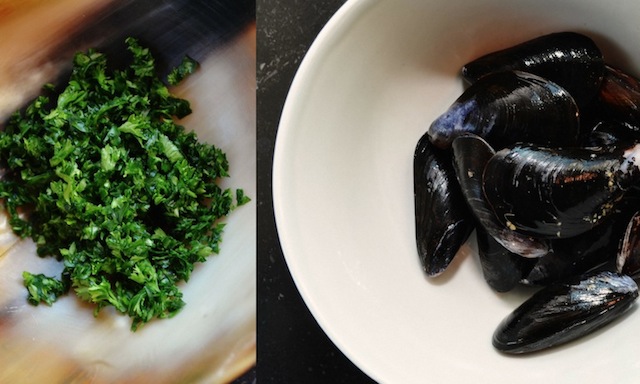 Also, because most of the cooking in the ATK version is done in the oven, soccarat — the crusty browned rice that traditionally forms at the bottom of the pan — is absent here. For those that miss it, ATK has offered some tips on how to achieve the affect (just click on the link at the top of this posting and go to step 5 in the instructions). For what it’s worth, I didn’t bother and didn’t miss it, but either way, you can’t go wrong with this recipe. It’s exactly the sort of comfort food you want, regardless of the weather. 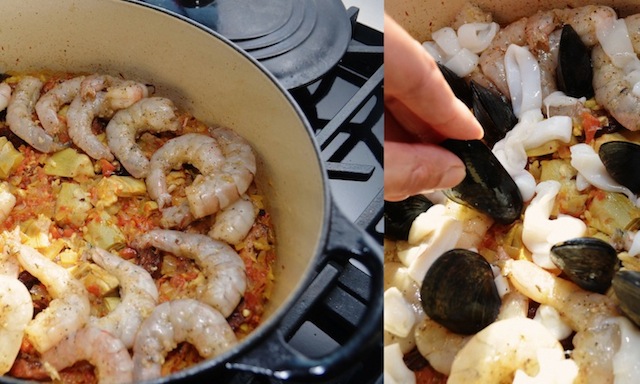 Add 1 teaspoon oil to Dutch oven; heat oil until shimmering but not smoking. Add chicken pieces in single layer; cook, without moving pieces, until browned, about 3 minutes. Turn pieces and brown on second side, about 3 minutes longer; transfer chicken to medium bowl. Reduce heat to medium and add chorizo to pot; cook, stirring frequently, until deeply browned and fat begins to render, 4 to 5 minutes. Transfer chorizo to bowl with chicken and set aside.

Add enough oil to fat in Dutch oven to equal 2 tablespoons; heat over medium heat until shimmering but not smoking. Add onion and cook, stirring frequently, until softened, about 3 minutes; stir in remaining garlic and cook until fragrant, about 1 minute. Stir in tomatoes; cook until mixture begins to darken and thicken slightly, about 3 minutes. Stir in rice and cook until grains are well coated with tomato mixture, 1 to 2 minutes. Stir in chicken broth, wine, saffron, bay leaf, and ½ teaspoon salt. Return chicken and chorizo to pot, increase heat to medium-high and bring to boil, uncovered, stirring occasionally. Cover pot and transfer to oven; cook until rice absorbs almost all liquid, about 15 minutes. Remove pot from oven. Uncover pot; bury artichoke hearts (if using) into rice. Scatter shrimp and squid rings (if using) over rice, insert mussels hinged side down into top layer of rice (so they stand upright), arrange bell pepper strips in a pinwheel pattern, and scatter peas over top. Cover and return to oven; cook until shrimp are opaque and mussels have opened, 10 to 12 minutes.

Let paella stand, covered, about 5 minutes. Discard any mussels that have not opened and bay leaf, if it can be easily removed. Sprinkle with parsley and serve, passing lemon wedges separately. 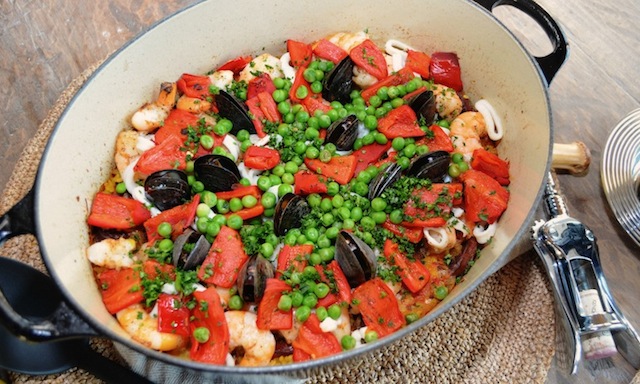