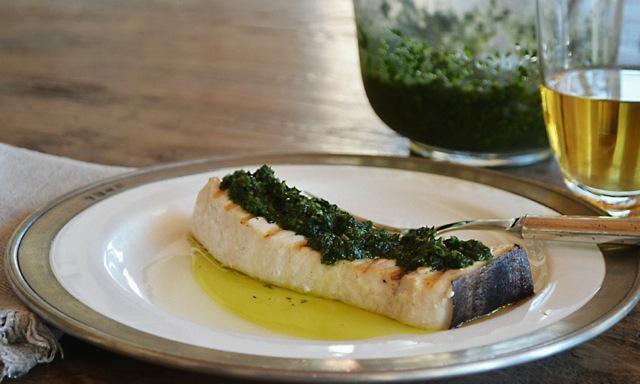 Even though summer isn’t officially over for another eleven days, what with New York City kids now back in school, and the sun rising ever later (I’m sure there was more light when I took Sid and Lily for their morning walk last week!), I’m already finding myself nostalgic for the season that’s not quite over. With that in mind I thought I’d share with you one of my favorite recipe discoveries from the past few months—a souvenir, if you will, from the summer of 2013. It’s for a salsa verde that I’ve been enthusiastically spooning over grilled fish and meat since first trying it back in July. “Souvenir” is actually an apt word here since the sauce is one I was worried I’d lose track of as I moved on to other more fall-oriented dishes, a concern I was able to resolve by posting it here (a personal benefit of this site is that once posted, I always know where I’ll be able to find my favorite recipes). But beyond the immediate advantages of providing a safe holding place for this zippy, pesto-like sauce, there was the fact that after serving it to a few friends I was immediately besieged with requests for details on how to make it. And so I determined that this wasn’t just a recipe worth saving, but one that demanded sharing as well. 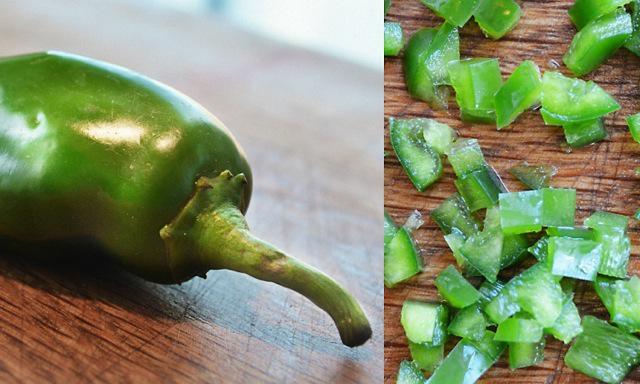 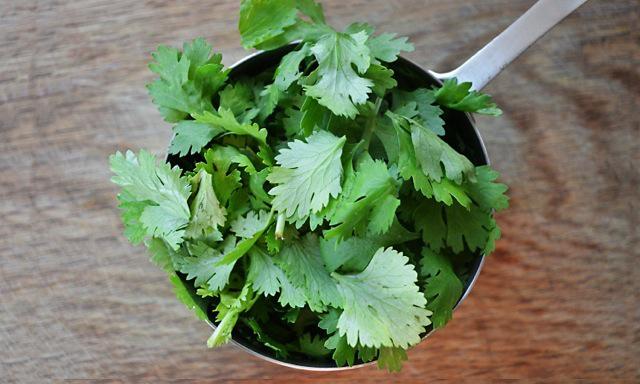 In truth, there’s really nothing much to it, which is part of what makes the sauce so special. Made from just a few brightly flavored ingredients, the net result is that each of the individual flavors can be discerned in the finished product—even as they merge to make something uniquely all its own. To begin you create a paste (using either a food processor or a mortar and pestle, the former obviously being the more efficient option) comprising chopped garlic, capers, a chile (either a Fresno or red jalapeño variety, more on that in a moment), and 6 anchovy filets. This last ingredient is listed in the directions as optional, and it’s one I elected to omit on several initial outings as anchovies have never been my favorite. The thing I always forget about anchovies, however, is when merged with other ingredients, it’s not their strong, fishy taste that comes through but rather a salty base note. As I later learned when I finally used the anchovy, that’s an important quality in the context of this sauce. So while this salsa verde is excellent either way, for what it’s worth I’ll be going with the anchovy in the future—an ingredient that also seems to eliminate the need for the kosher salt addition in the final tasting. 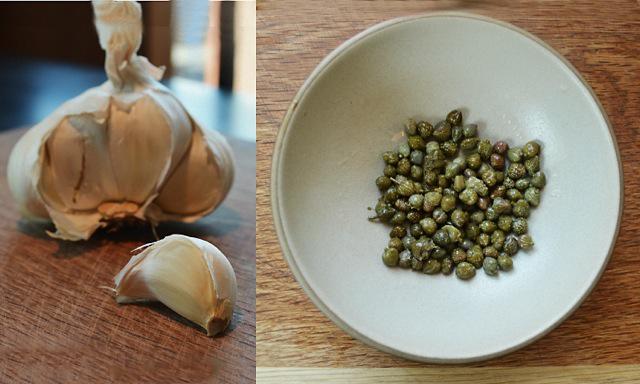 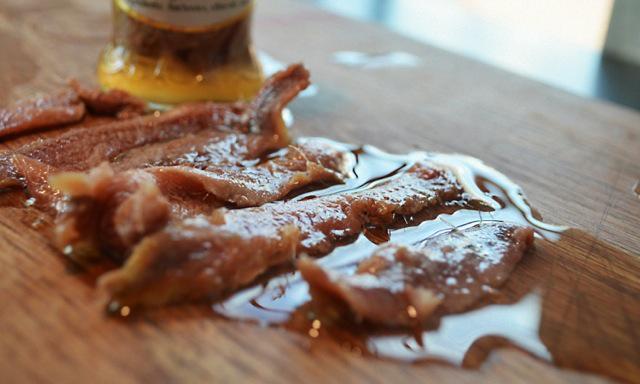 As for the chile, on each of the multiple times I made the sauce I was unable to locate either the Fresno or the red jalapeño called for by the recipe, forcing me to work with the only kind I could find—the standard green jalapeño. Now I’m no chile expert, but from what I’ve read this variety of pepper has both a grassier flavor and is marginally less spicy than the red. Even so, I chose to work with just half of the green jalapeño, a quantity that imbued the sauce with just the hint of spicy heat I was looking for. So don’t feel you need to scrap the recipe if you can’t find the precise kind of chile called for by the recipe, but do adjust the quantity depending on your appetite for spice. 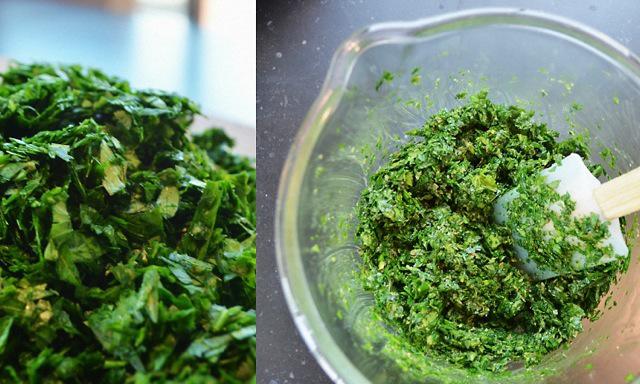 In any case, once the above ingredients have been pulverized, transfer the mixture to a bowl, add the various chopped herbs (flat leaf parsley, mint, and cilantro—a combination that gives the sauce much of its bright, summery flavor), and stir to combine. Then, using a fork, slowly whisk in a quantity of extra-virgin olive oil. And that’s it, with the exception of letting the sauce stand at room temperature for a half hour, a critical thirty-minutes that allows the various flavors to meld and deepen.

True, plucking and chopping the volume of herbs called for here can be time consuming, but the good news is that the sauce will keep in the fridge for up to a week (be sure to bring it to room temperature before serving) which means it can be made well in advance of mealtime. Plus one batch can be served on multiple occasions. What’s more, when spooned across the surface of a freshly grilled swordfish steak, this pleasantly chunky sauce delivers a medley of flavors that embodies summer eating. And that’s a great thing to have in your arsenal, no matter what the season.

Directions:
—Combine anchovies (if using), garlic, capers, and chile in a food processor, or with a mortar and pestle. Process or pound with a pestle until a chunky paste forms. Add herbs and stir to combine.
—Transfer paste to a bowl. Using a fork, slowly whisk in oil to make sauce. Season to taste with salt, if desired. (TRG note: If using the anchovies you will probably not need more salt)
—Let stand at room temperature for 30 minutes to allow flavors to meld.
—Note: Sauce can be made 1 week ahead. Cover and chill. Bring to room temperature and stir before serving. 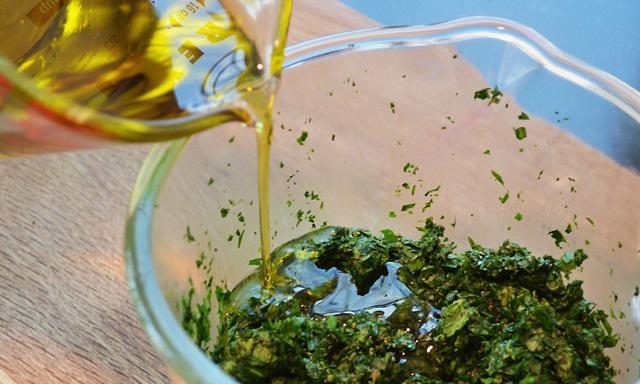 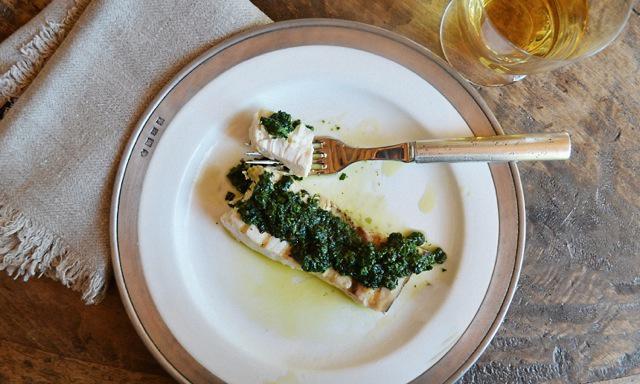