From the June/July, 2011 Saveur (click here to view the recipe) 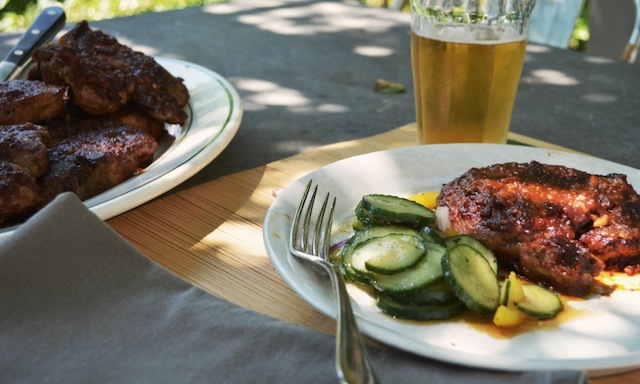 When I was a teenager there was an amazing barbecue joint called The Rib Crib not far from where my father and stepmother lived in the Philadelphia neighborhood of West Mt. Airy. Despite its proximity to the historically high WASP zip code of Chestnut Hill, the take-out operation — little more than a chipped formica counter, a formidable smoker, and a handful of plastic folding chairs — was a taste of the real South, where a bundle of succulent ribs came with one of two lip-smacking sauces (mild or spicy, both wonderfully heavy on the vinegar), and where a stack of pillow-y Wonder Bread would invariably be nestled in beside your order, all of it wrapped in a large expanse of tin-foil. Those take-out dinners were some of the best meals of my childhood, a memory that unconsciously made the insides of my mouth pucker recently as I flipped through the June/July issue of Saveur. 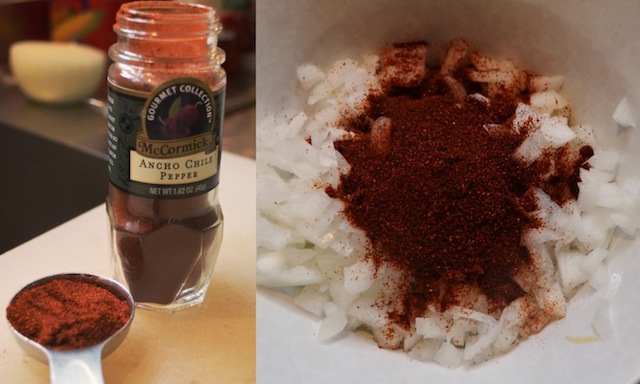 No cooking magazine does a better job of exploring the various corners of the globe through food than Saveur, and for summer they take us to the heartland of America otherwise known as barbecue country. Of course, “barbecue” can mean any number of things depending on where you plant your smoker, and the magazine zeroes in on many of the principal points of interest here — be it “Texas-style beef ribs,” “Lexington pulled pork,” or something called “barbecue spaghetti,” which Saveur identifies as a classic Memphis-style side dish that’s a great way to use up left-over pulled pork. They all sounded enticing to me, but the one I couldn’t get out of my head was a dish misleadingly tagged, “St. Louis country-style ribs.” 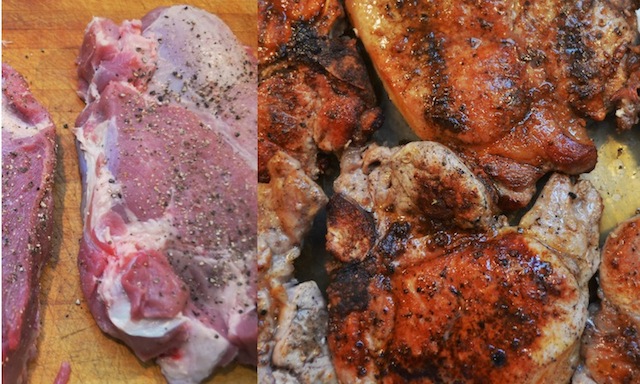 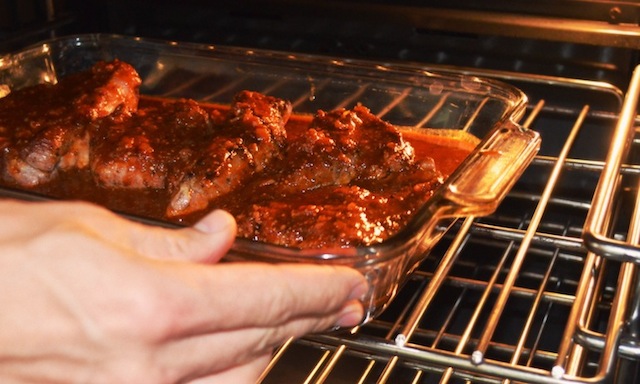 Why misleading? Because despite the name and the fact that the recipe calls for 6 “country-style pork ribs” the meat in question isn’t a rib at all, but rather a one-inch thick slab of well-marbled pork meat, cut from the portion of the loin closest to the shoulder, and that may or may not have as many bones in it. All of this is helpfully explained in the magazine, in a section called “Classic Cuts,” a kind of barbecue primer that identifies the various cuts called for in this type of cooking (and which, if you live outside of barbecue country as I do, you’d be well-served to share with your butcher, as mine had no clue what I was I was talking about when I asked for “country-style pork ribs”). Once I repeated what was written in the magazine, however, my butcher pulled a hefty loin from inside his case and sliced off four large slabs of pork, similar in its rich meaty-ness to a pork chop, but bigger and without as many bones.

One of the things I love about this recipe is that it’s done in the oven, so there’s no need for any sort of specialized equipment. In fact, all that’s involved here is preparing the sauce (rendered bacon, plus tomatoes, brown sugar, vinegar, mustard, and spices), searing the meat, then doing a quick braise of the sauce-drenched pork in the oven for an hour or so, until the meat is fall-apart tender and the sauce is caramelized. That may sound quick for a braise, but as these “ribs” have few if any bones, they cook that much faster. Just make sure your butcher sticks to the one-inch thick cut called for in the recipe — mine did not the first time I made this, and the results both took longer and were not as tender as repeat efforts, when I was working with a thinner cut.

Still, even the thicker version was a winner — the steak-like “ribs” had great flavor and were still quite tender (if not quite falling apart). And the sauce, well it had all of the vinegary bite I remembered so rapturously from my childhood visits to our local rib joint.

Note: Despite the name, country-style pork rib are, in fact, one-inch thick slabs of well-marbled pork meat, cut from the portion of the loin closest to the shoulder. They may, or may not, have as many bones in them as an actual pork rib.

Directions:
—Heat oven to 350˚. Heat bacon in a 4-qt. saucepan over medium heat; cook, stirring, until fat renders, about 6 minutes. Add chile powder, garlic, and onions, and cook, stirring, until soft, about 5 minutes. Add tomatoes, sugar, vinegar, mustard, Worcestershire, salt, and pepper, and bring to a boil; cook for 5 minutes. Remove from heat; set aside.
—Season ribs with salt and pepper. Heat oil in a 12-inch skillet over medium-high heat, and working in batches, add ribs and cook, turning once, until browned on both sides, about 8 minutes. Transfer ribs to a 9- by 13-inch baking dish, and pour sauce over to cover. Bake ribs until the tip of a small knife slips easily in and out of the meat, about 1 hour. 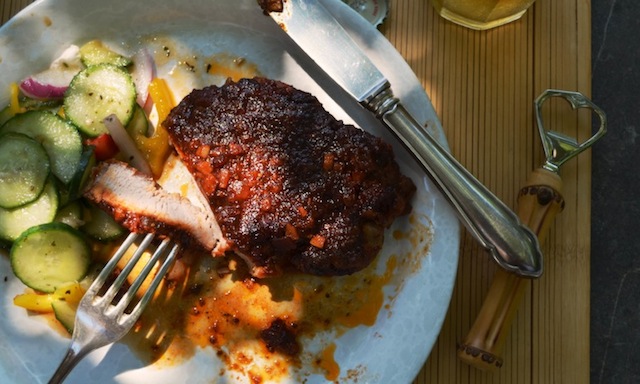