From the April/May, 2011 Fine Cooking (click here to view the recipe)

Although matzo brei (or “fried matzo” as it was commonly known in my house) was a weekend breakfast staple when I was growing up, it’s one of those things from childhood that I’d pretty much forgotten about — that is until I discovered a recipe for it in the April/May issue of Fine Cooking. As soon as I saw the photo, memories of my mom cooking up an enormous batch of the stuff in her large black skillet while I hovered hungrily around the kitchen came rushing back to me. After thirty plus years, I couldn’t wait to give it a try myself. 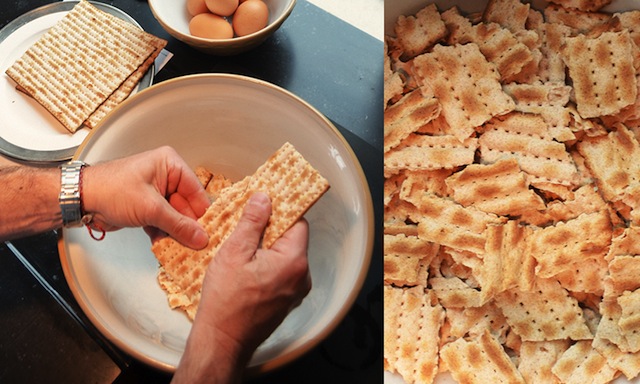 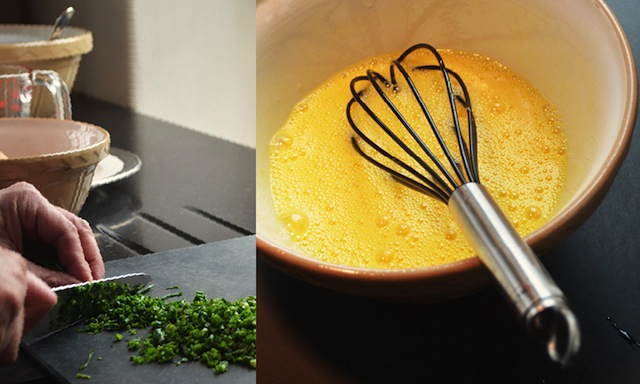 So what is fried matzo? Simple: a mixture of eggs, butter, onion, and crumbled matzo — think scrambled eggs with a little added bulk, courtesy of the cracker-like bread. Matzo, of course, is commonly served during Passover, but you can find it year round at practically any supermarket (it comes in both salted and unsalted varieties, though for the purpose of this recipe go for the unsalted).

Although the Fine Cooking version calls for thinly sliced chives, the family recipe my mom follows (listed below) suggests sautéed onions instead. An argument can be made for either approach — the chives add a fresh jolt of spring like color, while the caramelized onions add a more concentrated sweetness (plus a little something extra to the texture). Not surprisingly, I initially felt a strong preference for the version I grew up eating, though having now tried the Fine Cooking recipe a number of times I’m not so sure. While I do like the caramelized onion in the mix, I’ve begun to think that the chive is a more effective bullhorn for the dish’s otherwise quiet ingredients (eaten alone, matzo does not make a huge taste impression). 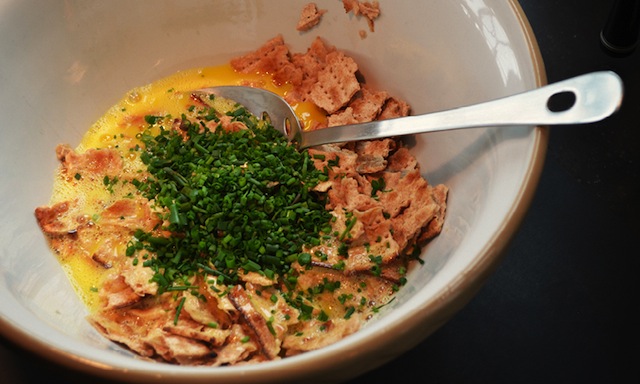 But there’s another major difference between the two recipes and that’s the amount of matzo used (my mom’s version calls for 2 1/2 pieces, versus Fine Cooking‘s four). After several tastings I’ve come to the conclusion that there’s no “correct” answer here; sometimes I like it more starchy, sometimes less — it’s simply a matter of personal taste. So play around with the quantities and see what suits you best.

One suggestion from the Fine Cooking folks that you definitely won’t want to mess with, however, is the use of a non-stick frying pan. As fond as I am of the esthetics of a cast iron skillet I also recall that part of our weekend ritual involved letting the pan soak for several hours after cooking, at which point some unlucky person (usually my mother) would attempt to chip away at the cooked-on egg — a process that inevitably involved a lot of hard work. That’s one tradition no one needs to hold to.

Directions:
—Break matzos into small pieces. Place in bowl and moisten with ½ cup water. Set aside.
—Chop onion and sauté with 3 tablespoons butter in a large non-stick skillet until onions are softened and slightly golden in color.
—While onions sauté, beat eggs. Drain water from matzo and gently add to egg mixture.
—Pour into skillet with the sautéed onions and stir frequently until the eggs are set. Salt and pepper to taste. 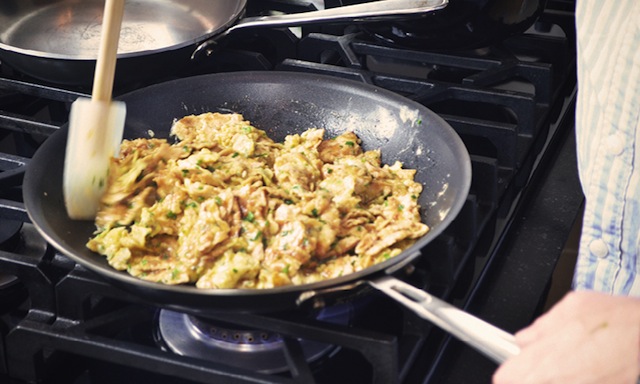 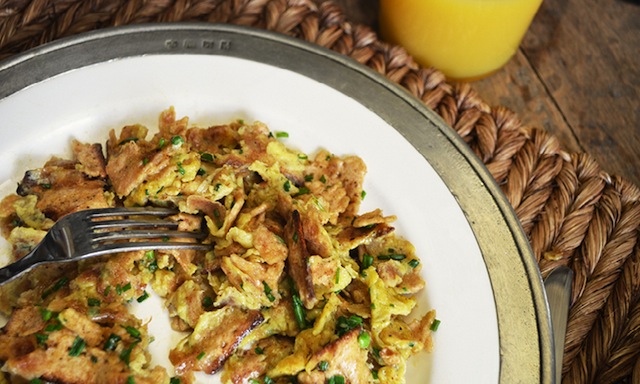