From the Aug./Sept. Fine Cooking

One of the questions I’m constantly asking myself when deciding what to post each week is whether a particular recipe falls within that sweet spot that will make it either so ridiculously easy that you don’t need me to tell you about it, or so complex that you’ll immediately dismiss it as unrealistic. This recipe for corn salad falls squarely in the former category—so squarely, in fact, that even as I was taking the photos you see here, I still wasn’t convinced that they would make their way onto the site. Ultimately I changed my mind, though, and here’s why: it’s a recipe worth knowing about. And perhaps more importantly, it’s just the sort of recipe I seem to go looking for each August . . . and if I’m searching for it, I can only assume that some of you are as well. I should clarify that it’s not so much the ease I’m after this time of year (though the benefits are obvious when the weather gets warm and sticky), but rather one that will transform the corn I love but by mid-August have generally wearied of eating in the traditional way into something just a little bit more interesting—and that ideally won’t require an accompanying roll of dental floss. 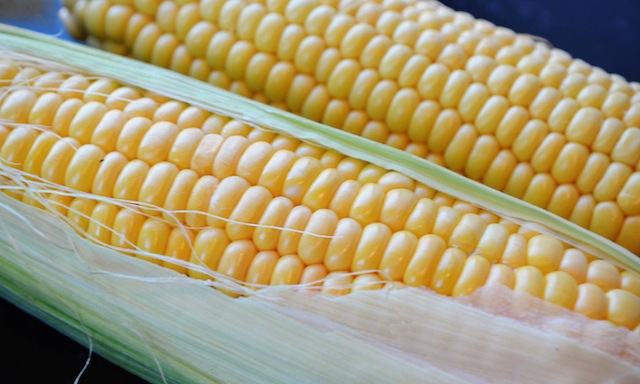 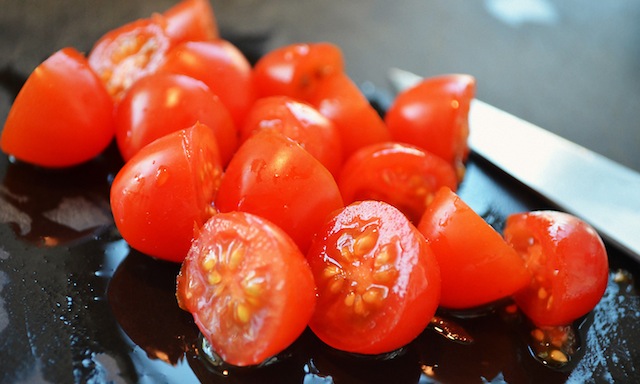 In other words, what I’m looking for is some version of corn that doesn’t completely transform the starch into something else entirely, but that will gently nudge it in a new direction, and hopefully in the process do away with the cob altogether. Something like the corn salad I bring to you here. Many Augusts ago a friend made a similar dish for me, and though she promised to pass along the recipe, it never came through (or if it did I promptly lost it), and my subsequent searches and efforts at replication fell short—all of which meant that a good corn salad took on for me a kind of holy-grail-of-summer-cooking quality. So when I saw this recipe for corn and cherry tomato salad in the new issue of Fine Cooking it immediately caught my eye because it called into play the two key ingredients I recall from that earlier salad. But the fact that the whole mixture was tossed with a generous splash of fresh lemon juice and a sprinkling of chopped fresh tarragon had an undeniable appeal as well. (If I start sucking on the inside of my cheeks while reading a recipe as I did here, it’s generally only a matter of time before I’m assembling it in the kitchen.) 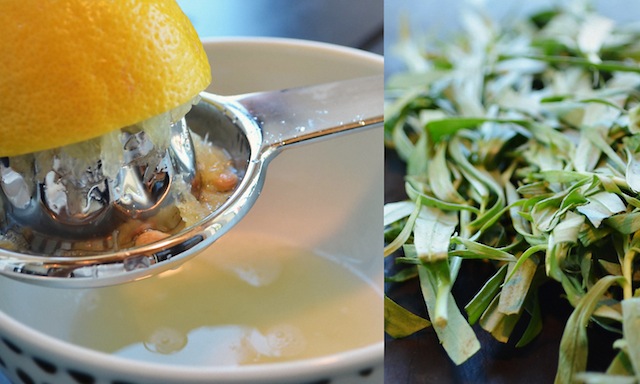 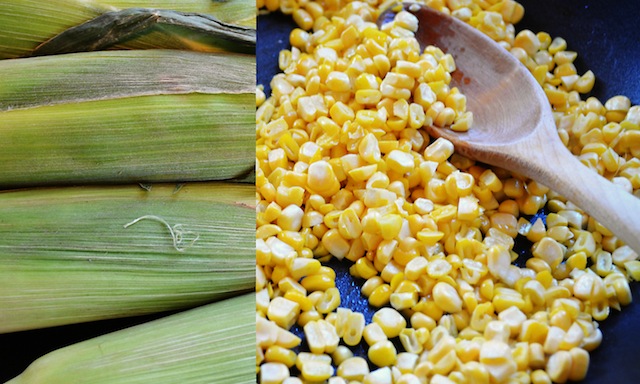 In any case, with the addition of a small amount of extra-virgin olive oil, a sprinkling of kosher salt, and a few grinds of black pepper, those four ingredients—the corn, the tomatoes, the lemon juice, and the tarragon—are essentially all there is to this recipe. Which in large part explains my hesitation in bringing this to you: there just didn’t seem to be enough to it. But then again, this is corn we’re talking about—an item that at its very freshest can be enjoyed unadorned (i.e. no salt or butter needed) and with minimal, if any, cooking—so maybe that light touch is exactly as it should be.

While this salad is a long way from naked, the cooking component is definitely a minimal one, limited as it is to a quick sauté (two minutes or until just softened) of those two cups of fresh corn kernels in the company of a single tablespoon of the extra-virgin olive oil. After that, you can switch off the stove and forget about it. In fact, all that remains is to transfer the corn to a medium-sized bowl, give it a chance to cool slightly (five or ten minutes will do it), toss with the remaining ingredients, and you’re ready to go.

There’s something about the combined flavors here—the sweetness of the corn, the acidity of the tomatoes and lemon juice, and the aromatic quality of the tarragon (which is always so good in the company of vinegar or lemon)—that makes this the perfect accompaniment for grilled steak, though the same argument could certainly be made for either chicken, or a meaty fish like salmon. Either way, it’s an easy, zippy salad to have in your summer cooking arsenal. I, for one, am glad to finally have it in mine.

On an unrelated note, many of you have been asking how Lily has been getting on—Lily, of course, being the new Lab-mix addition to our household discussed at length in last week’s posting. The short answer is fantastic!—she and Sid have hit it off and are constantly wrestling and playfully mouthing each other, and any anxiety she may have had about things like stairs, elevators, and car horns seems largely to have disappeared. And she’s recently discovered the comforts of our bed, which along with the sheepskin rug at the top of the stairs, has quickly become her favorite spot in the apartment. A few challenges remain, namely her tendency to go to the bathroom in her crate—due either to anxiety or the fact that for the first few years of her life this was status quo—but we’re getting there. And each day she seems happier and more at home! 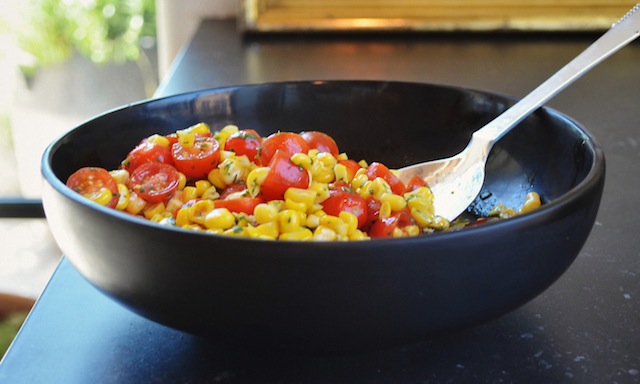 Directions:
—Heat 1 tablespoon of the oil in a 12-inch nonstick skillet over medium-high heat until shimmering. Add the corn and cook, stirring often, until softened, about 2 minutes.
—Transfer to a medium bowl to cool slightly. Add the halved or quartered cherry tomatoes, 2 tablespoons of the oil, the lemon juice, the tarragon, the kosher salt, and a few grinds of freshly ground black pepper. Toss and serve. 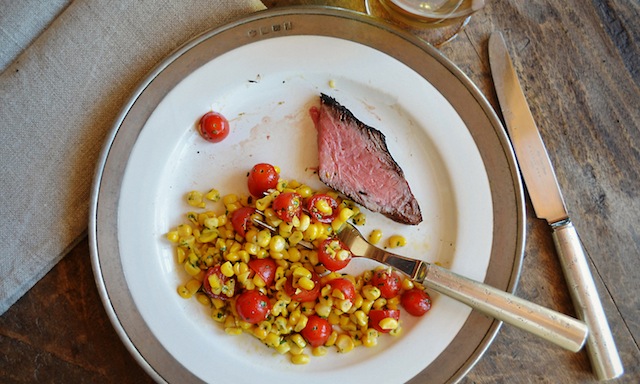