From the May, 2011 Bon Appetit (click here to view the recipe)

I’ve now spent about three weeks with the May issue of Bon Appetit and I’m happy to report that the new team there has breathed some much needed life into a publication that had grown a little stale. This is only their first complete issue so time will tell if it’s truly a sign of things to come, but after initially complaining to a fellow food lover that it didn’t offer enough variety and was too heavy on pastas (it’s a special issue on Italy) I’ve gone on to cook a wide range of items, including chicken and morels (a keeper), roast potatoes with chive pesto (just okay), several of those pasta dishes (spaghetti alle vongole; pasta with cherry tomatoes — both excellent), and the crostata pictured here (see comments below). And I’m still hoping to tackle their raw artichoke, celery, and Parmesan salad if I’m ever able to track down the pound of baby artichokes the recipe calls for. 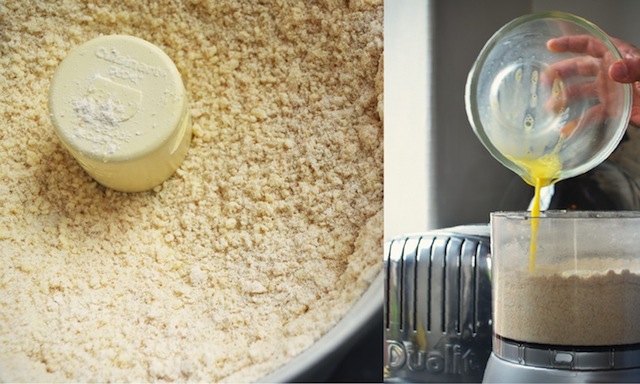 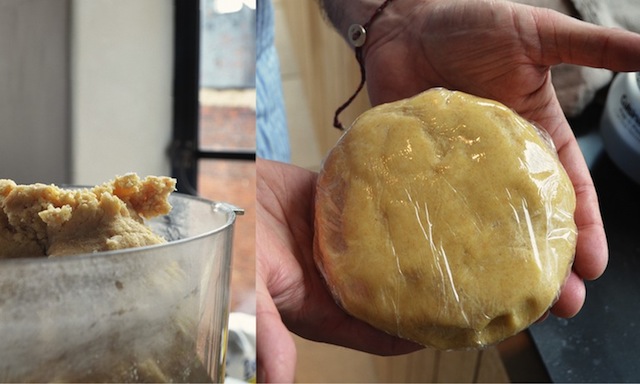 As for the aforementioned rhubarb and raspberry crostata, the accompanying photos make one thing abundantly clear — it’s a thing of beauty. That was largely my impetus for flagging the page in the first place, and is as good a reason as any to devote the time and money involved in whatever culinary enterprise may grab you. And “grab” is an apt word here, since even after I’d closed the magazine and moved on to other things I found that the image of the tart — its summery, ruby red fruit filling, its golden crust speckled with raw sugar — continued to haunt me. That’s a sure sign of a recipe you need to try, and one I didn’t fail to heed.

Perhaps too eagerly as it turned out, since I made the dough before discovering that my local market had run out of rhubarb, and that I’d run out of time to try elsewhere. So instead of the rhubarb I substituted a bag of frozen peaches, which I mixed with the 6-oz container of fresh raspberries the recipe also calls for. Problem not solved — frozen peaches invariably taste, well, frozen, with a kind of cloying, canned sweetness, and a texture that never quite matches the snap of the fresh variety. What’s more, I later realized that the ¼ cup of cornstarch called for in the recipe is there to hold together the rhubarb, which gets quite loose and juicy when cooked down. Without it, my crostata had taken on gelatinous sheen. Still, the cookie-like crust was a definite winner, and if I looked past the cornstarch glaze my crostata was almost appealing. I’d track down that missing rhubarb and try it again. 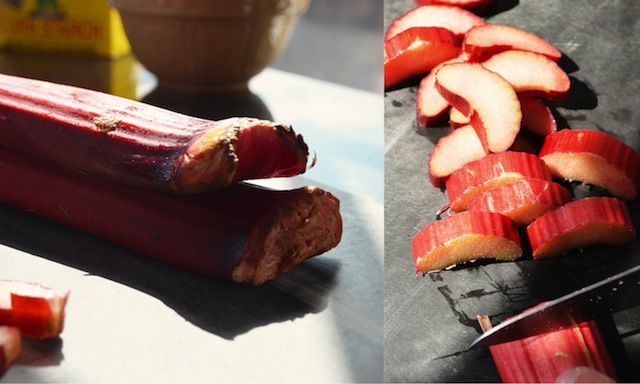 A week or so later I did just that (the results are pictured here). With all the ingredients in place, my crostata was as bright in flavor as it was on the plate — a veritable neon sign for warm weather. What’s more, with the proper fruit at last in play I could appreciate how well the tart mix of berries and rhubarb complimented the buttery nuttiness of the crust (this due to the addition of a ½ cup of whole wheat flour, which also gives the crust a moist tenderness, like a soft sugar cookie). A dollop of sweetened whipped cream — better than the ice cream shown here — and you have the perfect, easy, summer dessert. 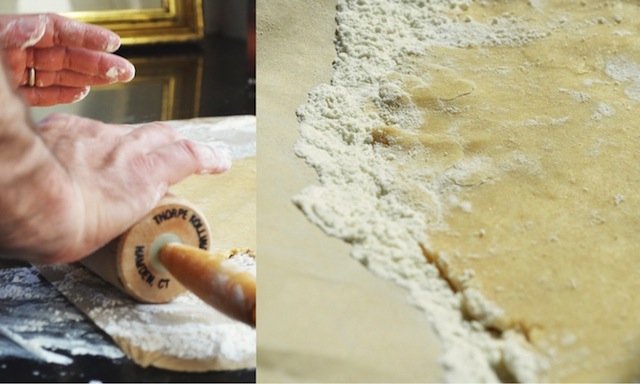 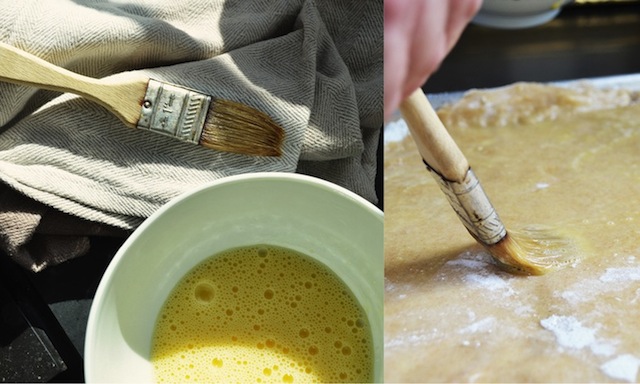 A few final thoughts on the preparation. Even with the addition of the cornstarch I found my berry/rhubarb mixture a little too wet to simply lay on top of the crust. This may vary according to your fruit and the cooking conditions, but be prepared to use a slotted spoon to separate some of the fruit from the juice, as I did. Also, rather than waiting to slide the pre-baked crostada onto a baking sheet after the fruit has been added as the recipe directs, I suggest sliding the crust onto the baking sheet before the assembly is complete, as it will minimize any damage to the crostada this potentially hazardous maneuver may cause. 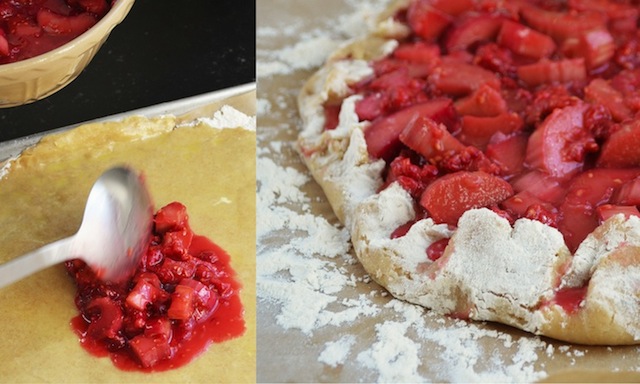 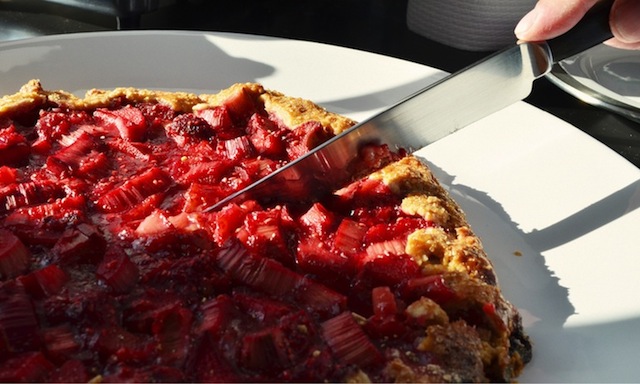 Directions for the crust:
—Combine both flours, sugar, and salt in a processor; blend for 5 seconds. Add butter; pulse until butter is reduced to pea-size pieces. Whisk egg and milk in a small bowl to blend; add to processor and pulse until moist clumps form. Gather dough into a ball; flatten into a disk. Wrap in plastic wrap; chill at least 1½ hours. (Note: Can be made 2 days ahead. Keep chilled).

TRG’s modified directions for the filling and assembly:
—Dissolve cornstarch in 3 tbs water in a small bowl; set aside. Combine rhubarb, raspberries, and sugar in a large heavy saucepan. Cook over medium heat, stirring often, until sugar dissolves and juices are released, about 4 minutes. Stir in cornstarch mixture and bring to a boil (rhubarb will not be tender and slices will still be intact). Transfer to a bowl. Chill until cool, about 30 minutes.
—Preheat oven to 400˚. Roll out dough on floured parchment paper to 12 inch round; brush with beaten egg. Gently lift parchment with dough onto a large rimmed baking sheet. Mound filling in center of crust; gently spread out, leaving 1½ inch border. Gently fold edges of dough over filling, pleating as needed. Brush border with egg; sprinkle with raw sugar. Bake until crust is golden brown and filling is bubbly, about 45 minutes.
—Let crostata cool on baking sheet on a rack. Transfer crostata to a platter, cut into wedges, and serve with whipped cream or ice cream. 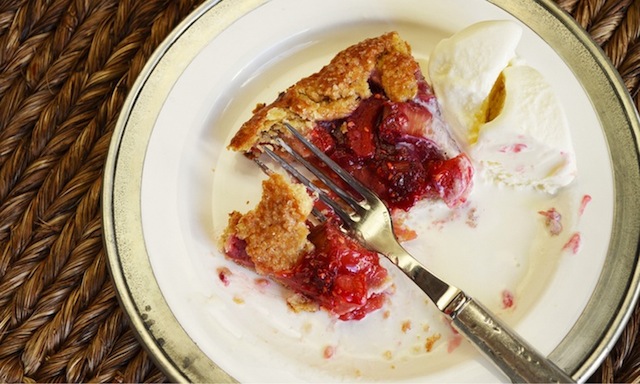