From the June/July, 2011 Fine Cooking (click here to view the recipe) 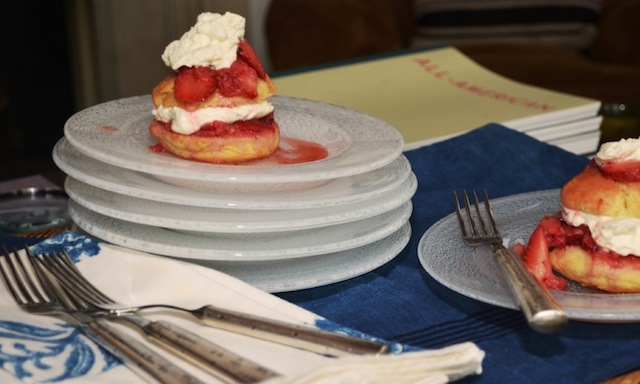 One of my summer dessert standards is something I call “cheater’s strawberry shortcake” — basically a good store bought pound cake (there’s a lemon glazed variety at Citarella that I like a lot for this), topped with macerated strawberries and whipped cream, sweetened with a little sugar and vanilla. It’s pretty good and a great fallback when you find yourself with an unexpected crowd for dinner (or if you simply don’t feel like spending a lot of time in the kitchen). Needless to say, however, it doesn’t come close to the pleasures of the real thing.

That said, until recently those pleasures were ones I’d only experienced when someone else had done the baking, as I’d never personally attempted making the full-fledged dessert myself. But when the June/July issue of Fine Cooking arrived in my mailbox, emblazoned with an image of their version of this all-American classic on the cover, I vowed it was time to try my hand at the genuine article. The recipe seemed manageable enough and, frankly, I couldn’t think of a more July 4th-appropriate (okay, July 5th) posting than this one. 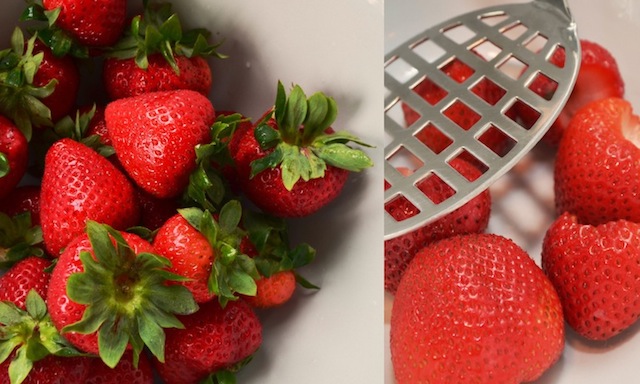 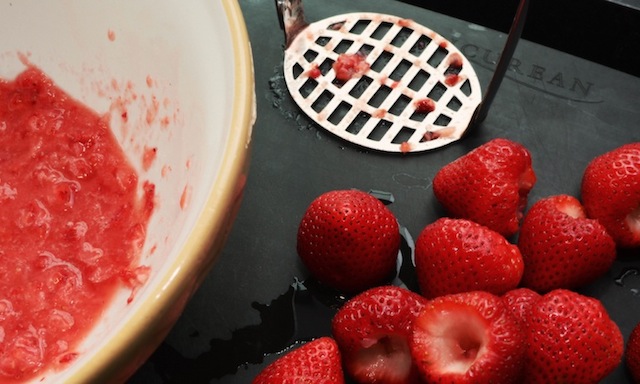 The Fine Cooking recipe actually comes from award-wining pastry chef Karen Baker, the author of Sweet Stuff: Karen Baker’s American Desserts and co-owner of Magnolia Grill in Durham, North Carolina. Based on my experience with her shortcake recipe, both deserve exploration, as the finished results were flaky, moist, and delicious — everything you hope for with good shortcake. The recipe also offered a number of (for me anyway) innovations that will be as useful in my cheater’s version as they are in her directions for the classic variety.

At the top of that list is the suggestion to crush a third of the berries with a potato masher before mixing them in with the remainder of the fruit, along with two tablespoons of granulated sugar — a tip that ensures the dessert will feature plenty of juice (the sugar will draw some out but nothing like what I ended up with, thanks to the mashing). Another useful bit of advice: chill a metal bowl before whipping the cream, as this will help it to come together more quickly. And if you decide to whip the cream in advance, the recipe suggests giving it a quick whirr with a hand-held mixer before serving — a time saver I will definitely make use of the next time I’m serving whipped cream. 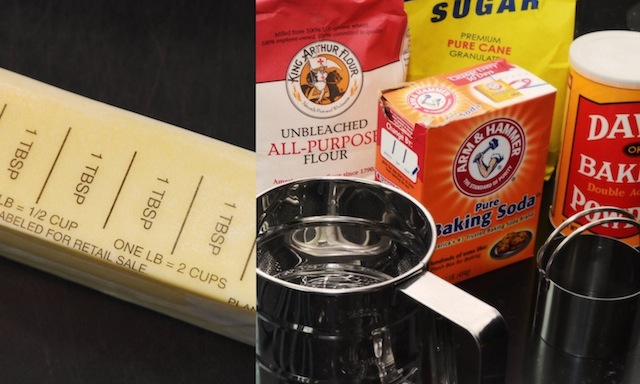 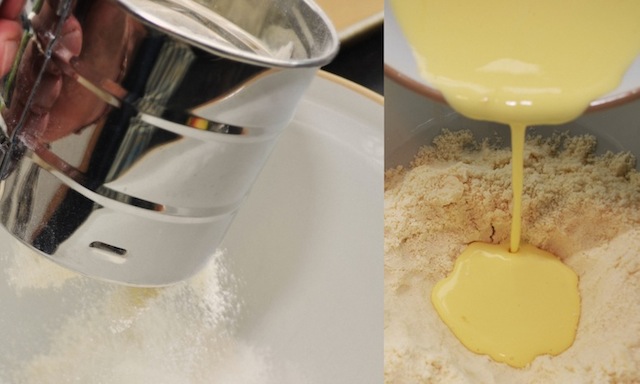 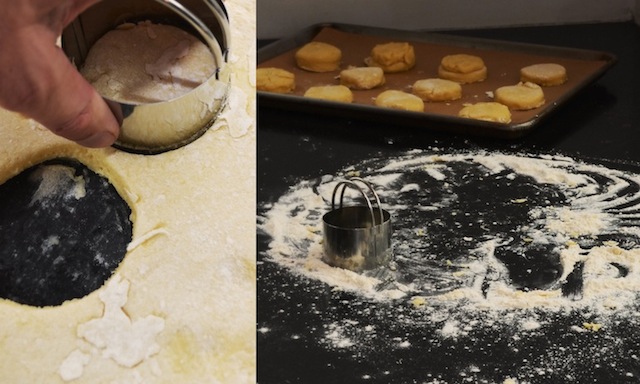 The only challenge I encountered making this recipe came when it was time to roll out the pastry, which is actually a sweetened biscuit dough that’s heavy on butter (an addition that makes it super tender). Maybe the day’s extreme humidity affected things, but despite lightly flouring the counter as instructed, instead of ending up with a ¾” disc of dough as I was supposed to, I found it clung to my rolling pin in one gloppy mass. After a number of tries and considerably more flour (on both the counter and the rolling pin itself) I was finally able to keep the dough from sticking to the roller. The next challenge was getting the dough to hold to the biscuit cutter so I could lay them on the cookie sheet for baking, something I was only able to do with the help of a spatula (I resisted taking this obvious step as the recipe advises a clean up-and-down motion with the cutter so that the sides of the biscuits don’t become sealed — something the magazine warns could impede rising). Even so, once baked the biscuits were perfectly airy and tender, with plenty of that desired height. And though I was careful to roll the dough out to the thickness suggested, I ended up with quite a few more biscuits than the six the recipe promises, so by increasing the amount of strawberries and cream, you may well find this dessert serves more than advertised.

Fine Cooking pointedly suggests serving the biscuits warm and assembling the cakes with the cream and berries just before serving. Still, I wondered how this would work a few hours after removing the cakes from the oven and decided to put this to the test. The result: disappointing, as the biscuits had lost all of their moisture and flakiness. So, unfortunately, this dessert is not a good candidate for making ahead of time.

The upshot: I’m not about to abandon my cheater’s version but I’m happy to have this recipe in my arsenal. It’s a winner, and definitely one I’m looking forward to making again. 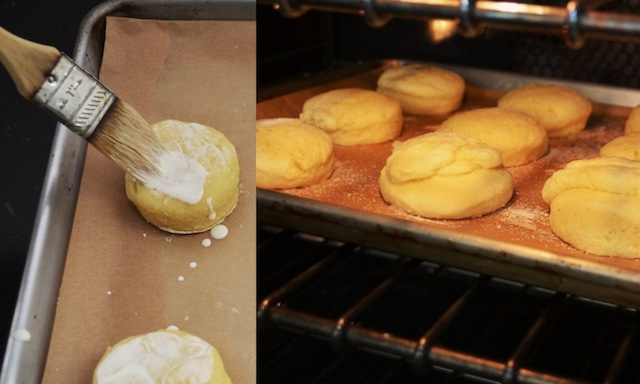 Directions for the filling:
—Put one-third of the berries in a medium bowl and, using a potato masher, crush them into a chunky purée. Slice the remaining berries 1/4-inch thick and stir them into the mashed berries along with the sugar. Taste the berries, adding more sugar if necessary. Let the berries sit at room temperature for at least 30 minutes.

Directions for the biscuits and assembly:
—Position a rack in the center of the oven and heat the oven to 425˚. Line a large heavy-duty baking sheet with parchment.
—Sift the flour, 1/3 cup of the sugar, the baking powder, and the baking soda into a large bowl. Stir in the salt. Using a pastry blender, a fork, or your fingertips, work the butter into the dry ingredients until the mixture resembles coarse cornmeal.
—In a small bowl, beat the egg and heavy cream with a fork. Mix in the buttermilk. Make a well in the center of the flour mixture and pour in the cream mixture. Mix with the fork until the dough is evenly moistened and just comes together (it will still look a little shaggy). Gather the dough and gently knead it three or four times. If the dough seems dry and doesn’t form a cohesive mass, work in more cream, 1 tsp at a time.
—Transfer the dough to a lightly floured surface and roll it into a 3/4-inch-thick disk. With a sharp 2½-inch biscuit cutter, press straight down to cut the dough into rounds and lift straight up to remove (don’t twist the cutter or it will seal the sides of the biscuits and interfere with rising). Transfer the rounds to the prepared baking sheet. Gather the dough scraps, gently knead them together, re-roll, and cut out more biscuits until you have a total of six.
—Lightly brush the biscuit tops with cream (about 1 tbs) and sprinkle with the remaining 1 tbs sugar. Bake, rotating the baking sheet once, until the biscuit tops are lightly browned, 10 to 15 minutes. Let the biscuits cool slightly while you whip the cream.
—In a large, chilled metal bowl, whip the heavy cream and sugar to soft peaks with an electric hand mixer. (Use immediately or refrigerate, covered until ready to serve.)
—Using a serrated knife, split the warm biscuits in half horizontally and transfer the bottoms to six dessert plates. Spoon about three-quarters of the macerated berries and their juice evenly over the biscuit bottoms. Top with a generous dollop of whipped cream and cover each with a biscuit top. Spoon the remaining berries and cream over each shortcake and serve immediately. 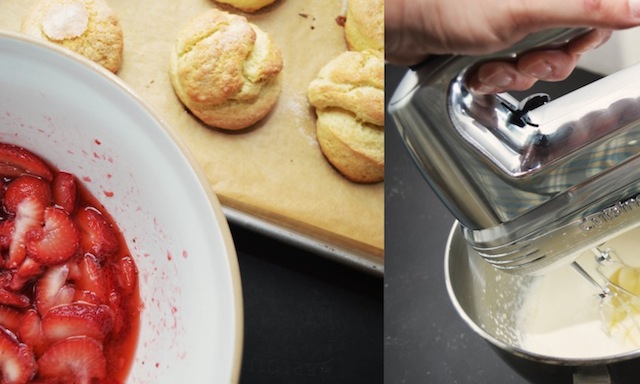 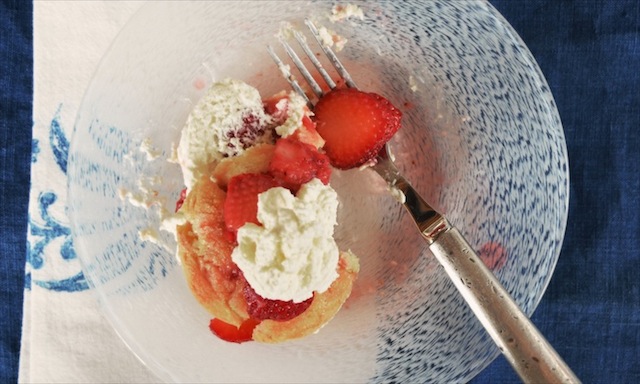