From America’s Test Kitchen (click here to view the recipe)

As you might have guessed from the title, this posting was intended to serve as my contribution to your Super Bowl Sunday, which, of course, has long since come and gone. I confess I got a little jammed up in my planning, plus I wasn’t happy with the photos and felt compelled to do a reshoot. So here’s my recipe recommendation for the big game, a little late in the game as it were. I figured (hoped) you’d forgive me for this lapse in scheduling, if only because a really good bowl of chili is welcome any time of the year and doesn’t require a major sporting event to be appreciated (and for those who disagree, there’s always next year’s Super Bowl… Go Jets?). Either way, it’s a recipe worth keeping handy, both because the end result is pretty wonderful, and because the path to getting there is blessedly easy. 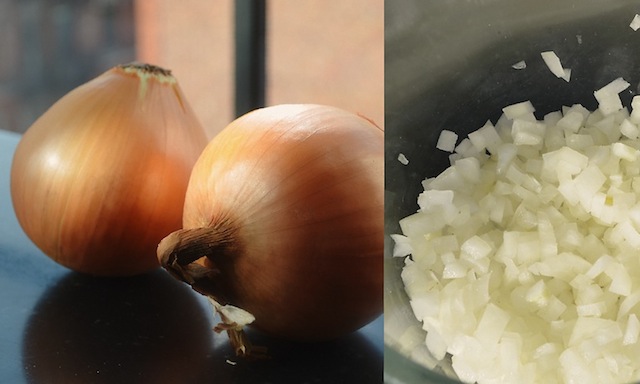 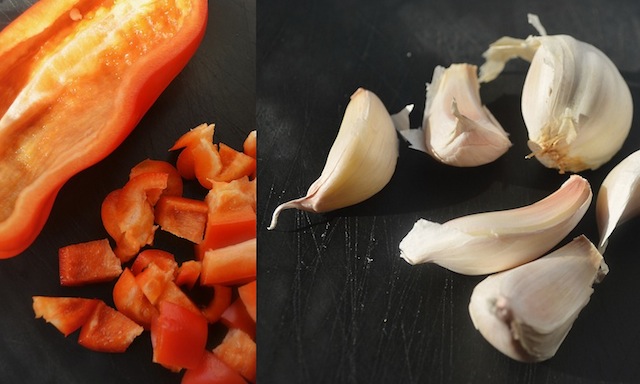 However, having now written that word “easy” for what seems like the one-hundredth time, before going further I feel I need to clarify that speed and simplicity are not necessarily the barometers by which I decide whether a recipe is worthy of your time and attention. How it tastes is way more important. That said, like many of you, cooking for me is something that often gets sandwiched between various other activities, so if I can identify a recipe that delivers on the flavor front while requiring a minimum of time in the kitchen, all the better. It’s one reason why I’m a fan of America’s Test Kitchen (the source of this recipe). Aside from working over a recipe with CSI-like efficiency to ensure it delivers on all fronts, they recognize that no matter how enthusiastic we may be about food and cooking, time is limited for most of us. As a result they have no qualms about devising shortcuts or in working with basic ingredients easily sourced at the supermarket, as long as the end result is a happy one.

That’s certainly the case here. For starters the recipe calls for the sorts of store bought items (canned kidney beans, commercial chili powder) that can shave hours off cooking time, even as they risk raising eyebrows among certain food purists. I can appreciate that and am all for cooking up your own pot of beans when time allows, but when it doesn’t and the goal is simply to get something healthy and great-tasting on the table, it’s nice to know there’s a compelling alternative. That’s especially true when the recipe takes steps to ensure that such time saving moves do not come at the expense of flavor — an ATK trademark and again one they call into play with this recipe. 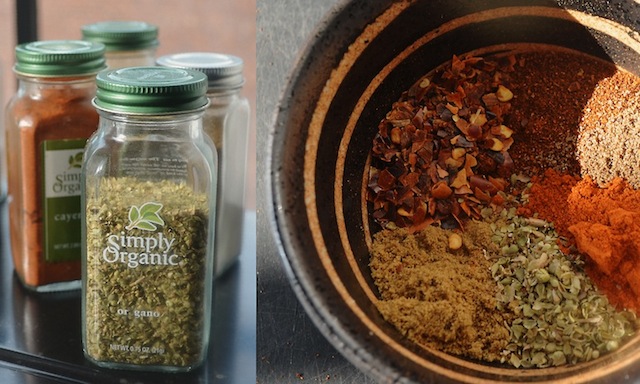 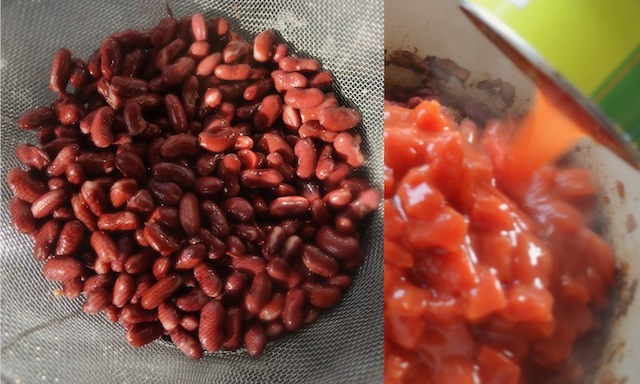 To that end, right at the start a large quantity of chili powder and other spices are thrown into the pot along with the onion, pepper, garlic, and vegetable oil to build the most flavorful base possible. (The fragrant bloom of cumin and chili powder that immediately overtakes your kitchen confirms you’re on the right track.) And the mix of diced tomatoes with the tomato puree achieves the ideal balance of texture and acidity, the latter of which is key to rounding out the flavors of the beans and the ground beef. What’s more, with their suggestion to keep the chili covered for the first hour of its two-hour simmering time, ATK ensures that the final product won’t just be rich and flavorful, but that it will have the thick consistency we associate with this dish at its best. (Cooking times vary, of course, but for what it’s worth I did not need to introduce the 1/2 cup of water ATK suggests adding if the chili starts to stick to the bottom of the pot).

As made with the instructions below, the chili packs a nice amount of heat — not enough to make you sweat, but pleasantly pronounced all the same. Still, if you like things a little spicier, you can always dial things up a bit by increasing the dried red pepper from a single teaspoon to two, or even more. Either way, the recipe’s suggestion to squeeze a slice of lime over each serving is a good one and functions less as a flame retardant than as a bright counterpoint to the chili’s deep flavoring. It’s an add-on I’d never considered before and one that will now be a standard at my house. Along with a sprinkling of chopped cilantro and red onion, as well as a little shredded cheese, the combination of flavors is such that you’ll likely end up eating more than you intended. Try to put aside a little of it though — the chili’s even better a few days later. 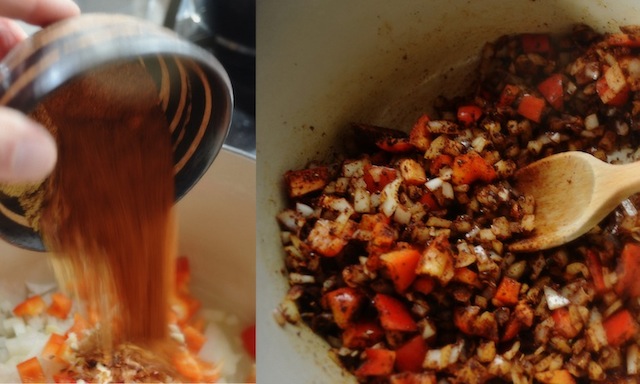 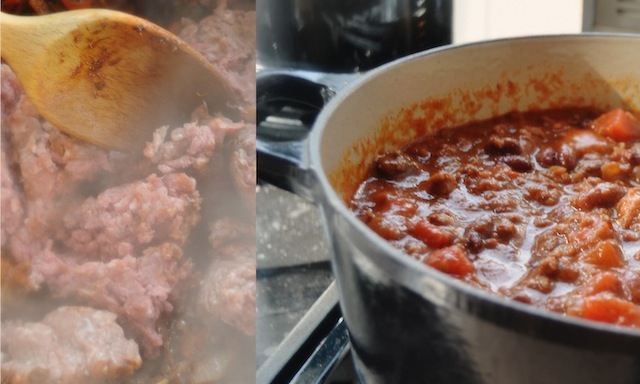 Directions:
—Heat oil in a large heavy-bottomed nonreactive Dutch oven over medium heat until shimmering but not smoking, 3 to 4 minutes. Add onions, bell pepper, garlic, chili powder, cumin, coriander, pepper flakes, oregano, and cayenne; cook, stirring occasionally, until vegetables are softened and beginning to brown, about 10 minutes. Increase heat to medium-high and add half the beef; cook, breaking up pieces with wooden spoon, until no longer pink and just beginning to brown, 3 to 4 minutes. Add remaining beef and repeat the previous step (i.e. cook, breaking up pieces with wooden spoon, until no longer pink).
—Add beans, tomatoes, tomato puree, and ½ tsp salt; bring to a boil, then reduce heat to low and simmer, covered, stirring occasionally, for 1 hour. Remove cover and continue to simmer 1 hour longer, stirring occasionally (if chili begins to stick to bottom of pot, stir in ½ cup of water and continue to simmer), until beef is tender and chili is dark, rich, and slightly thickened. Adjust seasoning with additional salt. Serve with lime wedges and condiments, if desired. 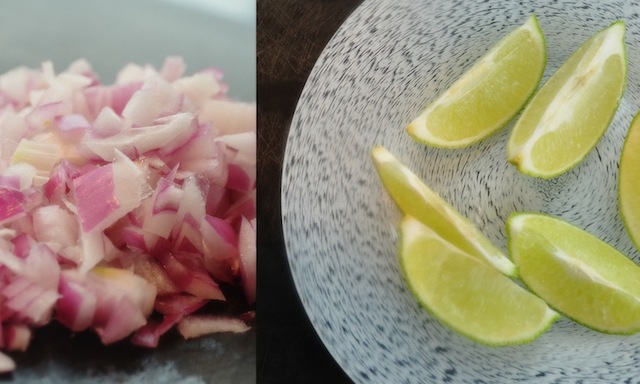 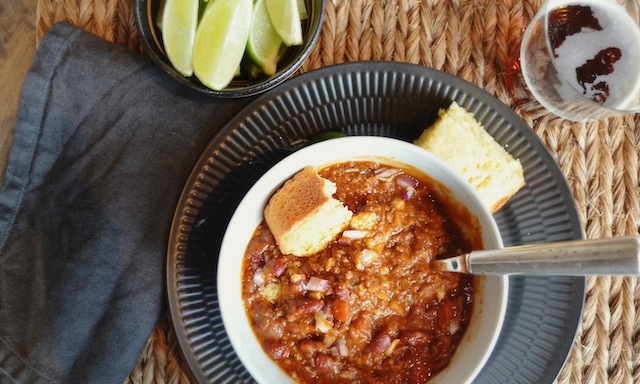