From the July, 2011 Martha Stewart Living (click here to view the recipe) 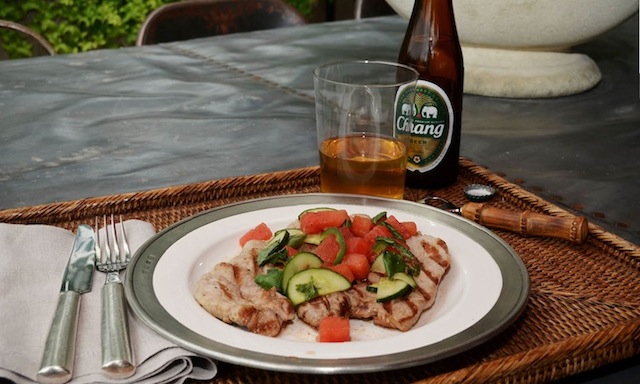 I’ve never been much of a watermelon fan. This seems like an almost un-American thing to reveal, like sharing that you once burnt the flag in college or something, but there you have it. As a kid, the fastest way to end my enthusiasm at a cookout was to present a platter of watermelon, and it’s a sentiment I’ve carried with me into adulthood. Watermelon was what you got when your mom didn’t have time to make cookies, or cake, or to stock the freezer with ice cream sandwiches. I mean if there wasn’t the promise of something featuring processed sugar to follow, what was the point? As far as I was concerned there was only one reason to eat watermelon, and that was to get to the good stuff. The stuff they were holding back.

But a few years ago I started noticing something interesting — watermelon was showing up on the menus of some of my favorite restaurants in ways that even I found irresistible. Like this salad, which is made with feta cheese, tomatoes, and cubes of watermelon, all of it sprinkled with fresh mint and doused with red wine vinegar. Call it my watershed watermelon moment: here was an approach to the fruit that transformed it into something exciting, something I’d want to eat all for itself and not just for the promise of what might follow. And the kicker was that the very qualities that I’d found so dull in the sliced variety — its high water content, its diluted sweetness — were the things that made it work so well with the salty, or the acidic, or the spicy. In other words, the stuff I really love. The stuff I’ve never been able to get enough of. 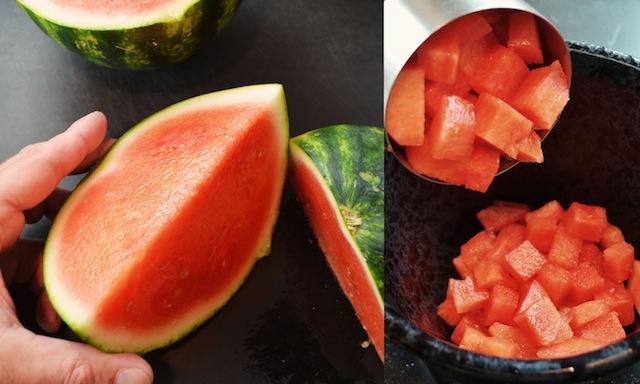 So as summer approached (and then put its feet up) I kept my eyes peeled for recipes that would allow me to create at home the sorts of watermelon-based recipes I’d been enjoying at various establishments around town. Which is how I came to this Thai-inspired recipe for grilled pork cutlets topped with a watermelon and cucumber salad. It’s a summery approach to pork, and one that offers an interesting twist on watermelon, thanks to the presence of jalapeno, basil, and nam pla, otherwise known as Asian fish sauce.

I’m not certain how frequently watermelon makes an appearance in authentic Asian cuisine (I’d guess never, though don’t quote me on that), but on the exceptionally humid day I prepared this dish I might as well have been sitting at a beachside café in Koh Samui, and not just because of the moisture in the air. The lime, the jalapeno, and the fish sauce all combined to add a welcome piquant note to the mildness of the cutlet and the sweetness of the fruit, while the sliced cucumber added a cool component — all qualities that struck me as being pretty true to classic Thai cooking. What’s more, assembling the dish couldn’t have been easier — the salad is the most time consuming step, and for that all you need to do is toss some cubed watermelon (one of those baby seedless varieties will give you more than enough to work with) with slices of cucumber and jalapeno, then mix it with the basil, the fish sauce, the lime juice, and a bit of chopped coriander. Simple, right? 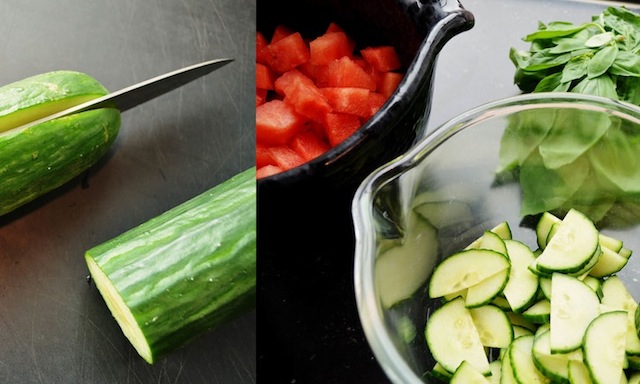 That said, I tend to like my food with more of a kick than this recipe prescribes, and so ended up doubling the amount of lime juice called for here. Depending on your preferences, you might want to do the same, or even to increase the amount of jalapeno slightly (say, from one chile to one-and-a-half). These adjustments are easy enough to make at the end, though, so let your taste buds be your guide.

Also, while the recipe calls for cooking the cutlets on a gas grill, I didn’t have access to one when I tackled this recipe and so decided to try it with a grill pan instead. It’s a reasonable alternative, though I did miss the slightly smoky flavor I would have had had I cooked over an open flame (I also could have done without all the smoke the pan released, though this was likely due to my heavy hand with the olive oil you’re only meant to drizzle over the cutlets before cooking). Still, I did manage to get those all-important grill marks on the paillards, which at least made them look pretty on the plate. And the flavor was good — better than good even, with the olive oil and the bit of Kosher salt also sprinkled pre-cooking giving the mild taste of the pork just the nudge it needed.

The star here, though, is undeniably the watermelon salad, so with or without a grill — or even without the cutlets — it’s worth keeping in your bag of tricks. In fact, I’m thinking it would work just as well piled on top of a meaty fish, like swordfish, or tuna steaks, or even on sliced steak for that matter. Which gives me an idea for dinner this weekend . . . See what happens when you start eating watermelon?

Directions:
—Heat grill to high. Toss together the watermelon, cucumber, jalapeno, basil, fish sauce, coriander seeds, and lime juice in a bowl.
—Drizzle pork cutlets with olive oil, and season with ¼ teaspoon salt. Grill until grill marks appear and pork is cooked through, about 1 minute per side. Top pork with watermelon salad. 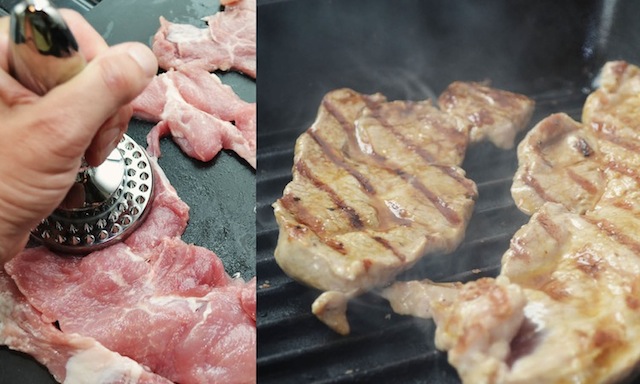 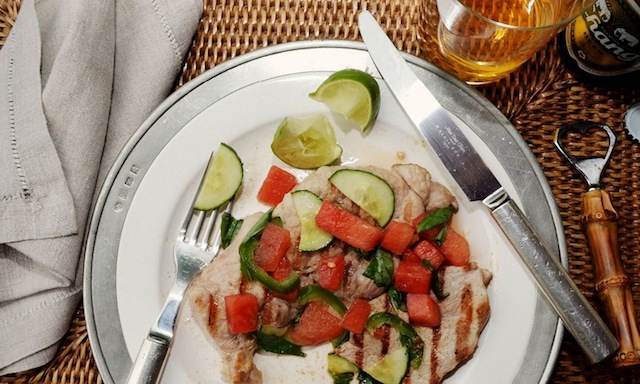