From the July, 2011 Martha Stewart Living (click here to view the recipe)

One of the benefits of obsessively flipping through the various cooking magazines each month is that from time to time you land on a dish you know will end up in regular rotation on your dinner table. Such is the case with the cherry tomato cobbler pictured here, from the July issue of Martha Stewart Living.

This is a dish that practically screams “summertime!” In fact, it’s part of a larger summer cooking story in the issue called “New American all-Stars,” which features a number of warm-weather winners including a fried chicken and bitter greens salad, as well as a grilled pizza with peaches and prosciutto. The cobbler recipe isn’t online yet so I’m reprinting it for you here (at least until it shows up on the MSL website, at which point I’ll offer the link instead), though for the various reasons and recipes mentioned above, this is probably an issue of the magazine worth investing in.

So what appealed to me about this dish? For starters there’s the fact that it stars cherry tomatoes, which are abundant and sweet at the moment and have been on magnificent display in the produce department at my local Whole Foods, as well as at my neighborhood farmer’s market. But I also loved the spin on the cobbler idea, swapping out the traditional sweet fruit filling for a savory one, amplified here with the addition of caramelized onions, garlic, and a dash of hot pepper flakes. And it doesn’t hurt that in this recipe the biscuit topping is crowned with a sprinkling of Gruyere cheese, which turns a beautiful golden brown when baked. I mean cheese, biscuits and tomatoes — how can you do better? 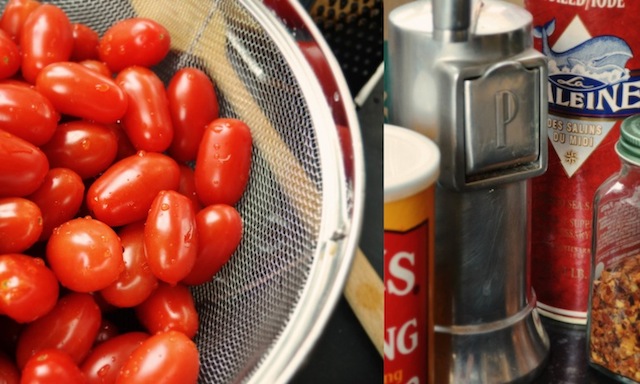 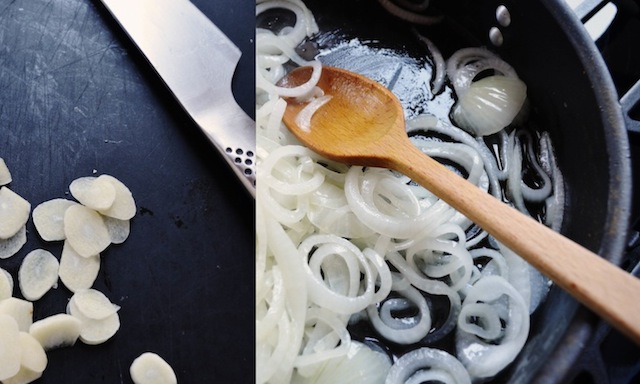 Although the magazine suggests this dish as either a main course or as an accompaniment, I’d have to argue for it in the latter role. As much as I liked it, given the density of the biscuit topping it’s just too much on its own. Instead, I served it alongside some sliced steak (because steak and fresh tomatoes are a killer combo in warm weather), as well as an arugula salad splashed with a little olive oil and lemon juice to cut the richness of the meal. Together it made a wonderful summer dinner.

A few notes on the recipe: although MSL calls for 3 pounds of cherry tomatoes, on the day I went food shopping I could only locate the grape variety. These worked just as well, though the classic round variety called for here would probably have looked that much better. Also, either because of this switch, or because I happened to score particularly juicy tomatoes, about half-way through the cooking time I noticed a lot of juice splashing out of the baking dish and into the oven. So keep an eye on things as you bake, and, if necessary, slide a cookie sheet under your casserole (or be prepared to devote some serious scouring time later).

Also, when it comes to adding the biscuit dough to the tomatoes, MSL suggests using a ½ cup measure. For what it’s worth, this measurement brought me up short on the seventh and final biscuit so I suggest only partially filling the measuring cup, then adding to the biscuits if you find you have extra.

Lastly, although MSL doesn’t specify, when placing the cobbler in the oven, be sure to position it a good distance from the heat source (midway in the oven, or slightly lower) — too close and you risk the tops of the biscuits going brown before the interior is able to fully firm up. Of course, temperatures and cooking times can vary so it’s best to keep an eye on things throughout the suggested 70-minute cooking time. 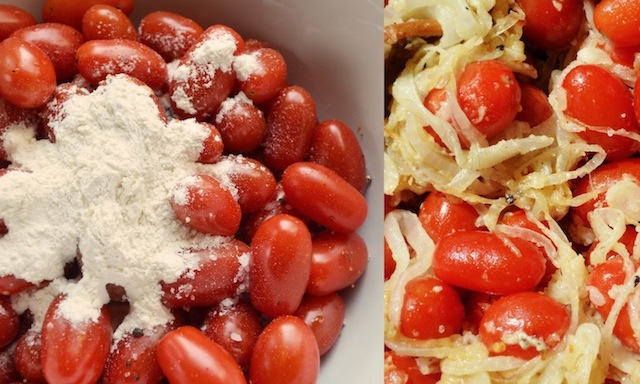 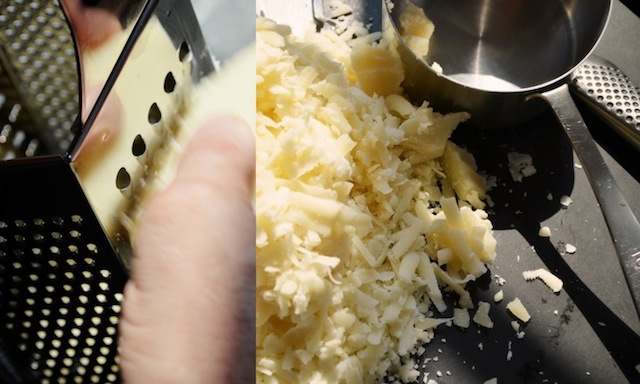 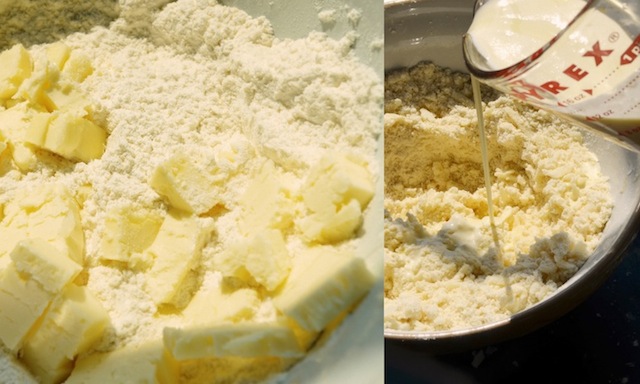 Directions for the filling:
—Heat oil in a large high-sided skillet over medium heat. Cook onions, stirring occasionally, until caramelized, about 25 minutes. Add garlic, and cook until fragrant, about 3 minutes. Let cool.
—Toss onion mixture, tomatoes, flour, and red pepper flakes with 1½ teaspoons salt and some pepper.
—Preheat oven to 375˚.

Directions for the biscuit topping:
—Whisk together flour, baking powder, and 1 teaspoon salt in a bowl. Cut in butter with a pastry cutter or rub in with your fingers until small clumps form. Stir in cheese, then add cream, stirring with a fork to combine until dough forms (dough with be slightly sticky).

Directions for assembly and baking:
—Transfer tomato mixture to a 2-quart baking dish (2 inches deep).
—Spoon 7 clumps of biscuit dough (about ½ cup each) over top in a circle, leaving center open.
—Brush dough with cream, and sprinkle with remaining tablespoon cheese.
—Bake until tomatoes are bubbling in the center and biscuits are golden brown, about 1 hour and 10 minutes. Transfer to a wire rack. Let cool 20 minutes. 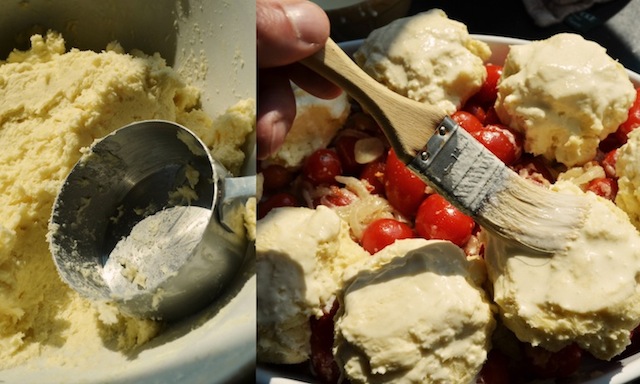 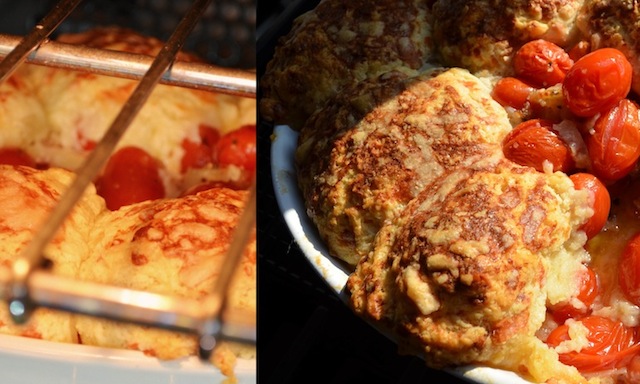 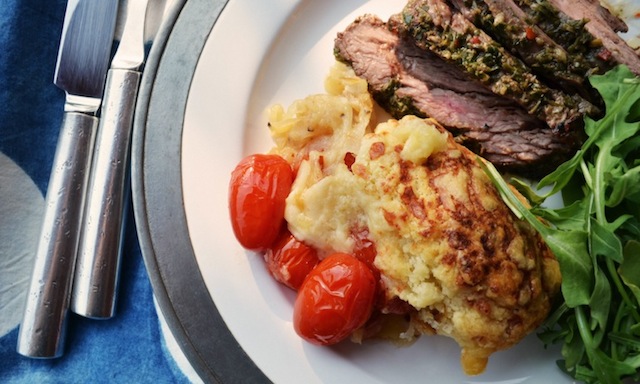