From the March, 2010 Elle Decor (click here to view the recipe) 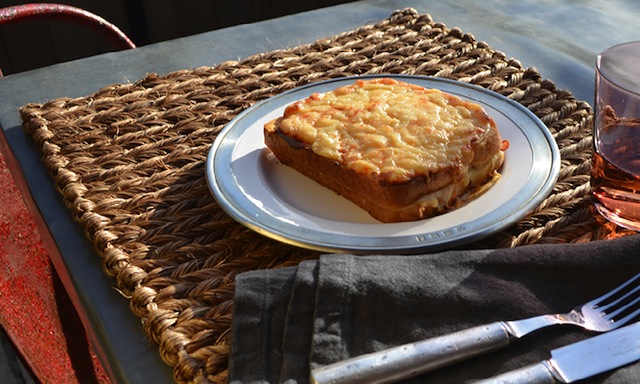 One of my regular recipe stops over the past few years has been Elle Décor and the “Daniel’s Dish” column — a monthly recipe (and accompanying essay) presented by celebrity chef Daniel Boulud. Maybe it’s because I have a weakness for French/Mediterranean cooking, but Boulud’s recipes consistently strike a chord for me. Of the five or six I’ve tried, all have been winners. What’s more, all have proved relatively simple to prepare. That’s certainly true of this recipe for a croque monsieur (and its sister dish, the croque madame, which features the addition of a fried egg), from the March, 2010 edition of Elle Decor. 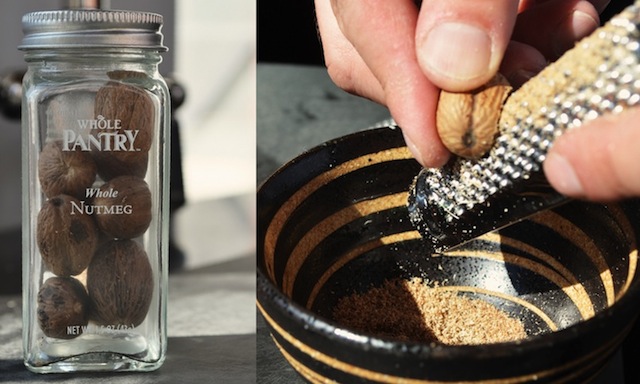 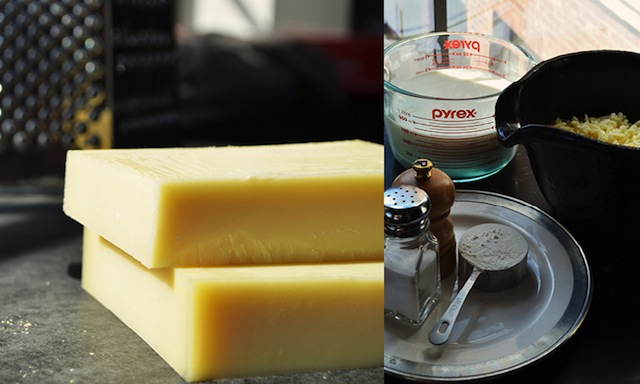 I was introduced to the croque when I was sixteen, on my first trip to France — a journey I took with a group of other high school students. It was lunchtime on the day of our arrival, and after dropping our bags at the youth hostel where we’d be staying we were taken for lunch to a large café near the Eiffel Tower. One of our leaders helpfully suggested we try the croque monsieur, which he promised was similar to a grilled ham-and-cheese. Maybe everything else on the menu simply sounded too foreign to us on that first day, but a short time later a large tray of croques emerged from the kitchen, along with a few bright yellow omelets. I can’t speak for the others, but the memory of that first taste of real French cooking has stayed with me all these years — the wonderful saltiness of the ham and melted gruyere complimenting the toasted milkiness of the bechemal sauce, itself slathered across grilled white bread that was unlike anything I’d tasted before. If this was France’s answer to the grilled cheese sandwich, then I couldn’t wait to sample the exciting stuff. 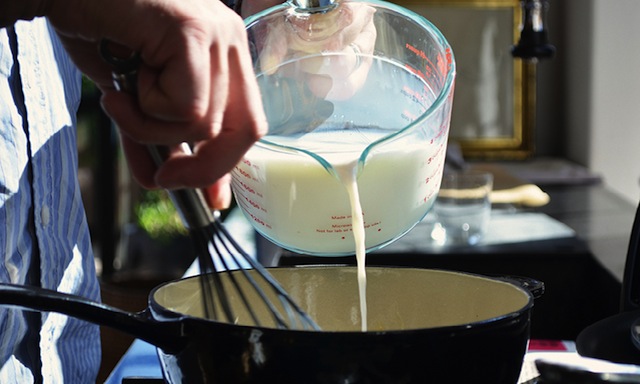 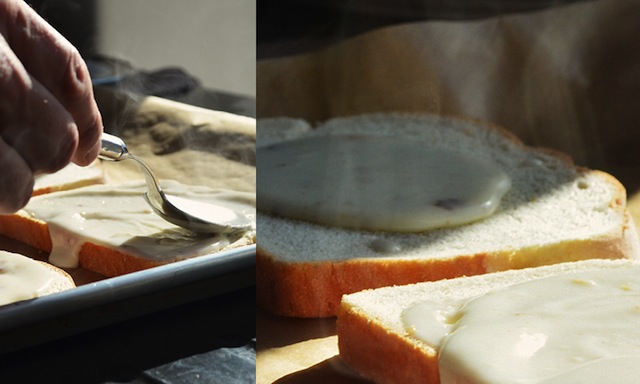 Over the years I’ve done plenty of that without ever losing my affection for this simple, melted ham-and-cheese sandwich. Yet because it’s something I associate with Paris it has somehow seemed out of reach in my own New York City kitchen — as though its very French-ness carried a warning label that said “don’t-try-this-at-home.” One of the things I love about Boulud’s recipe is that it takes the air out of this fantasy. The croque monsieur may be French, but it is supremely easy to prepare (though preparing the all-important bechemal sauce does require 15 minutes or so of near constant stirring).

Boulud, however, does offer a warning of sorts and it’s this: Because the croque is so simple to make, it’s crucial that the ingredients be of the best quality. For the meat, he suggests something called Jambon de Paris (or Parisian ham), an excellent Guyere cheese, and for the bread a Pullman loaf. While I couldn’t locate either the ham or the bread he suggests at my local market, I did find that cooked Virginia ham (as opposed to cured), and a good quality slice white bread, worked just fine as well. Also, for four sandwiches Boulud specifies 12 oz. of thinly sliced ham and 10 oz. of Gruyere cheese. In case you don’t have your conversion app handy, that’s .75 lbs and .625 lbs respectively.

One word of caution: when laying the grated cheese on top of the sandwich (that’s right, in a croque the cheese goes on top of the bread and not inside it) it’s important to distribute it evenly. If not, you’ll find it takes longer for this all-important element to achieve the bubbling brown exterior that will tell you it’s time to eat. I miscalculated here and cooking stretched well beyond the promised fifteen minutes (to more like thirty). Still, when it was time to take my knife and fork in hand I couldn’t have been happier — all of the rich, salty goodness of this classic French dish, and out of my own all-American kitchen. 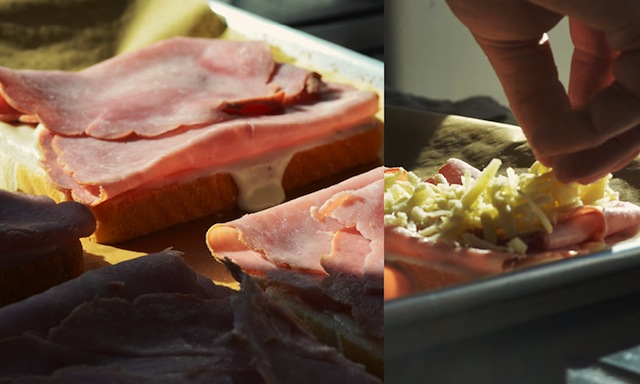 Directions:
—In a small saucepan over low heat, melt butter and whisk in the flour until blended but not colored. Gradually whisk in the milk and cook, stirring constantly, until thickened, about 10 minutes. Season to taste with nutmeg, salt, and pepper. Set aside. (Note: This may be made up to 24 hours ahead and refrigerated with a layer of plastic wrap placed directly on the surface; gently reheat before serving.)
—Preheat oven to 400˚. Place bread slices in a single layer and spread each evenly to the edges with béchamel (all the sauce may not be needed). Divide ham among four of the slices, trimming if necessary so it is within 1/4 inch of the bread’s edges. Top all eight slices with equal amounts of the grated cheese, spreading evenly to within 1/4 inch of the edges.
—Place the four bread slices with béchamel and Gruyere, cheese side up, on top of slices layered with ham. Transfer sandwiches to a sheet pan lined with parchment paper. Bake until cheese topping is melted and golden brown, 10 to 15 minutes.
—To make a croque-madame, fry eggs sunny-side up and place one on top of each finished sandwich. Sprinkle with salt and pepper and serve immediately. 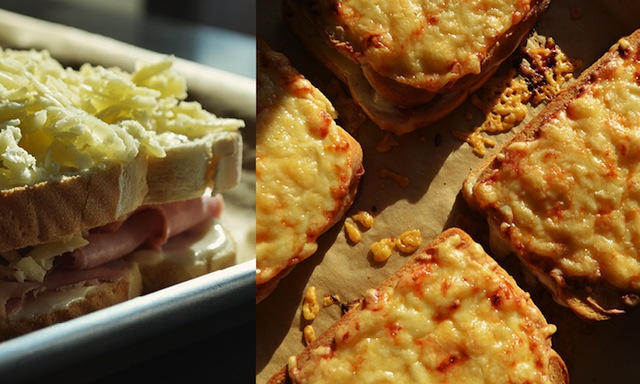 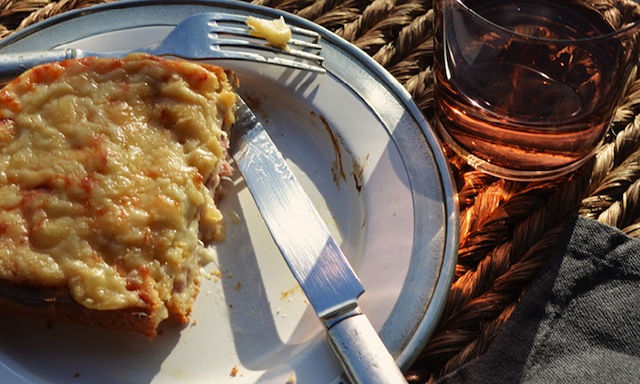