From the April, 2006 Gourmet (click here for the recipe) 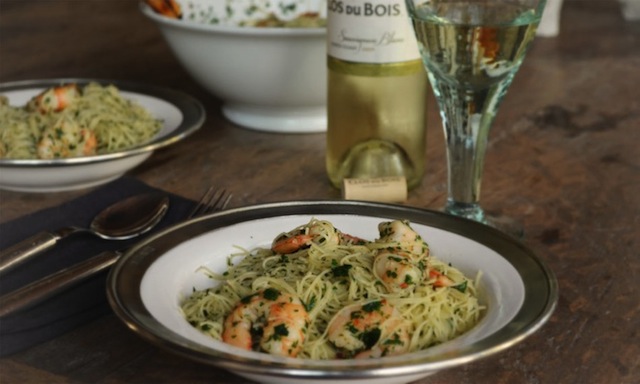 I seem to be eating a lot of spaghetti these days, and when I’m not eating it I’m thinking about it. For a long time I only ever thought about it and never ate it, as once upon a time I subscribed to a strict no-carbs policy. I’m glad those days are behind me, but even though I now eat bagels, baguettes, potatoes, muffins, gnocchi, and pizza with abandon (I do follow an only-on-weekends rule where cookies are concerned, unless I made them myself in which case all bets are off), there’s invariably a moment before I take that first bite where I ask myself, “should I . . . ?” The answer is almost always “yes,” especially since starting this project, which has given me license to cook, and to eat, all sorts of good things I might never have allowed myself. Which probably explains why I can’t get spaghetti out of my head.

So I guess what I’m trying to say is that you’re helping me to assuage my guilt. For that I thank you, and in exchange I offer one of my all-time favorites — a bowlful of garlicky, buttery angel-hair pasta, dotted with a generous quantity of equally garlicky, buttery shrimp, all of it infused with the seductive flavors of olive oil, white wine, and just a hint of red-pepper flakes. We’re talking shrimp scampi here, of course, that classic of Italian-American cooking and a favored dish at so many red sauce establishments. In other words, this is a good trade. 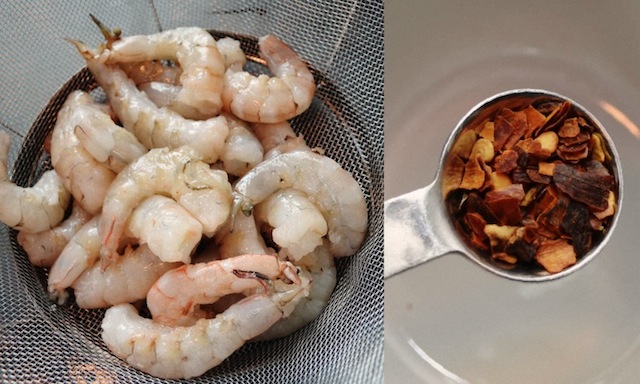 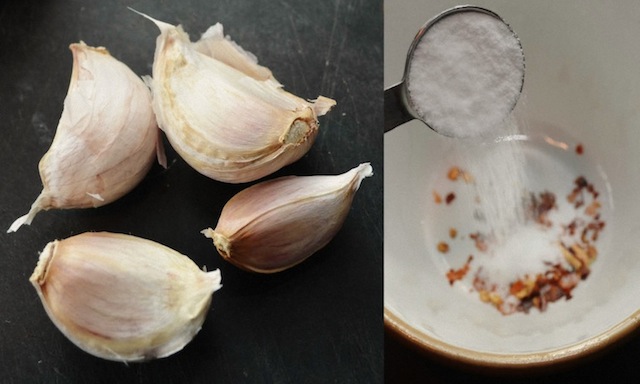 This particular interpretation comes from the April, 2006 edition of Gourmet (R.I.P.), when the magazine was headed up by the illustrious Ruth Reichl, and when each issue would present me with at least a half dozen recipes that I had to try, urgently. Today those recipes fill two thick binders in my kitchen, though few are as dog-eared as this one. Funny, but I’m not even sure I knew what shrimp scampi was when I came across the recipe. I certainly knew the name of the dish and had probably even eaten it, but prior to landing on this version I doubt I could have told you how it was made or what ingredients it featured. All I knew was that it was going to be dinner, and soon.

I was curious, though: why “scampi?” Was this a variety of shrimp I wasn’t familiar with? A particular method of cooking seafood that features copious amounts of garlic? The name of a once illustrious Italian-American chef now lost to time? In fact, a little Internet digging (thank you Melissa Clark) revealed that scampi are tiny lobster-like crustaceans sometimes called langoustines, and that one cooking method popular among cooks in Italy is to sauté them in garlic, onion, olive oil, and white wine — in other words, a similar approach to the one used in making our American shrimp scampi. Apparently Italian cooks newly immigrated to the U.S. simply substituted scampi for the more readily available shrimp while retaining both names, thus giving life to the dish we now know as shrimp scampi. (And this concludes the historical portion of today’s posting). 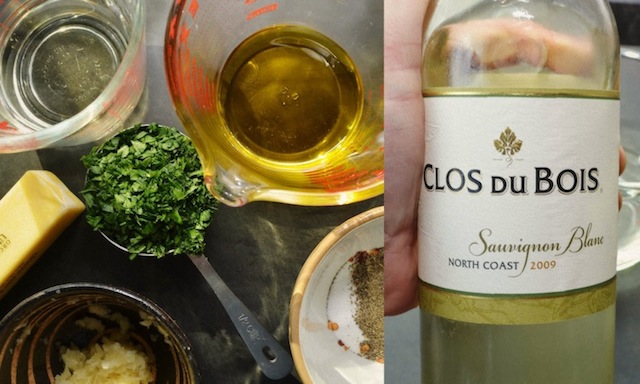 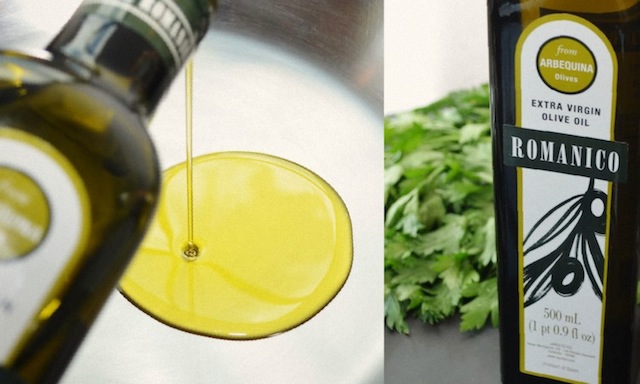 Like so many creations born of home cooks’ ingenuity, shrimp scampi has lots of variations — it doesn’t always feature pasta, and often includes ingredients such as tomatoes, breadcrumbs, onions, and assorted herbs. Aside from the aforementioned capellini, the version presented here features none of those. In fact, what I liked about it was that it called into play relatively few ingredients, and that those that were used would create the kind of dish I was jonesing for — rich, a little decadent, and with enough garlic to ward off a family of vampires (four large cloves, so we’re talking serious protection here). I mean, who needs breadcrumbs or tarragon? Here was a scampi for purists!

That said, with just a handful of key players I knew I wanted to use the best quality ingredients I could find, which includes the shrimp (of course), but also the white wine and the olive oil. The recipe calls for just a ½ cup of dry white wine, so I cooked with a decent bottle and downed the rest with dinner. As for the olive oil, I used a Spanish variety called Romanico made from Arbequino olives. This had just the clean, peppery kick required to offset the acidity of the wine and the richness of the other ingredients (it’s also great as a dip for bread). It all worked beautifully — so beautifully, in fact, that a recipe meant to serve four only fed two of us, but then we’re greedy eaters. 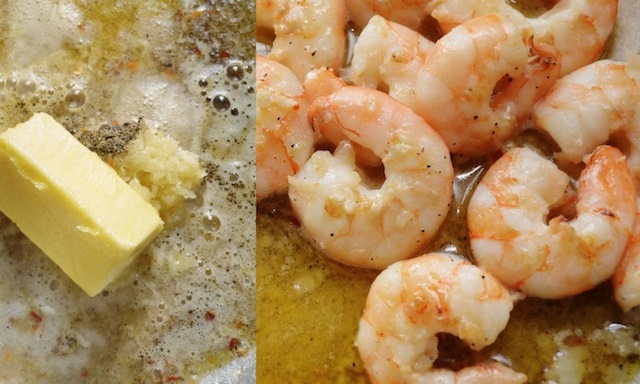 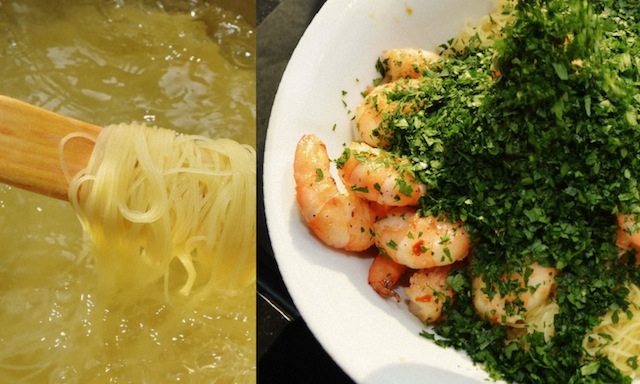 One final note about the shrimp: the recipe calls for deveining, which is the most labor-intensive aspect of this otherwise speedy dish. Deveining, of course, involves cutting a ¼” or so sliver down the back of the shrimp and then using the tip of your knife to lift out the string-like vein. Why bother? Many don’t. Others, however, feel quite strongly about taking this extra step, both for esthetic reasons (a big black vein running down the hump of an otherwise pretty pink shrimp can be a deal-breaker for some) and for taste, as the vein can sometimes be a little gritty and bitter. There’s no clear consensus here, though for what it’s worth I did devein and will probably continue to in the future.

Also, unless you’re buying your shrimp straight from the deck of a fishing boat it will most likely have been frozen and then thawed prior to your purchase. As a result, America’s Test Kitchen suggests buying individually frozen shrimp and thawing them yourself. This will ensure less handling by the purveyor and ultimately more flavor for you.

Directions:
—Bring a 6- to 8-quart pot of salted water to a boil.
—Meanwhile, heat oil in a 12-inch heavy skillet over moderately high heat until hot but not smoking, then sauté shrimp, turning over once, until just cooked through, about 2 minutes, and transfer with a slotted spoon to a large bowl. Add garlic to oil remaining in skillet along with red pepper flakes, wine, salt, and pepper and cook over high heat, stirring occasionally, 1 minute. Add butter to skillet, stirring until melted, and stir in shrimp. Remove skillet from heat.
—Cook pasta in boiling water until just tender, about 3 minutes. Reserve 1 cup of pasta-cooking water, then drain pasta in a colander. Toss pasta well with shrimp mixture and parsley in large bowl, adding some reserved cooking water if necessary to keep moist.