From the March, 2012 Bon Appetit (click here to view the recipe) 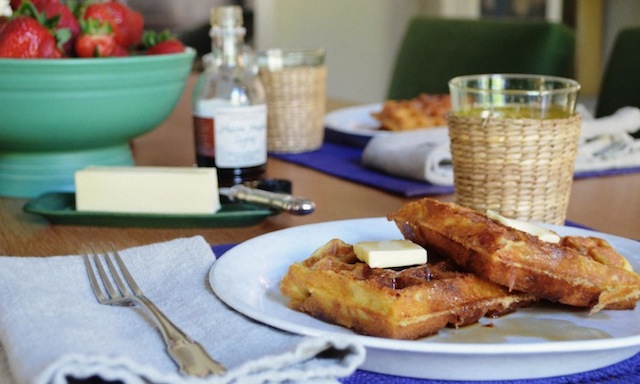 As you’ve probably figured out by now, it’s often the simplest recipes that call out to me the loudest. In fact, when people ask what kind of food I tend to make, I’ve taken to describing it as “salt-and-pepper” cooking—a phrase I borrowed from Christopher Hirsheimer, one-half of the Canal House team, and a duo whose cookbooks and recipes are a constant source of inspiration for me. I suppose on some level that fuss-free approach makes sense when you’re operating out of a New York City kitchen with its limited counter and storage space, but I’m also just drawn to food that features big flavors and low production values. No matter what the size of my kitchen, I’d still rather eat a baked potato with just some butter and a sprinkling of fresh pepper and sea salt than I would the kind that’s had its insides scooped out, whipped up, and piped elaborately back into its jacket.

Having said all that, this posting is neither potato-related, nor does it come from the talented pair at Canal House. What it is, though, is the sort of simple, homey recipe that I think the duo might well appreciate—just as I suspect they would the basic baked potato described above. Either way, it’s one that immediately caught my eye, and that’s been sitting on my desk for months now, flagged with a yellow sticky, (and lodged in my memory bank), patiently waiting for its moment. 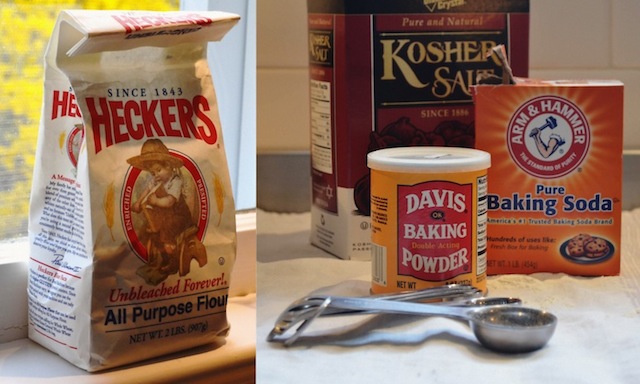 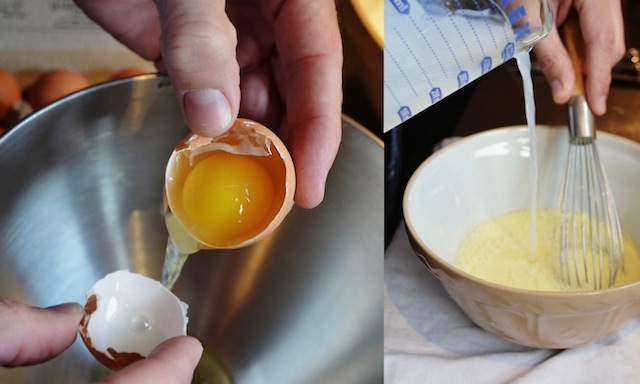 Have I even mentioned that this is a ham-and cheese waffle we’re talking about?! That’s critical here, as it goes a long way to explaining both why I couldn’t stop thinking about the recipe, and why timing was so key. Because even though the item ran in the March issue of Bon Appetit and was one of a very few that month to grab me by the apron strings, I knew it wasn’t an endeavor to be rushed into. After all, by their very nature there are only so many waffles one body can handle. And since there are few things more deflating than a stack of uneaten waffles, the right moment would require numbers greater than just Alfredo and me.

That occasion finally presented itself a few Sundays back, with several houseguests in residence—all of them enthusiastic eaters. At last, the moment had arrived! So early that morning I crept down to the kitchen and began assembling the various components, whisking first the dry ingredients, then the wet ones, beating the egg whites until soft peaks formed (meaning the peaks collapse on themselves as soon as you stop beating), and finally combining the three individual mixtures (the dry ingredients with the wet, followed by the egg whites) into one light, frothy concoction. It’s a quality enhanced by two components—the soda water, which provides the batter with a hint of all-important fizz, and those egg whites, which are folded into the wet/dry mixture and ultimately leave the batter looking like something destined for a soufflé dish. That’s key, as the goal here is to get the lightest possible waffle (or how else will you manage to eat four at one sitting?). 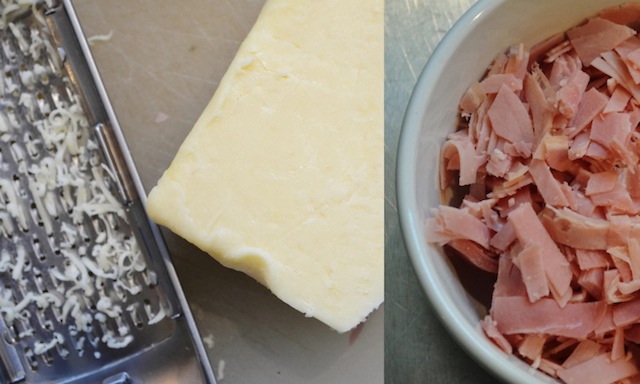 But as I discovered it’s not just the ease of preparing the batter that’s made waffle making a favorite for dads charged with Sunday morning breakfast duty; it’s also the fun that comes with cooking them. Pouring batter onto a hot surface, closing the lid, then opening it after five minutes of hissing and sputtering to reveal something all golden and steaming and crunchy-looking, is the best possible kind of magic trick, and can bring out the kid in you no matter what your age. Perhaps that’s why mid-way through cooking my friend, Dennis, and I started talking like that doyenne of Southern cuisine, Paula Deen (or rather, like SNL’s Kristin Wiig talking like Paula Deen), though that probably also had something to do with the very Southern quantities of butter called for by the recipe! And then, of course, there’s the heady fragrance leaking out the sides of the waffle iron in puffs of tantalizing steam—a blend of eggs and flour that casts its own singular spell. Seriously, it’s hard to imagine anything being wrong in the world when that lovely scent fills your kitchen!

In the case of this particular recipe, both of those qualities—the golden brown peaks and valleys, the buttery fragrance—are only enhanced by the addition of the shredded ham and the grated cheese, which the recipe suggests you sprinkle across the surface of the batter once it’s introduced to the hot waffle iron (see final paragraph below for an alternate approach to the cheese). The pair function in much the way ham and cheese layered within a really good croissant does. Which is to say that it takes something quite magnificent and makes it even more so, adding texture and flavor that bullhorns the various other ingredients. And herein lies the secret of this simple recipe: when you add the salty yin of ham and cheese to a waffle’s already sweet, malty yang, and then gild it with a pat of butter and a few shots of warm Maple syrup, you’re left with something that’s near impossible to stop eating. 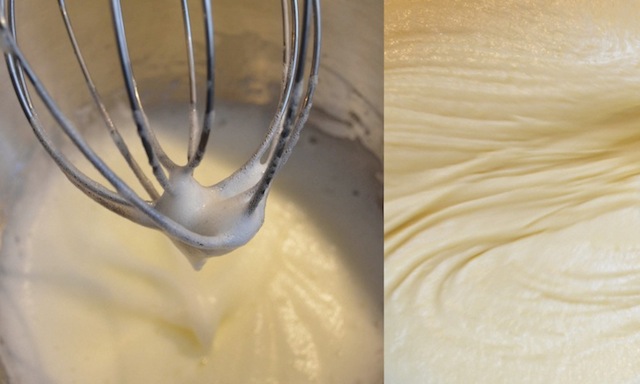 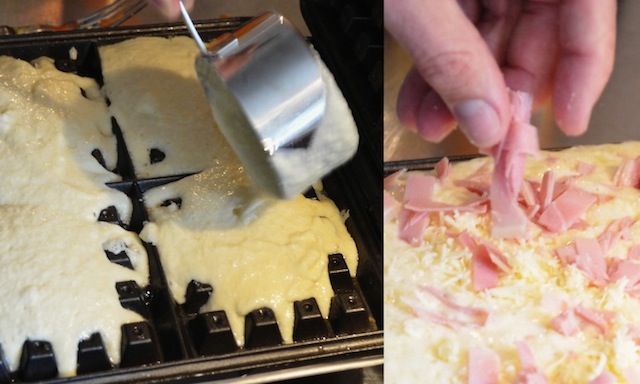 A few final tips on the recipe: To ensure that the melted butter merges smoothly with the other wet ingredients, be sure to first bring the egg yolks, the buttermilk, and the soda water to room temperature (a half hour or so out of the fridge should do it). Also, even with a liberal spraying of non-stick vegetable oil to the waffle iron, I still found that the cheese caused the finished waffle to stick to the upper level of the iron. Instead, try adding the cheese to the batter before ladling it onto the iron’s hot surface. That way the cheese will be distributed throughout the body of the waffle and will not simply be limited to its upper ridges. In other words, a more consistently cheesy waffle and one that won’t cling to the top of your iron.

NOTE: This batter also makes a fine waffle without the addition of the ham and cheese. 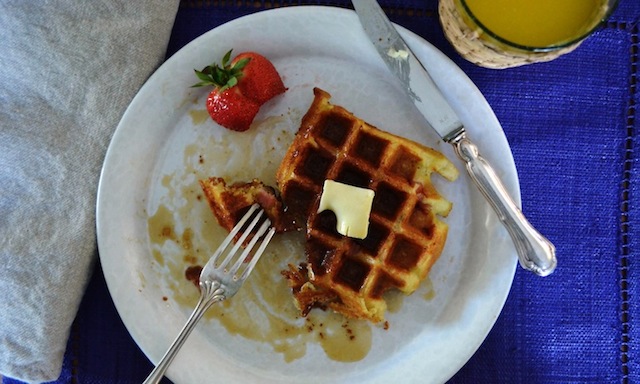