From the August, 2011 Food and Wine (click here to view the recipe) 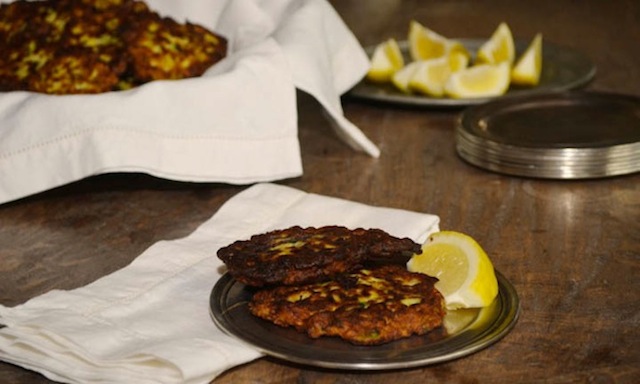 I wish I could tell you that this recipe demanded my attention because I had a bumper crop of zucchini sitting in the fridge and here was a way to call all that late summer bounty into service. But no, I have not been trawling the local farm-stands or stocking up at the farmer’s market — the simple truth is much less admirable, and it’s this: I’m a sucker for anything fried. Of course, the fact that I’d be frying something with a degree of healthfulness associated with it made the endeavor that much easier to rationalize. But honestly, I’d probably have dived in here if the recipe had called for shredded potatoes, or globs of sugary batter, or cheese.

In fact, this recipe does call for cheese, or at least something close to it — a sheep’s milk ricotta, which only made the prospect of pulling out the frying pan that much more certain. And I liked the photo. Show me an image of some sort of fried savory anything, its golden brown exterior glistening with a light sheen of salt and oil, and you’ve got my attention. Add a lemon wedge as Food and Wine does here (the recipe can be found in their current issue), its juice already drizzled across the fritters’ craggy landscape, and I’m yours. 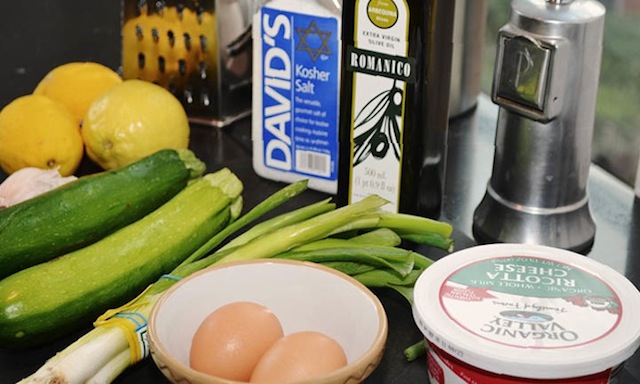 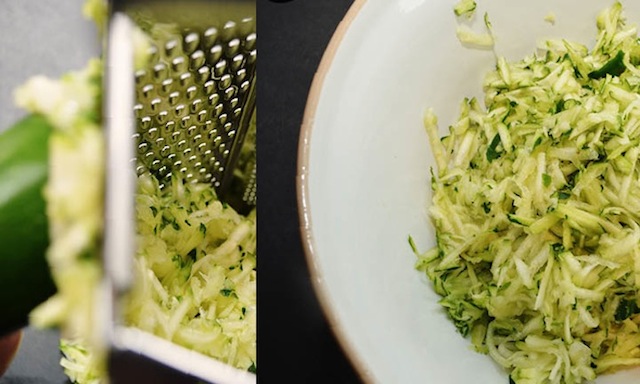 Now you might think from all this rhapsodizing that whipping up a batch of fritters (frittering?) is something I do with regularity. You’d be wrong. Prior to tackling this recipe, my fritter making experience has been nil, while my fritter eating experience has been limited to either clearing as many of these little golden disks from various cocktail trays as possible, or claiming more than my share on those occasions when a friend decided to make them. In other words, I haven’t been getting nearly enough. The attached recipe seemed easy, though, and the addition of the ricotta was an unexpected and enticing twist, so I figured it was time to take matters into my own hands.

Really, what had I been waiting for? In some vague way I’ve always assumed fritter-making to be somehow messy and labor intensive, but there was nothing to it. For these you simply shred 2 medium sized zucchini then mix the results with some sliced garlic and scallions, two large eggs, two teaspoons of lemon zest, a little salt and pepper, ½ a cup of ricotta cheese, and you’re nearly there. I wondered for a moment whether I shouldn’t be squeezing some of the liquid out of the zucchini, but as the recipe didn’t suggest this added move, and as the final step of the mixing process called for adding ¾ of a cup of flour, I decided to trust the instructions and assume that the binding quality of the flour would take care of things. It did. 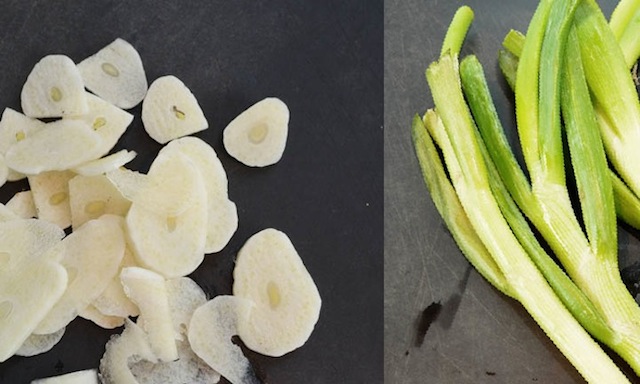 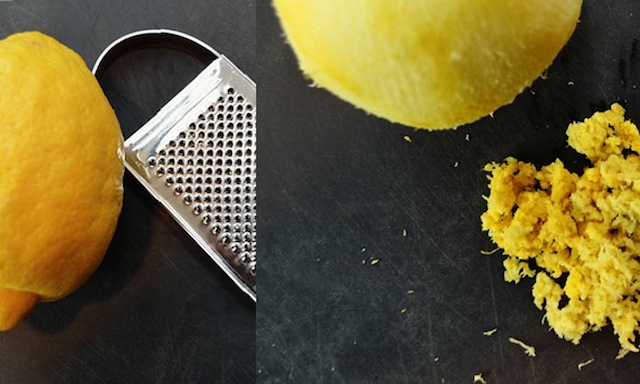 The cooking process reminded me a little of making pancakes with my dad when I was a kid. As with pancakes, you drop a small amount of the batter (about 2-tablespoons’ worth) into a pan of hot oil, then hold your breath for a second, praying that your various dollops don’t collide, merging into one giant, unwieldy pancake. In fact, there’s no need to worry — the batter is more solid than liquid and only slides so far before its sides begin to take on a sturdy golden texture, which effectively stops it in its tracks. That’s when you know the perimeter of each pancake is safe, and that it’s nearly time to flip and fry the other side. Depending on how browned you want them (I like them dark) the total cooking time falls somewhere between three and four minutes, though as with pancakes, the anticipation can sometimes make that feel much longer. You do want to make sure not to overcrowd the pan (I found that my 12-inch skillet could safely handle about four fritters), so you’ll need to work in batches. This is good, as it allows the fritters a moment to cool and drain between batches, so have a few paper towel-lined cookie sheets at the ready to handle this. 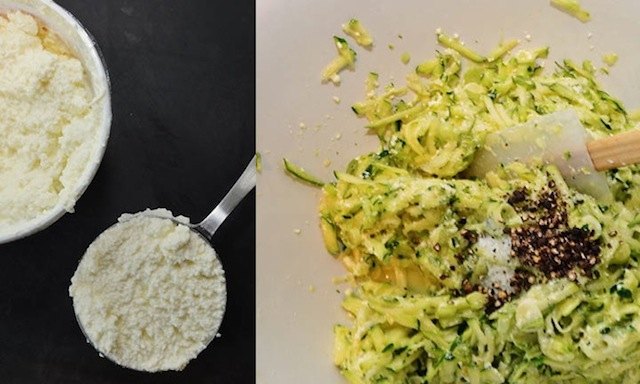 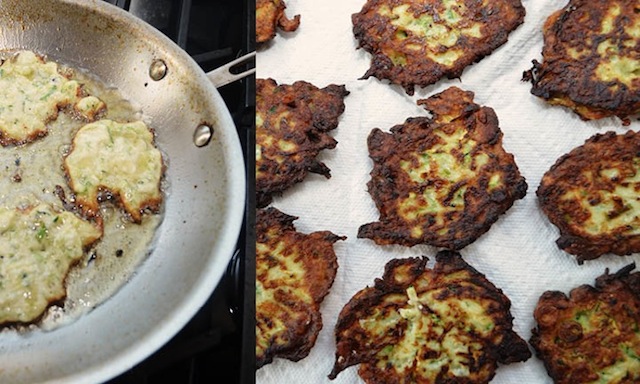 Also, as I mentioned earlier, this recipe calls for a sheep-milk ricotta, which has a slightly richer taste than the easier to find cow-milk variety. I’ve made it with both types, and though using a cow-milk ricotta resulted in a fritter with a little less flavor, this shortcoming was remedied with some extra lemon juice (though go for the sheep-milk if you can). Regardless of what type of cheese you use, however, I found that a light sprinkling of sea salt, along with the lemon juice, gave the fritters just the flavor nudge they needed.

The fritters are best right out of the frying pan, when their crunchy exterior is slightly hot to the touch, and the soft, silky interior still holds a puff of steam. If you’re not able to serve them right away, though, the fritters can be kept at room temperature for a few hours, then recrisped in a 325-degree oven. Either way, you’ll find you have no shortage of grateful mouths to devour them — even if it’s only your own.

Directions:
In a large bowl, combine the zucchini, garlic, scallions, ricotta, eggs, lemon zest and 1 teaspoon each of salt and pepper. Stir well, then stir in the flour just until incorporated.

Line a large baking sheet with paper towels. In a large skillet, heat ¼ inch of olive oil until shimmering. Working in batches, add 2-tablespoon mounds of the zucchini batter to the hot oil, spreading them to form 3-inch fritters. Fry over moderately high heat, turning once, until brown and crisp, about 3 minutes. Drain the fritters on the paper towels and serve right away, with lemon wedges.

NOTE: The fritters can be kept at room temperature for up to 2 hours and recrisped in a 325-degree oven.