From the May, 2012 Bon Appetit (click here to view the recipe) 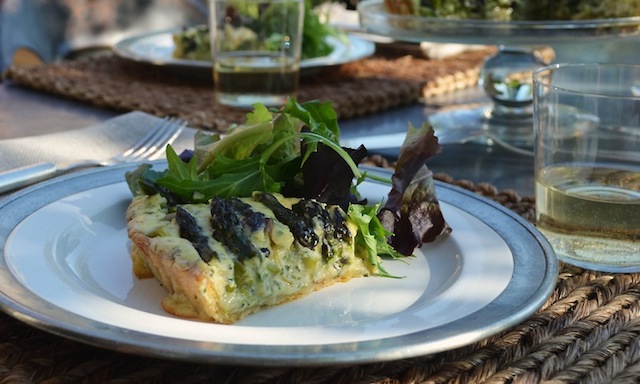 For weeks I’ve been looking for a way to feature asparagus on these pages, in large part because nothing says “spring!” like those emerald green spears with the purple-y tips (and yes, also because I simply felt like eating them). The problem was that while the vegetable may find its way into my kitchen with some consistency this time of year, I generally do little more with it than trim it, steam it, and drizzle it with butter and lemon juice—a simple (if satisfying) approach that could hardly be called a recipe. So I went on the hunt for one I could share with you here, something that would give asparagus the star turn it deserves, but that would do so in a way that didn’t dilute the very reason for eating it, namely its bright, grassy flavor. And what I found was . . . not much. Sure, there were the ubiquitous salad treatments and soup recipes, but none seemed quite right for you, either because there just wasn’t enough to them, or because they plain didn’t sound, or taste, all that enticing (I’ve never been much of a fan of asparagus soup). There had to be something I could do with asparagus that would merit a few paragraphs here!

The answer presented itself with the May issue of Bon Appetit, in the form of a spring vegetable and goat cheese tart—“spring vegetable,” in this case, meaning the pairing of asparagus and spring onions. Spring onions. Do you know what those are? . . . Well I only sort of did, so for those of you like me with only the sketchiest of ideas, here’s what I found: “The spring onion has a slightly more rounded and defined bulb than the slender and more delicate green onion. The flavor has more bite and is somewhat hotter.” (Thank you Lowfat Lifestyle!) That being said, and despite what you might expect given its name, I couldn’t find any when I needed them, which was less of an issue than you might expect for two reasons—the first being that the recipe makes it clear you can substitute the spring onions with a somewhat larger number of scallions (otherwise known as “green onions,” see above), and the second being that, the name of the dish notwithstanding, this tart is essentially a platform for asparagus. In other words, the onions are secondary to those emerald green stalks; exactly what I’d been looking for. 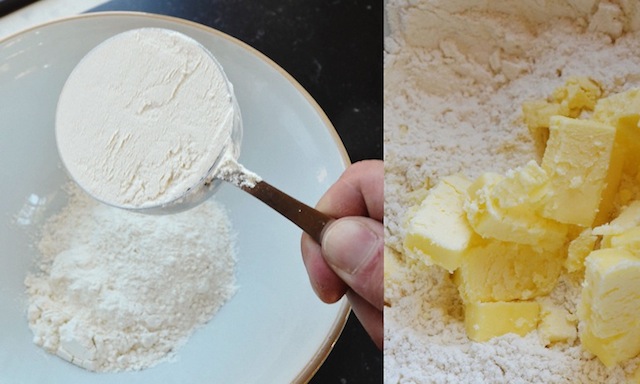 I also love any excuse to pile ingredients into a pastry shell, as this recipe has you do. Since preparing pie crust is a time-suck that ranks high on the least-favorite-things-to-make list of many a home cook, BA generously suggests that readers use a store-bought crust, as they do. If you can find one that you like, I say go for it, though for the sake of this posting, and because I don’t actually mind making pie crust, I went ahead and assembled my own (the recipe, also from BA, is included below). And for what it’s worth, as written it’s a fairly stress-free exercise, with the greatest challenge directed at your patience, since the dough must chill twice (first in its pre-rolled state for an hour, then in the tart pan for an additional twenty minutes), and baked an equal number of times (once with pie weights, once without, for a total of about forty minutes). But really, beyond the mixing and the rolling and the waiting, there’s nothing much to it.

Nor is there to much to preparing the tart’s filling, which is considerably faster than the dough. There’s the 15-minute roasting of the asparagus tips and the onion bulbs (halved or quartered depending on which variety you’re using), which have previously been tossed with a little olive oil, salt and pepper. This step is followed by a quick sauté of the asparagus stalks and pale green portions of the onion, both of which have been sliced into ¼” slivers. Once cooled this sautéed mixture is spread across the base of the baked pastry shell, then capped with a mixture of the wet ingredients (the all-important goat cheese, along with a quantity of crème fraîche and heavy cream, as well as 3 large eggs), plus a variety of fresh herbs (minced flat leaf parsley, chives, and tarragon). This combination is then crowned with the roasted items and the whole assembly is sent to the oven where it will stay for about 20 minutes or so, or until the crust is bronzed and the filling is just set. 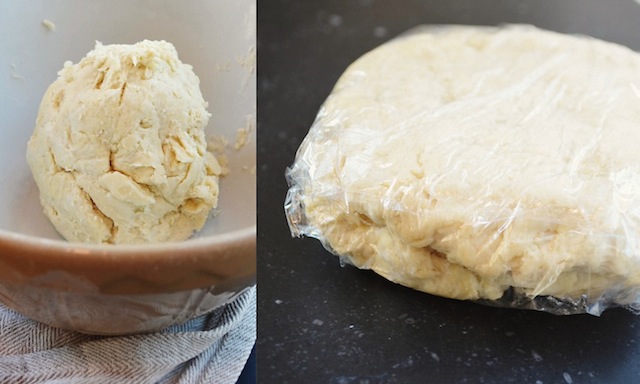 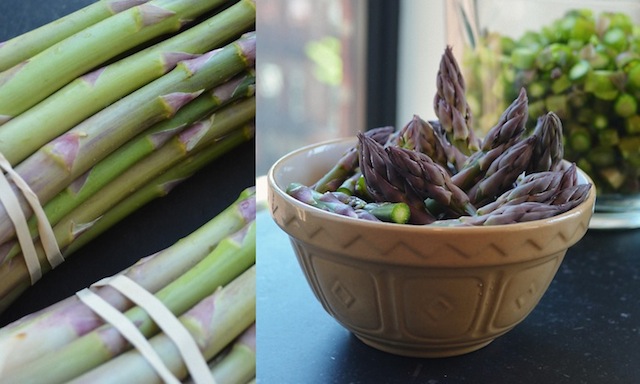 As for the previously mentioned goat cheese, the recipe calls for a “soft, fresh” variety—which I took to mean cheese that had not been sitting in the fridge for the past week. I suppose the folks at BA might also have been suggesting that you source a variety at your local farmer’s market, presumably made during the preceding days, though the organic variety I purchased at Whole Foods (and, I imagine, not made mere days before) tasted just fine to me. Either way, do bear in mind that goat cheese can be salty, so when the recipe suggests seasoning the cheese/crème fraîche mixture with salt and pepper, go easy—it likely won’t need much of either.

After all, the point here is to spotlight asparagus, and that’s exactly what comes shining through, along with the mellowed taste of caramelized onion, and the pleasantly sour taste of the goat cheese mixture. It’s a winning combination that takes asparagus in a bright new direction without drowning out the qualities that make it unique. The recipe earns points for looks and texture too, as the tart’s vibrant surface—all bright greens and sunny yellows—gives way to a creamy herb-flecked interior, before reaching that buttery crust. And as a little reward at the end of your fork’s journey through each slice are yet more of those spring vegetables, creating a layer cake of effect Spring goodness. In other words, as good an argument for seasonal eating as you’ll ever need. 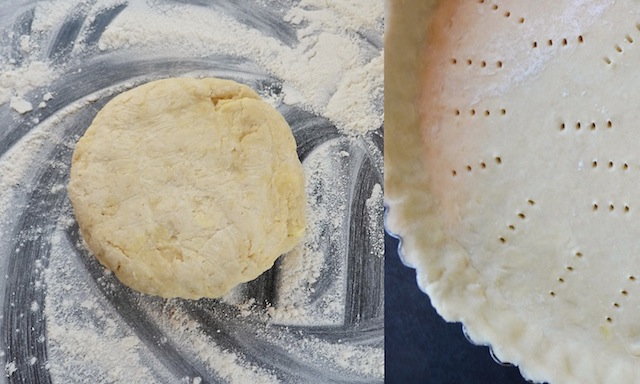 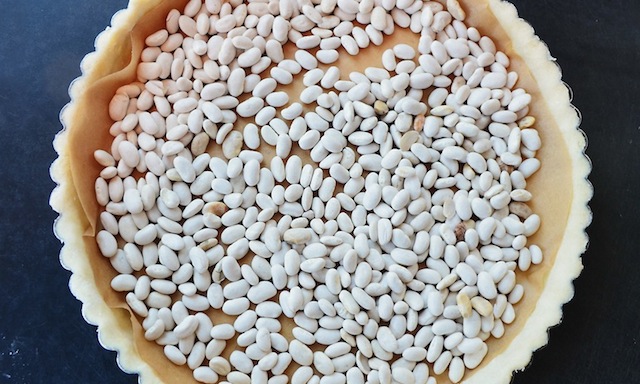 Directions:
—Roll out pie crust on a lightly floured surface to a 12” round. Transfer to tart pan and press onto bottom and up sides. Bake crust according to package instructions. Let cool in pan on wire rack. [Note: see instructions below for making your own.]
—Preheat oven to 425˚. Line a baking sheet with foil. Cut off top 1½” of asparagus tips; reserve. Slice stalks into ¼” rounds. Cut white bulbs from spring onions; trim and quarter (halve if using scallions). Slice pale green parts into ¼” pieces.
—Toss asparagus tips and spring onion bulbs in a small bowl with 2 tbs oil; season with salt and pepper. Place in a single layer on prepared sheet; roast, turning once, until onions begin to brown and asparagus is bright green and tender, 12 to 15 minutes. Transfer to a small bowl. Reduce oven temperature to 375˚.
—Meanwhile, heat remaining 1 tbs oil and butter in a medium skillet over medium heat. Add sliced asparagus and pale-green parts of spring onions; season with salt and pepper. Cook, stirring often, until onions are soft and asparagus is bright green and tender, 6 to 8 minutes. Let cool slightly in pan. Spread evenly over bottom of tart crust.
—Whisk cheese and next five ingredients in a medium bowl. Season with salt and pepper. Whisk in eggs. Pour over vegetables. Scatter asparagus tips and spring onion bulbs over.
—Bake tart until edges of crust are golden brown and filling is set, 20 to 22 minutes. Let cool in pan for 20 minutes or up to 4 hours.
—Remove sides of pan. Serve tart warm or at room temperature.

Directions for pie crust:
—Whisk flour, sugar, and salt in a medium bowl. Add butter; rub in with your fingertips until mixture resembles coarse meal. Add ¼ cup ice water. Work mixture with your fingertips until dough comes together in moist clumps, adding more water by teaspoonfuls if dry. Gather dough into a ball; flatten into a disk. Wrap in plastic; chill until firm, about 1 hour. Note: Can be made 1 day ahead; keep chilled.
—Arrange a rack in middle of oven; preheat to 375˚. Roll out disk on a lightly floured surface to a 12” round. Transfer to tart pan; press onto bottom and up sides of pan. Trim excess dough; prick bottom of crust all over with a fork. Chill for 20 minutes. Line crust with foil or parchment paper; fill with dried beans or pie weights.
—Bake crust until sides are set, about 20 minutes. Remove from oven and lift out foil and beans. Return to oven and bake crust until bottom is set and pale golden, 18 to 20 minutes longer. Let cool in pan on a wire rack. 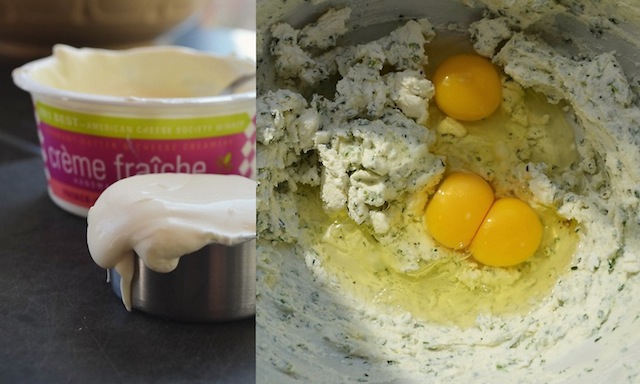 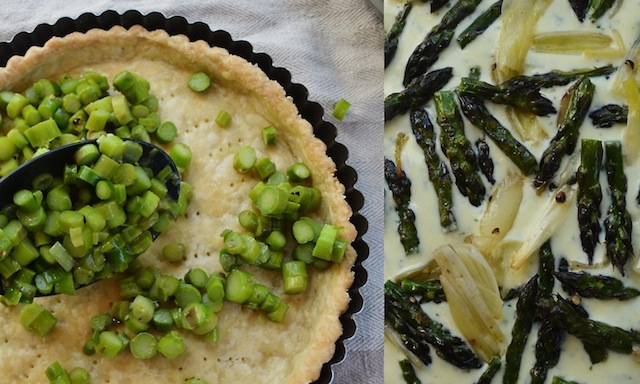 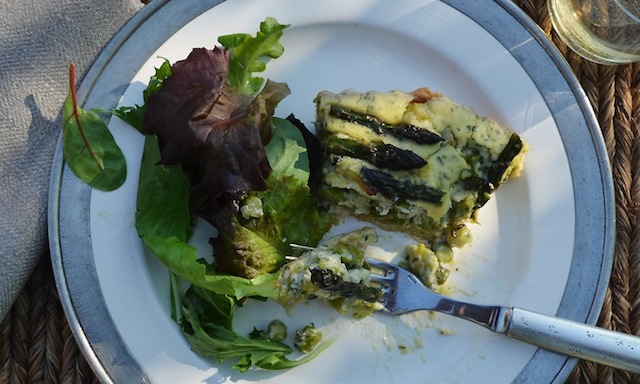 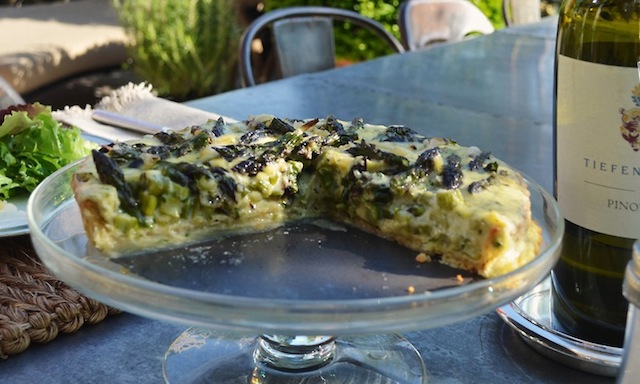