Adapted from the May, 2013 Bon Appétit 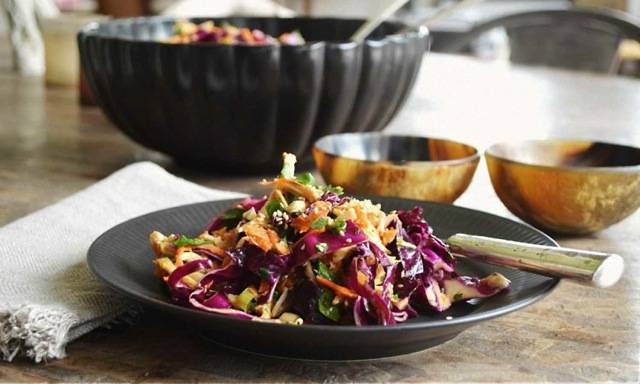 Have you noticed how some of the cooking magazines have a page or two each month devoted to reader requests for favorite restaurant dishes? Well this is the spot where I would have included one of those myself, except that the recipe I’ve been wanting to bring to you, or more precisely the restaurant associated with it, is not the sort that believes in sharing. I know this because on repeated occasions I’ve asked whether they (“they” being a little waterside operation on the vacation island of St. Bart’s) would be willing to pass along their recipe for Asian chicken salad, and each time my request has been met with a steely “no.” Given the tenor of their response and the fact that their portions are small and their prices are high, you might wonder why I continue to frequent this particular establishment. The answer, of course, is because I like the food… a lot—especially their coconut tart and the aforementioned chicken salad. And so each time I’ve visited the restaurant over the years I order both (if they’re on the menu) in the hopes that I’ll be able to break down the various components sufficiently to recreate the dishes myself at home, something I have so far been unable to accomplish. 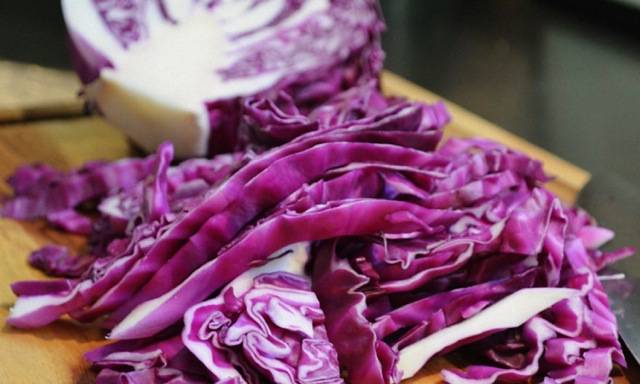 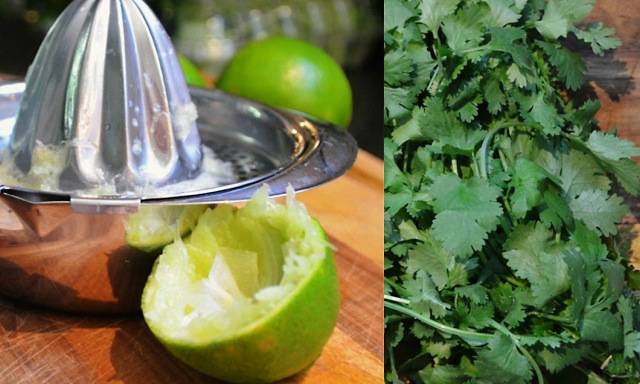 But recently I was thrown a lifeline, in the form of this recipe for Asian chicken and cabbage salad, which I found in the May issue of Bon Appétit. While the dish is not an exact match to the restaurant version I love (for one thing it features red cabbage instead of white), it offers enough of those components that have kept me coming back for more—namely the tang of citrus and vinegar, the subtle heat of a finely diced pepper, the crunch of peanuts and sliced cabbage, and the mild sweetness of roast chicken—to be a reasonable facsimile. In fact, I’m not sure I don’t like this version even more, in part because it also includes a number of ingredients I’ve never noticed in the other, such as baby spinach, cilantro, and a small amount of fresh ginger, all terrific additions to this flavor-packed combo. 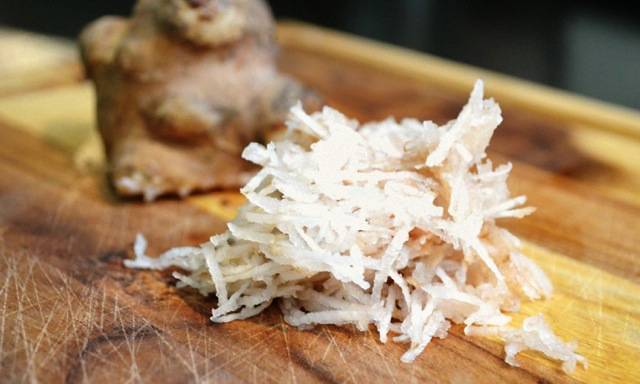 I also love how easy it is to assemble, though that probably comes as no surprise since this is a chicken salad we’re talking about and not—I don’t know—a soufflé or something more elaborate. You begin with the dressing, which consists of the chile (either a jalapeño or Fresno variety) and the ginger, some olive oil, the lime juice, and a small amount of soy sauce, brown sugar, and fish sauce, all of it whisked together in a large serving bowl until emulsified. Next you add 3 cups of shredded chicken (pulled from a rotisserie chicken to make your life even easier, though as the recipe points out leftover shrimp or sliced pork would also be great), along with the various vegetables—specifically, half of a small head of red cabbage (sliced), two shredded carrots, a handful of chopped scallions, a cup of slivered spinach, and 1/3 cup chopped fresh cilantro. In other words, all healthy stuff (okay, maybe not the brown sugar but there’s only a little) and taken together, seriously delicious! 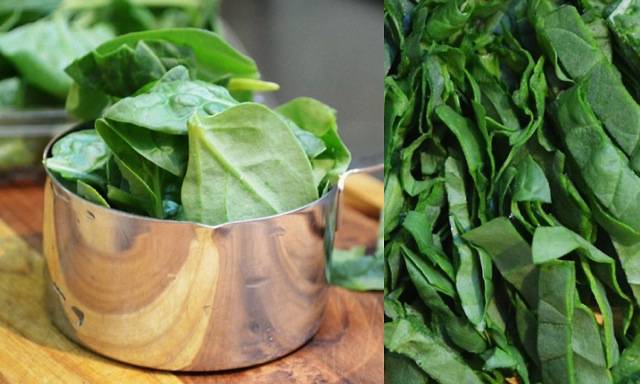 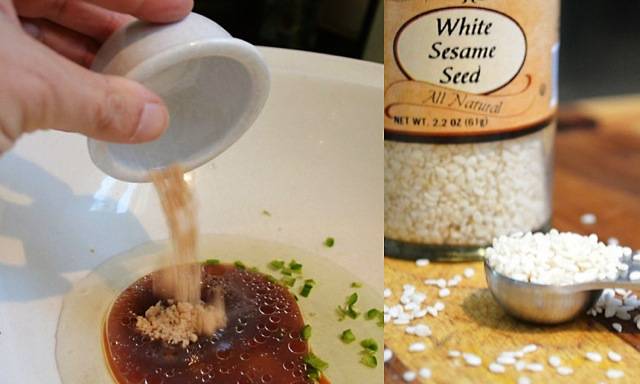 As for those peanuts, these—along with some toasted sesame seeds—are sprinkled across the surface of each serving, providing a little visual interest, not to mention more of that all-important crunch. So clearly, there’s no shortage of things to love here. But perhaps best of all is the fact that unlike those tiny appetizer portions served up at the restaurant in St. Bart’s, if you make it at home you can eat all you want. In other words, forget treating this salad as a warm-up act and elevate it to entrée status. I can’t think of a better, more satisfying meal for a hot summer night. 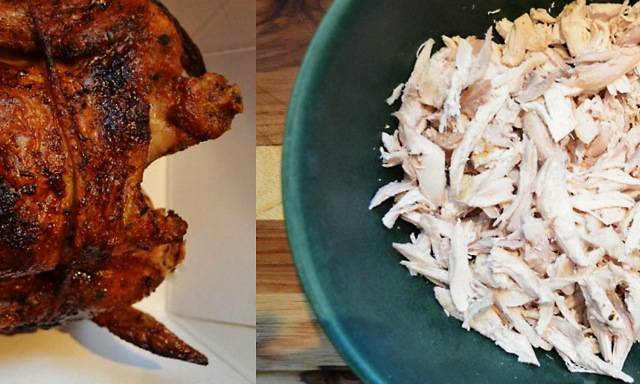 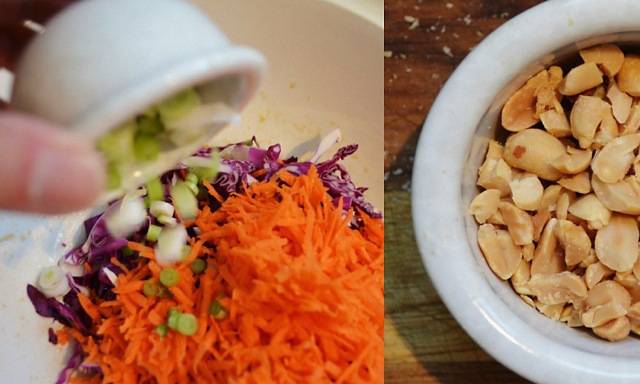 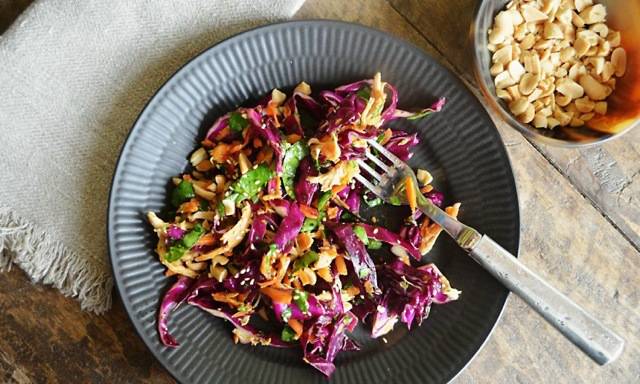