From the Feb., 2011 New York Times Magazine (click here to view the recipe) 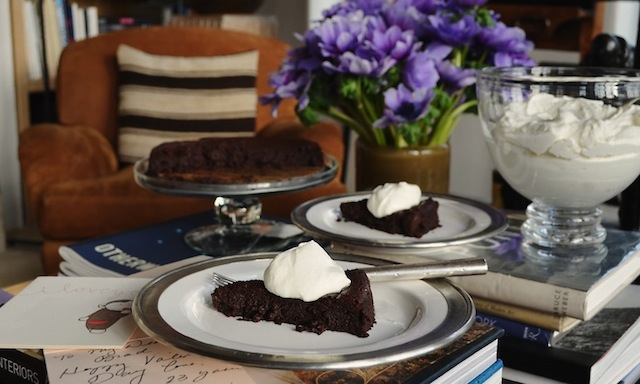 I feel a little guilty about bringing this one to you. For one thing it’s early days in 2012 and many of you are still committed to those New Year’s resolutions — the ones that have you stepping up the gym routine or eliminating carbs and sugar from your diet (and I want to support that… seriously, I do!). For another, well, this is the type of recipe that can get you into some trouble, largely because once it’s made and sitting on your kitchen counter it can function as a kind of magnet, drawing you in for yet another small sliver, and then another (as it did me). So yes, I fully acknowledge the dangers here. But it’s Valentine’s Day (or very nearly), and you know what they say about chocolate and romance! Given this and assuming that there’s someone you’re interested in seducing, I’ve decided to look past my reservations and share with you what is now my new favorite chocolate cake (and with it the promise that I will bring you a recipe for kale salad or some such very soon!) 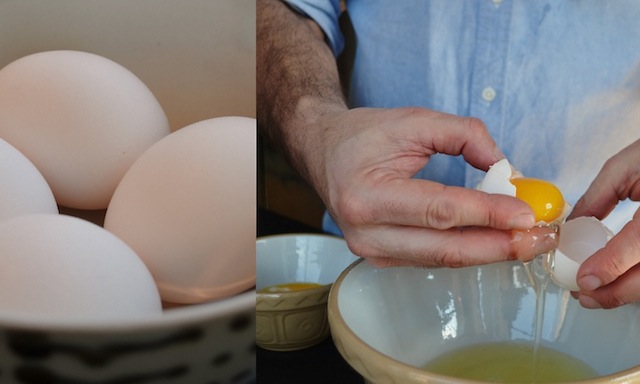 My own relationship with chocolate cake goes way back, to the days when I was a kid and all I wanted to eat was chocolate cake and pizza. Of course, back then my idea of chocolate cake was the double layer variety, hidden beneath waves of inch-thick chocolate icing. Which is to say that given the choice, this is not the cake I would have selected back then. Think of this as the grownup version of that earlier cake — after a year abroad perhaps, followed by a few classes at the French Culinary Institute. That doesn’t mean it’s complicated to make or even that it’s been fancied up somehow. Quite the contrary, in fact — the cake is surprisingly easy to prepare, in part because it’s been reduced to its key elements, just chocolate, eggs, butter, and sugar, with just a very little bit of flour, and zero icing. Simple.

The recipe was actually first published in The New York Times in the late ‘60s, under the name “Evelyn Sharpe’s French Chocolate Cake.” Presumably back then the name Evelyn Sharpe meant something, but in the intervening years whoever she was seems to have been lost to history (if you can correctly identify her please share the info with me, and in exchange I’ll personally bake Ms. Sharpe’s cake for you). What is known is that in the ‘80s her cake recipe (or ones very like it) came to dominate dessert menus across the country under names such as “Chocolate Decadence” or “Death by Chocolate” (though not “Flourless Chocolate Cake” as the version here has one tablespoon of flour, making it an almost flourless chocolate cake). 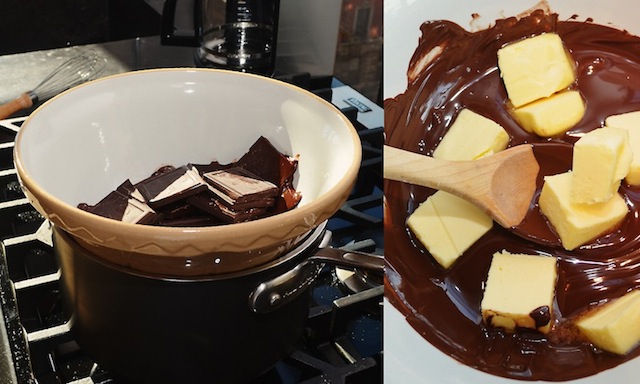 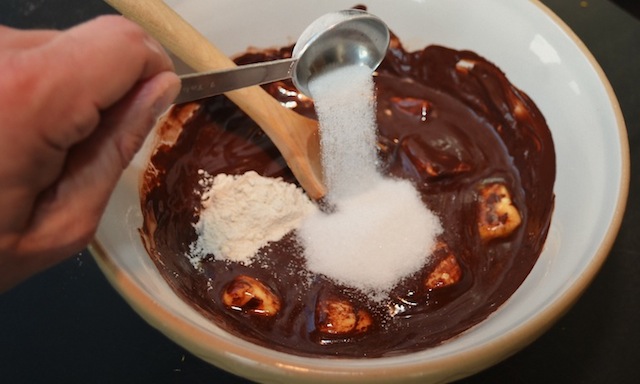 In any case, it’s to another individual that we owe the recipe’s recent resurfacing — namely the food writer Amanda Hesser, who unearthed the original and republished it last winter in The New York Times Magazine with just a few minor but significant revisions. First and foremost she suggests substituting the pound of regular baking chocolate called for in Sharpe’s version with the semi- or bittersweet variety — this to help keep things from becoming overwhelmingly cloying (a cause aided by her substitution of salted for unsalted butter). And as for the whipped cream accompaniment that’s a virtual requirement for a cake of this density, she suggests folding in a tablespoon or two of crème fraiche for a little added tang (a brilliant move that will forever change how I approach whipped cream, though I did elect to add some sugar to the cream, as well).

Now having used the word “dense” several times to describe this cake, I feel I should take a moment to explain that while it’s an accurate description where both flavor and texture are concerned, the cake is neither heavy nor overpowering. The presence of the whipped egg whites gently folded into the molten chocolate helps to resolve any textural issues, and the Hesser tweaks mentioned above keep the final result from becoming overly rich. A well-made chocolate mousse has a density of flavor that manages to avoid tipping into the realm of the cloying or heavy, and it’s a quality this cake shares. 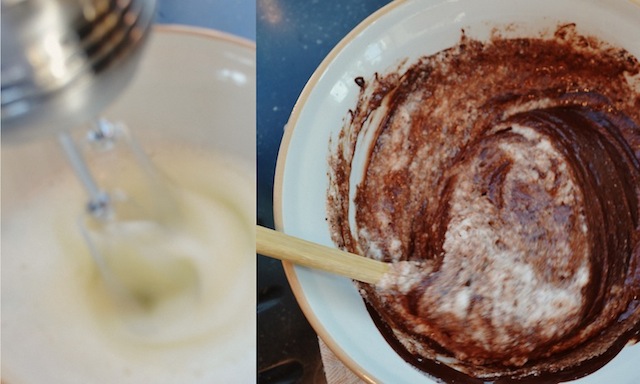 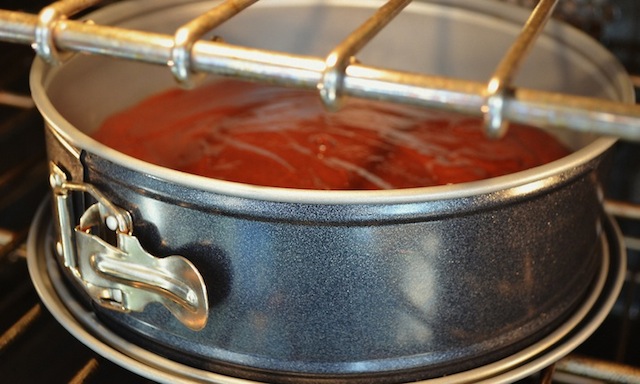 That said there are a few steps in the recipe’s directions that are key to achieving this result, and that I thought could be aided with a little clarification. The first involves the egg whites and the instruction to beat them “until they hold a definite shape but are not dry.” This, apparently, is bakery chef-speak for beat the whites until soft peaks form but not to the point where those peaks are able to retain their shape (in other words, you want those peaks collapsing on each other). I also stumbled on the line “the beaten egg yolks should be folded smoothly, quickly and easily into the chocolate mixture” — which I ultimately realized is a complex way of saying, gently fold the egg whites into the chocolate and don’t overwork the mixture. Remember, the goal here is to marry the airiness of the egg whites with the airlessness of the chocolate, and not to smother it.

But even if some of the instructions require a repeat reading, none of them are particularly complicated or time consuming. In fact, once the chocolate has melted (as per the directions, take your time here) the cake can be assembled quite quickly. It bakes fast, too — just fifteen minutes in a hot oven, with twenty or so minutes more in the same spot but with the heat turned off and the door left ajar. Breathe deeply; the smell is wonderful and just the thing to get things rolling. 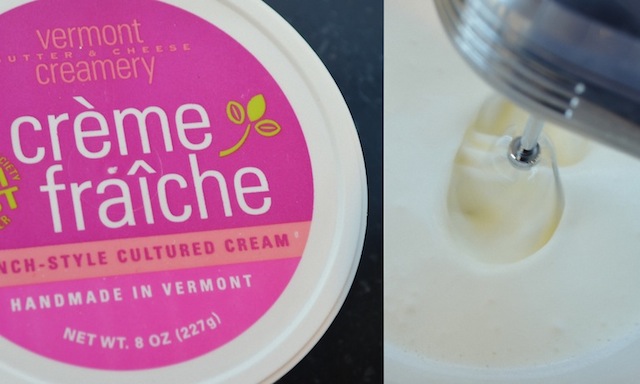 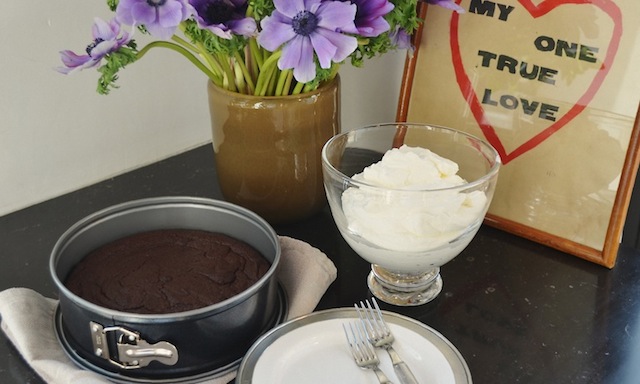 Lastly, a few final comments about equipment: the recipe suggests melting the chocolate in a double boiler, an item I don’t own and wasn’t eager to invest in. Instead, I used a heatproof bowl placed on top of a saucepan of hot water, which worked just fine. The recipe also calls for an 8” springform pan; mine is 10” and again, I didn’t feel like buying the smaller size, in part because I’ve run out of cabinet space. So I used the 10” and baked it for a few minutes less. Admittedly this concession cost me some all-important height, and the end result was not quite as impressive as it might have been. Still, any “short”comings were easily corrected with a dollop of whipped cream. And more importantly, it couldn’t have tasted any better.

Directions:
—Heat oven to 425 degrees. Line the base of an 8” springform pan with parchment paper.
—Melt the chocolate gently in the top of a double boiler over hot, but not boiling, water. Note: this is a critical step and must be done very slowly (or it can be done more speedily in the microwave).
—Remove the melted chocolate from the heat and stir in the butter, flour and sugar. Beat the yolks lightly and whisk into the chocolate mixture gradually.
—Beat the egg whites until they hold a definite shape but are not dry and fold into the chocolate mixture. The beaten egg whites should be folded smoothly, quickly, and easily into the chocolate mixture (overbeating or underbeating will ruin the cake). Pour the mixture into the prepared pan and bake for 15 minutes. Turn off the heat; open the oven door, leaving it ajar, and allow the cake to cool in the oven.
—The cake is best served a little warm. Release the pan’s collar, run a long, thin knife under hot water, and slice.
—Serve with sweetened whipped cream, or with a tablespoon or two of crème fraiche if you like. 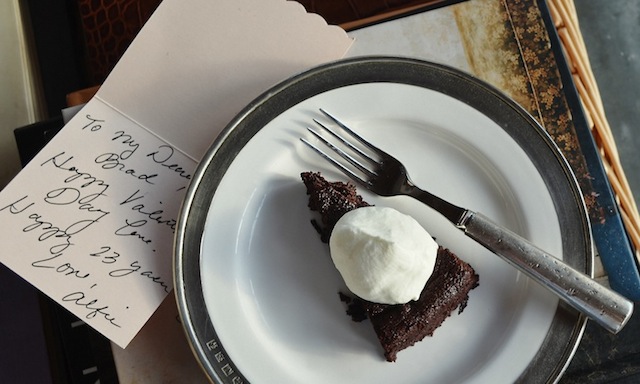