Adapted from the April, 2012 Saveur 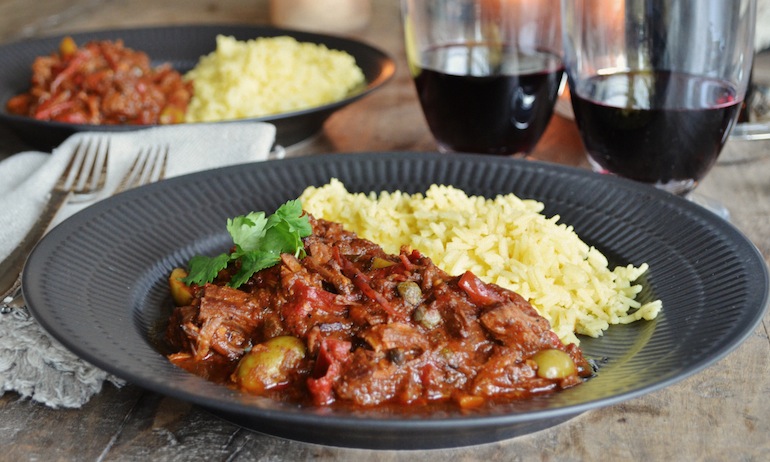 Many years ago, early on in my relationship with Alfredo, he took me to eat at an inexpensive Cuban restaurant on 8th Avenue—a narrow, brightly lit place called Havana Chelsea. This was to be my big introduction to Cuban cooking, the cuisine Alfredo had grown up eating, and it was something I was looking forward to. What I hadn’t anticipated, however, was just how mystifying the experience would be, a result of the menu having been written entirely in Spanish, a language I’d bypassed during both high school and college in favor of French. Alfredo, of course, does speak Spanish (or Spanglish anyway) but his menu explanations came in such a jumble and were so abbreviated that I couldn’t sort out the difference between a tamale and a tostone (for the record, the former is a mixture of corn and pork cooked within a dried corn husk, while the latter is a twice fried slice of green plantain). And so I let my instincts drive my dinner choice, ultimately selecting something called boliché, which I understood to be a kind of Cuban beef stew. The selection was a good one, making me an immediate fan of Cuban cooking, though my pronunciation—more French (bo-li-SHAY) than Spanish (bo-LI-chay)—instantly branded me a food tourist and prompted lots of laughs from both Alfredo and our waitress, Violetta. 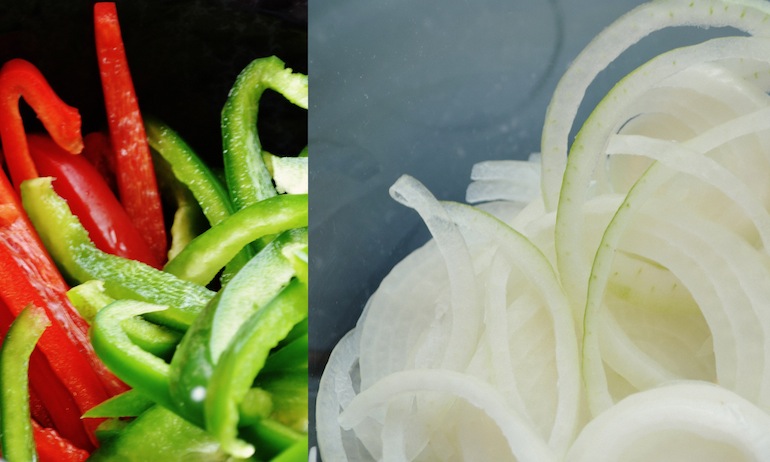 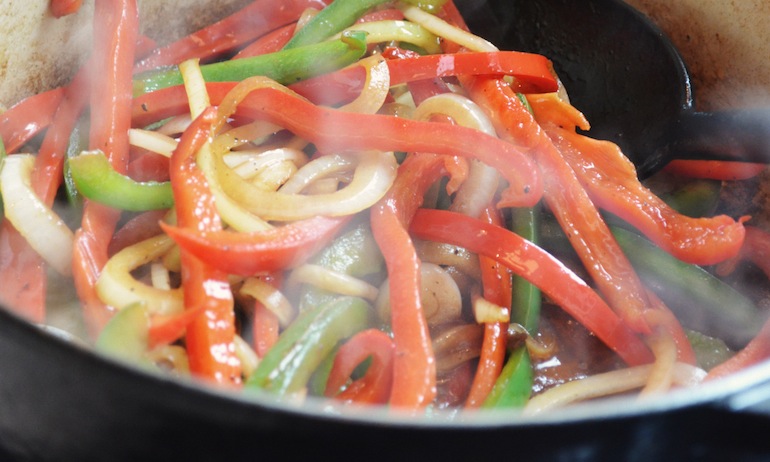 Almost twenty-five years later that mispronunciation has taken on the mythic quality of an old family joke, just as the meal itself has grown in my memory—capturing everything that’s best about Cuban cooking. Today I cook a fair amount of Cuban food myself, and not surprisingly I tend to focus on those meat-based ones that are sautéed or simmered in a quantity of broth and tomato sauce, just like the memorable stew I sampled that night. All of which brings me to the recipe I present to you here. It’s for a dish called ropa vieja, arguably one of Cuba’s most celebrated exports, and one that’s infinitely more enticing than its name suggests (it literally means “old clothes”). Still, despite these qualities, and the fact that the recipe features a strong acidic component—something I’m always in favor of, particularly in the context of a rich meat dish such as this one—it was one I’d never attempted making myself. Spotting this recipe in Saveur last spring convinced me it was time to change that. 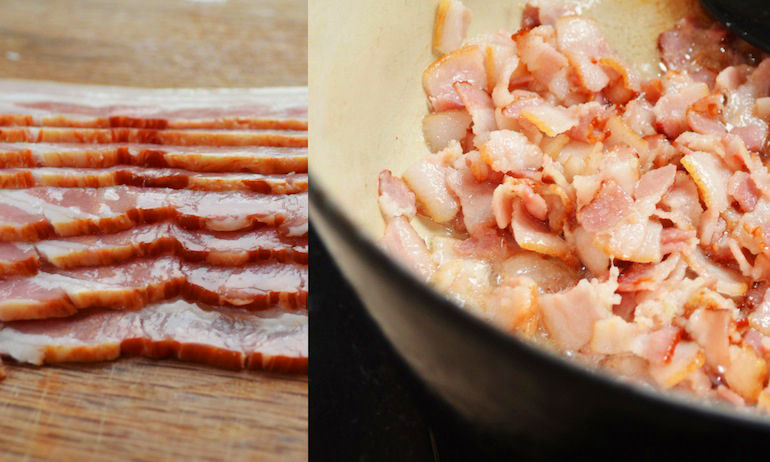 One reason was discovering just how simple the stew is to prepare. That, and spotting the words capers, olives, pimientos, and white wine on the ingredient list was all it took to get me going. And so I set to work, first cooking up a small quantity of bacon (this provides the dish with both its smoky base notes, not to mention the fat needed to sauté the ingredients that follow—a trick that can be employed with virtually any stew), then browning the flank steak I’d cut into 1½” strips (you’ll want to brown in batches, as crowding the beef will actually slow the process). Both of these elements by the way—the bacon and the beef—are cooked independently of each other and then set aside, to be reintroduced later into a mixture that will contain the sautéed onions and peppers (just until soft, about 4 minutes), all of the dish’s wonderful spices (cumin, thyme, and oregano), as well as a quantity of chopped garlic and a 6 oz can of tomato paste. Yum.

Once the above ingredients have been given a brief turn in the pot—about three minutes, or just until the various elements start to caramelize—in goes the white wine. Use this to loosen up any of the tasty bits that may be clinging to the bottom or sides of your pot, and after a minute or so, reintroduce the bacon and the beef, along with the broth and the crushed tomatoes. At this point your work is essentially done (I told you it was easy), though some patience will be required since the entire mixture needs to simmer over medium-low heat for anywhere between 2 and 3 hours, or until the steak is fork tender (I called the meat “done” at the 2½ hour point, though stretching it to 3 hours would not have hurt it any as over-cooking is less of a concern with this kind of dish). 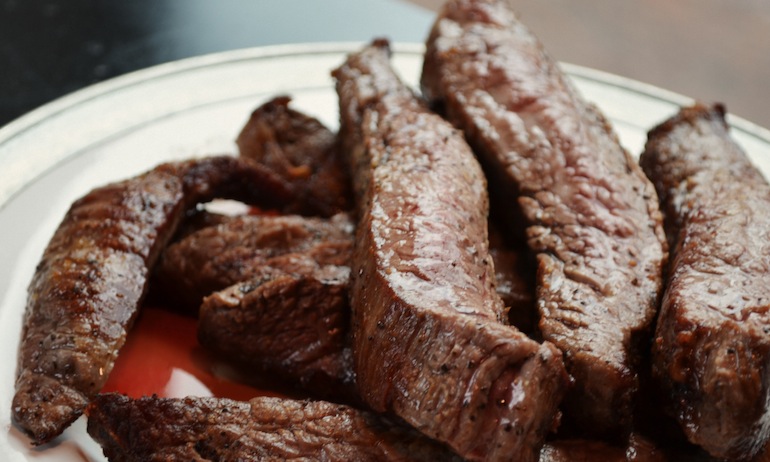 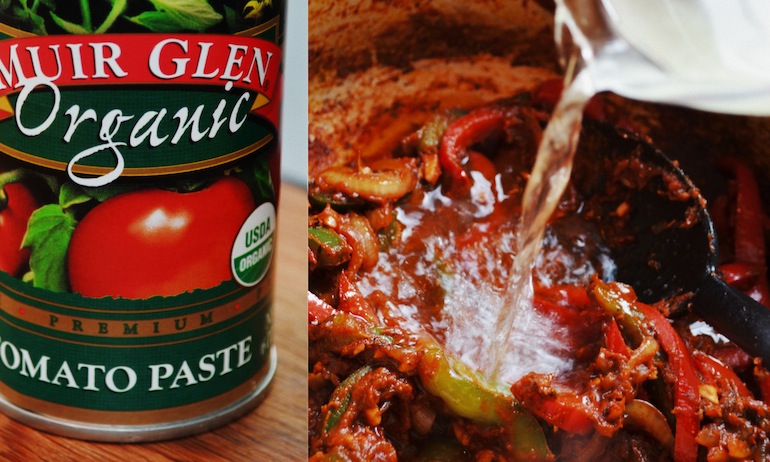 This last stage is critical, of course, since it’s the slow cooking that will ultimately provide the meat with its signature, shredded quality (this is where that “old clothes” image comes in, if you hadn’t made the connection already). That said, the actual shredding does require some participation on the part of the chef, so once the meat is ready, remove it from the pot, allow it to cool slightly (or risk burning the tips of your fingers), then pull it apart into strips—as long and thin as you’re able. Once done, return the shredded meat to the pot (along with any juices that may have accumulated), then add all of those lip-smacking ingredients I mentioned earlier—the olives, the capers, the pimientos, and a tablespoon of white wine vinegar. In other words, if the smells emanating from your Dutch oven didn’t have you swooning already, they surely will now.

Hold on just a little longer, though, as it’s important to let the sauce simmer a bit more, until it’s thickened slightly (think sauce, not broth)—a process that should take no more than a half hour. Once it looks thick and glossy, stir in a ¼ cup of chopped cilantro—an important flavoring component here, so best not to skip—and you’re good to go. What will be waiting at the end of your fork is all the rich, beefiness you associate with a really good stew, but rounded out by a bright, zesty tang thanks to the presence of all those acidic elements. It’s just the thing to cut through the richness of the meat and to raise the ho-hum stew experience to something truly special—a little Latin allegría as the cold weather begins to settle in. 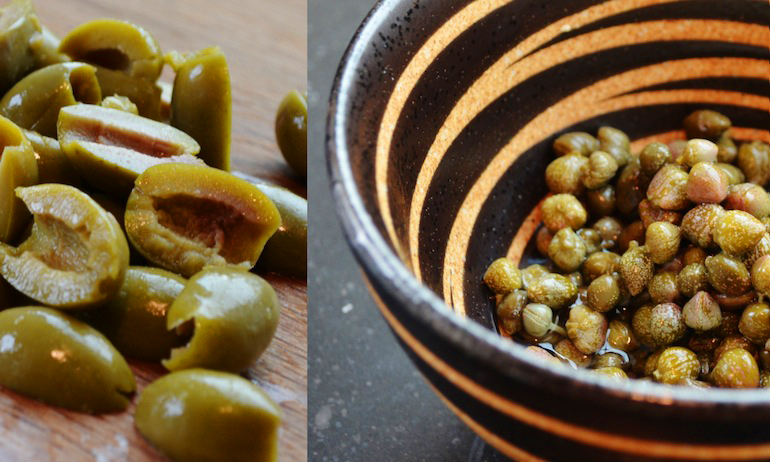 And a final note on the dish’s traditional Cuban accompaniment: yellow rice. After considerable trial and error, and after conferring with various of Alfredo’s Miami-based relatives, I discovered that the signature hue associated with yellow rice does not come from saffron as I’d imagined, but rather from a little-known spice known as annatto powder (also called achiote and marketed under the name Bijol; I’ve provided a resource link, below, as it can be difficult to find). Since annatto actually has a very mild flavor, true “yellow rice” calls for a base (or sofrito) made up of a variety of ingredients including olive oil, garlic, and onion, which is then added to the rice and the various seasonings. For the purposes of this dish, however, the yellow rice plays more of a visual role than a flavoring one, since the stew itself really requires nothing more in this department. Given this, the recipe below provides you with what’s essentially standard cooking instructions for rice, but with the added coloring component—in other words, something that will achieve the bright yellow look on the plate that’s so key to the experience, but that will still taste much like traditional white rice. Or you can click here to get the full-tilt Cuban yellow rice experience. 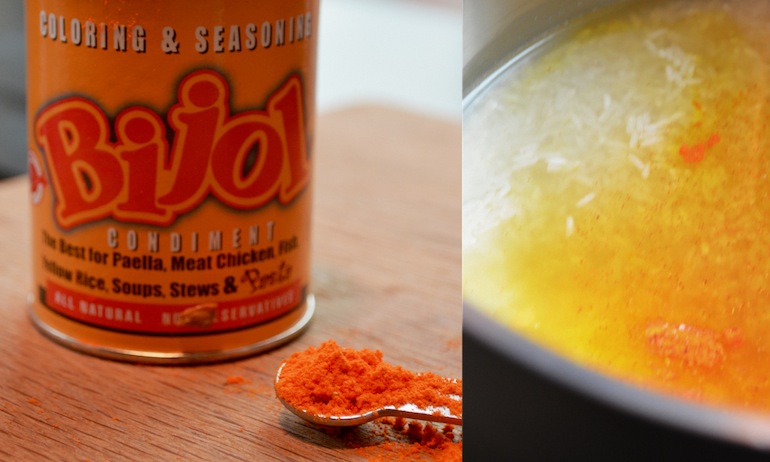 Directions for Ropa Vieja:
—Render bacon in a 6-qt Dutch oven over medium high heat. Transfer to a plate, leaving fat in pot.
—Season steak with salt and pepper. Working in batches, cook until browned on both sides, about 6 minutes; transfer to plate.
—Add onion and peppers to pot; cook until soft, about 4 minutes. Add tomato paste, cumin, thyme, oregano, garlic, and bay leaf; cook until lightly caramelized, about 3 minutes.
—Add wine; cook, scraping bottom of pot, for 1 minute. Return bacon and steak to pot with stock and tomatoes; boil. Reduce heat to medium-low; cook, covered, until steak is very tender, 2 to 3 hours.
—Remove steak, and shred; return meat to pot with olives, pimientos, capers, and vinegar. Cook until sauce is slightly thickened, about 30 minutes.
—Stir in cilantro and serve over yellow rice (see recipe, below).

Directions for Simplified Cuban-style Yellow Rice:
—Place 2 cups long grain white rice in a saucepan and add 4 cups of water. Stir in a ½ tsp annatto powder (also called achiote or Bijol), and 2 tsp salt if using.
—Bring the mixture to a boil over medium-high heat. Reduce heat to low, cover pan, and simmer.
—Cook until all the water has evaporated and the rice is tender, 25 to 30 minutes. Remove from heat, let sit five minutes uncovered, toss with a fork, and serve. 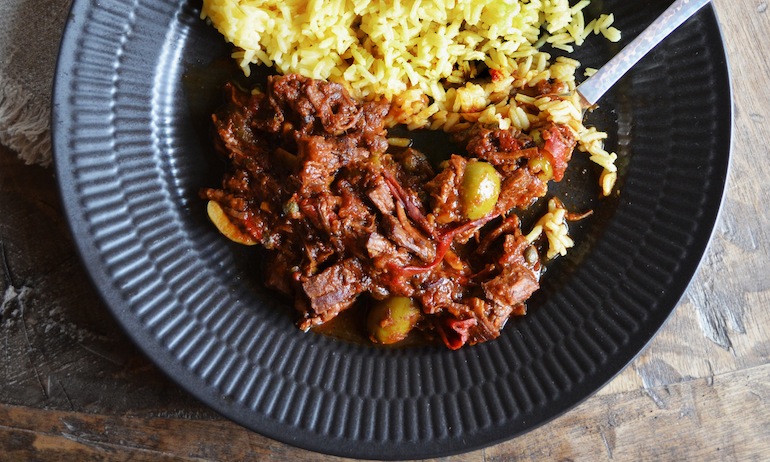