From the May/June, 2012 Cook’s Illustrated  (click here to view the recipe) 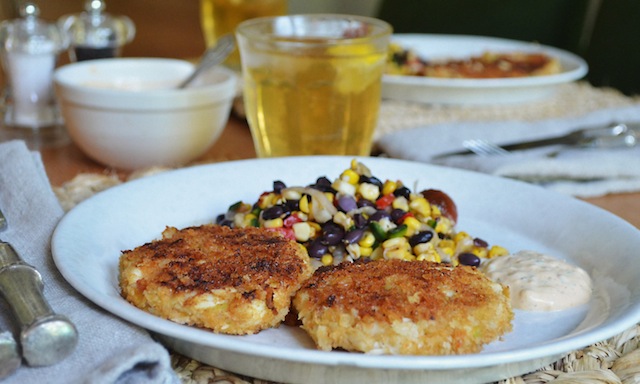 There are certain foods or ingredients I tend to stay away from, not because I don’t love them, but for the simple reason that they rarely if ever live up to expectation. Maybe if I’d grown up on a chicken farm I’d feel that way about eggs, but as a city boy the variety I find at the supermarket tastes much as I expect them to. Unfortunately, I can’t say the same about crabmeat. This is more or less the fault of my stepmother, Gerda, who, on my first trip to her family’s summer house in northern Maine when I was a kid, introduced me to fresh crabmeat (as in crabmeat that’s been removed from its shell that same day, versus the more common variety that’s frozen, thawed, and later sold as “fresh”) and, in the process, essentially ruined my chances for ever finding any future satisfaction in the shellfish. Even then (we’re talking the mid-1970s here) a small container of the sweet, flaky meat was expensive enough that it was viewed as something very special indeed, and shared with us kids only sparingly. So I did what any budding gourmand would do—I stole it out of the fridge. Still, my lingering impression is that I never got enough of the stuff. 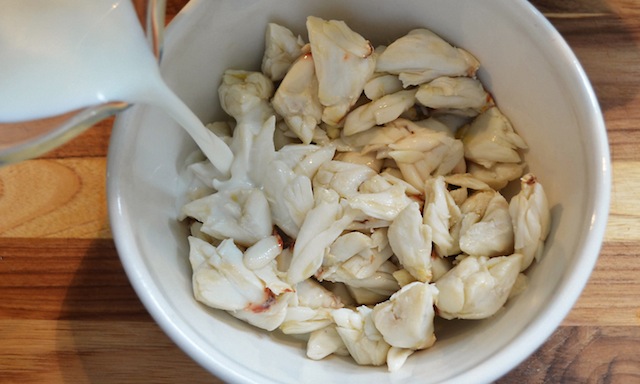 All this has created something of a paradox for me: the thing I could never get enough of as a child is also the thing that’s never good enough as an adult. Okay, I’m being overly dramatic here, but you get the idea. And here’s another thing—because the quality of that freshly caught Maine crabmeat was so high, it would have been viewed as a crime to do anything more with it than spoon it on a plate and eat it up with a little mayo (spiked with a bit of gin and mustard, as I recall). In other words, there was no place for cooking with crabmeat in this scenario, which is too bad, because the pleasures here can be mighty high as well. So I guess if there’s an upside for me to the inferior quality that’s generally available it’s this: I feel no qualms about baking it, frying it, or tossing it with something else.

Which brings me to this week’s recipe for that ultimate summer entrée—crab cakes. The recipe comes from the current issue of Cook’s Illustrated, and appealed to me for several reasons. First, it’s blessedly free of filler—the breadcrumbs, the eggs, the mayo used to stretch and bind the various ingredients present beneath the crab cake’s seductive, crackly exterior. What’s more (and this is the second reason for those of you counting), true to form the writers at CI found a way to address the principal failing of most any crabmeat that isn’t straight-from-the-shell fresh: namely an off-putting, slightly fishy odor. And third (and perhaps most importantly) they’ve devised a way of omitting the flavor-flattening fillers mentioned above while still fashioning a tidy crab cake that won’t collapse when introduced to a fork—this thanks to a secret ingredient that also serves as a stand-in for the subtle sweetness missing from all but the freshest crabmeat. All tolled, a pretty neat trick, no? 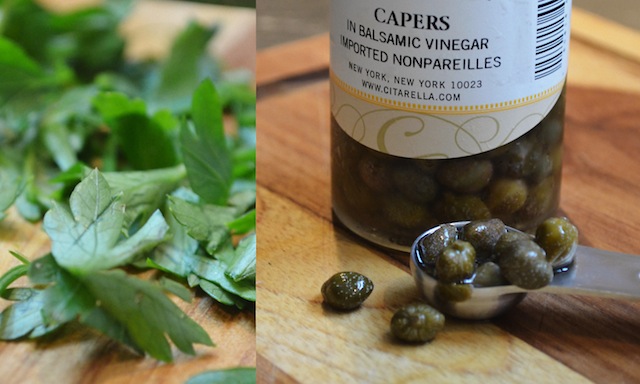 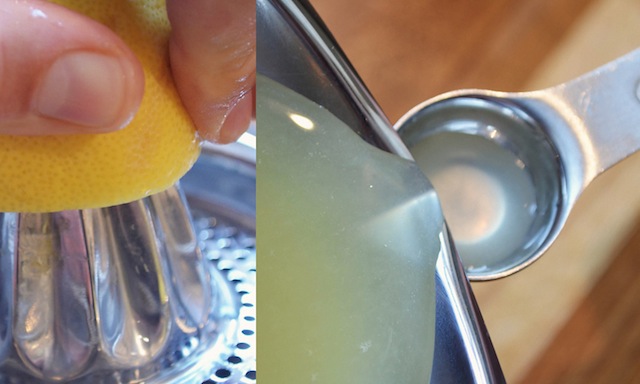 Let’s start with the recipe’s fishy odor fix, since it’s essentially the first step here—though clearly not one you need to take if you’re working with straight-from-the-shell crabmeat, or if yours simply happens to smell clean and fresh. Either way, it’s a good trick to know as the same technique can be applied to any number of strongly-scented foods (gamey lamb comes to mind). It’s a head-smackingly simple move, involving little more than letting the crabmeat soak in a cup of milk, covered and chilled, for twenty minutes, then gently removing the liquid by pressing the meat against a fine mesh strainer. In other words, give the offending ingredient a milk bath! And for what it’s worth, the finished crab cake was sampled by none other than my friend and frequent cooking companion, Dennis (that’s his thumb you see above)—a food enthusiast who rarely eats seafood of any kind due to a sense of smell that rivals my Labrador Retriever, Sid’s—and he picked up not a trace of fishy odor. (To underscore the point, he went on to eat three of the crab cakes, something I can assure you he would never do just to be polite!) 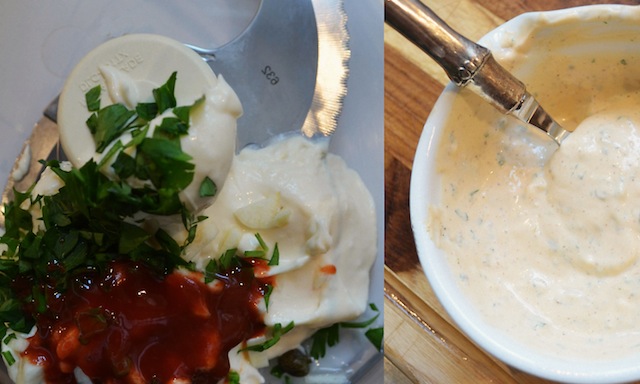 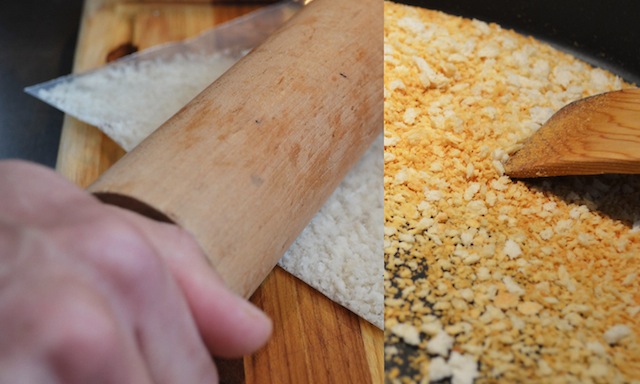 Of course, it didn’t hurt that the crab cakes were firm and bouncy, and had plenty of that mild, sweet flavor you look for in fresh crabmeat. This last quality was one noticeably absent when I first sampled the crabmeat (it kind of tasted like nothing at all), and one that I can only attribute to the recipe’s addition of a shrimp “mousseline”—a fancy word for what here is essentially four ounces of shrimp (peeled and deveined) that have been pulsed in a food processor along with a small amount of heavy cream—an addition that imbues the cakes with a quiet hit of sweetness while also binding everything together. That binding property is called into play almost immediately, as once pureed, the shrimp is transferred to a bowl and mixed with small quantities of previously pulsed celery, onion, and garlic that have been subjected to a quick sauté, then given twenty minutes or so to come to room temperature. And to this mixture is added the mustard, the hot pepper sauce, some lemon juice, and the all-important Old Bay seasoning (because, of course, it wouldn’t be a crab cake without Old Bay), before the crabmeat itself is introduced. And just to make sure the crab mixture maintains its shape when cooked, the formed patties (eight of them, each roughly a ½-inch thick) are placed on a parchment lined cookie sheet, covered, and refrigerated for a half hour to become fully firm. 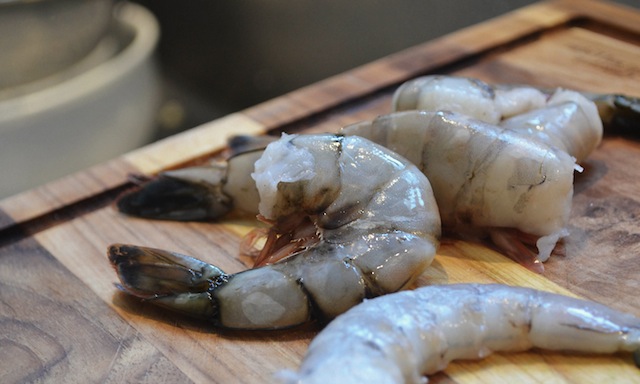 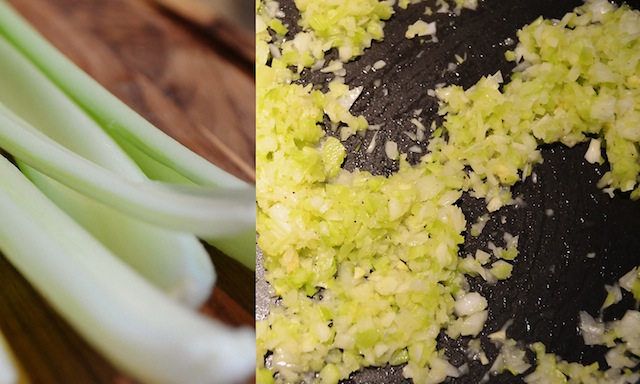 Once chilled, the cakes are coated with panko breadcrumbs that have previously been toasted over medium-high heat for five minutes or so. And because half of the crumbs were crushed with a rolling pin, you can rest easy that they’ll adhere to the cakes’ surface during the frying phase—key, as without them there would be none of that glorious golden brown shell that’s one of the undisputed pleasures of crab cake-eating. As for the cooking process itself, this is simple enough, though two things do bear emphasizing. The first is that you’ll want to fry the cakes in two stages (four at a time), as a crowded skillet will make the delicate process of flipping the cakes a particularly frustrating one (unless you flip with all the precision of a sharp-shooter at target practice, you’ll need some room to maneuver here). And to ensure that the cakes don’t fall apart when aloft, you’ll also want to tackle this with two spatulas instead of one, something that’s far less daunting than it sounds. Also, although the recipe doesn’t suggest this I found it’s best to keep the first four warm by covering them loosely with foil, since each batch takes about ten minutes to fry—critical moments in the life of a crab cake as they’re best eaten when still carrying some of the heat of that frying pan.

Served with a simple Remoulade Sauce made of mayonnaise, capers, and a few other ingredients (see recipe below) and you have the makings for a perfect summer meal—one featuring crab cakes that are sweet, moist, and with just the right amount of crunch. Of course, it goes without saying that you want to use the freshest, best quality crabmeat you can find, but if you don’t find yourself near a wharf in northern Maine and the straight-off-the-boat variety isn’t in the cards then the tips offered here go a long way to making sure you’ll end up with something very nearly as wonderful. 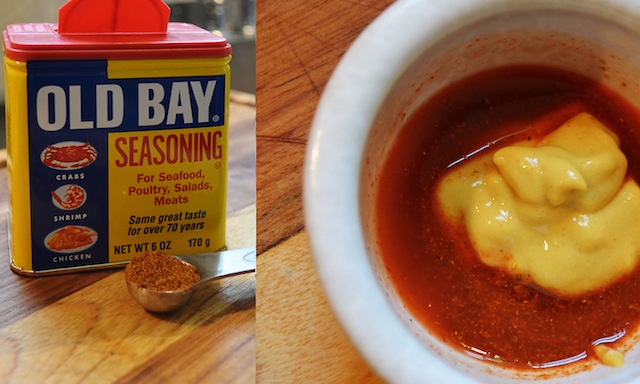 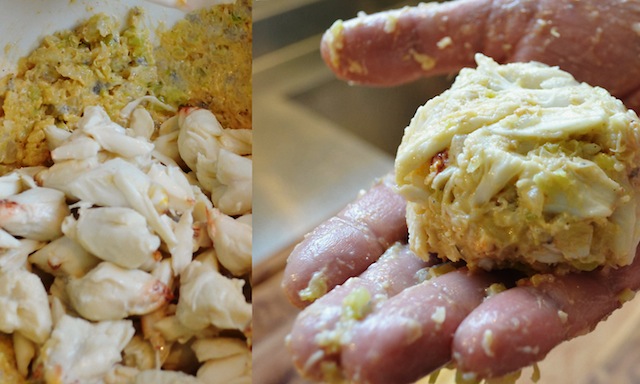 *NB. Technically this is the same thing as Tabasco, though because this brand is aged in wooden casks it may have a slightly different flavor than others labeled simply as “hot sauce.”

Directions for crab cakes:
—Place crabmeat and milk in bowl, making sure crab is totally submerged. Cover and refrigerate for at least 20 minutes.
—Meanwhile, place ¾ cup panko in small zipper-lock bag and finely crush with a rolling pin. Transfer crushed panko to 10” nonstick skillet and add remaining ¾ cup panko. Toast over medium-high heat, stirring constantly, until golden brown, about 5 minutes. Transfer panko to shallow dish and stir in ¼ tsp. salt and pepper to taste. Wipe out skillet.
—Pulse celery, onion, and garlic in food processor until finely chopped, 5 to 8 pulses, scraping down bowl as needed. Transfer vegetables to large bowl. Rinse processor bowl and blade and reserve. Melt butter in now-empty skillet over medium heat. Add chopped vegetables, ½ tsp. salt, and 1/8 tsp. pepper; cook, stirring frequently, until vegetables are softened and all moisture has evaporated, 4 to 6 minutes. Return vegetables to large bowl and let cool to room temperature. Rinse out pan and wipe clean.
—Strain crabmeat through fine-mesh strainer, pressing firmly to remove milk but being careful not to break up lumps of crabmeat.
—Pulse shrimp in now-empty food processor until finely ground, 12 to 15 pulses, scraping down bowl as needed. Add cream and pulse to combine, 2 to 4 pulses, scraping down bowl as needed. Transfer shrimp puree to bowl with cooled vegetables. Add mustard, hot pepper sauce, lemon juice, and Old Bay seasoning; stir until well combined. Add crabmeat and fold gently with rubber spatula, being careful not to overmix and break up lumps of crabmeat. Divide mixture into 8 balls and firmly press into ½”-thick patties. Place cakes on rimmed baking sheet lined with parchment paper, cover tightly with plastic wrap, and refrigerate for 30 minutes.
—Coat each cake in panko, firmly pressing to adhere crumbs to exterior. Heat 1 tbs. oil in now-empty skillet over medium heat until shimmering. Place 4 cakes in skillet and cook without moving them until golden brown, 3 to 4 minutes. Using 2 spatulas, carefully flip cakes, add 1 tbs. oil, reduce heat to medium-low, and continue to cook until second side is golden brown, 4 to 6 minutes. Transfer cakes to platter. Wipe out skillet and repeat with remaining four cakes and remaining 2 tbs. oil. Serve immediately, with lemon wedges and Remoulade Sauce (recipe below).

Directions for Remoulade Sauce:
—Pulse all ingredients except salt and pepper in food processor until well combined but not smooth, about ten 1-second pulses. Season with salt and pepper to taste.
—Transfer to a bowl and serve. 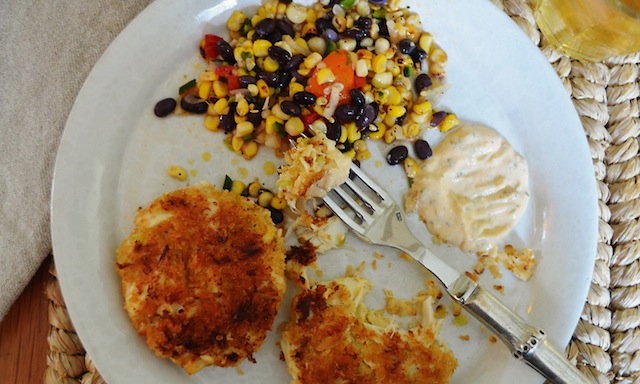