From Sunday Suppers at Lucgues (Knopf) 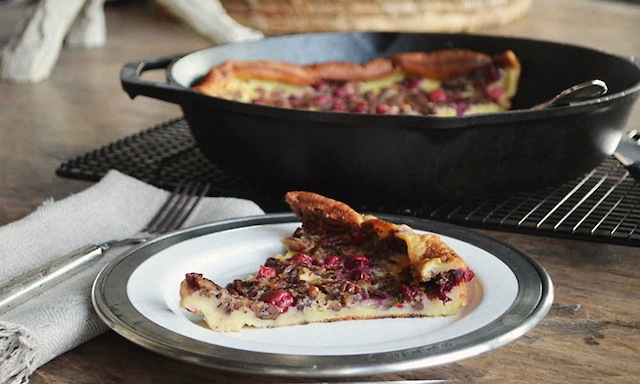 Several Sundays ago what had been planned as a simple meal at home for Alfredo and me turned into an impromptu dinner party for six—a last-minute gathering calling for that additional flourish known as dessert. Time was limited, though, and so I turned to one of my favorite dessert-in-a-pinch options: clafoutis. Let’s start by addressing that name, which most people aren’t familiar with, and which always makes me feel like an ass when it comes out of my mouth (instead I usually describe it as “a French pancake/flan-like thing,” which does a better job of summing up what it’s all about). The other thing to know is that the dish originated in the southwestern region of France (Limousin, to be exact), and was created as a kind of baked pudding to showcase the region’s summer cherries. All of which is great, except I’ve never actually made it with cherries, in part because I’m such a fan of the variety made with apples. For years that’s been my clafoutis standard, and one I would probably not have deviated from, except for the fact that I happened upon this recipe for a cranberry-walnut version in Sunday Suppers at Lucques (a great cookbook, by the way, for anyone not familiar with it). Now I’m not a huge walnut fan (in their raw form they make the back of my throat itch), but I do love cranberries and thought the combination had a festive, holiday quality to it. So I decided to mix things up a bit and give it a whirl, though with a few small alterations—namely fresh cranberries instead of dried, and pecans instead of walnuts.

The results were wonderful, with the chewy, airy cake offset by the mellow tang of the cranberries and the satisfying crunch of the nuts. That sponge-y quality is one of the pleasures of any clafoutis, and it’s on vivid display here, with the texture recalling that of a thick crêpe (as opposed to the density of a traditional pancake, or the slippery quality of a flan). And during its forty-five minutes in the oven, the dish turns a beautiful shade of honey-brown and puffs up like a Dutch pancake, which means that despite the cake’s appealing chew, it’s feather light as well. Having said that, like a soufflé this high-flying quality dissipates quickly (as my photos reveal; one must shoot fast to capture this dish in all its puffed-up glory), but the good news is that it’s just as appealing when it flattens out a bit. In fact, when chilled the cake takes on a denser, more custard-like quality, which is delightful, particularly in the company of the nuts and cranberries. I cut into the leftovers the next morning for breakfast and I couldn’t stop myself from slicing just a little more, then a little more still.

And, as intimated earlier, it’s a breeze to assemble, with most of the ingredients likely already lurking in the cupboard. To start you assemble the batter, first heating the milk along with two tablespoons of butter then whisking the results into a previously combined mixture of a ½ cup of sugar, ¾ cup of all-purpose flour (sifted), and a ½ teaspoon of kosher salt. Once everything is combined, this is set aside and allowed to rest for an hour or so—plenty of time within which to toast the nuts (ten minutes on a cookie sheet in a 375˚ oven), then to coarsely chop them. I should mention that as someone who typically avoids cooking with nuts, I was unprepared for the warm, homey smell that within minutes overtook the kitchen—a scent that was nutty (of course), but also a little sweet, like baking cookies. This was my first hint that we were in for something special. 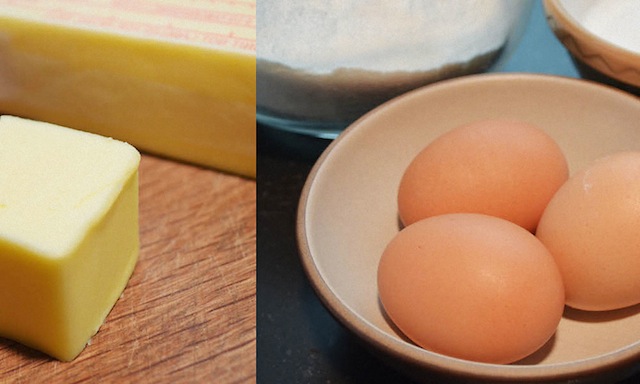 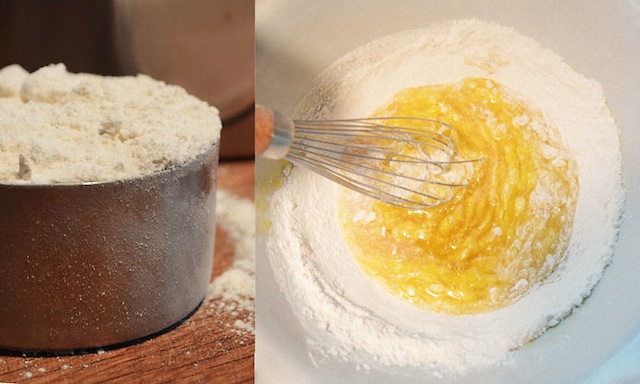 Once the batter has been given sufficient time to rest, pour it into a well buttered, ten-inch round baking dish (I like using a cast-iron skillet, for no other reason than it just looks so good), and scatter the ½ cup of cranberries and the chopped nuts on top. Forty-five minutes (or so) in a 375˚ oven is all it takes for the batter to take on a beautiful golden color, and to rise up out of its pan like a crown—just make sure there are no racks above the baking dish that might impede the clafoutis’ inflation.

The Lucques’ recipe suggests serving the dish with a dollop of whipped cream spiked with a little bourbon, though I prefer it without, letting the egg-y/fruity-y simplicity of the flavors take the spotlight without any distractions. (The whipped cream recipe is included below.) And in case you’re curious about that apple variety I mentioned at the outset, instructions for this are listed below, as well. Either way, this is a wonderful dessert—perfect for the colder months with the two varieties listed here, or for the warmer ones with fresh berries or those traditional Limousin cherries that started the whole thing. 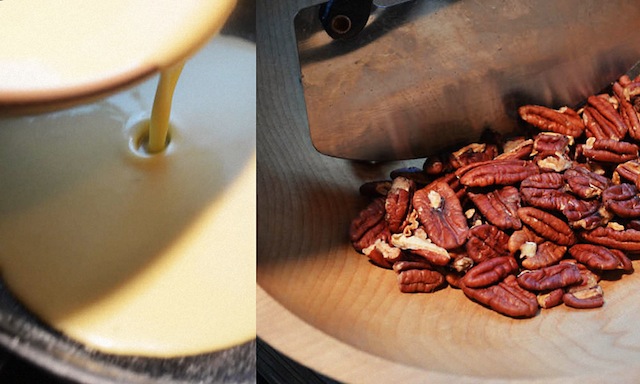 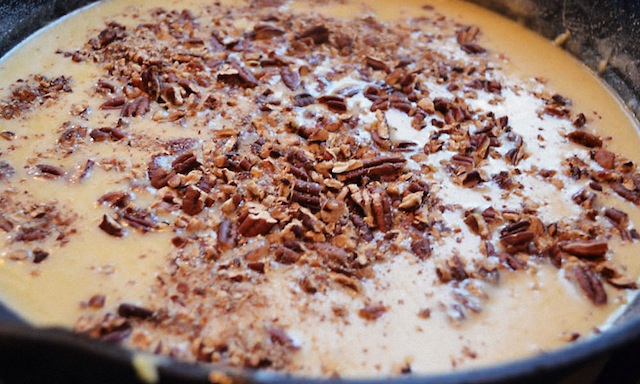 Note: For an apple version of the above, swap out the walnuts and cranberries for the following:
—4 tbsp butter
—4 tart apples, peeled, cored, and sliced
—1/2 cup plus 2 tsp sugar
—2 to 3 tbs brandy
—Ground cinnamon to taste 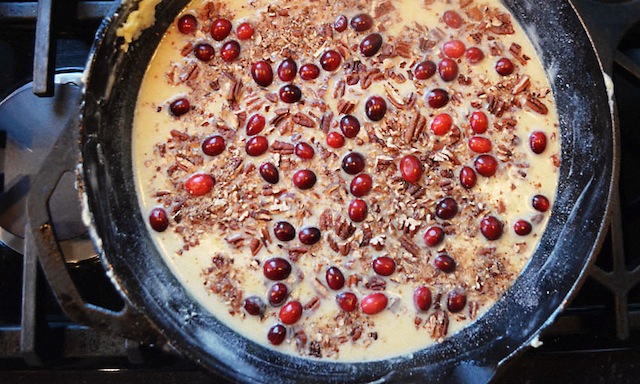 Directions:
—Heat the milk and 2 tbs butter in a small saucepan over medium heat until warm but not hot.
—In a large bowl, whisk the eggs together. Whisk in ½ cup sugar, the flour, and the salt. Add the warm milk, whisking well to incorporate completely. Let the batter rest 1 hour at room temperature.
—Preheat oven to 375˚.
—Spread the walnuts (or pecans) on a baking sheet and toast about 10 minutes, until they’re golden brown and smell nutty. When the nuts have cooled, chop them coarsely.
—Butter a 10-inch round or oval baking dish (TRG note: a cast-iron skillet is fine) with the 1 tsp butter. (You can also make six individual clafoutis if you like.) Sprinkle the remaining 2 tsp sugar in the dish, and tip to coat the bottom and the sides (TRG note: you might need a little more sugar to do this). Pour the batter into the dish. Scatter the nuts and cranberries on top (most of them will sink). Bake about 45 minutes, until the clafoutis puffs up and turns golden brown.
—While the clafoutis finishes baking, whip the cream and bourbon to soft peaks (if using).
—Serve the clafoutis directly from the baking dish, with the whipped cream on the side, if desired.

Directions for the apple version:
—Follow the directions above, up to the point that the batter is assembled and resting.
—Melt the 4 tbs of butter in a large skillet over medium-high heat. Add the apples, ½ cup sugar, and the brandy, and cook until apples are glazed and heated through, about 5 minutes. Remove from heat.
—Proceed with the original recipe as written above, substituting the cranberries and walnuts for the sautéed apples. 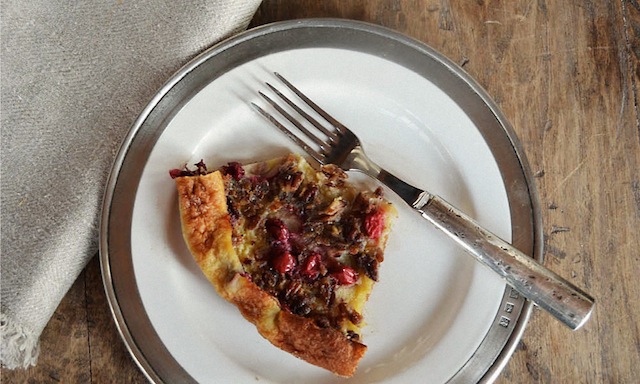