Adapted from the March, 2013 Food and Wine 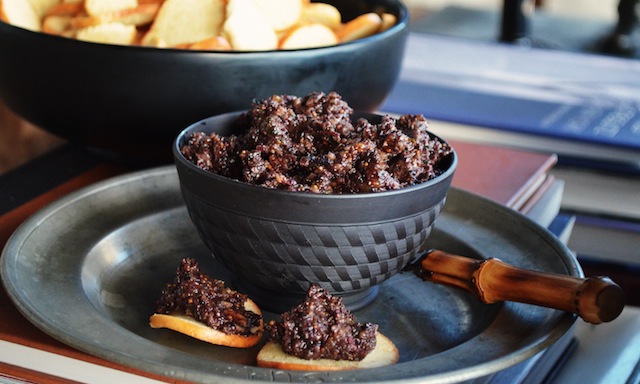 I’m not really one to complain about the weather. I grew up in Philadelphia, so winters that are cold, damp, and gray strike me as being part of the natural rhythm of things—the bargain you make for those warmer, sunnier months. This is actually a source of some conflict between Alfredo and me. As a child of Miami’s sunshine he tends to take cold, dreary weather personally; it seems wrong to him, and it makes him angry. And the fact that it doesn’t elicit that reaction from me can make him angry too. “Brad doesn’t mind the weather,” he’ll tell people. “He likes putting on a sweater” (as though this were some weird personal tick). I can only laugh, because he’s right—I do like putting on a sweater (even a knit hat, which can provide me with the fleeting impression that I’ve got my head on straight!). But the thing is my impulse to bundle up is less about a love of the cold than it is a tendency to soldier on and make the best of a less-than-ideal situation. Because like most of the world, I’d way prefer warmth and sunshine to cold and freezing rain. That said, even I, the sweater-lover, can’t help but check the weather report this time of year for signs of a warm-up—you see, I, too, have had just about as much winter as I can handle. It’s a shift that’s invariably reflected in the foods I’m drawn to as we limp towards spring, recipes such as this one for black olive tapenade. 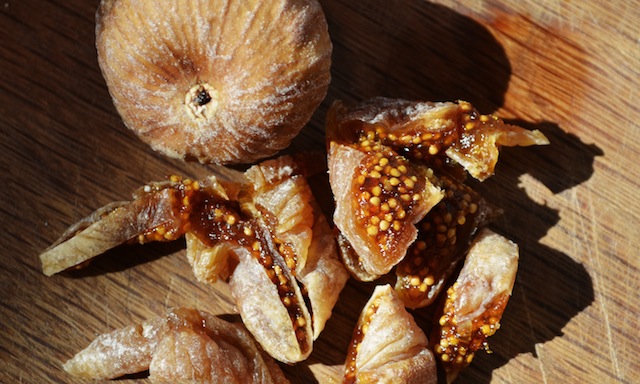 Is there any food that says sun and warmth as clearly as tapenade? Alright, I’m sure there are plenty, but tapenade—with its sunny, arid associations—is pretty high on the list. This version comes from none other than that maestro of French cooking, Jacques Pépin, who contributed the recipe to Food and Wine a number of years ago (the magazine reprinted it in their March issue, in honor of some anniversary or other). But here’s the thing that sets his version apart: in addition to all those brine-y black olives that are the mainstay of most tapenades, this recipe calls for the surprise appearance of dried figs and mint. That combination was too much for me to resist—because of its summery appeal for sure, but also because of the sweet/tangy flavor combination promised by the ingredients. 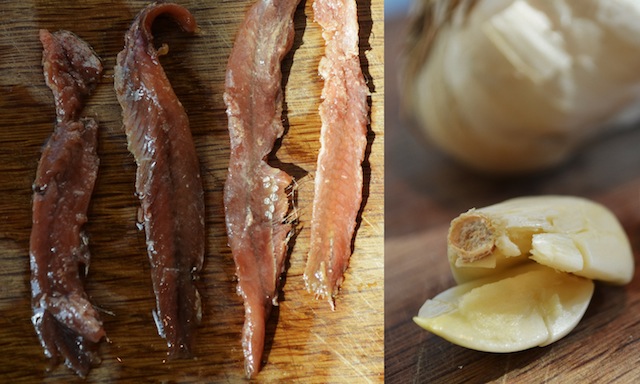 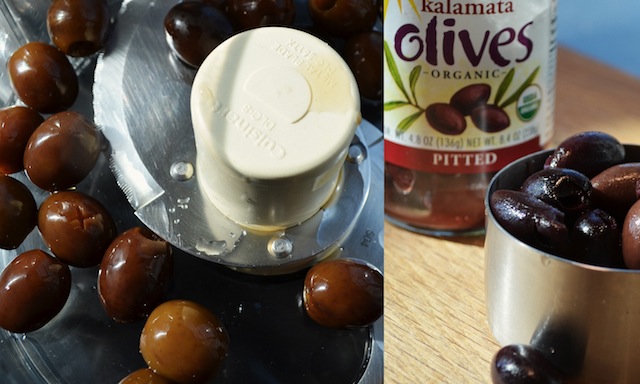 And, of course, this being a tapenade, there’s virtually no work involved in preparing it, unless you count measuring out a quantity of olives (a mix of kalamata and oil-cured black olives), mint leaves, and capers as work. Okay, there’s also a little bit of chopping involved (in the form of six small dried figs), and you do have to peel and crush two cloves of garlic. But beyond this all that’s required is placing the aforementioned ingredients into the bowl of a food processor along with some anchovy fillets and a quarter cup of olive oil, pressing the “pulse” button, and the “heavy lifting” is complete. Season with salt and pepper to taste, chill for half an hour, and you’re good to go—a concentrated shot of sunshine. And I mean that literally, as the individual flavors of the mint, the fig, and the olive come blasting through, even as they combine to produce a flavor all their own. 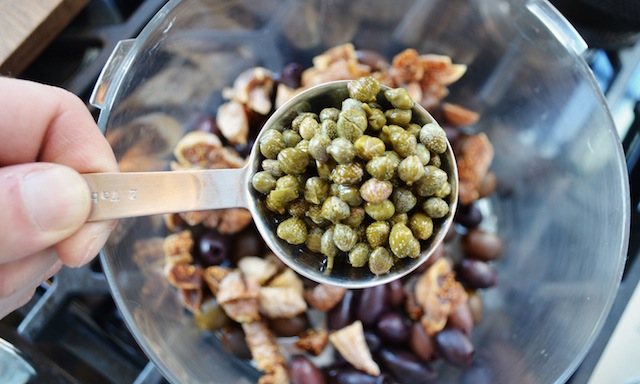 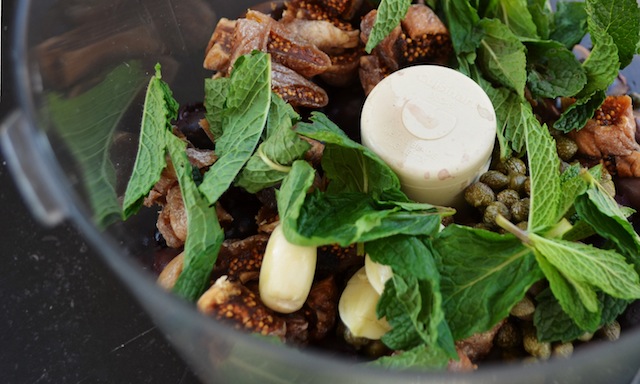 Having said that, depending on your fondness for garlic you might want to consider decreasing the number of cloves here from two to one; I’m a big garlic fan and I found the flavor a little too intense, though it’s possible I was working with a particularly strong variety. I would not, however, make the same recommendation for the anchovy. Even if you’re not a fan (and I know many aren’t), as with some salad dressings, in combination with the other ingredients the flavor here reads as salty/tangy and not fishy, so it’s an element you don’t want to eliminate or dial down.

And one final thought about serving: Pépin suggests spreading the tapenade onto bagel chips, and though their salty/crunchy quality offers a nice counterpoint to the sweetness delivered by the fig and the mint, my recommendation would be to go with homemade crostini instead. There’s a little more effort involved in this option, of course, but if you have the time and inclination, it’s an alternative that will offer the same crunch and salty satisfaction as the chips, but with that much more vibrant flavor. (A simple crostini recipe follows at the end of this posting). Still, go the easy route and tear open a bag if you must—truthfully, you can’t go wrong here.

P.S. That’s Lily in the image near the bottom—as you can see, she likes the sun, too (almost as much as her bone).

Directions:
—In a food processor, pulse the olives, figs, capers, garlic, mint, anchovies, and olive oil until the tapenade is thick and somewhat chunky. Season with salt and pepper.
—Transfer the tapenade to a bowl, cover, and refrigerate until chilled.
—Serve with bagel chips. (TRG note: Crostini would also be good here—maybe better. See directions, below).

Directions for crostini:
—Preheat oven to 350˚. Arrange baguette slices (about 1/4″ thick) on two large rimmed baking sheets; brush both sides generously with olive oil, and season with kosher salt and pepper.
—Bake until golden, about 15 to 20 minutes, rotating sheets halfway through.
—Serve immediately. (Store any leftovers in a resealable plastic bag; these are great even several days later… like a really good, thick-cut potato chip!) 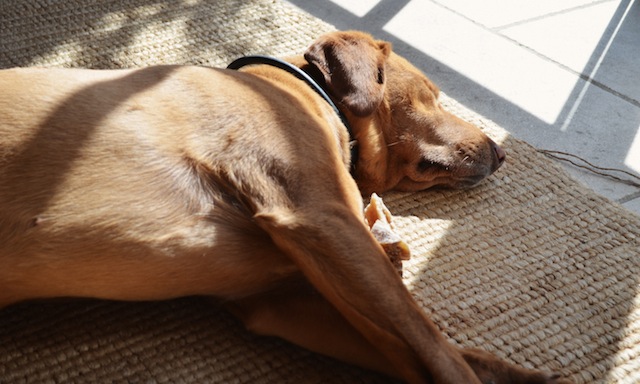 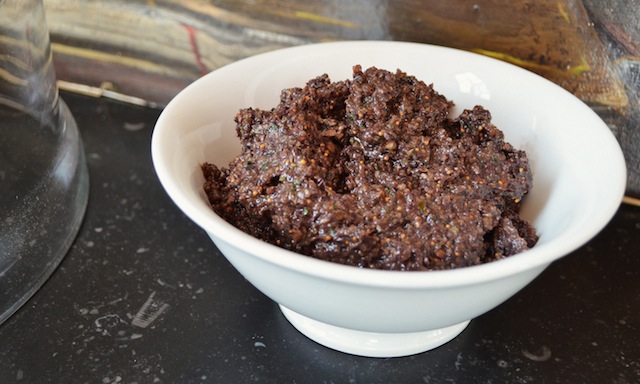