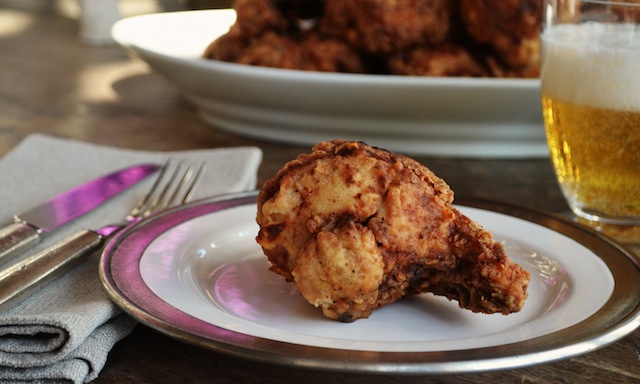 It felt like something special was in order for this, my 100th posting, and as luck would have it, the date aligned with another important milestone: the fortieth birthday of our good friend Dennis. I’ve mentioned Dennis often over the past few years, both because Alfredo and I spend so much of our time with him, and because he’s my partner-in-crime in so many food-related adventures (even though he hates olives). And so an idea was hatched—to throw Dennis a birthday dinner that would also celebrate this key moment in TRG’s life. The question was what to cook, since the 15 or so assembled guests were to include two vegetarians (who also can’t abide onions, tomatoes, or anything in the nightshade family), one individual who tries to maintain a gluten-free diet, another who hates cheese, and Dennis, who gets squeamish around seafood. In other words, this was not going to be an easy menu to assemble. For a few days there I was completely stumped. 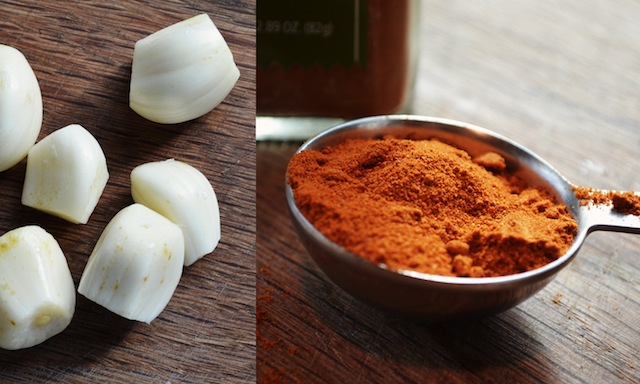 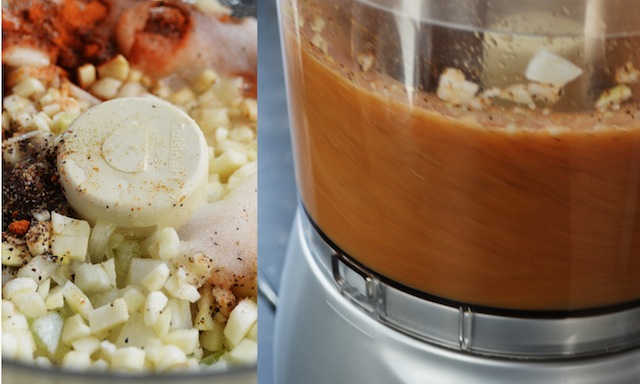 I should also mention that when it comes to planning a menu I aim for some kind of loose logic to the meal that will tie everything together—be it a region, a season, a holiday, what have you. Even if it’s an organizing principle that’s only apparent to me, it helps in my ability to put something together that feels balanced, so it wasn’t going to work for me to just throw a bunch of things on the table and call it dinner. But I had to start somewhere, and that starting point was presented by the two elements I was certain of: the appetizer (though I ended up adding a second one), and dessert. For the former I’d identified deviled eggs, simply because they always seem to make everyone happy, and because they embody springtime; and for the latter, the chocolate cake with vanilla icing from Billy’s Bakery, because it’s decadent and infantile—everything you could wish for from a birthday cake. With those two cornerstones in place I was able to construct a meal with a southern/soul food vibe. What’s more, it was a meal with enough elements that everyone would find something they could eat… but not with so many parts I wouldn’t be able to knock it out in a day. 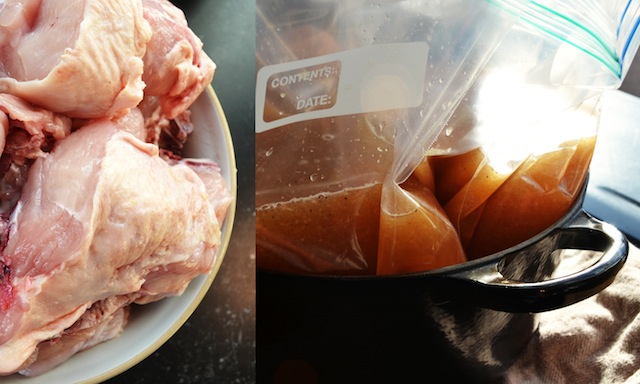 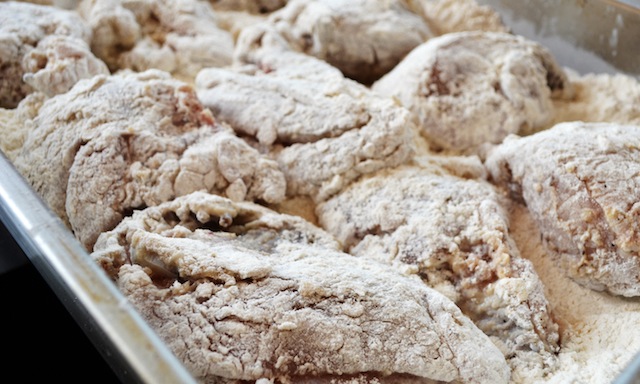 Here’s the menu I came up with:

With two exceptions, links to the recipes for all of these items (including the two previously featured on this site) are attached above and are identifiable by their red type-face. Not included are the recipes for the cake and the fried chicken, as the cake was purchased, and the fried chicken is the featured recipe for this posting and so follows my standard format (link at the top of the page and the typed recipe at end). Phew! Have I put you to sleep with all that information?! 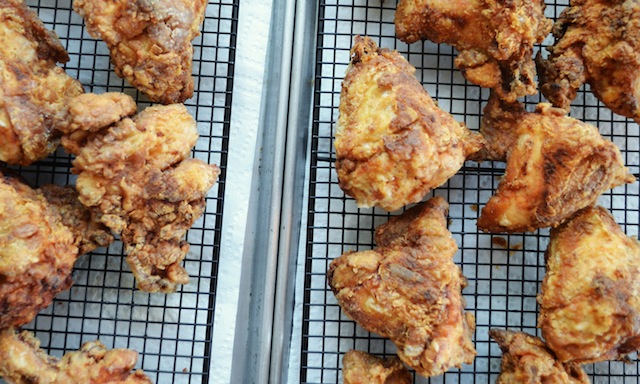 Well wake up, because this recipe is definitely worth adding to your arsenal! And, as someone who had never fried chicken before, it’s also a good deal faster and less messy than I would have guessed. In fact, other than the chicken taking longer to cook than the recipe indicated it would (almost double the time, as I was working with very large breasts), I racked up the most minutes during the early stages of the recipe—while making the marinade and cutting my pile of chicken breasts in half to allow for a more manageable size (something you won’t have to worry about if using smaller breasts or other chicken parts).

The marinade itself features a large quantity of onions, garlic, salt, pepper, and water, and although these elements imbue the chicken with a subtle zip, their more critical function is as a brining liquid, ensuring the meat stays juicy once cooked. In other words, if onions and garlic aren’t your thing, don’t be put off by their presence here; you’ll barely notice them in the finished product. Of course, you will need to factor in some time for the marinade to do its work—twelve hours at a minimum, or as much as a full day. So clear space in the fridge, and begin marinating the chicken the night before you start cooking. 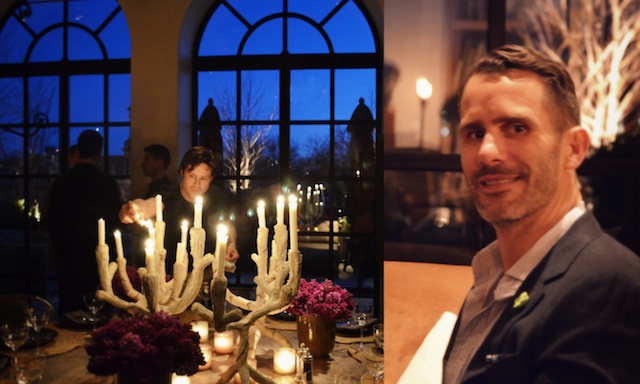 Once you’re ready to tackle the frying, the chicken can be removed from the marinade, dredged through a mixture of flour, salt (just a little this time), and black pepper and left to sit for twenty minutes or so, before being introduced to the hot oil. And by “hot” the recipe stipulates a temperature of 365˚, so you’ll want to have a candy- or deep-fat thermometer clipped to your pot so you can pounce at just the right moment. (The oil—enough to fill the bottom two inches of your pot—will take little more than 10 minutes to reach the desired temperature, a process that speeds up the warmer the oil gets, so keep a close eye on things.) At this point it’s just a matter of gently placing the chicken in the pot and turning it a few times until it’s golden brown on the outside and cooked through on the inside (which, despite the original recipe’s instructions, can take as little as eight minutes, and as much as fifteen). Remove from the oil, let drain on a cooling rack placed over a paper-towel lined baking sheet, and enjoy—either warm or at room temperature.

It bears mentioning that unlike the skillet my mom used for frying chicken when I was a kid, a cast-iron pot (such as a Dutch oven) cuts down dramatically on the oil spatters, which means less post-frying clean-up. Even so, a little extra effort would not be out-of-line for chicken this good. And while a fried chicken dinner may not be something you want to make a weekly habit, for a special occasion (a birthday, a 100th posting, whatever) I can’t think of a meal with the power to make people smile more broadly—something I attribute to its very summery associations. The night of our dinner may have been chilly (too cold to eat outside for sure), but even so the evening felt like an enthusiastic waving-in of longer days and warmer nights. Like the opposite of a rain dance. 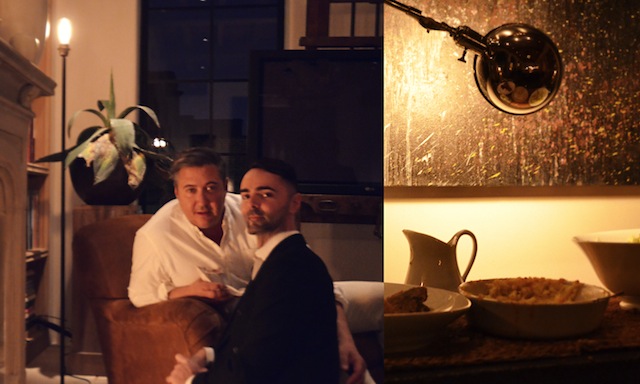 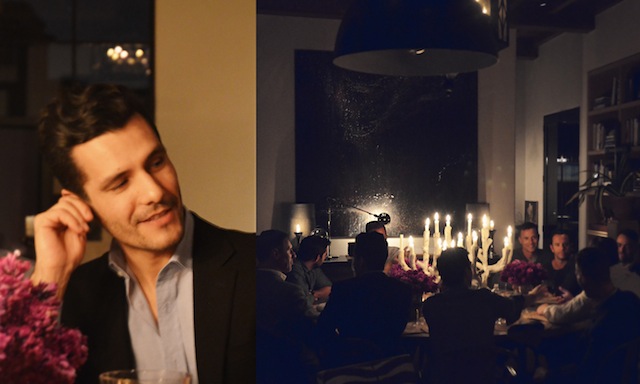 Directions for marinating the chicken:
—Purée onions and garlic with 1/3 cup salt, 1 tbs black pepper, cayenne, and 1 cup water in a food processor until smooth, then pour into a large bowl and stir in remaining 7 cups water.
—Divide chicken and marinade among 3 (1-gallon) sealable plastic bags, then seal, forcing out excess air. Place bags in a large bowl or pot in case of leaks.
—Marinate chicken, chilled, turning bags over a few times, for at least 12 hours, and up to 1 day. 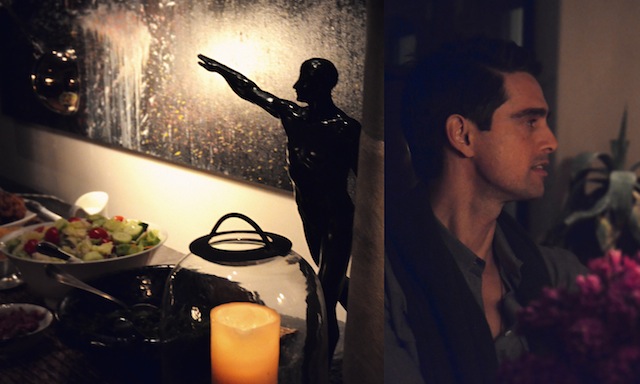 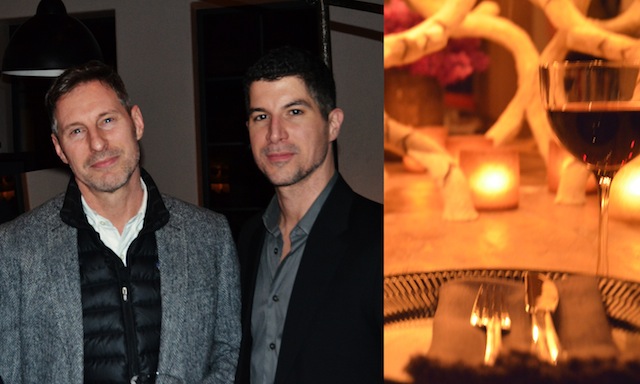 Directions for dredging and frying chicken:
—Whisk together flour, remaining 2 tsp salt, and remaining tbs black pepper in a large bowl, then divide between 2 large roasting pans.
—Drain chicken in a colander, discarding marinade, then dredge each piece of chicken in the seasoned flower and leave sitting in flour. Let chicken stand 20 minutes.
—Line 2 large baking sheets with paper towels and set a cooling rack on each. Preheat oven to 250˚. (TRG note: The chicken is equally good served at room temperature, an option that allows you to bypass the oven-related portion of this recipe).
—Heat 2 inches oil in pot over moderately high heat until it registers 365˚ on thermometer. Knocking off excess flour, transfer 4 or so pieces of chicken to oil (keep batches all white meat or all dark) and fry, turning occasionally with tongs, until golden brown and cooked through, about 8 minutes for breasts and 10 to 12 minutes for drumsticks and thighs. (TRG note: I was working with particularly large breasts and found between 12 and 15 minutes were necessary to cook fully).
—Lift chicken from oil with tongs, letting excess oil drip back into pot, then transfer to a rack, and keep warm in oven, if desired. Fry remaining chicken in same manner, adding oil as needed and returning the temperature to 365˚ between batches. 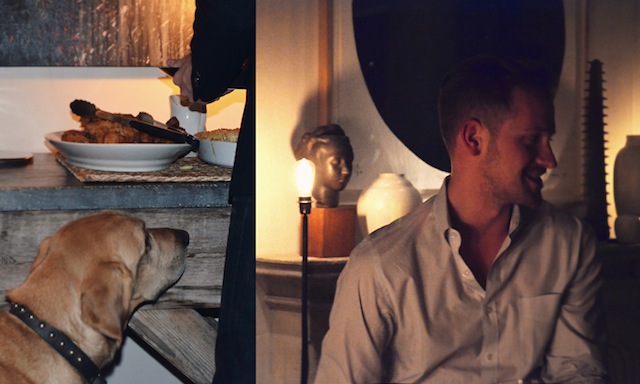 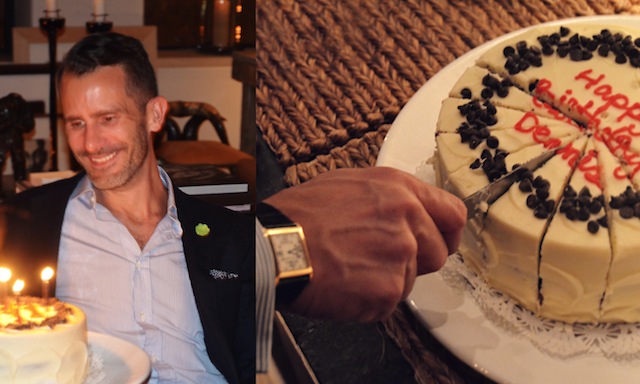 TRG’s note on disposing of cooking oil:
As someone who very rarely fries food, on those random occasions when I do I invariably find myself confused about what to do with the used oil (clearly pouring it down the drain, even if you have a garbage disposer, is a really bad idea). Here are a few helpful tips.
—Let the oil cool completely.
—Pour the oil into a large can or re-sealable plastic juice container.
—Freeze it.
—Throw it away once hardened.
—Alternately, you can also reuse it by straining the cooled oil through cheesecloth, pouring into a sealable container, and storing it in a cool, dark place until needed. 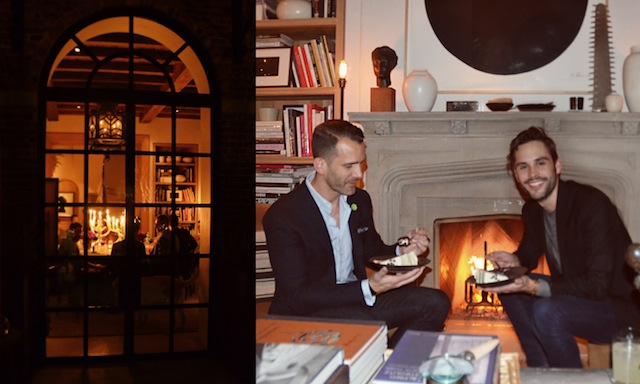