From the Feb., 2007 issue of Gourmet (click here to view the recipe) 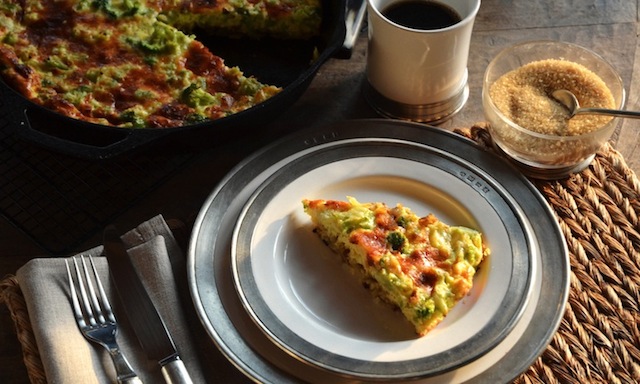 I love the idea of a big breakfast, even if I rarely eat one. Come to think of it, that might be why I love a big breakfast — because it’s not part of my ordinary weekday routine, and because it tends to be something I associate with weekends or holidays when the alarm isn’t set for 6:00 am, or when friends and family are staying over and don’t emerge from their darkened rooms until well past 10:00 am. Those are the times I can actually imagine wanting to eat something more than a bowl of cereal or a toasted bagel, particularly if everyone takes their time getting to the table, and the hour commonly allotted to breakfast gradually shuffles along towards lunch. Of course, in all likelihood that’s the exact opposite of the kind of morning most of us will be having this week, when the post-holiday period typically means starting your day like a bat out of hell. Still, I like it as an ideal to hold in our heads — a metaphor for the way I at least would like to think about the start of this new year, to say nothing of a fuzzy memory of the holidays still in the rearview mirror.

It’s also a good excuse to share with you this recipe I pulled from Gourmet several years ago, and one I tend to put to use a couple times each year, in a variety of scenarios not unlike those mentioned above. The magazine calls the dish a “broccoli and cheddar skillet flan,” which to my mind doesn’t do a very good job of describing the actual dish. I think it’s the word flan that throws me off, since I tend to associate flan with the baked custard dessert or with other things that are generally smoother in texture and with more of a jiggle to it than this dish has. In point of fact, a flan can also include foods such as quiche, which this does resemble (in other words, not smooth and with little to no jiggle), though technically not a frittata, which this item also brings to mind — perhaps more so than a quiche. 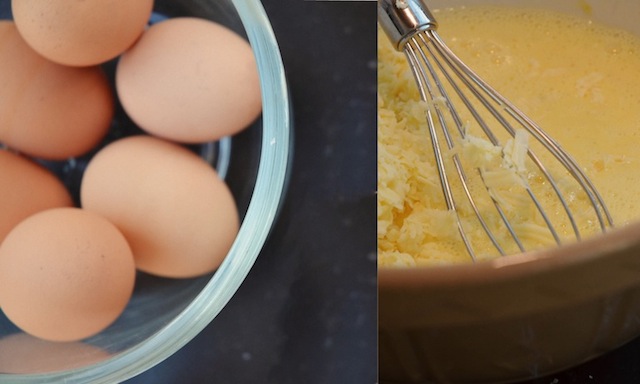 The principal thing to know is that it’s an egg-based dish that’s baked in a skillet, which automatically makes me think “breakfast” (even if eaten at noon), but that could also serve perfectly well as a light lunch or dinner. The other thing to note is that it comes from a section of the magazine called “10 Minutes Mains” — in other words, recipes for people in a hurry or who have other things they want to do than muck around in the kitchen all day. That said I’d argue that it takes slightly more than ten minutes to prepare, though not by much. Either way, it’s a fast, easy meal to assemble.

Key to this is the fact that the recipes suggests buying the frozen variety of two key ingredients: hash browns and chopped broccoli. Purists may be put off by this and, of course, there’s nothing to keep you from chopping and steaming your own broccoli, or from shredding your own hash browns, but I have to admit I like the convenience these shortcuts offer, especially when you consider the time and labor involved in making hash browns. And if it makes you feel any better, you still have to grate the cheese yourself — a big piece of Cheddar (as sharp as you can find) and a small hunk of Parmesan. There’s logic to this, of course, since the broccoli and the hash browns serve more of a textural role here (meaning frozen is less of an issue), whereas the cheese is key to the flan’s flavor (so buying the pre-grated variety would result in something that didn’t taste nearly as good). 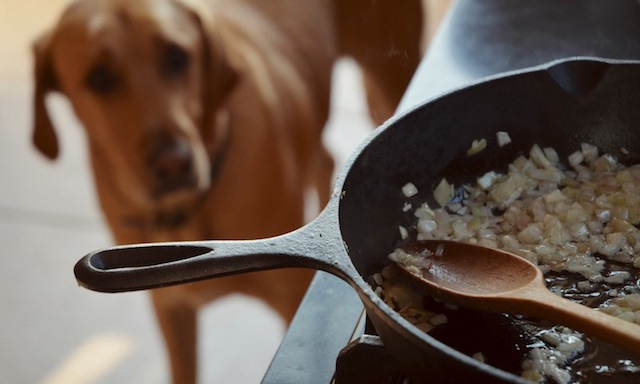 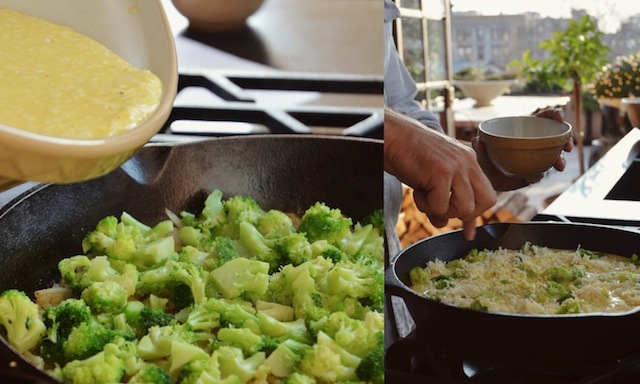 There’s also a chopped shallot sautéed in olive oil to enhance the flavors. Once this has had a chance to cook down and caramelize (about three minutes) the hash browns are added, along with a small amount of salt. This mixture is then given a few minutes in the pan (with an occasional stir), and later spread across the skillet and allowed to cook undisturbed for a short time — a move that gives it a chance to crisp up and form a kind of crunchy, buttery crust for the various ingredients to follow. Think of it as the reward at the base of each slice.

Next comes the chopped broccoli — scattered across the potato shallot mixture — then the eggs, which have been whisked together with the milk, pepper, salt, a small amount of nutmeg (the perfect foil for all that eggy richness), as well as the grated Cheddar and a small portion of the Parmesan cheese. The remaining cheese is then sprinkled across the top, and the whole thing is slipped into a 375-degree oven to bake for 12 minutes or so, or just until the edges start to set but the center is still a little loose. Five more minutes under the broiler to puff up (ah, the wonders of cheese) and to turn a golden brown, and you’re ready to eat.

A few quick comments about the ingredients: since, as mentioned above, much of the flavor here is derived from the cheese, the finished flan will only be as good as the quality of the Cheddar and the Parmesan you use, so go for the freshest and sharpest you can find. (Skimp and you’ll end up with something that borders on the bland.) Also, despite the enticing presence of all that cheese, the finished product is more eggy than it is cheesy, so if you’re expecting that first forkful to trail strands of melted Cheddar, better recalibrate your expectations. The cheese adds plenty of moisture and flavor, but a gooey cheese omelette this isn’t. Still, whatever your feelings about melted cheese, this baked egg dish (flan, frittata — take your pick) makes for a perfect slow start to the day . . . and the year.

Directions:
—Put oven rack in middle position and preheat oven to 375 degrees.
—Whisk together eggs, milk, pepper, nutmeg, and ¼ tsp salt until combined, then whisk in Cheddar and 3 tbs parmesan.
—Heat oil in a well-seasoned 10-inch cast-iron skillet over moderately high heat until hot but not smoking, then sauté shallot, stirring occasionally, until browned (about 3 minutes). Spread potatoes evenly in skillet and cook, undisturbed, 2 minutes. Remove from heat and spread broccoli over potatoes, then pour in egg mixture. Sprinkle with remaining parmesan. Bake until set 2 inches from edge but still slightly wobbly in center, 12 to 15 minutes. Turn on broiler. Broil 4 to 5 inches from heat until top is set, puffed, and golden brown.

Note: “Seasoning” or “curing” is the process by which a cast-iron skillet takes on nonstick properties. If you’re starting with a new skillet, wash it in hot water with a mild soap to remove the anti-rust coating, then dry by reheating on the stovetop. Once completely dry, coat with a 1/4 cup of lard or a comparable amount of cooking oil, then place in a 200 degree oven for three hours. This slow bake allows the grease to penetrate the skillet and will turn it a shiny black that tells you it’s been cured. Once cool, wipe down, repeating this final step a few hours later. Keep in mind that even a well-seasoned skillet needs to be re-seasoned every few years, though frying up the occasional slab of bacon never hurt either (that’s right, people — a reason to eat more bacon!). 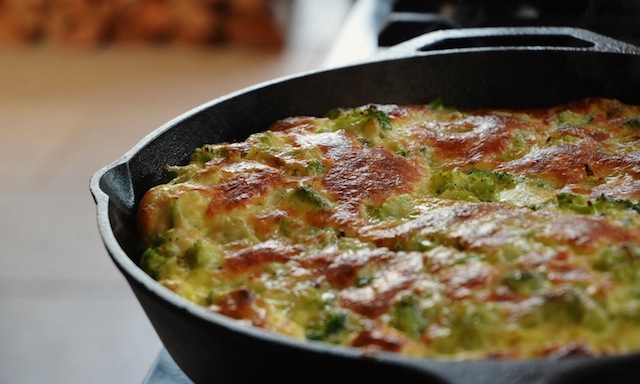