Adapted from the March, 2013 Bon Appétit 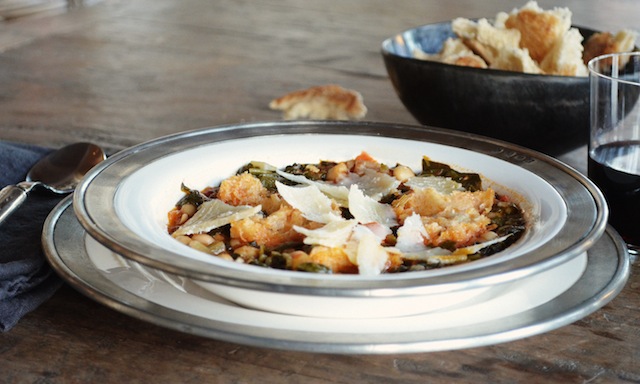 Last month I attended a friend’s birthday dinner, and seated to both my left and my right were vegetarians. Ten years ago I could count on one hand the number of people I knew who had eliminated meat from their diet, and now I was surrounded by them! Of course, the same scenario could just as easily have occurred in the ’90s. But the chances of its happening today are far greater—for the simple reason that being vegetarian has caught on. And caught on to the point where it’s no longer exotic or even notable. As someone who likes to feed people, this change is something I’ve been increasingly aware of, since more and more friends sitting down at our table are vegetarian. Though I may eat less meat than I used to (especially red meat, which seems to slow me down), I’m still most definitely a carnivore, so coming up with a meat-free menu that I’m excited to cook and eat is a frequent challenge these days. 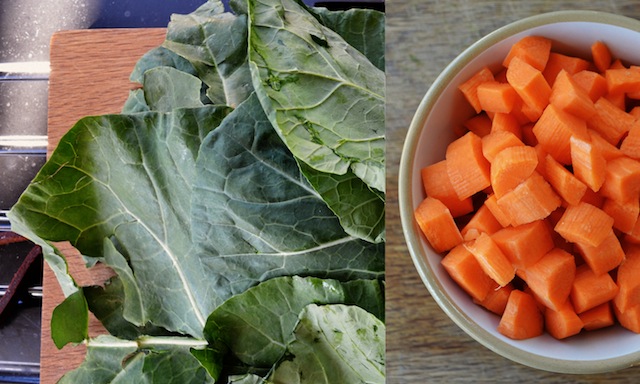 I say “challenge” because eliminate meat from a meal and I tend to fear it will have no flavor, and (even worse) that I’ll end up leaving the table hungry. To my limited way of thinking, no meat equals no fun, and even though I know that’s just plain wrong, this tends to be my automatic response where vegetarian cooking is concerned. Which is one reason I was so glad to come across this vegetable stew recipe (an Italian vegetable stew, to be precise—so called for the presence of ingredients such as crushed whole tomatoes, red pepper flakes, olive oil, and Parmesan cheese), and why I was even gladder to have made it. Finally, a dish to rid me of my vegetarian bias! And even better, a vegetarian-friendly option I could get excited about cooking for people who also eat meat! In other words, we’re talking life-changing stuff here.

The recipe comes from Brandon Jew of San Francisco’s Bar Agricole (by way of the March, 2013 issue of Bon Appétit), and has a number of things going for it that got my attention. For one thing it just looks amazing—packed as it is with an array of colorful vegetables (kale, collards, carrots, to name a few) that can’t help but draw the eye of even the most committed carnivore. What’s more, the featured ingredients include a large quantity of cannellini beans, along with six cups of dried sourdough bread chunks, so the possibility of ending the meal still hungry is exactly zero. Add to this a handful of Parmesan cheese shavings and a drizzle of olive oil—both introduced just before serving—and you have the sort of flavor combination that’s hard to beat.

Like most stews this one benefits from being made a day or so in advance, though if your schedule won’t allow for that, it’s still plenty good if eaten as soon as assembled (a process that takes little more than a few hours, including the time needed to dry out the bread). In fact, much of the preparation is fairly passive, with the last 50 minutes allocated to simmering the various ingredients (minus the bread and cheese, of course). The exception to this is the preparation of the vegetables—which in the case of the collards and the kale require de-stemming and par-boiling prior to chopping, both of which are fairly speedy. But once everything has been peeled and cut down to its appropriate size, all that remains is some pouring and stirring. 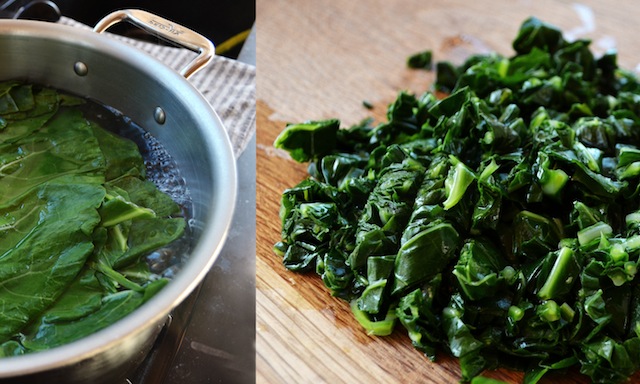 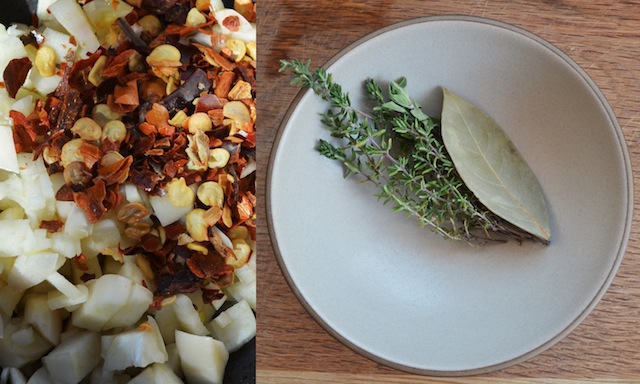 Included in this pouring and stirring is a large can of whole tomatoes, which once added to the pot are crushed by hand—an addition that brings some important acidity into the mix, not to mention a chunky textural component. I mention this because I used a can of the pre-crushed variety instead (for no other reason than it happened to be sitting in the cupboard), and while the flavors didn’t suffer from the swap, I did find myself wishing for larger, less uniform chunks of tomato. So stick with the instructions and go with whole tomatoes if you can.

Also, since the Parmesan shavings and drizzle of olive oil are literally the crowning glory on top of this stew, be sure to use the best quality of both you can get your hands on; it will literally make all the difference in the final tasting. I happened to have excellent examples of both on hand (in fact, a Sicilian friend had just given us a really first-rate bottle of olive oil, which was perfect for the finishing touch here), though even without these enhancements this is one of those dishes I’d probably keep thinking about anyway. As it is, I’m just waiting for the right moment to make this stew again—a definite first for me where anything “vegetarian” is concerned.

And one final thought: If you plan to eat the stew over a series of days, consider mixing just a portion of the prepared bread chunks into the amount of stew you think likely to be eaten. (Don’t do this, and those otherwise appealing leftovers will feature clumps of sodden bread.) Or skip this issue entirely and, instead of mixing in the torn bread, top the stew with homemade crostini (see last week’s posting for an easy recipe). 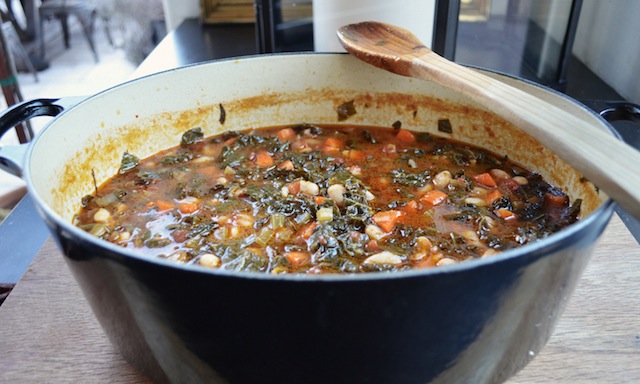 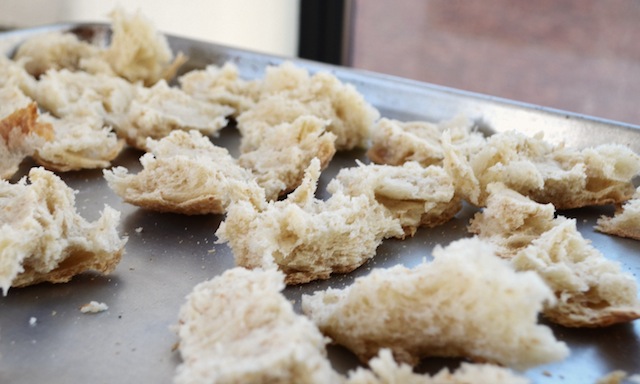 Directions:
—Scatter bread on a rimmed baking sheet in a single layer. Let stand at room temperature to slightly dry out, about 2 hours.
—Working in batches, cook collards and kale separately in a large pot of boiling salted water until slightly softened, about 3 minutes per batch. Rinse to cool. Squeeze out excess water; roughly chop. Set aside.
—Heat ¼ cup oil in a large heavy pot over medium heat. Add carrots, celery, and leek; stir until softened, 8 to 10 minutes.
—Add garlic and red pepper flakes. Cook, stirring until fragrant, about 1 minute. Add tomatoes, crushing with your hands as you add them. Cook, stirring frequently, until liquid is evaporated and tomatoes begin to stick to the bottom of the pot, 10 to 15 minutes.
—Add broth, beans, thyme, marjoram, bay leaf, and reserved greens; season with salt and pepper. Bring to a boil, reduce heat, and simmer until flavors meld and soup thickens slightly, 40 to 50 minutes.
—Just before serving, gently stir bread and ¼ cup oil into soup. Divide among bowls, top with Parmesan, and drizzle with oil.

NOTE: Soup can be made 2 days ahead. Let cool slightly; chill until cold. Cover and keep chilled. Reheat before continuing. Store bread airtight at room temperature. 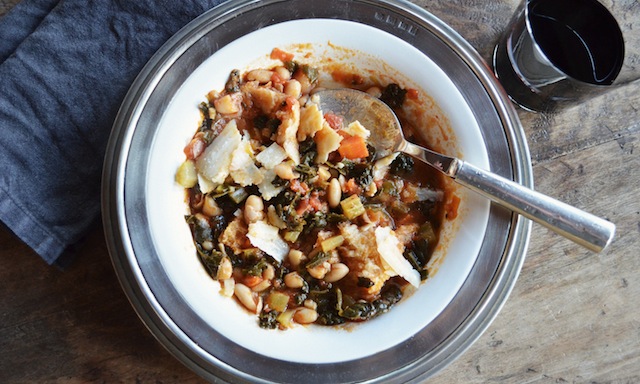