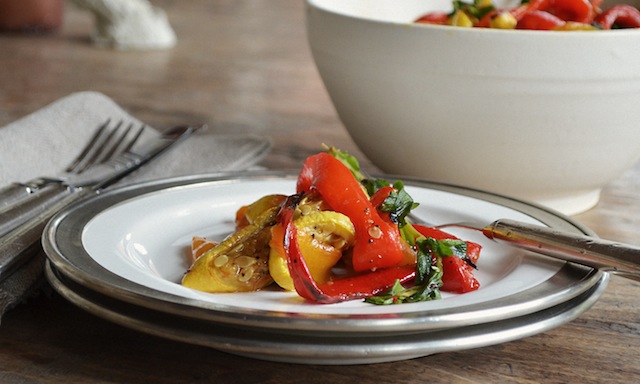 It’s funny, but as much as I like eating vegetables (I do, I really do!) when it comes to selecting recipes for this site they’re just about the last thing I want to make. For one thing, my preferred method of preparation typically involves little more than steam, fresh lemon juice, and a lot of butter, which doesn’t exactly make for the most useful posting. And for another, muffins, pasta, a big leg of lamb (or the like) are just so much more fun to play with. Or maybe they just produce better pictures… I don’t really know what the issue is here, though I do know that I rarely see vegetable preparation recipes that make we want to deviate from my standard. It’s something I’ve vowed to try to correct, in part because of the new dietary focus in my household (see last week’s posting), but also because I know that so many of you are vegetarian, or at least are making a concerted effort to draw more heavily from the vegetables and legumes categories than from meats and grains. I want to support that (it’s good for you and it’s good for the planet!) and I also want to challenge myself to do something a little more exciting with vegetable that doesn’t require melted cheese or breadcrumbs. 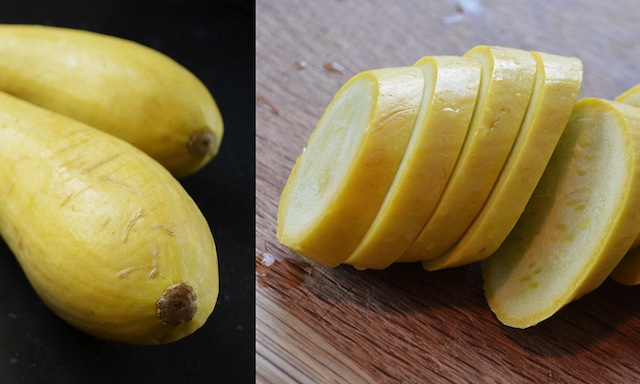 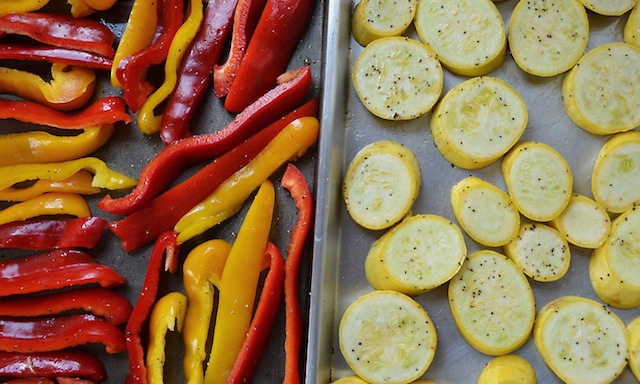 Which should explain why this recipe for marinated summer vegetables spoke to me. It comes from a picnic story in the current issue of Bon Appétit, and though I’m sure the dish would be terrific in the company of a roast chicken and a white bean tapenade (as the magazine suggests) spread across a rustic blanket under a shady tree somewhere, it’s just as good on its own, enjoyed at your kitchen table, or in front of the TV, or wherever you typically eat your meals. Okay, I may have added a slice or two of herbed goat cheese just to ratchet up the excitement level (the smooth tang of goat cheese works well with the flavors of the vegetables), but the point is this is a vegetable preparation that can stand on its own, and doesn’t require lots of less than healthy additions to get it there. 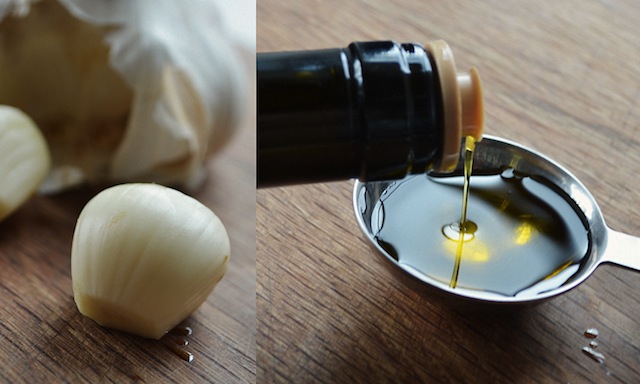 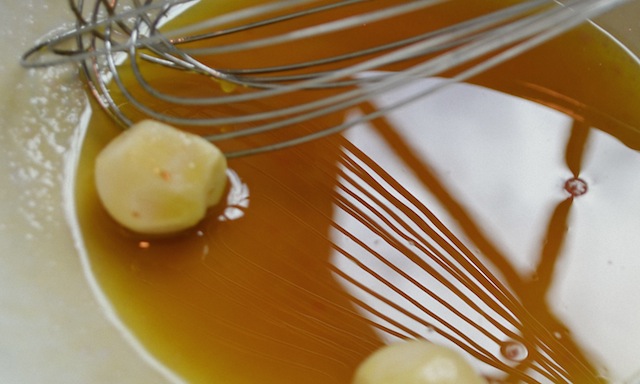 Did I mention it’s easy? Well, it is—with the exception of one small step that calls for removing the blistered skins from the roasted pepper slices. This is perhaps one of my least favorite kitchen tasks but the end result is worth it, so take a deep breath, make yourself comfortable, and be grateful you’re only dealing with the skins of just three peppers, which honestly isn’t a lot. And there are a few things you can do to make the process less tedious. For one, put down your knife and let your hands do the work, as your fingers will be able to pull back the skins much more effectively than any knife can. And for another, tackle the job when the peppers are still warm to the touch, as the skins are less inclined to release once they’ve cooled off. 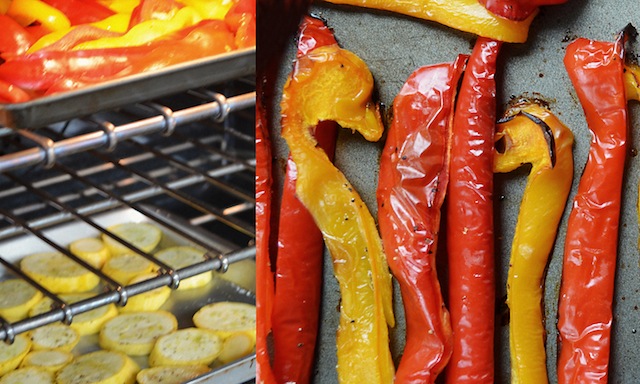 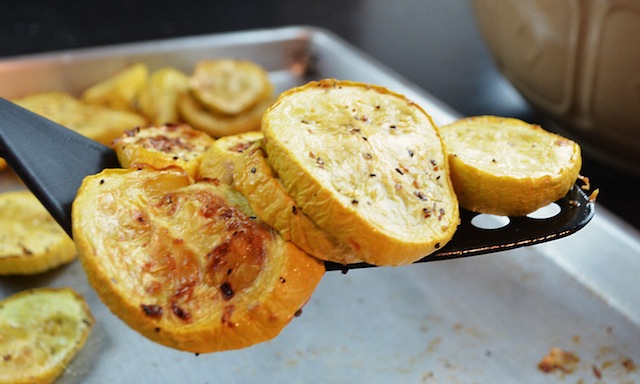 In fact, assembly for the entire dish—which involves nothing more than tossing a simple vinaigrette of garlic, olive oil, and sherry vinegar with a mix of roasted summer squash (or zucchini), those peppers, and a few sprigs of fresh oregano—is best accomplished when all of the vegetables are still warm, as they will absorb more of the dressing’s flavor at this stage. And that, of course, is the point, since the garlic, olive oil, and vinegar is being added for the simple purpose of dialing up the flavor quotient. That said, the finished result if less one of zip and bite than it is a subtle framing—and accentuating—of the vegetables’ natural flavors. In other words, just the sort of bright, snappy combo you’re after on a warm spring or summer night. 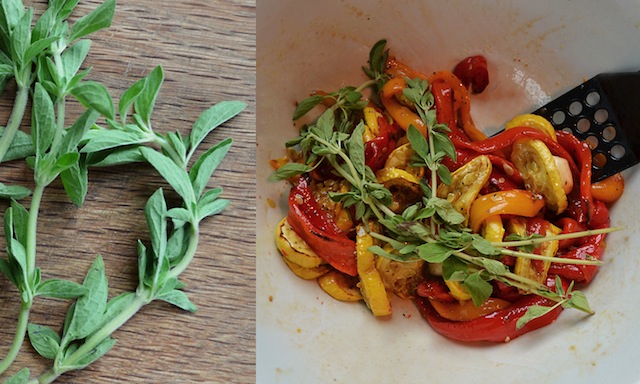 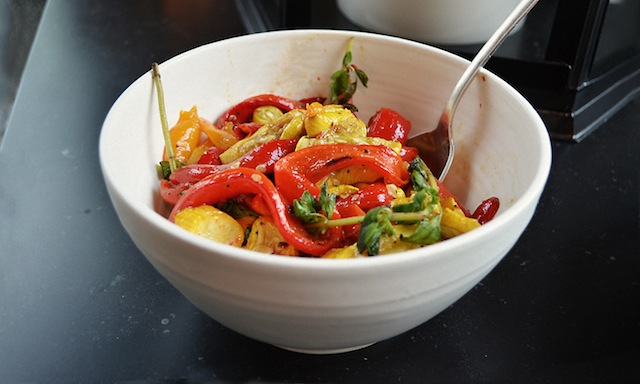 Directions:
—Place racks in upper and lower thirds of oven; preheat to 475˚. Place squash and peppers on separate baking sheets. Drizzle each sheet of vegetables with ½ tbs oil, season with salt and pepper, and toss to coat. Spread out in a single layer, turning peppers skin sides up.
—Roast peppers on upper rack and squash on lower rack, turning squash once, until tender, 15 to 20 minutes. Let cool slightly; remove skins from peppers. (TRG note: skins will come off more easily if done while peppers are still warm.)
—Whisk garlic, vinegar, and remaining 3 tbs oil in a large bowl; season with salt and pepper. Add vegetables and oregano; toss to coat.
—Cover and let sit at least one hour.

—Note: Vegetables can be made 3 days ahead. Cover and chill; bring to room temperature before serving. 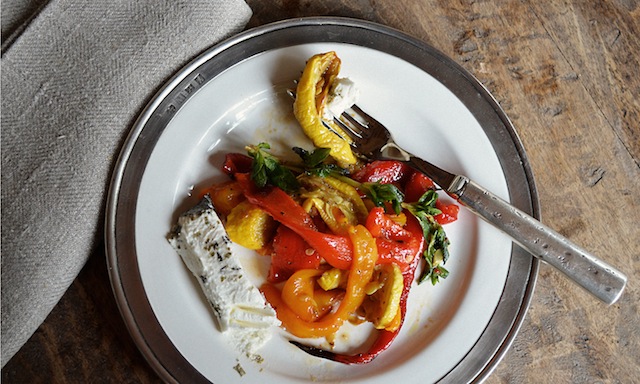