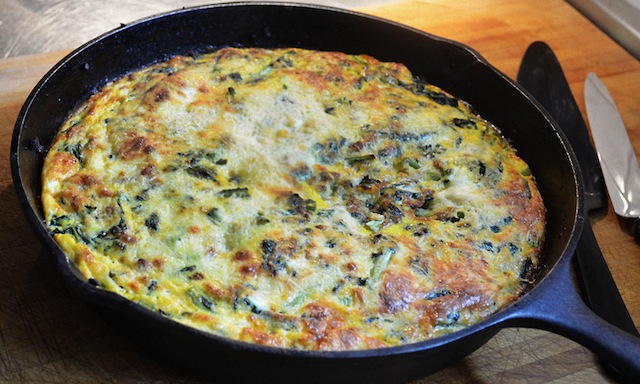 Unlike summer when my idea of the perfect breakfast is a bowl of Grape Nuts buried under a mound of fat blackberries, something about the arrival of fall puts me in the mood for a more substantial start to the day—the sort of meal that could power me through a game of touch-football if I was ever inclined to do such a thing (which, of course, I’m not). For that reason, and because Alfredo and I are still trying to steer clear of flour and grains (though I did eat some couscous last night; it arrived with my dinner and I couldn’t resist), the attached frittata recipe jumped out at me, insisting I give it a try. That in and of itself was surprising, since as a rule I’m generally not much of a frittata fan. For one thing I prefer my eggs on the wet side—a quality that by its very nature a frittata can’t deliver—and for another, the dish has always struck me as a little played-out… the sort of thing you see on a menu and then glaze over. But this version had a few things going for it that got me excited, namely chorizo sausage, broccoli rabe, and grated cheddar cheese (which I swapped out for Manchego; more on that later). 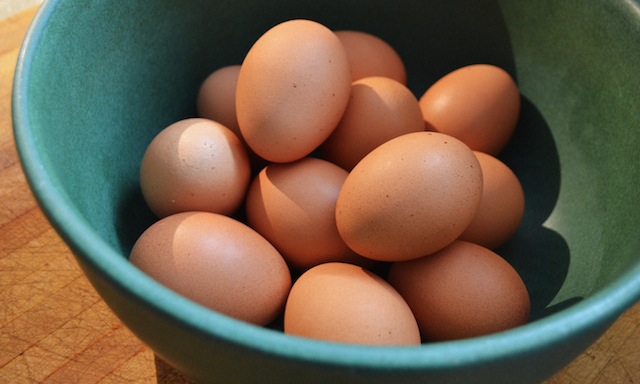 Really it was the broccoli rabe that grabbed me initially, since I’ve been having a love affair with this leafy green for the past few months. I’m not sure why it took so long for me to warm to its charms, but now that I have I can’t get enough of its slightly bitter flavor, or with the way it lends itself to so many of the things I love—namely garlic, olive oil, and, of course, sausage. In fact, one of my favorite weeknight dinners of late has been sautéed broccoli rabe with chunks of hot Italian sausage, an idea that came to me as I was picking through a friend’s unfinished dish of Cavatelli Pugliese and discovered it wasn’t the pasta that interested me so much as the bits of sausage and strands of tender broccoli rabe that are the noodles’ co-stars. So here was a breakfast dish that combined those same two enticing ingredients, but wrapped them in an airy egg mixture, not to mention a glaze of salty cheese. In other words, what’s not to love? 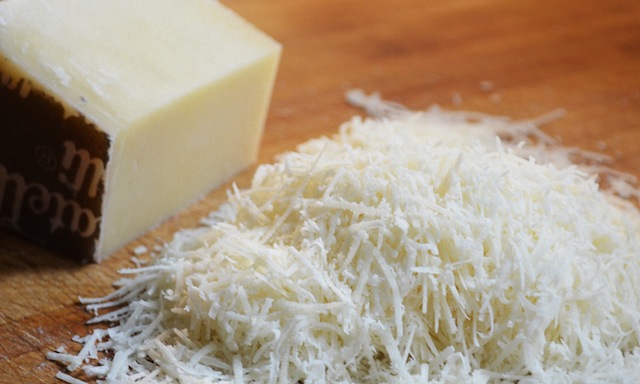 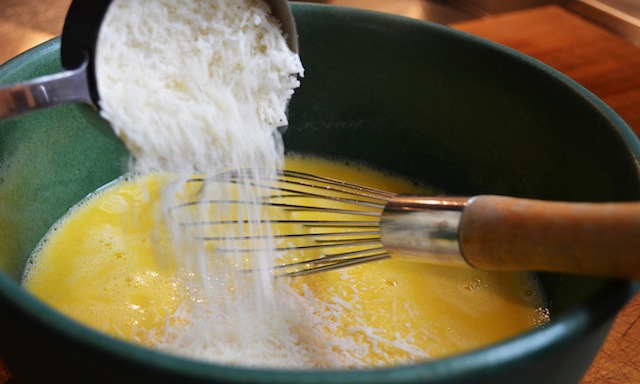 Unlike an omelet where the various add-ons are introduced to eggs that have already been cooked through, a frittata generally calls for folding your various savory ingredients into the uncooked egg mixture, then pouring the combo into your skillet and allowing the whole thing to bake together—first on the stove and then under the broiler. In the case of this recipe, however, it’s the cheese (or a portion of it, anyway) and the whole milk that’s added to the eggs, and the resulting eggy mixture that’s then introduced to the other ingredients. These include half a medium-sized onion that’s been chopped and allowed to cook over medium heat alongside a ½ lb of fresh chorizo sausage (removed from its casings) for eight minutes or so, or until the onion is tender, the meat is brown, and your tongue is hanging out of your mouth because the combination smells so good. To this you add your pile of chopped broccoli rabe—seasoned generously with salt and pepper—a sizable mound that’s likely to push your skillet to capacity and make stirring a challenge (if so, introduce the greens in increments, adding the remainder as it cooks down). 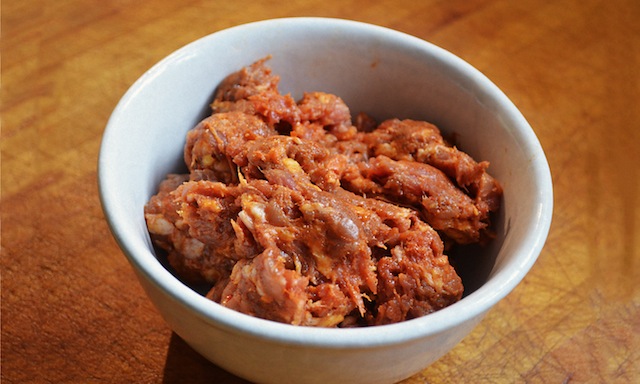 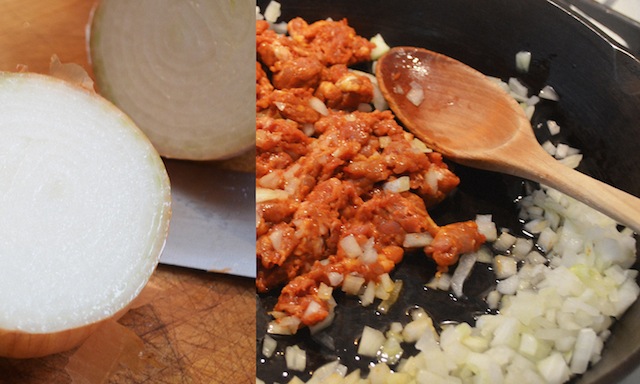 Once the greens are tender (including the thick, stalky bits)—a state that will also mean the entire combination is now sitting comfortably in your pan—it’s time to reduce the heat to low and add the eggs, pouring the mixture evenly across the surface of the sautéed sausage and broccoli rabe. At this point you can pretty much step back and read the Sunday papers for a while, since the secret to a frittata is slow cooking. Here that means a relatively long 10 to 12 minutes, a period during which the contents of the pan will require nothing more from you than the occasional shake to discourage sticking. Once the edges are just set, sprinkle the surface with the remaining cheese and slide your pan under the broiler for four minutes or so, until the top of the frittata is golden brown and the center is set. Remove from the oven, slice, and serve—either warm or at room temperature. Which brings me to one of the distinct advantages of a frittata over other breakfast egg dishes: because of its baked, quiche-like quality, it doesn’t have to be eaten right out of the oven, but can be enjoyed hours, even a day, later. (Anyone for leftovers?).

And regarding my switch from cheddar to Manchego, I made the substitution for the simple reason that I’m leaning towards sheep’s- over cow’s-milk cheeses these days—and also because I love the nutty, salty flavor of Manchego (which I just happened to have a quantity of in the fridge). Cheddar will probably melt a little better, and no doubt it will imbue the finished dish with a sunnier, more lustrous appearance, but I liked the subtle, salty kick offered by the Manchego. Either way, the net result is a healthy, homey breakfast that can feed a crowd… or in my case, two over-eaters. 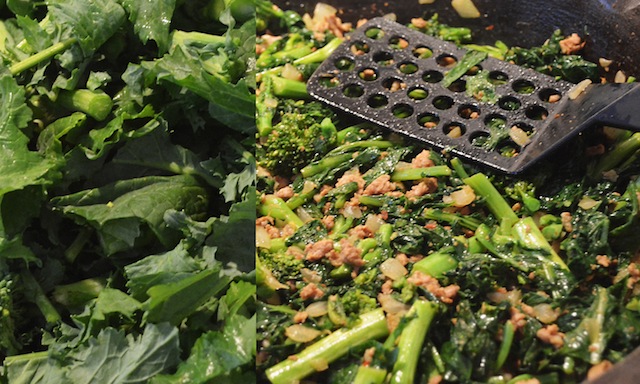 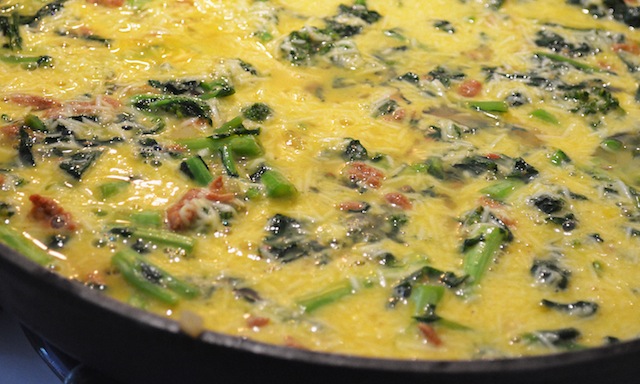 Directions:
—Preheat broiler. Whisk eggs and milk in a medium bowl. Mix in ½ cup cheddar; season with salt and pepper and set aside.
—Heat oil in a large skillet, preferably cast-iron, over medium heat. Add onion and chorizo and cook, stirring occasionally, until onion is softened and chorizo is brown, 6 to 8 minutes.
—Add broccoli rabe; season with salt and pepper and cook, stirring occasionally, until tender, 8 to 10 minutes longer.
—Reduce heat to low and pour reserved egg mixture over vegetables. Cook, shaking pan occasionally, until edges are just set, 10 to 12 minutes.
—Top frittata with remaining ¼ cup cheddar; broil until top is golden brown and center is set, about 4 minutes longer.
—Cut frittata into wedges and serve warm or at room temperature.
—Note: Frittata can be made 2 hours ahead. Let cool, then cover. 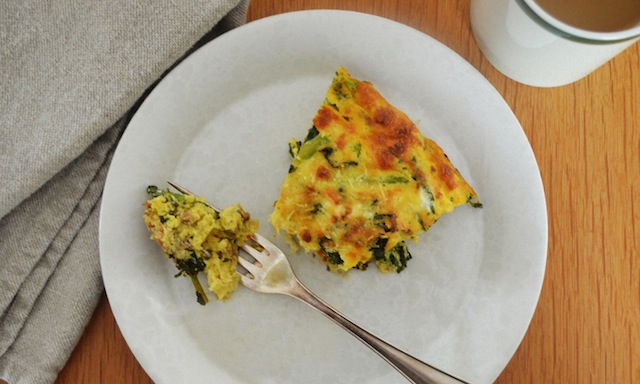