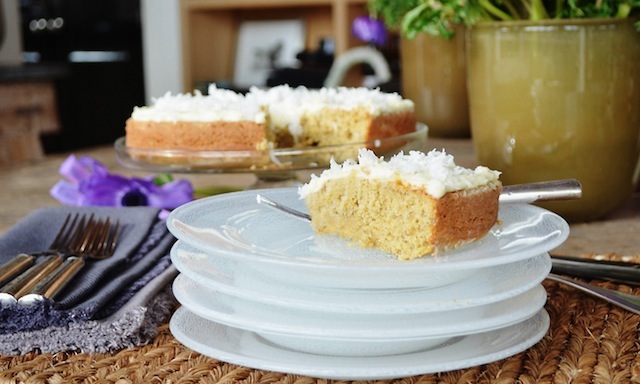 For much of my life, coconut has been among the small list of foods I felt certain would never win me over. It’s an exclusive group that also boasts liver of any kind (I do make an exception where pate or terrine is concerned), anything that falls in the offal category (“awful” is more apt), and anchovies. In other words, it’s a tidy little list and as such one I felt was perfectly okay to never reconsider. And I probably wouldn’t have, if not for the fact that all of these items can be quite persistent where one’s diet is concerned. Anchovies, for instance, have a tendency to show up on my pizzas and Caesar salads whether I ask for them or not, only making their surprise presence known once they reach my mouth. In their case, the verdict has been as consistent as it has been unanimous: I just don’t like them. But coconut has proved a different story.

Of course, coconut is less of a stealth ingredient than anchovy, which has a way of camouflaging itself as a mushroom or a pepper, or of masquerading as a perfectly benign salad dressing. No, coconut is one of those items that tends to announce itself either visually or in name, so if its presence has not been made known by the menu (“coconut sorbet!,” “coconut cream pie!”), then the general topography of the dish eliminates the possibility of any confusion — it simply looks like coconut. All of which is a long way of saying that where this particular ingredient is concerned, I made a conscious decision to give it another try. And the reason for this was simple: on one memorable occasion it simply looked too good to pass up. 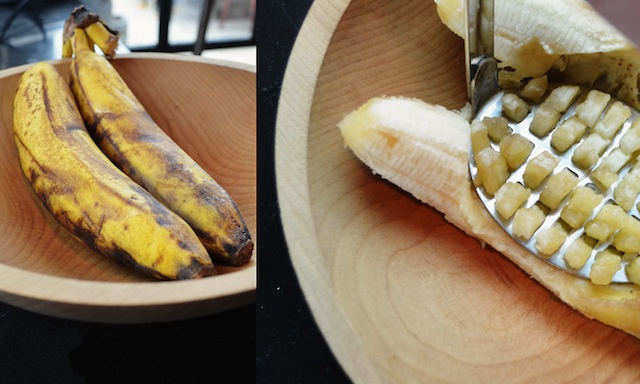 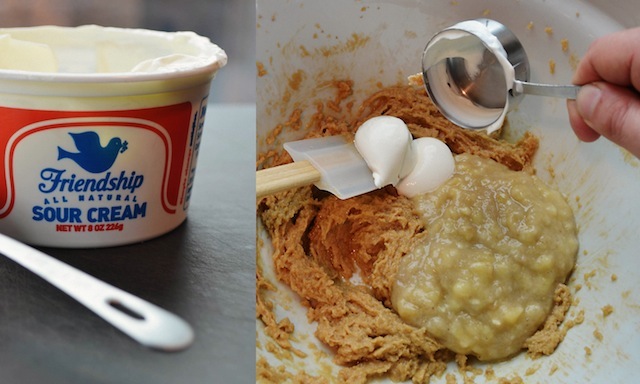 That in and of itself was a revelation, because coconut had never before had that effect on me. Of course, the circumstances were unlike any I’d encountered before where the fruit was concerned — a vacation in the Caribbean, a good meal at a romantic water-side restaurant, and a slice of something advertised as “coconut tart” that didn’t show up all dry and milky-looking like the interior of a Mars bar, but instead arrived as a burnished golden brown, glistening with sugar and butter. Now this was something worth investigating. Which is what I did, and which is why today I have one less thing on my “um, … no thanks” list.

That tart, of course, was made with fresh coconut, which in flavor and texture is as far from the packaged variety as a homegrown tomato is from canned tomato sauce. But it opened my eyes to the possibility that maybe, under the right circumstances, and alongside the right other ingredients, coconut — fresh or packaged — was something I could actually enjoy. And so slowly, over the years, I’ve put this theory to the test, gradually replacing my bias with an increasing number of recipes and dining experiences that make me, if not quite a full-time coconut lover, than at least someone who recognizes its potential to sweep me off my feet.

Which is exactly what this week’s recipe for banana cake with coconut icing did to me. Admittedly, it wasn’t the presence of the coconut that compelled me to tear the recipe out of Gourmet seven years ago, but rather the fact that it was to be spread across the surface of a low-lying and seductively simple banana cake. Because unlike coconut, banana — especially in cake-, pudding-, or ice cream-form — is something I’ve always appreciated. In fact, since my discovery of the recipe was one that predated my coconut revelation, it’s a cake I’ve made on a number of occasions without the prescribed coconut frosting, replacing it instead with a coconut-free butter cream variety, and even with the tea based icing featured in last month’s tea story. It’s been a consistent crowd-pleaser in each of those instances, just as I’m sure it would be with just a sprinkling of powdered sugar, or without out anything at all. Banana makes for a wonderfully moist cake and this one is no exception, aided in part by the presence of several dollops of sour cream. 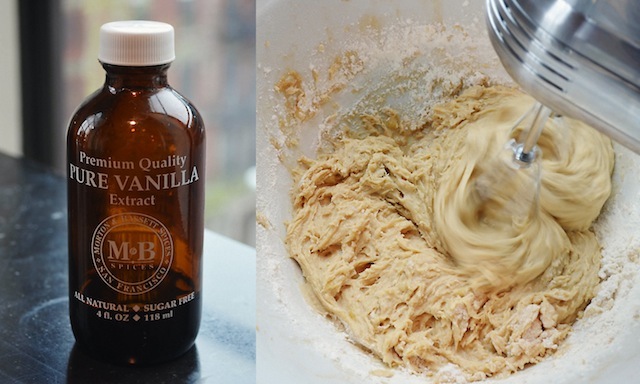 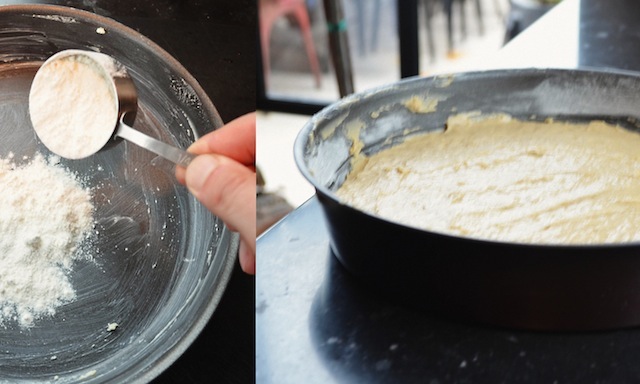 And it couldn’t be simpler. The key is to use very ripe bananas (critical for both flavor and consistency; two are generally enough to achieve the quantity called for by the recipe), which is added to a puree of butter, brown sugar, and egg. Once the mashed banana is incorporated into the mixture, the sour cream and a small amount of vanilla is introduced, followed by the various dry ingredients — the flour, the baking soda and baking powder, and a small amount of salt. This somewhat gluey combo is then poured into a 9” cake pan (you have to fight a little to make the batter stay to the sides of the pan, which I took as a promise of the light springy cake to come) and then baked in a 350 degree oven for 20 to 25 minutes, or until a cake tester comes out clean. Easy. And so good. As promised by the consistency of the batter, the cake is moist and bouncy, with a dense wet crumb that’s a little like a pudding cake. But it’s the confection’s warm banana flavor, deepened by the presence of brown sugar, that makes it so hard to stop eating.

And with the prescribed coconut icing it’s even better. This is a simple mixture of cream cheese, butter, confectioners sugar, and canned (or jarred) coconut puree that’s then topped with a dusting of shaved coconut — in other words, a classic cream cheese frosting but one that, thanks to the mellowing presence of the coconut puree, manages not to give you a toothache. (You can also add a teaspoon of dark rum if you like, though I prefer it without.) What’s more, the icing’s sugar quotient is ideally calibrated to the cake’s more mild brand of sweetness, while the tropical flavors of the banana and the coconut are a perfect pairing, not to mention a promise of the warm days to come. In fact, the combo is so good, I look forward to making it for anyone who claims to not like coconut, then watching their eyes open to the possibilities, just as mine did. 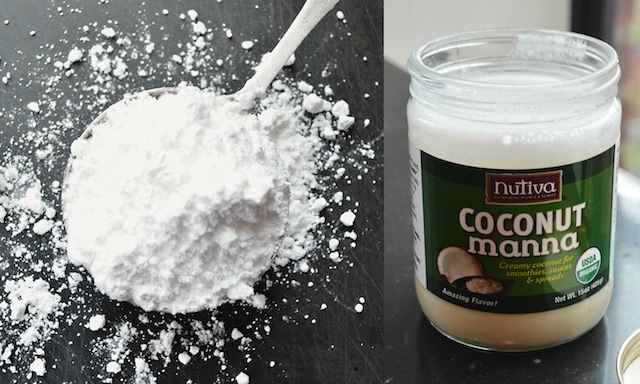 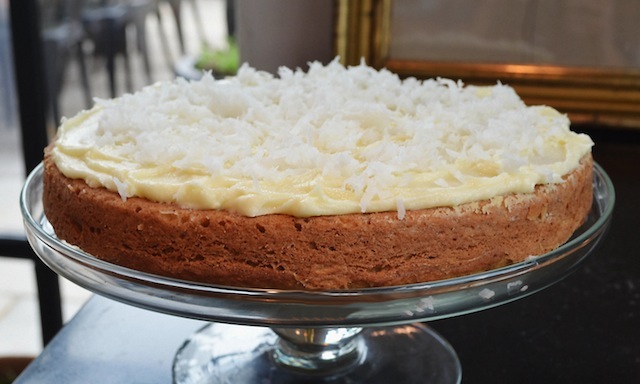 NOTE: Look for cream of coconut in the baking section of your supermarket. Gourmet suggests a brand called Coco Lopez that I couldn’t find, but Whole Foods has an organic variety called Coconut Manna that’s very good (you may have to insert the jar in a pan of hot water for ten minutes or so to loosen up the contents).

Directions for cake:
—Put oven rack in middle position and preheat oven to 350 degrees. Lightly butter and flour a 9” round cake pan, knocking out excess flour.
—Whisk together flour (1½ cups), baking powder, baking soda, and salt in a small bowl. Beat together butter (1 stick) and brown sugar in a large bowl with an electric mixer at high speed until pale and fluffy. Beat in egg until combined, then add mashed bananas, sour cream, and vanilla and beat until combined well. Reduce speed to low and add flour mixture, mixing until just incorporated. Spread batter in cake pan and bake until golden and a wooden pick or skewer inserted in center comes out clean, 20 to 25 minutes.
—Cool in pan on a rack 10 minutes. Run a thin knife around edge of pan, then invert rack over cake and invert cake onto rack to cool completely.

Directions for icing:
—While cake cools, beat together cream cheese and butter in a bowl using cleaned beaters at medium speed until smooth, Reduce speed to low, then add confectioners sugar, cream of coconut, and rum (if using) and mix until combined. Increase speed to high and beat until light and fluffy, about 2 minutes.
—Frost top of cooled cake and sprinkle with coconut. 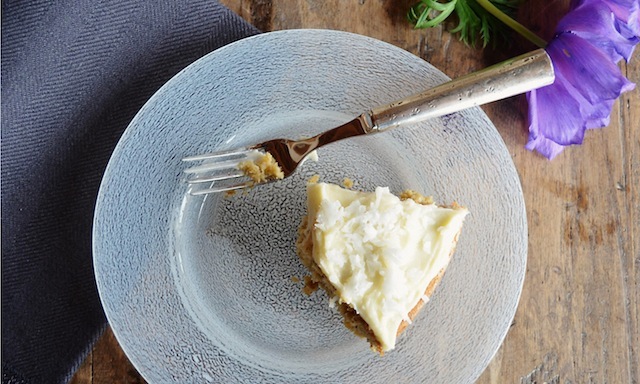