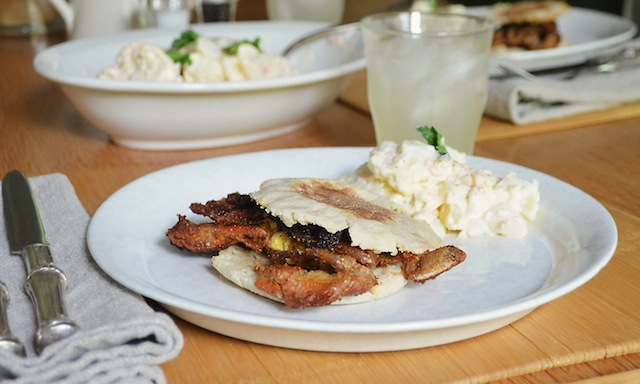 Sometimes a craving demands immediate satisfaction. In the case of a donut, or a piece of chocolate, or even a pastrami sandwich, often the easiest way to resolve this condition is by getting yourself to the nearest quality purveyor, loading up, and moving on—freed, at least temporarily, from that distracting state otherwise known as desire. There are certain occasions, however, when there’s no substitute for making it yourself, either because the experience of assembling and cooking is key to scratching this particular itch (I’d include chocolate chip cookies here), or simply because no one can make the item in question quite as satisfactorily as you can. This recipe for soft-shelled crabs falls into the latter category. It’s an adaptation of a recipe my mom has used for as long as I can remember, and one that she, in turn, adapted from a phonebook sized collection put out by Gourmet in the early ’70s. Tellingly, she’s always claimed that once she found this recipe she gradually gave up ordering soft-shells in restaurants, for the simple reason that no preparation ever came close to this one. I have to agree with her. 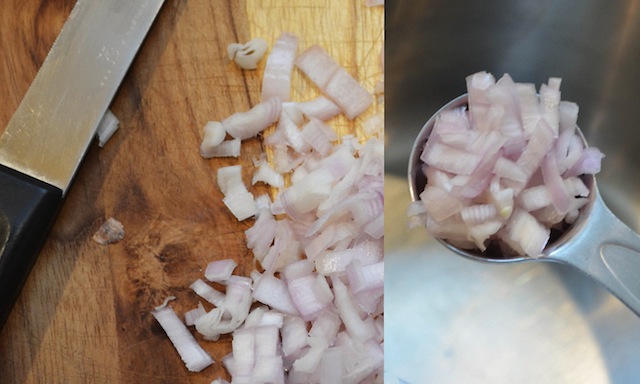 That being said, a few words about soft-shelled crabs are probably in order. The first relates to the period within which they’re available, one I’ve always thought of as a few short months straddling late spring and early summer, but that a quick search of the Internet revealed to be considerably longer—stretching all the way through September, or beyond. And a handful of minor details you may, or may not, be interested in: the best variety come from Maryland; that “soft-shell” is actually an immature shell exposed by the molting of the original one (making me think I might now be singled out by PETA for promoting their consumption!); and only the blue crab is suitable for eating at this stage.

The one other fact you need to know is that the arrival of warm weather often sets off in me a soft-shell hankering. That has certainly been the case this year, but with a slight variation—what I was after was a sandwich. 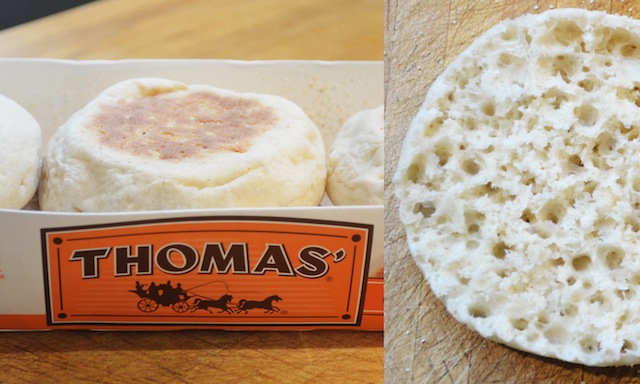 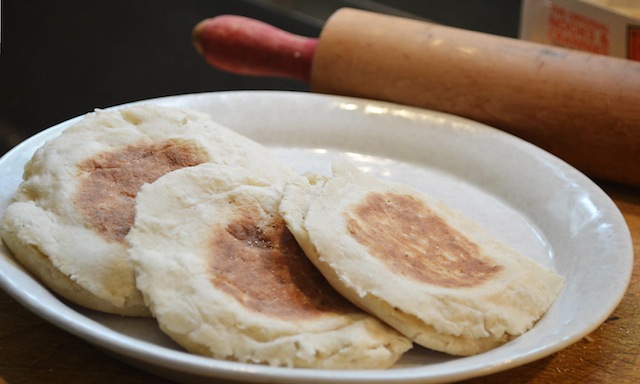 That sandwich piece presented a few questions, namely what kind of bread to use and what sort of condiments (if any) were called for. But let’s circle back to those details a little later and begin with the most important component of all—the crab itself. Having partaken of my mom’s recipe over the course of many years, I knew this treatment would be just the ticket here. For one thing, it doesn’t try to transform the crab into something else but simply aims to elevate its texture and flavor with a little breading (breadcrumbs mixed with a dash of chili powder, for some subtle heat), a quick sauté (8 minutes total), and a light saucing. This last is a simple mixture made up of tarragon vinegar, fresh parsley, and a dash of Worcestershire sauce, all of it swirled in the same pan in which the crab has cooked, thereby integrating the buttery residue from the sauté into the sauce. It’s a bright zesty combination that this circa 1972 recipe defines as “á la diable” (defined as a basic butter sauce enhanced by wine, vinegar, shallots, and seasonings), and that I credit with this dish’s lip-smacking success. (So lip smacking, in fact, that my mom’s one change to the original recipe was to double the quantities for the various ingredients needed for the sauce, changes reflected in the details listed below.) In combination with the crab’s natural juices and fresh from the sea flavor, it’s a mingling of flavors that’s sort of miraculous—the sort of thing that can start you thinking about how much you’ve always loved Chesapeake Bay, even if you’ve never been there.

As for the sandwich, after rejecting both potato and brioche rolls as being too bready, I landed on an English muffin—flattened with a rolling pin and moistened with a shallot and herb butter. Both details were ones I picked up from another old Gourmet recipe, this one found in a 1981 edition of the magazine, and they proved just the ticket to complete the recipe. Unlike a burger or a grilled chicken sandwich, the pleasing texture of the crab here calls out for a more low-lying package—one that won’t muffle what’s essentially this sandwich’s greatest selling-point: its crunch. That quality is precisely what the grilled English muffin provides, sandwiching the crab between layers of bread that only enhance the crackle. What’s more, thanks to the muffin’s famous nooks and crannies, it manages to trap all those previously mentioned juices without getting soggy. (By the way, that rolling pin exercise is for no other purpose than to enlarge the muffin’s proportions to match those of the crab, so if you can find the extra large muffins they sometimes sell for hamburgers, go for those and skip this step.) 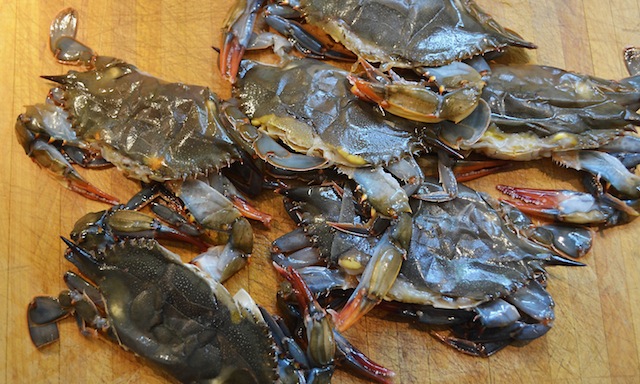 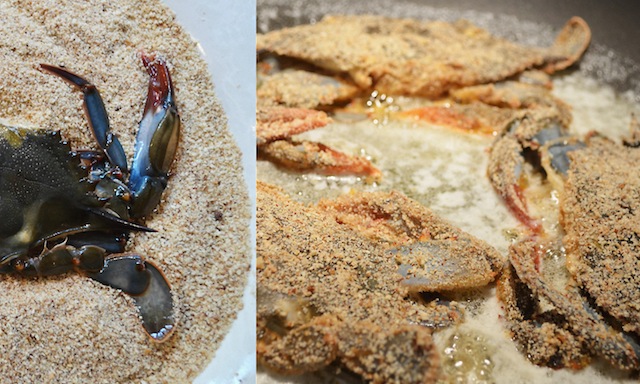 Either way, once grilled and lightly browned, each side of the cut muffin is brushed with a mixture of melted butter, a little lemon juice, and a few tablespoons of minced shallot and parsley. Admittedly, given the sauce already spooned across the crab, some might argue that this is a case of gilding the lily. To my way of thinking, however, it’s the perfect compliment to both the bread and the crab, offering one more note of tangy richness to frame the uniquely summery flavor of the crab. Between this, its irresistible crunch, and the bronzed, seductive glow of the sautéed crab, the combination is pretty exceptional—the kind of meal that can haunt you days, even years, later. Come to think of it, is that a craving I feel coming on?

Two final notes: The quantities listed below assume one crab per sandwich, and one sandwich per person. If you’re planning to serve the crab as an entrée, however, figure two crabs per person. (As written, the recipe can easily be doubled.) Lastly, to avoid the spattering (and associated ducking and weaving) that can occur when sautéing the crabs, puncture the legs and claws of the crab with the tines of a fork before introducing them to the frying pan. 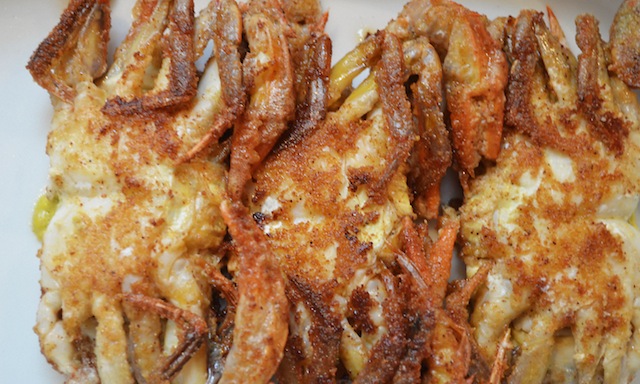 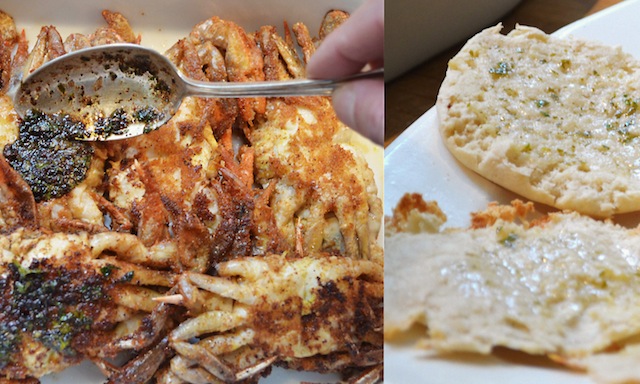 Directions:
—Warm a serving platter in a 350˚ oven. Mix breadcrumbs and chili powder in a shallow bowl. Set aside.
—Split English muffins and flatten with a rolling pin. Grill in oven, turning once, until crisp and lightly browned (about ten minutes). Meanwhile, place butter, lemon juice, parsley, shallot, and salt and pepper to taste in a small saucepan and heat over low heat, stirring occasionally, until butter is just melted. Set aside.
—Pat crabs dry, puncture legs and claws with the tines of a fork (to eliminate popping and spattering while cooking), and dredge in breadcrumb mixture. Melt butter in a 12” sauté pan and sauté the crabs back side down for 5 minutes, then turn and sauté for 3 minutes longer. Place crabs on a heated serving platter and set aside.
—In the same pan as you cooked the crabs (and without wiping out the pan) add the tarragon vinegar, the chopped parsley, and the Worcestershire sauce to the pan juices and brown bits. Mix well and spoon evenly over the crabs.
—Brush split sides of the grilled muffin with the reserved butter and place 1 grilled crab between the two halves of bread. Serve with lemon wedge.

Serves 6
(Note: If not using the crab for sandwiches, plan on two per person—just double the crab related ingredients above and cook in two batches, with the first six kept warm on the heated serving platter.) 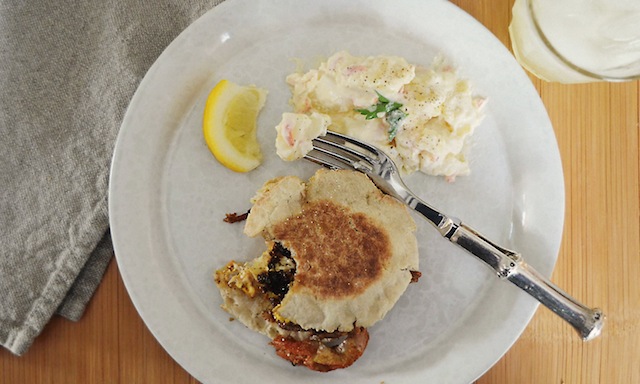