With Thanksgiving still in the rearview mirror and the double header of Christmas/New Year’s looming on the horizon, food has been on my mind a lot lately. Actually, since food is pretty much always on my mind, perhaps I should say that it’s been on my mind more urgently lately. “Urgently” both because this is the time of year when I feel compelled to turn out somewhat more elaborate meals for somewhat larger numbers than usual, and also because I want to be certain to share with you the kinds of cooking suggestions that feel both seasonally appropriate and genuinely useful (I mean, does anyone really need another roast beef recipe at this point?).

Having said all that, I now feel obliged to confess that rather than turning out the usual multi-platter extravaganza for Thanksgiving this year, we decided to skip town — for a responsibility-free week in the decidedly un-home-for-the-holidays setting of St. Barts. So instead of brining an eighteen-pound bird in a bucket of salt water, I brined myself in the turquoise waters of Saline beach. Bliss… Though truthfully I kind of missed the ritual of two days of beat-the-clock cooking with my mom, just as I did the resulting meal — my favorite of the year. No complaints from me about eating dry, restaurant-produced turkey with my toes buried in the sand, but the French just don’t get Thanksgiving. Case in point: the cranberry sauce/gravy mixture that was served with our meal. Cool, I thought, some hot young chef’s been crushing our holiday playbook! And then I took a taste. Uh, no — some hot young chef simply made a mistake. 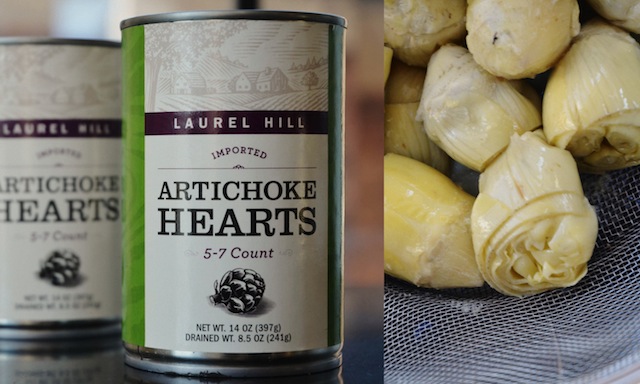 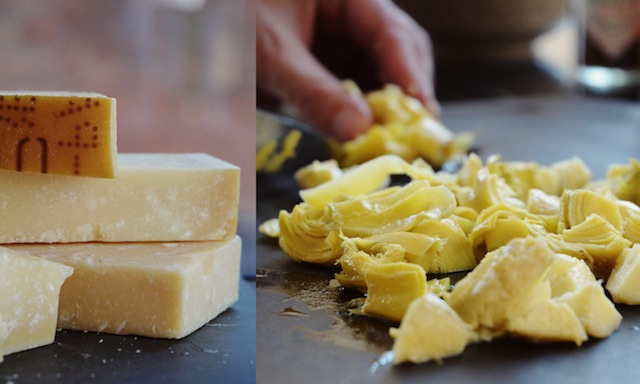 Anyway, even if I haven’t cooked that much in the last few weeks, the things I’d like to be eating (and that I’d like to be serving) are very much front and center in my cerebral cortex at the moment. I count this artichoke and Parmesan cheese dip high up on that list. Actually, “dip” here is a bit of a misnomer, since it’s really more of a spread — a compulsively eatable, can’t-stop-until-it’s-completely-gone spread. It’s also one of those dishes where it’s best not to give the actual ingredients much thought, since, with the exception of a good deal of Parmesan cheese, there’s nothing particularly impressive on the list, and even a few things that may make you wonder whether perhaps it might all be one great big mistake. (Two cups of mayonnaise? Really?) Yes, really — and really good, too.

The recipe comes from A Taste of Tradition: Favorite Recipes from the Petock Family, which is not a title you’ll find on Amazon. Rather, it’s a collection of family recipes that was put together by a distant relative in Norfolk, Virginia, who passed it on to my grandmother, who in turn bequeathed it to my mom. Now with all due respect to my many relatives in Norfolk, theirs is not a town known for its exceptional food tradition. (Though it is home to Doumar’s, which can rightfully lay claim to one of the best minced pork sandwiches in the country). Nor is there anything particularly southern about the recipe, with the possible exception of all that mayonnaise. In fact, the dish is one my mom was first introduced to through a French catering company in Philadelphia — a recipe she repeatedly tried, and failed, to replicate after they left town. Enter this slim volume of family recipes, which unaccountably, and serendipitously, included the very one she’d been searching for. 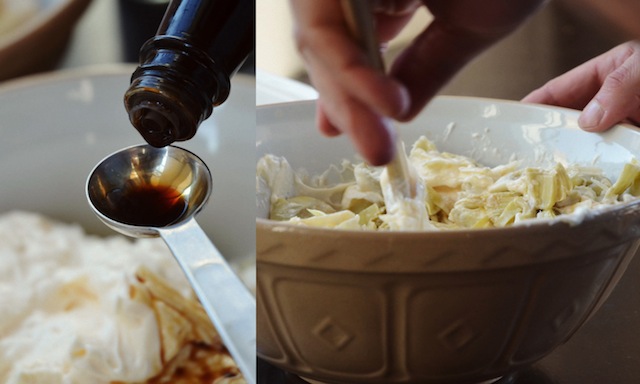 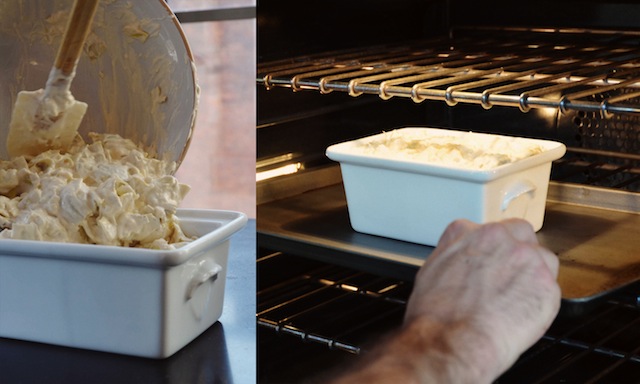 The first thing you need to know about the dish (other than its aforementioned addictive quality) is that it’s ridiculously easy to prepare — like ten-minutes-of-prep-and-a-half-hour-in-the-oven easy. A little chopping (the artichokes), a little grating (the cheese), a little measuring and mixing, and presto: ready for baking. In fact, the most challenging aspect of the entire process may well be resisting the siren-like call of the salty, cheesy fragrance emanating from your oven, which starts long before the requisite cooking time is up. Don’t give in to temptation, though — you’ll want to make sure the top is all golden brown and pizza-like before diving in.

The other thing you need to know is that the cheese is the dominant flavor here, so even if mayonnaise makes your skin crawl (I live on the stuff but many I know can’t abide it), and even if you think canned artichoke hearts have no redeeming qualities, you won’t be disappointed here. For starters the mayonnaise functions more as textural component than a flavoring one. This means that it takes on a kind of molten, cheesy deliciousness thanks to the Parmesan, all of which is brightened, and deepened, by the addition of the garlic powder, and the Worcestershire and Tobasco sauces. Just be sure to use a good quality Parmesan, and to grate it on the large openings of your grater (go too fine and you’ll forfeit the desired creaminess).

As for the artichoke hearts, these give the spread some all-important heft, while also imbuing the mixture with just the right acidic kick — critical in the company of all that cheese and mayo. And while you should obviously use the best canned-variety you can find, thanks to the various other ingredients present, even the blandest of artichokes is magically transformed into something bright and flavorful here. Who knew that the secret to achieving true artichoke flavor lay in the simple addition of Parmesan cheese and Worcestershire sauce?

Served on lightly toasted baguette slices along with a glass of something chilled and there can be no mistaking it — the holidays have arrived.

Directions:
—Preheat oven to 350 degrees. Gently combine ingredients in a large bowl, then pour into a bake and serve dish. Place on a cookie sheet (to catch any drips) and bake on middle rack of oven until golden brown and bubbling, about 30 to 35 minutes.
—Serve with lightly toasted baguette slices. 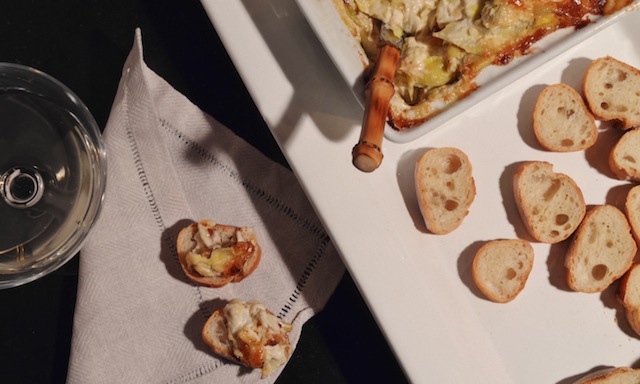